A huge fire is ripping through a block of flats in Bournemouth today, with footage from the scene showing flames leaping from the roof before collapsing inwards.

Firefighters are currently battling the blaze, which broke out in a third floor flat this afternoon, forcing residents to evacuate.

Black smoke could also be seen rising from the building on Holdenhurst Road in the seaside town. The road is expected to be closed off for some time.

The fire has reportedly been raging for more than five hours, with witnesses saying that it has now spread further across the roof of the building.

Rescue services, which have been stretched today as thousands of people descended on the south coast, have confirmed that no one was hurt in the fire.

Flames could be seen spreading across the roof of the building in Bournemouth as firefighters sprayed water down from above. The building was evacuated earlier

‘Holdenhurst Road in Bournemouth is full of fire appliances as crews deal with a flat fire,’ Dorset and Wiltshire Fire and Rescue Service posted on Twitter.

‘Everyone’s safe but there are road closures in place, so avoid going in and out of Bournemouth by the Asda roundabout!’

The call came into the emergency services at around 4pm, after which police urged people to avoid the area until it is reopened.

Jean-Luc Carden, who lives near the scene of the incident, told the Bournemouth Echo: ‘I went outside for a cigarette about 30 minutes ago and saw all the smoke billowing from the flats on top of the building. 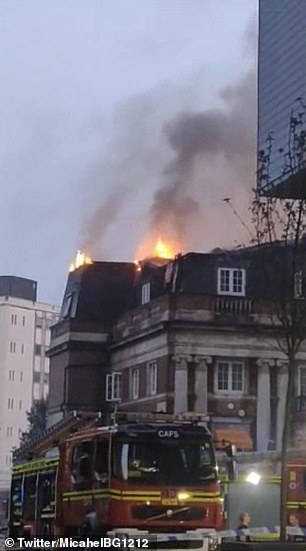 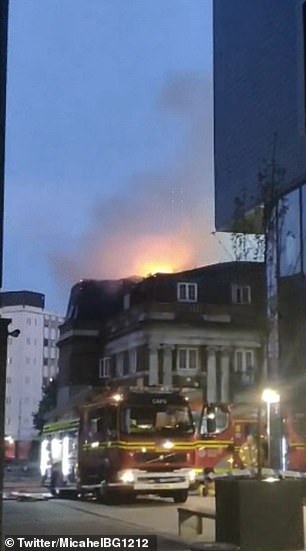 Witnesses at street level could see flames rising from the building as firefighters battled the blaze. Emergency services confirmed that no one has been harmed in the fire

‘Half of the roof has now caved in and there are still flames at the back of the building.’

He added: ‘I have been at the top of my building for about 30 minutes now and it looks like it got worse in that time worse. The road is completely shut from the job centre to the actual building (where the fire is).’

Another witness on Twitter said that at least half of the roof had fallen in, and that they could see inside the building their position.

Dorset Police wrote in a statement: ‘Officers are at the scene to assist the fire service with road closures and to help evacuate nearby properties.

‘There are no reports of any injuries or people trapped.’