A search is underway for a person who could have deliberately set fire to some unburnt vegetation on South Australia’s bushfire-ravaged Kangaroo Island.

Just before 5am on Thursday, emergency services personnel spotted a new fire within an already burnt pine plantation along Pioneer Bend Road.

‘Of concern is that they believed they saw a person adjacent to the fire and that person could have been deliberately setting fire to some unburnt vegetation,’ police said in a statement.

‘This action did not result in any damage as it quickly self-extinguished.’

A police officer also saw a torchlight in the same area as the person was seen. 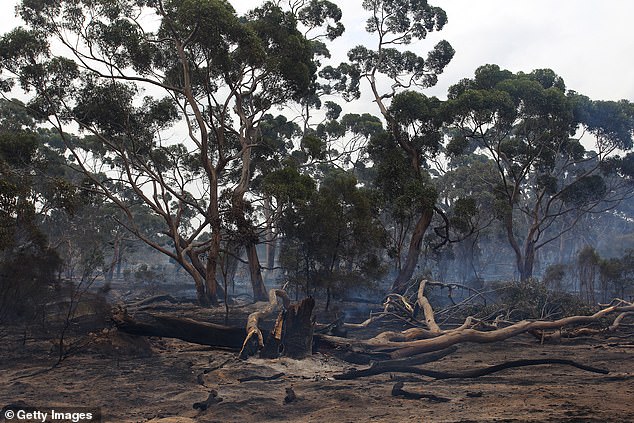 A comprehensive search was undertaken, but the person was not found.

The Country Fire Service is continuing to monitor flare ups from the Kangaroo Island blaze, which could burn for another two weeks.

It has already charred more than through 210,000 hectares inside a 588-kilometre perimeter, destroying 65 homes and hundreds more buildings.

Tens of thousands of livestock and hundreds of unique bee hives were destroyed when the island was ravaged by fires.

More than 32,000 sheep losses had been reported to Primary Industries and Regions SA, along with 517 cattle, 65 alpacas and five horses.