An area of around 370 acres (1.5 sq km) burning on Saddleworth Moor in West Yorkshire could be seen for miles around as witnesses described the ‘terrible’ scene of fire coming close to buildings high on the moorland.

Five fire engines and two specialist moorland firefighting units were at the scene, with incident commander Laura Boocock admitting it was one of the biggest grass fires she had ever seen, but it was ‘nothing they can’t handle’.

The blaze near Marsden started at 7.30pm and quickly spread to cover 250 acres, forcing the closure of the A62.  Witness Harry Broughton tweeted: “Never seen anything like this – had a drive up as these things look terrible.’

Elsewhere, in East Sussex two fires started within an hour at Ashdown Forest as several huge blazes broke out around the country yesterday amid the unprecedented February weather that saw temperatures hit 21C (70F).

A large wildfire burns on Saddleworth Moor near Marsden in West Yorkshire last night. Plumes of smoke were visible for miles 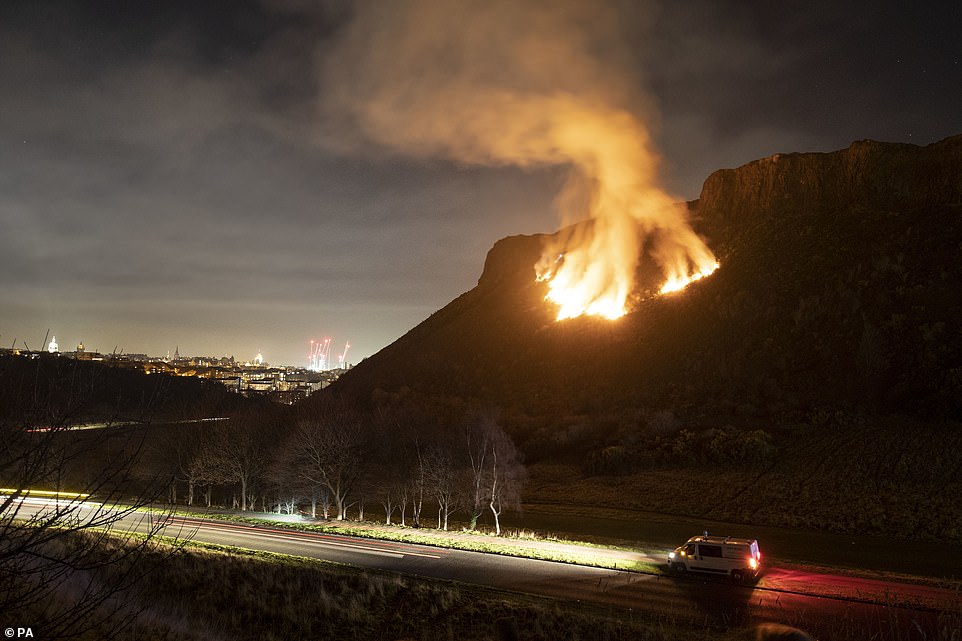 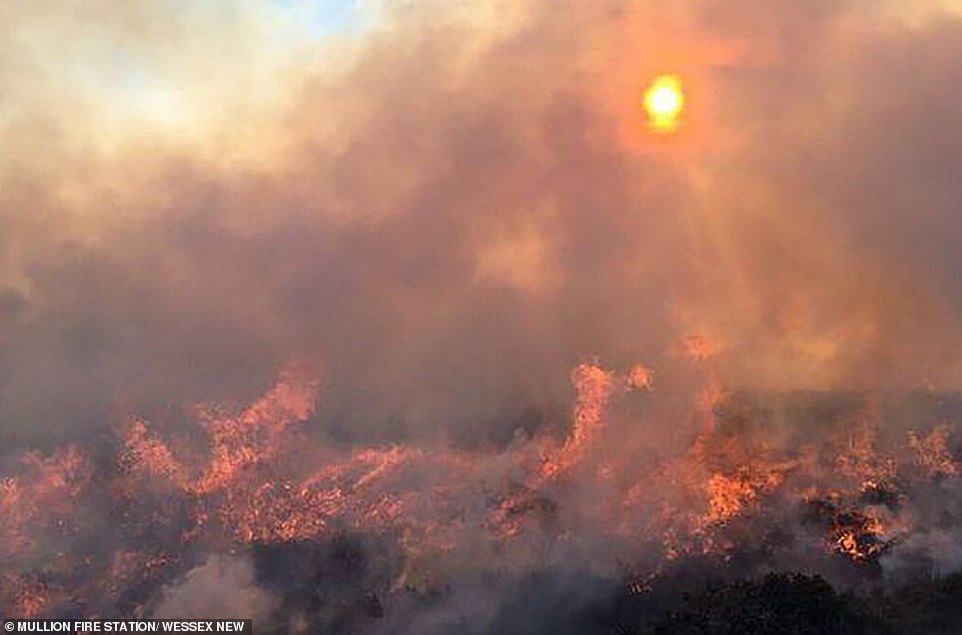 Crews said more than 86 acres of the forest which inspired Hundred Acre Wood in AA Milne’s children’s classic Winnie the Pooh – the size of 35 rugby pitches – were engulfed and 65 officers battled the flames.

It came as UK temperature records were broken for the second time in two days yesterday when the mercury hit 21.2C (70.2F) at Kew Gardens in West London.

It was the first time a temperature of more than 21C (70F) has been recorded in Britain in the winter months of December, January and February. The hottest place in Scotland was Balmoral, Aberdeenshire, at 17.2C (63F).

Meanwhile, fires continued to burn as a dramatic wildfire hit Arthur’s Seat in Edinburgh. Photographs showed the iconic landmark below Salisbury Crags at Holyrood Park alight as flames and smoke billowed into the sky.

Two fire appliances were called out to deal with the incident, which saw an expanse of gorse ablaze. The Scottish Fire and Rescue Service said a report of the fire was received just before 6.30pm.

Another gorse fire set light to a hillside near Betws yn Rhos, North Wales, and arsonists were blamed for a further blaze at The Lizard in Cornwall. Firefighters also tackled a fire on moorland near Blacko, Lancashire. 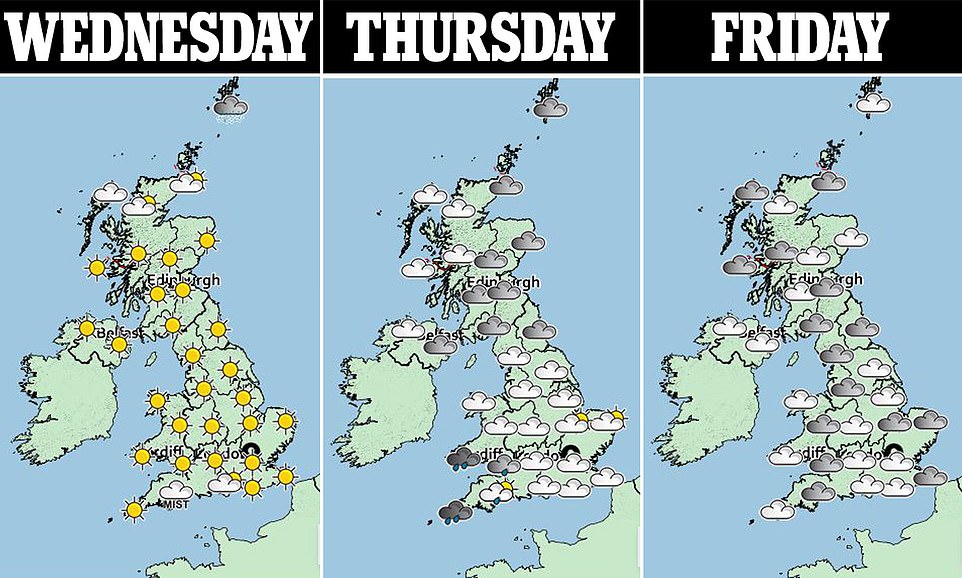 The warm sunshine in Britain yesterday contrasted with cloudy conditions around the Mediterranean. Rome was only 14C (57F) and Malaga on Spain’s Costa del Sol was 16C (61F).

Why is it so hot in Britain?

Britain has experienced an extraordinary few days of record-breaking temperatures for February.

The exceptionally warm weather is thanks to a block weather pattern which is dragging up warm air from the Canary Islands, Morocco and southern Spain.

The pattern is a large area of high pressure that moves in a clockwise direction bringing warm winds from the Canaries, meaning more sunlight.

The dry ground needs less energy to heat up and so it is becoming hotter more easily – which makes it very warm when combined with the southern air flow.

Conditions in Wales – which has recorded temperatures above 20C (68F) two days in a row – are being supercharged by the ‘Foehn Effect’ phenomenon.

This is where moist air dries out as it hits hills or mountains, allowing temperatures to rise further as the air comes down the other side.

Meanwhile, conversely, temperatures in the usually warm Mediterranean have plunged.

In Thessaloniki in Greece, it hovered at around 3C (37F) and the area has even had snow, as have parts of Northwest Turkey that also saw wintery flurries.

The culprits are areas of low pressure over the Atlantic and Eastern Europe, trapping warm air over the northwest of the continent.

More very mild and sunny weather is expected for the UK today, with temperatures due to reach a maximum of 19C (66F) in the South East and 16C (61F) elsewhere.

But forecasters warn that the warm spell is coming to an end, with wet and windy conditions set to sweep in for the weekend.

Based on figures for up to Monday, this month has been the fifth warmest February since records began in 1910. This month could rise further up the rankings as temperatures for the remaining two days remain above average.

The UK record for the highest winter temperature was first broken on Monday, when Trawsgoed in Ceredigion, West Wales, reached 20.3C (68.5F). This beat the previous all-time February record of 19.7C (67.4F) in Greenwich, South East London, in 1998.

The warm weather is bringing animals, including hedgehogs, out of hibernation, while the RSPB says it has received reports of birds attempting to nest and breed.

There have been reports of ducklings, butterflies emerging, and the early arrival of migrant birds such as swallows and house martins.

Martin Harper, director of global conservation for the RSPB, voiced concern about the impact on plants and animals once conditions return to normal.

He said: ‘While the warm weather, bright sunshine and abundant sights and sounds of nature undoubtedly make us all feel better, they should also ring alarm bells.

‘The early signs of spring are likely down to climate change, which is bad news for us all. 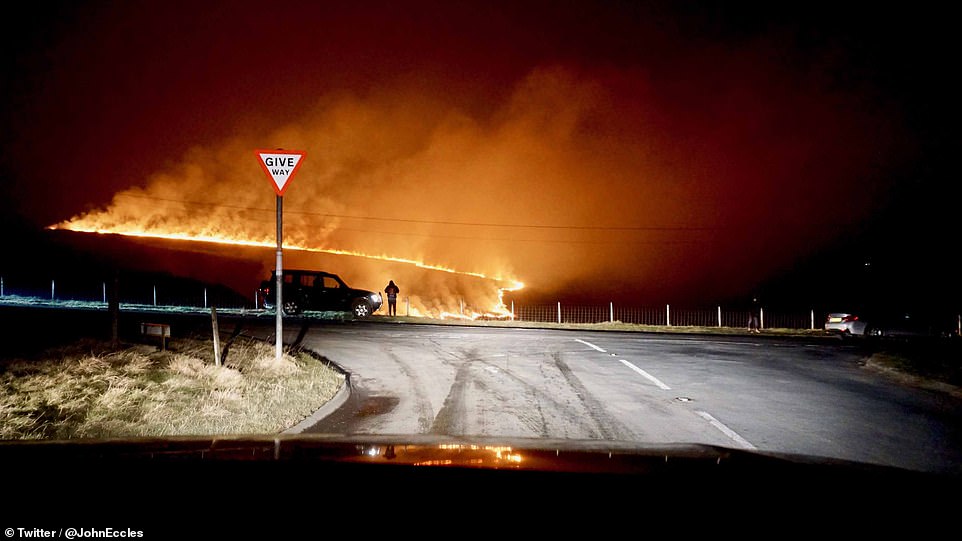 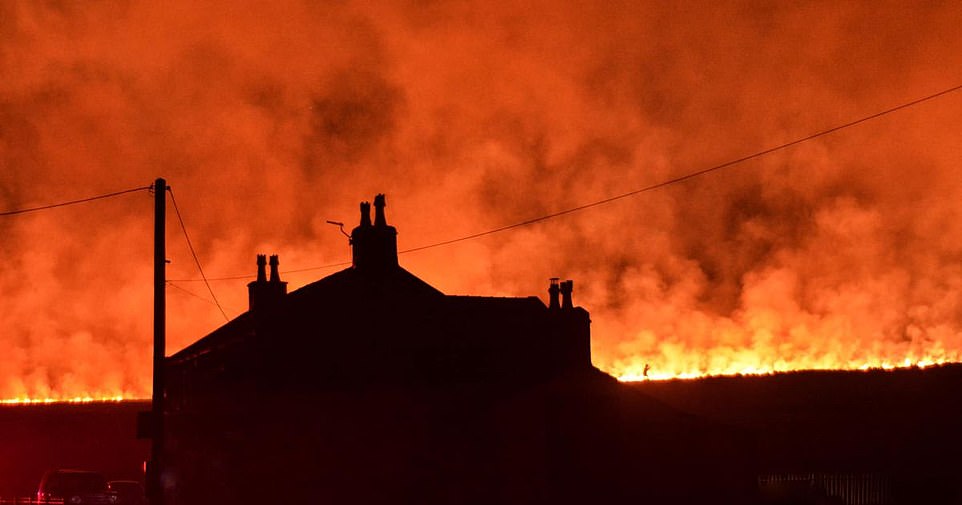 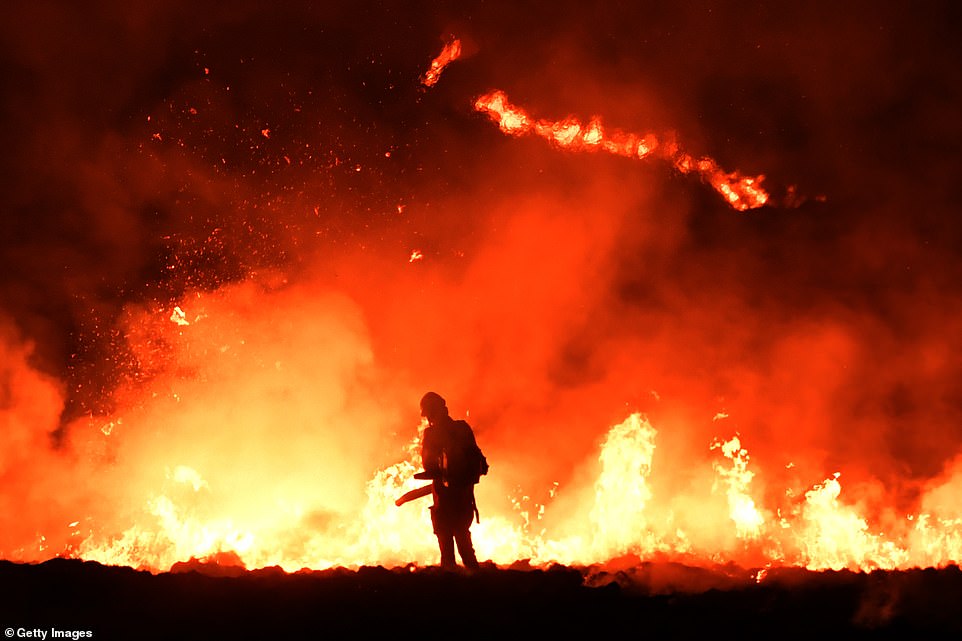 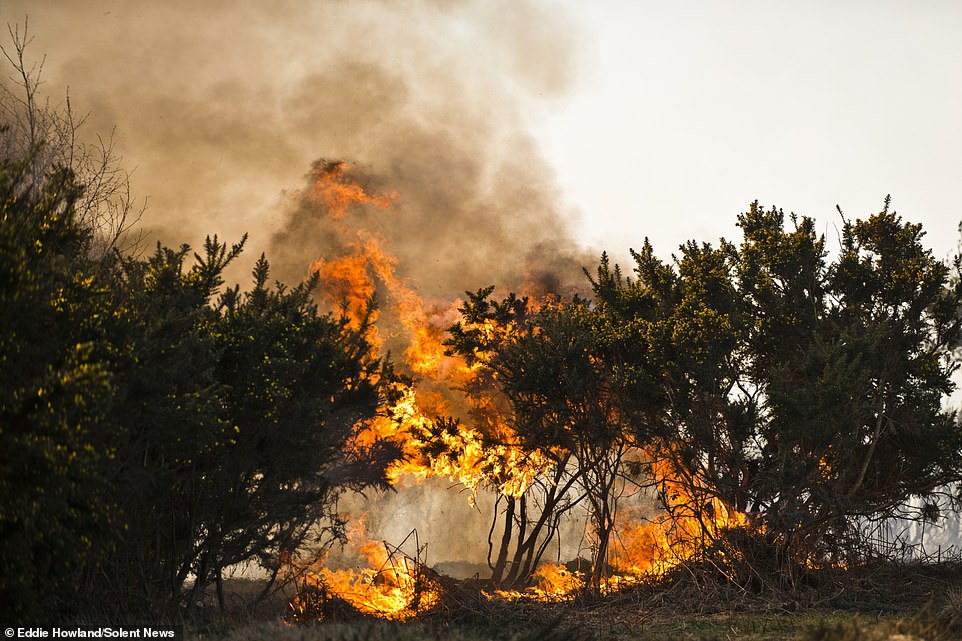 ‘As we expect the weather to return to temperatures more traditionally associated with this time of year – as they are forecast to – then there could be a real crisis for our birds, insects and other wildlife.’

How do wildfires start?

Grass fires can develop quickly in dry conditions and raised winds with the possibility of quickly spreading.

They are often caused deliberately by people, but can also happen when controlled fires get out of hand.

North Wales Fire and Rescue Service said deliberate mountain fires have a ‘hugely detrimental’ impact on wildlife and the environment.

When road access is not possible to fight them, then they are often left to burn themselves out.

As a result of the warm weather, the Royal Horticultural Society said magnolias at its gardens in Wisley, Surrey, and Rosemoor, Devon, are already in full flower more than a month early.

An almond tree is also in bloom weeks early at Wisley, while willow trees are coming into leaf when buds do not usually open until April.

Mr Barter said flowers such as magnolia are vulnerable to frost but other early blooms, such as daffodils and crocuses are not.

Although the warm weather is likely to be over soon, Mr Barter said a lack of imminent very cold weather could still bode well for spring flowers. No significant cold spell is predicted over the coming month. 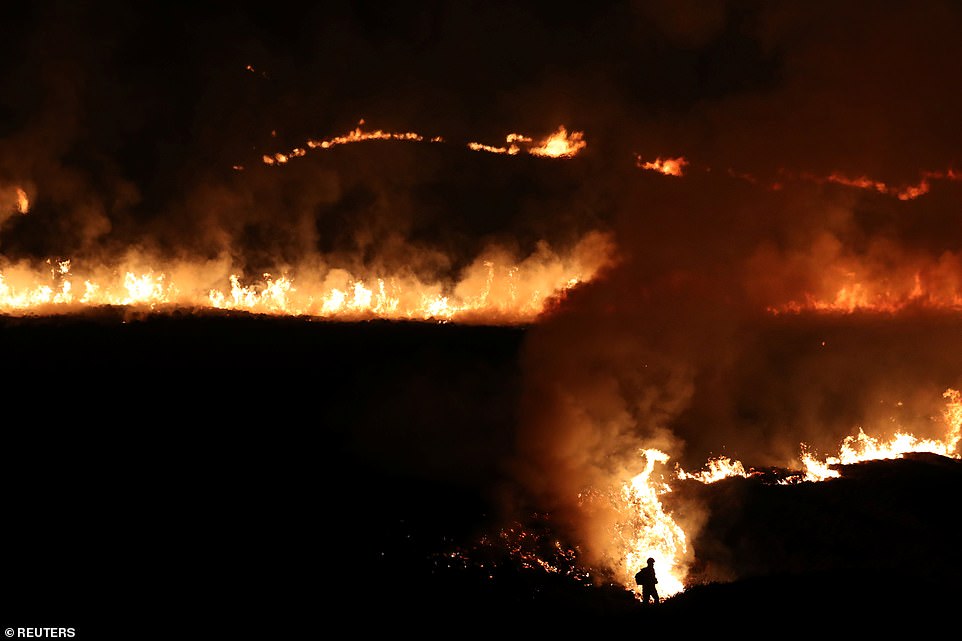 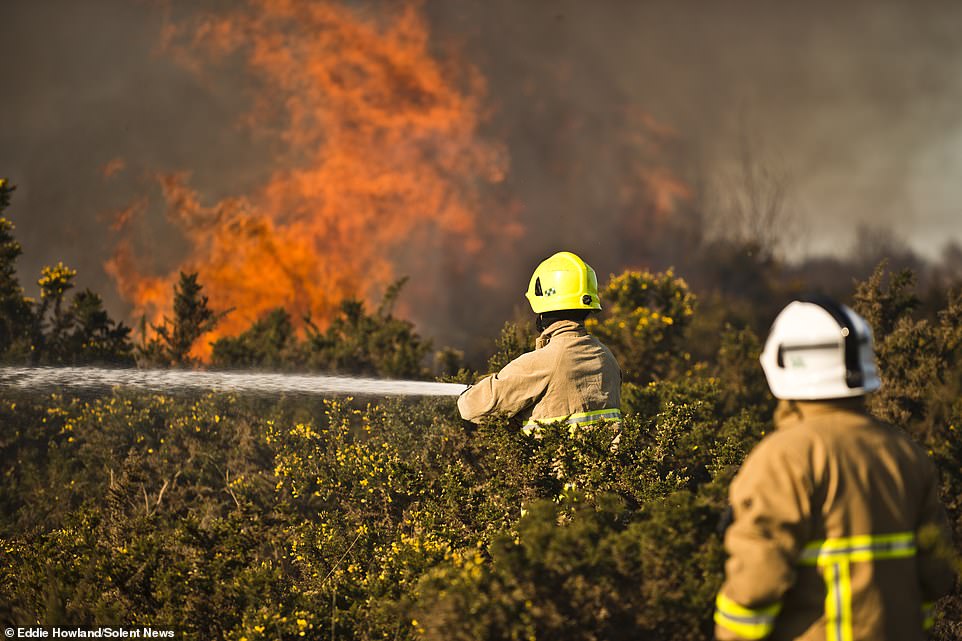 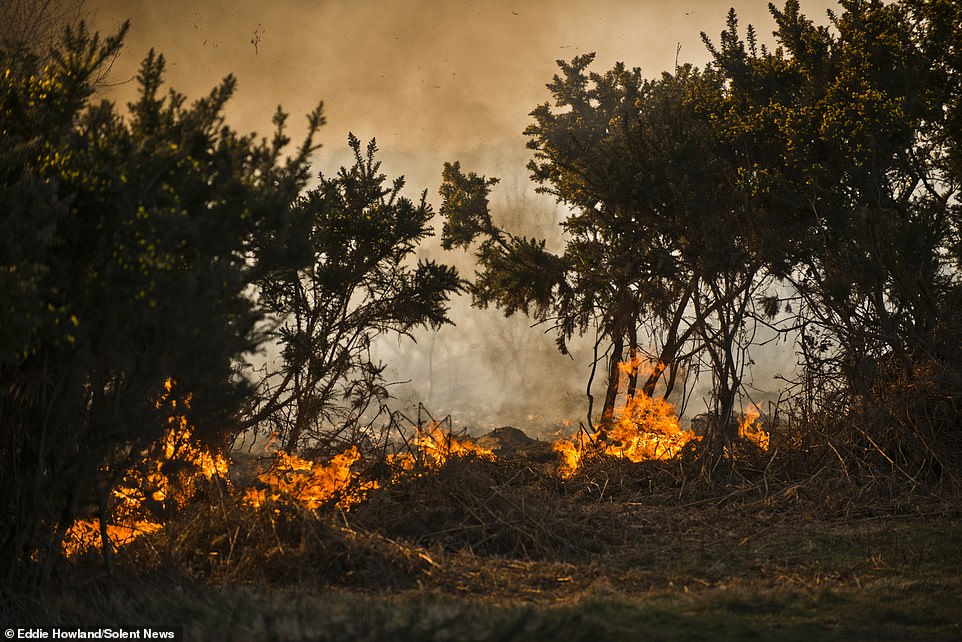 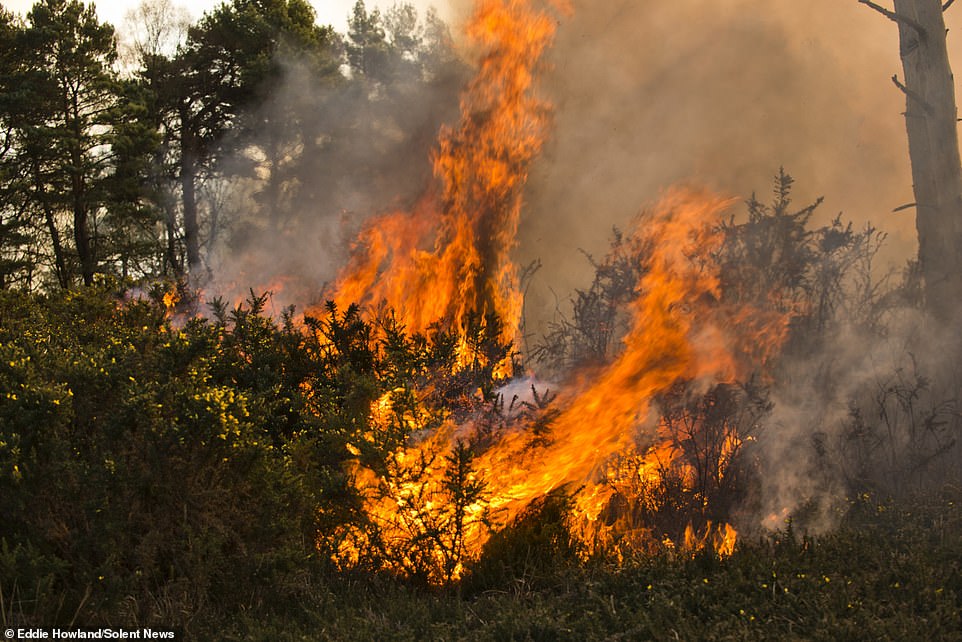 Mr Barter added that large numbers of insects such as bees, hoverflies and butterflies are also out gathering pollen.

Is climate change behind the February heatwave?

While the variability of weather makes it hard to link any single event to climate change, global warming is heating up the whole system and making extremes more likely, scientists say.

Those conditions, at the very end of winter, come against a backdrop of 1C of warming since pre-industrial times as a result of human activity, helping lead to record temperatures for the time of year.

‘Climate change has made what would have already been an extremely warm event even warmer and is probably responsible for tipping it over the 20C threshold,’ he said.

Dr Jo House, from the University of Bristol, said: ‘Weather is always variable so it is hard to link a single event to climate change. What we do know is that climate change is warming the whole system and makes events like these more likely to happen.’

Bob Ward, policy and communications director at the Grantham Research Institute on Climate Change and the Environment at the London School of Economics and Political Science, said: ‘Today’s record for the UK’s winter temperature is consistent with the clear climate change signal that we are seeing in the UK.’

He said: ‘Insects are flying around our gardens in abundance but they are almost certainly going to be impacted by any adverse weather.

‘Bees are going to be building their nests early but may find there is not enough pollen to sustain the worker bees.’

The British Beekeepers’ Association warned a ‘short, cold spell in March could prove a setback’ for bees but was otherwise upbeat about the warm weather.

Met Office forecaster Grahame Madge said there is ‘a very good chance’ of Britain being in the top five Februaries for average daily maximum temperature since records began in 1910.

Mr Madge said: ‘We’re still waiting to register the final days of the month but it’s going to stay well above average over the next day or two.’

Forecasters say cooler weather is due to happen gradually from today, sending temperatures plunging towards the average of 8C (46F) by the weekend.

‘We have low pressure coming in, bringing wet and windy weather. Over the coming days, we are likely to have Atlantic-dominated, unsettled conditions,’ Mr Madge added.

Mr Madge said despite there being almost no significant rain in England since February 9, early rain and snow means this month is nowhere near one of the driest. 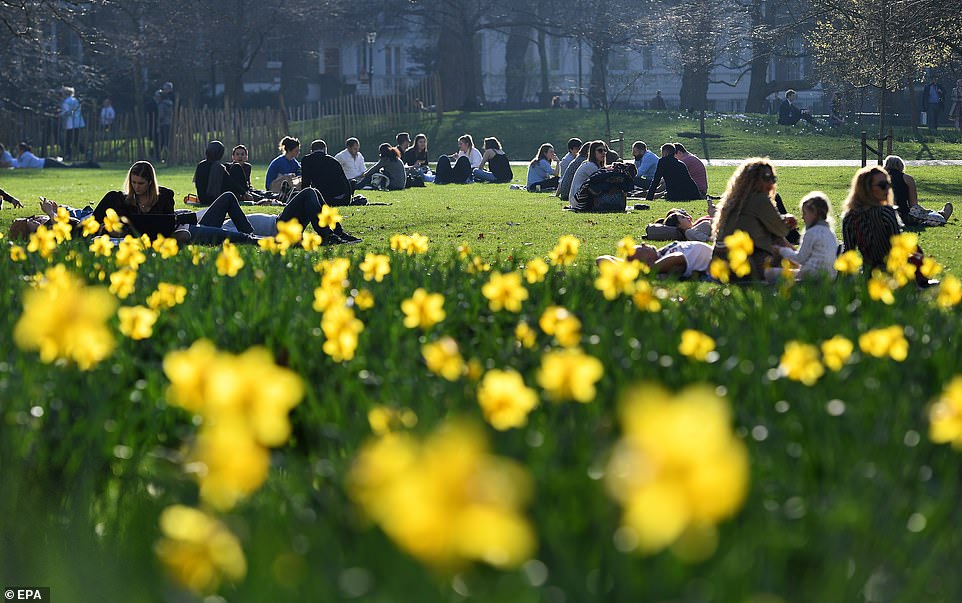 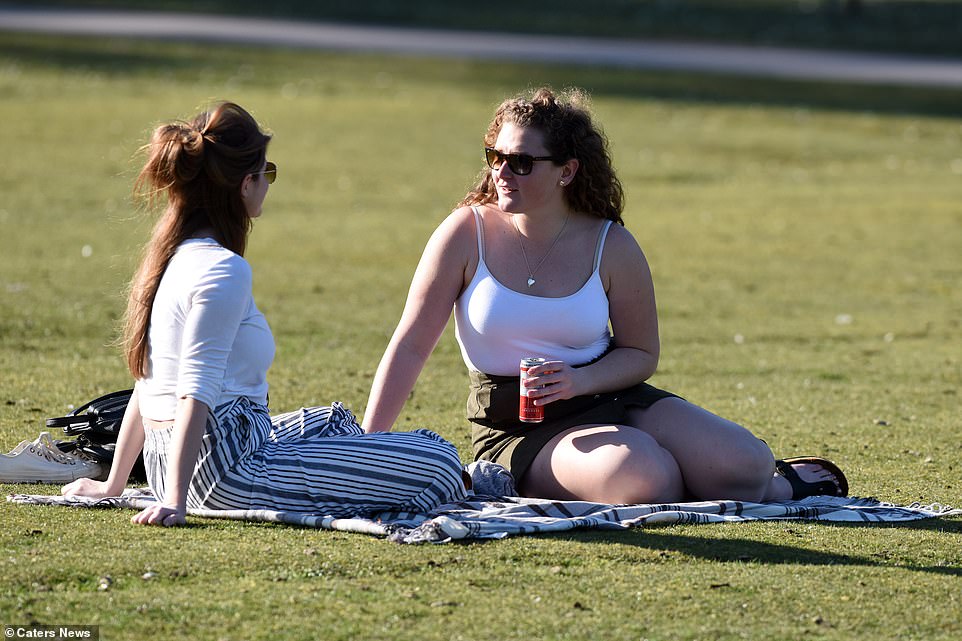 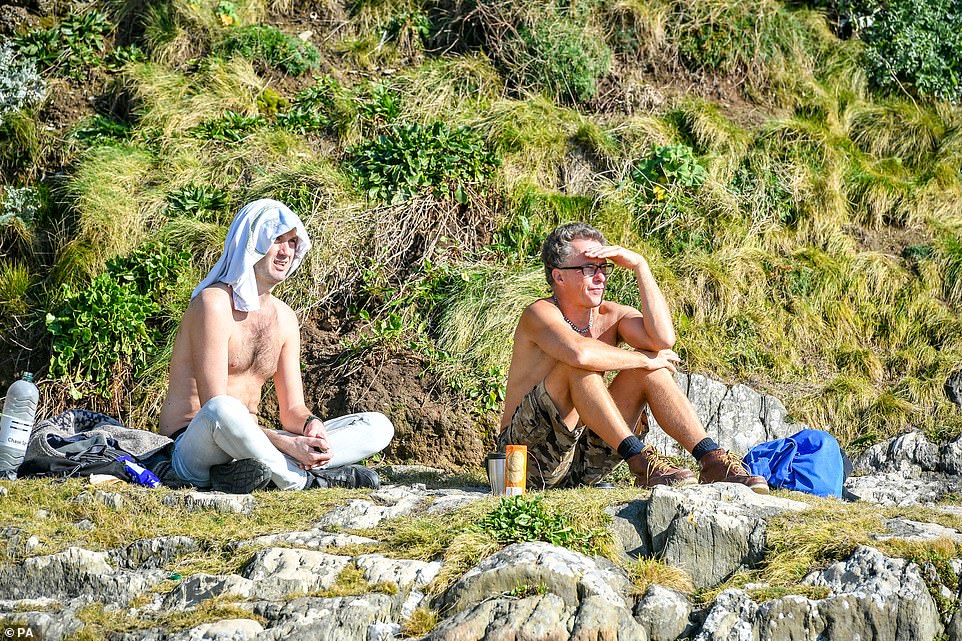 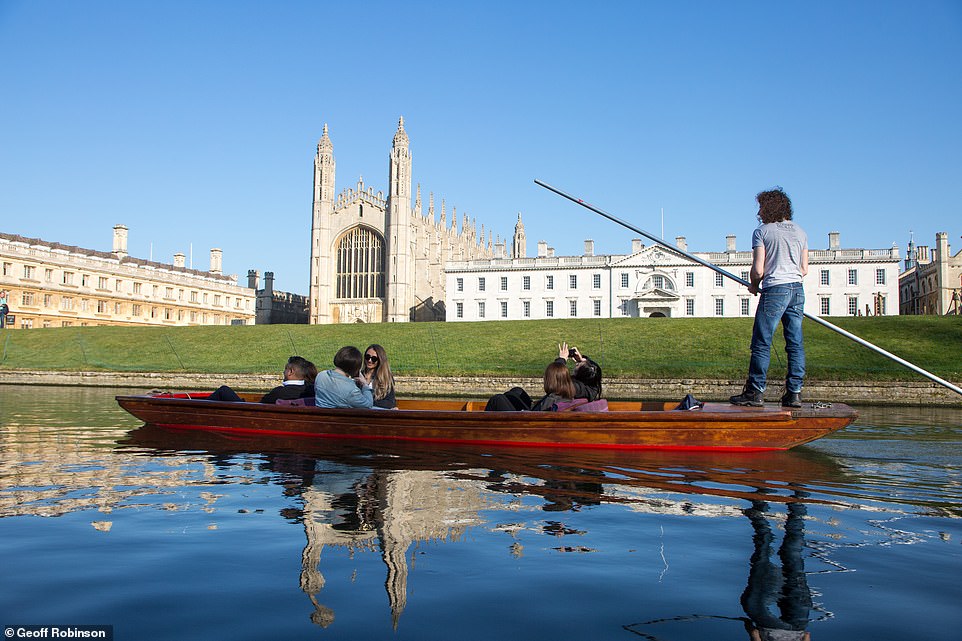 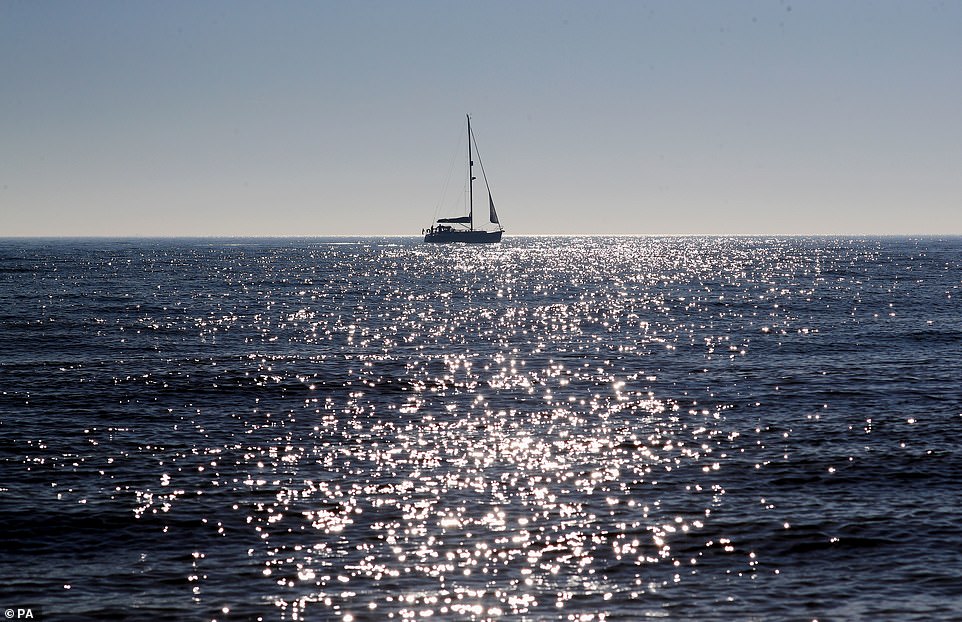 Today is again set to be very mild, dry and sunny, after early fog – which is set to be a problem particularly in southern England.

Unsettled weather is due to arrive tomorrow with a risk of thundery showers and rain, while Friday is set to be dry and bright but much cooler than of late.

‘Wet and windy’ weather is due to arrive on Saturday and Sunday, the Met Office states, with the heaviest rain in the west and gales possible in Northern Ireland and Scotland.

Last February, when Britain was hit by the Beast from the East, the warmest temperature recorded was 14.2C (57.6F) in Cardiff Bute Park, South Glamorgan.