FDNY and Air Force master sergeant Christopher Raguso, 39, was laid to rest on Saturday in New York following a helicopter crash in Iraq on March 15

A funeral was held on Long Island for an Air Force master sergeant and New York City firefighter who was killed in a helicopter crash in Iraq.

Christopher Raguso, 39, who had faced bloodshed in Iraq and Afghanistan, and hurricanes in Texas and the Caribbean, always came home to Long Island, alive – except this last time.

On Saturday morning, his flag-draped casket arrived atop a fire engine at St. Joseph’s Roman Catholic Church in the Suffolk County hamlet of Kings Park, with bagpipes intoning ‘Amazing Grace’ and hundreds of white-gloved, uniformed firefighters lining the street.

Some became pallbearers who carried him to the altar of the church where Raguso was married in 2009.

‘Chris made the supreme sacrifice,’ Nigro continued inside the packed Long Island church.

‘This hero was gone in an instant, leaving a legacy of service we must all strive to live up to,’ Nigro added. 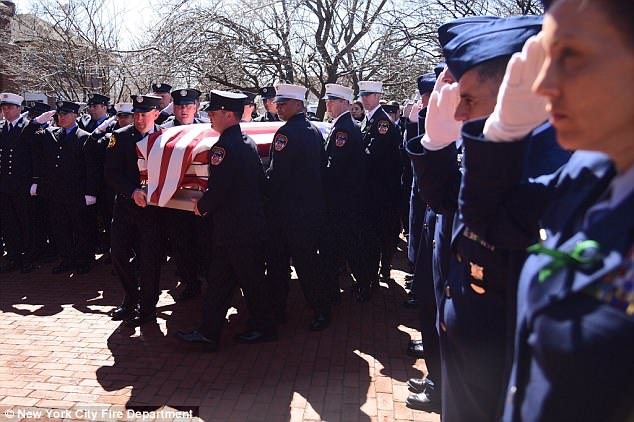 Christopher Raguso was laid to rest on Saturday on Long Island. He leaves behind a wife and two daughters Raguso, who was deployed in January, was one of seven servicemen killed in the helicopter crash on the Iraq-Syria border 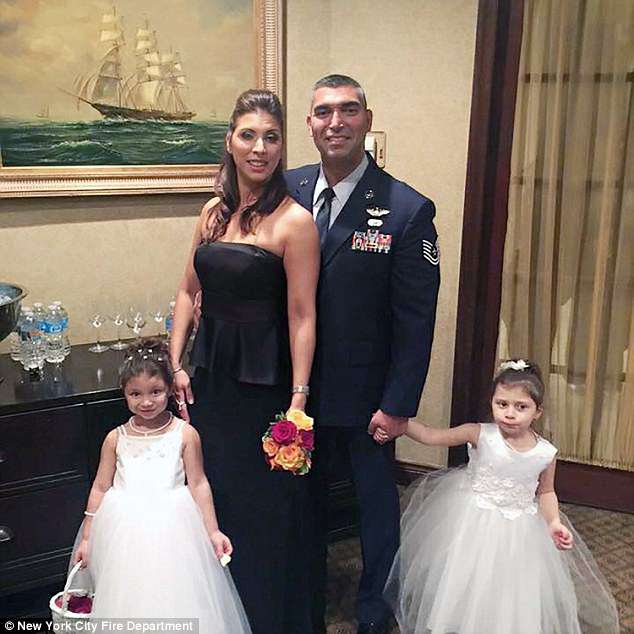 The FDNY veteran from Commack, L.I., is survived by his wife, Carmella, and their two daughters, ages 5 and 6 (pictured)

The 39-year-old lieutenant in the New York Fire Department was also a volunteer firefighter in nearby Commack, where he lived with his wife and two daughters.

‘This man’s entire life was dedicated to service of others, and he has done exactly what they and the country have asked him to; that’s because Chris didn’t know how not to give 100 percent of himself,’ said his father, John Raguso, in his eulogy.

‘He recognized that to be good at his job, he needed to go where the action was, he wanted to be there, whether that was home wrestling with his giggling daughters, or forcing entry into the heart of a six-story tenement on fire.’

Thousands of mourners were in attendance.

He was killed on March 15 in a military helicopter crash in Iraq that took the lives of seven National Guard members including that of another FDNY firefighter, Capt. Christopher ‘Tripp’ Zanetis.

Raguso was deployed in January.

The cause of the crash is still being investigated but officials have said that it does not appear to have been the result of enemy activity.

The crash is the deadliest incident involving U.S. soldiers abroad since May, 2013, when seven servicemen were killed by a roadside bomb in southern Afghanistan.

Air Force Reserve Major and FDNY Marshal Christopher ‘Tripp’ Zanetis, 37, was also among the seven servicemen who died when their helicopter crashed near the Iraq-Syria border, reportedly after hitting a power line. 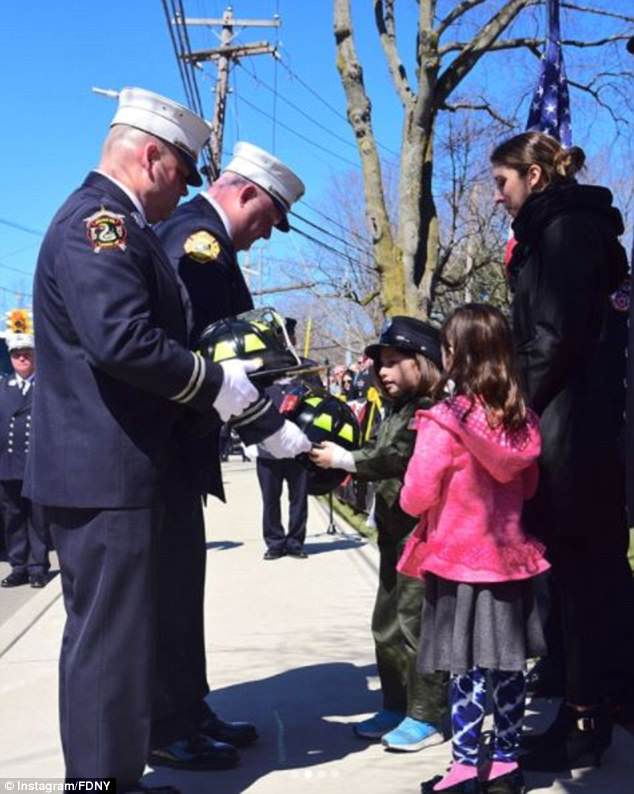 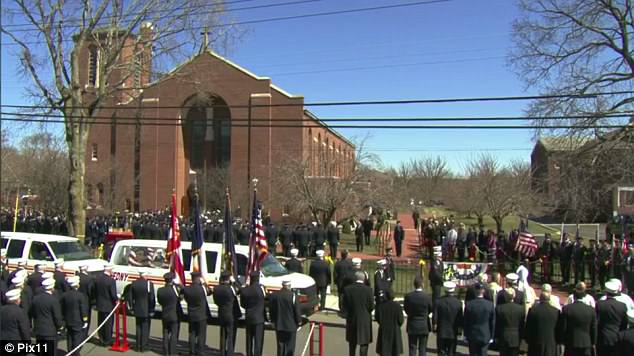 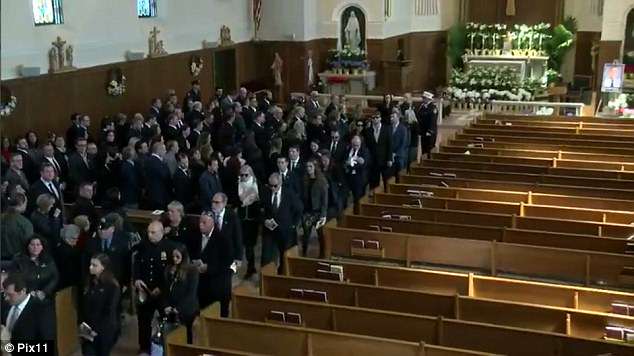 On Thursday, those who knew him gathered at the iconic downtown Manhattan park for a memorial service in the fallen soldier’s memory.

Hundreds of uniformed firefighters and members of the armed forces accompanied Zanetis’ family as the firefighter was given military honors.

The memorial, hosted by the FDNY and New York University, began with a procession from Zanetis’ former firehouse in the East Village to the park in Greenwich Village.