‘Firenado’ spotted in explosive Californian wildfire that has already destroyed more than 9,000 acres

A wildfire which has destroyed more than 9,000 acres in California has created a ‘firenado’.

‘Firenados’, or Fire tornadoes, happen when a gust of hot air rises up through the fire, swirling it up into the air.

California Department of Forestry and Fire Protection said yesterday that the fire, burning in Lassen County west of Susanville, has already scorched 9,420 acres and remains active five miles from Susanville.

‘The Hog Fire remained active throughout the night and still remains five miles from Susanville,’ the agency told Fox News.

A fire whirl shoots into the sky as flames from the Hog fire jump highway 36 about 5 miles from Susanville, California on Monday 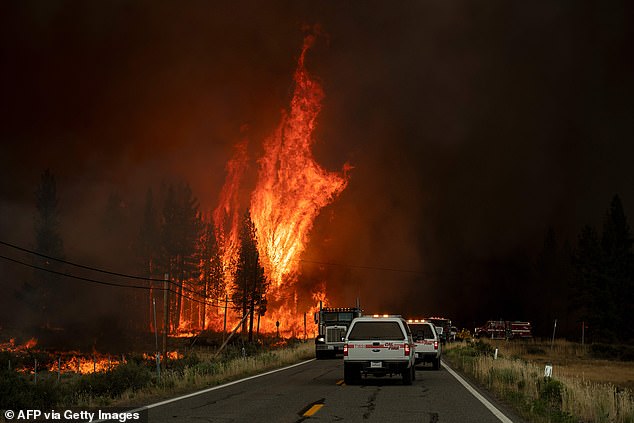 Flames rip through trees as the Hog fire jumps highway 36 about 5 miles from Susanville, California on Monday 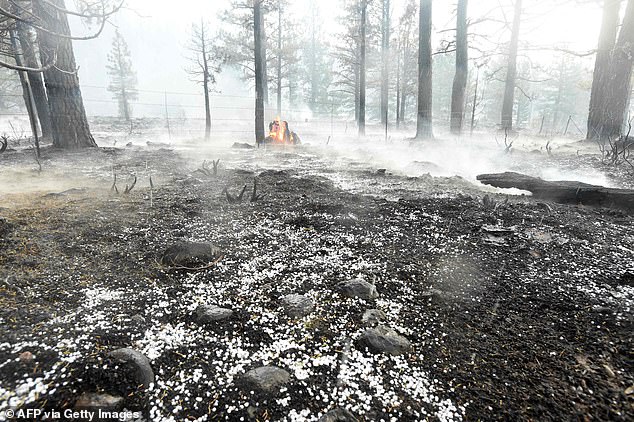 A tree stump keeps burning as hail covers the ground as it fell directly on the Hog fire near Susanville, California on Tuesday

Despite their best efforts Cal Fire said the Hog Fire is only nine per cent contained.

The blaze, which began Saturday afternoon, had spread 6,000 miles by Monday, and was said to have generated its own weather system, including thunder, lightning and rain.

Photographer Josh Edelson captured what is known as a ‘firenado’ rising up from the ground and forking its way into the sky, as the blaze tore through Highway 36 on Monday.

Last year, a tornado of flames emerged from a fire and swirled several meters into the air on a farm in Brazil. 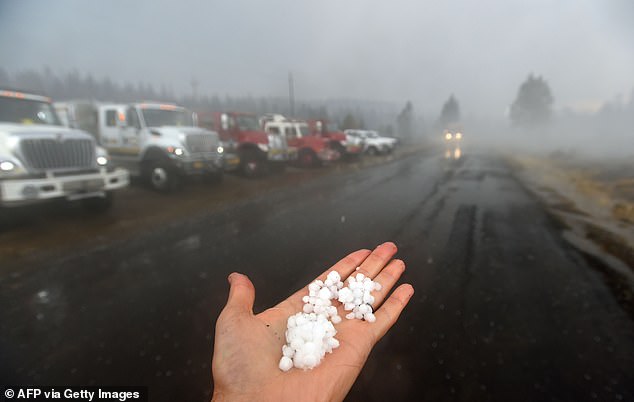 A collection of hail pellets are displayed as firefighters wait in their vehicles during a hail storm that falls on the Hog fire near Susanville, California yesterday 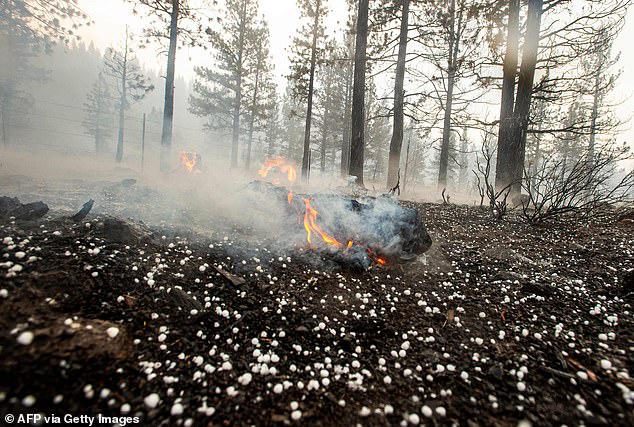 A log keeps burning as hail falls directly on the Hog fire near Susanville, California on Monday 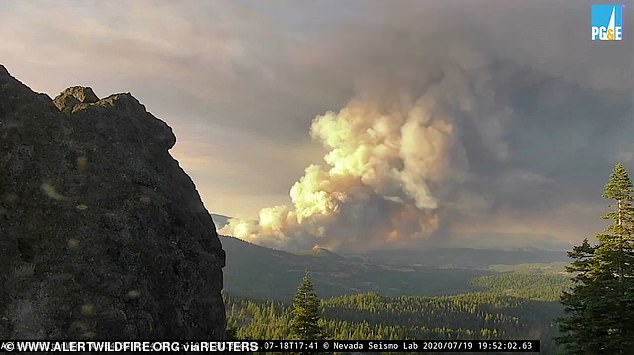 In the US, two years ago, the Californian Carr fire produced a ‘firenado’ with a wind speed of 143mph, according to the National Weather Service (NWS).

A fire cloud can form if there is enough moisture in the atmosphere, usually when moisture is released from the burning foliage.

Photographer Edelson said he saw the fire explode before the thunderstorms started.

‘The #HogFire was extremely erratic for a brief moment when a pyrocumulonimbus [sic] (fire cloud) ash plume enabled it to create its own weather – including lightning, thunder, and rain! It rained hard and the fire raged on creating multiple Fire whirls as it jumped across highway 36 near #Susanville, CA. 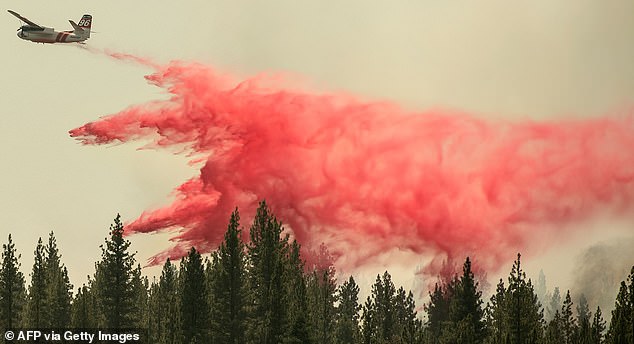 A CalFire aircraft drops fire retardant over the Hog fire, about 5 miles from Susanville, California, on Tuesday

‘Not my best work. I got a little scared so I stayed back a bit,’ Edelson wrote on social media.

Cal Fire told Fox News the fire had also caused communication problems after it tore through a fiber optic cable. More than 1,340 people have responded to the fire, some of whom are working on restoring communications in Susanville.

Some of those responding are firefighters using ‘air tankers’ to put out the blaze.