First cancer patient in the UK is treated with ‘groundbreaking’ radiotherapy

A father-of-two has become the first person in the UK to have cancer treatment with a revolutionary radiotherapy machine.

Prostate cancer patient Barry Dolling, 65, ‘jumped at the chance’ to be the first person to use the technology at the Royal Marsden Hospital in London.

The MR Linac machine is the first to do real-time MRI scans while it targets X-ray radiation beams at tumours, making it more accurate and reducing side effects.

Being able to more specifically target tumours and not healthy tissue around them means the machine can use stronger X-rays.

The machine could one day be able to destroy prostate cancer with a single blast, experts say, making it a doctor’s ‘dream come true’. 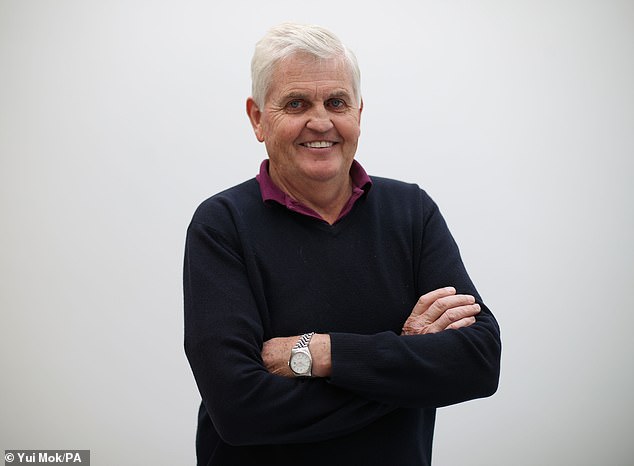 Mr Dolling, 65, was diagnosed with early prostate cancer in April, and ‘jumped at the chance’ to try out the new radiotherapy machine

The Royal Marsden Hospital and Institute of Cancer Research (ICR) in London is only the third place in the world to use the technology, which can track the shifting position of tumours in real time.

Mr Dolling, from Selsdon in Surrey, was diagnosed with prostate cancer in April and will receive four weeks of radiotherapy as part of a small clinical trial.

He said the limited side effects of the treatment allow him to continue working, playing golf and cycling.

He said he feels ‘very privileged’ to be the first UK patient to use the machine, adding: ‘It’s a very nice thought to think my treatment and the research they are doing with me will go on to help other people in the future.’

Radiotherapy is a cancer treatment in which radiation is used to destroy tumour cells.

It is most commonly delivered as beams of radiation which are targeted at a tumour and are so powerful that the energy destroys the flesh it is aimed at.

Because radiation does not distinguish between cancerous and healthy tissue, it can destroy healthy flesh as well.

This can cause side effects such as pain, sickness, tiredness, hair loss and loss of appetite.

Radiotherapy usually takes multiple sessions over a number of weeks, and it can be used to try and cure a tumour or just to relieve symptoms.

The MR Linac machine allows medics to constantly monitor the location of a tumour while delivering treatment.

This is revolutionary because many cancer tumours shift position during radiotherapy or between scanning and treatment.

Breathing, bladder filling or bowel changes can all affect the location of cancer, raising the risk of radiotherapy being off-target.

is a dream come true, because for the first time we can actually see what we are treating.

‘You can react to everything that’s happening.’

Medics using the machine take an MRI scan of the patient before designing a plan for radiotherapy for that day, reacting to any changes in the body.

This can also be adjusted in real-time as treatment is delivered.

The UK trial will begin with prostate cancer, but it’s hoped the machine will improve radiotherapy for a wide range of cancers, including hard-to-treat lung and pancreatic cancers. 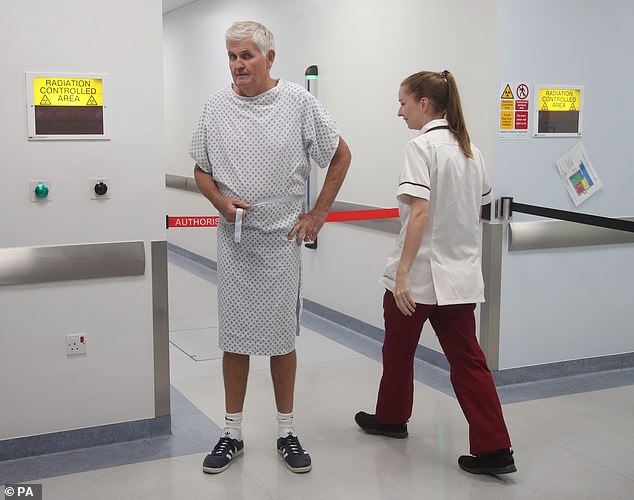 Mr Dolling, who will take part in four weeks of treatment for a clinical trial, says the reduction in side effects means he can keep working, cycling and playing golf 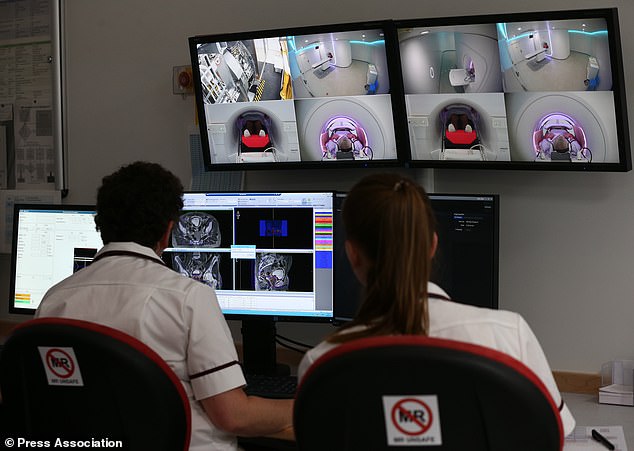 The MR Linac machine allows medics to constantly monitor the location of the tumour while delivering treatment, making the radiotherapy more accurate and less likely to damage surround healthy tissue

Dr Alison Tree, consultant clinical oncologist at the Royal Marsden and lead investigator of the trial, said: ‘Prostate cancer responds most effectively to large doses of radiation delivered over a short period of time.

‘However, because the prostate lies close to the rectum, high doses risk damaging the recum and increasing side-effects.

‘With the MR Linac we can better target the prostate while avoiding the rectum, so we can safely deliver higher doses of radiation.

‘It is possible that this groundbreaking precision will one day make it possible to cure prostate cancer in a single treatment.’

She added: ‘That is science fiction at the moment unfortunately, but that’s our dream really, that we can use the precision of this technology to test shorter ways of delivering radiotherapy.’ 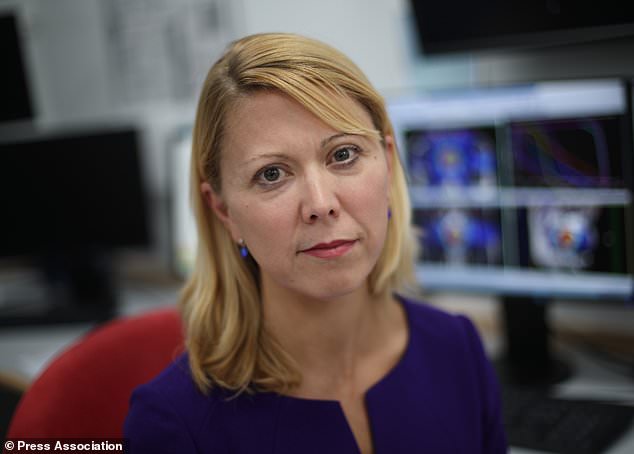 Alison Trees, a consultant clinical oncologist at The Royal Marsden, says the technology is ‘a dream come true’ and could one day cure prostate cancer with a single blast

The Royal Marsden is one of just seven centres in the world to have installed the MR Linac machine, enabled by a £10 million grant from the Medical Research Council.

More than 12,000 tonnes of earth was excavated to create a bunker to house the technology at their site in Sutton.

The space is large enough to fit 24 double decker buses.

An international consortium was formed in 2012 to oversee the project, led by a Dutch team and UK-based company Elekta, which makes the machine.

The University Medical Center Utrecht in the Netherlands became the first to use the machine in August.