First ever 3D printed human corneas are made by UK scientists

Scientists have made human corneas with a 3D printer for the first time ever at Newcastle University.

Researchers used human stem cells combined with collagen and alginate, which together turn into a strong gel, which could be used by a printer.

They say the technology could be used to produce an unlimited supply of corneas to combat a global shortage for people who need transplants.

The cornea is the transparent outer layer of the eye which helps focus the vision, but it can be damaged by infection, injury or health conditions.

Hundreds of donated corneas have to be imported into the UK every year for operations because so many British people are reluctant to donate their eyes to medicine after they die.

One of the scientists who developed the new technology said it needs more testing but it ‘has potential to combat the world-wide shortage’.

Dr Steve Swioklo and Professor Che Connon, from Newcastle University have produced the first 3D printed human corneas – they are pictured with a dyed cornea

It took just ten minutes to print the gel – called a bio-ink – in the shape of a cornea, and stem cells survived the process and continued to grow afterwards.

The human corneal stromal cells are mixed with collagen – the main component of human skin and blood vessels, and alginate – a natural carbohydrate found in seaweed and used to make gels.

This means the team have successfully created the first solution of its kind.

It is solid enough to hold its shape, soft enough to squeeze through the printer nozzle, and in which human stem cells can survive.

Ten million people worldwide are thought to need a corneal transplant to stop them going blind from disease, such as trachoma, an infection which roughens the inside of the eyelids.

In addition, millions of people are totally blind because of scarring on their cornea caused by burns, injuries or diseases.

‘This has the potential to combat the world-wide shortage’

Che Connon, Professor of Tissue Engineering at Newcastle University said: ‘Our 3D printed corneas will now have to undergo further testing and it will be several years before we could be in the position where we are using them for transplants.

‘However, what we have shown is that it is feasible to print corneas using coordinates taken from a patient eye and that this approach has potential to combat the world-wide shortage.’

The scientists are able to make a unique cornea to match the size and shape of an individual’s eye.

Currently, cornea transplants are taken from dead volunteer donors on the organ donor list so are not tailor-made for the patient. 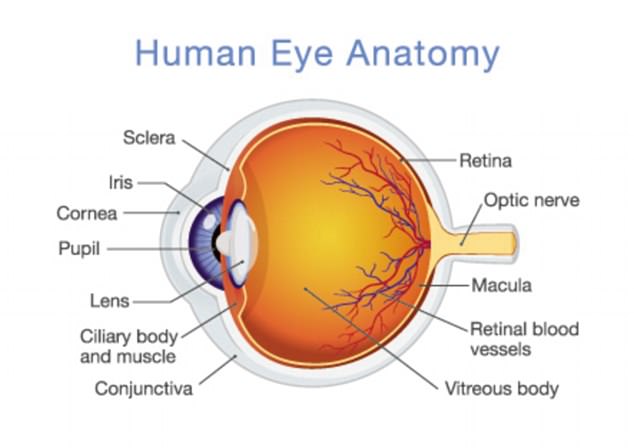 The cornea is the transparent outer layer of the eye, which is vital for focusing vision, and it can become damaged by injury or disease, which can lead to blindness

People can have a full or partial cornea transplant and more than 3,000 transplants are given each year in the UK.

UK imports hundreds of corneas a year to fill shortage

Corneas have to be imported from other countries to make sure there enough to give people vision-saving operations.

The shortage has grown in recent years: in 2012/13 the gap between donations and operations was just 346.

The UK’s cornea shortage is caused by people opting out of donating their eyes when they die, according to eye research charity Fight for Sight.

People don’t want to donate their eyes to medicine

Organ donors have the choice of restricting which parts of their body can be used, and nine out of ten people who are ‘restricted donors’ refuse to donate their eyes.

People are more reluctant to donate their eyes than any other part of their body, and this is thought to be because they feel a more personal connection to their eyes or they are scared of being disfigured, Fight for Sight says.

WHAT IS A CORNEA TRANSPLANT?

People may have their entire cornea transplanted or just part of it, depending on their condition.

A full-thickness transplant – called penetrating keratoplasty (PK) – is the most common kind.

During a PK transplant the damaged section of the cornea is removed by a surgeon and replaced with the donor cornea, which is taken from a healthy eye of a dead donor.

Corneas do not have types like blood, and anyone’s cornea can normally be transplanted onto any other person.

An instrument called a trephine, which works like a cookie cutter, is used to remove the section of cornea.

The new section is then held in place with tiny stitches, which may be faintly visible after the operation.

The procedure usually takes about 45 minutes and can be done under local or general anaesthetic. People will usually need to stay in hospital overnight.

There are other, less common types of transplant which only replace parts of the cornea and may use lasers or different surgical methods.

Being able to grow corneas in a lab could combat this shortage, and researchers around the world have been working towards a solution.

‘Teams across the world have been trying to do this’

Dr Connon said: ‘Many teams across the world have been chasing the ideal bio-ink to make this process feasible.

‘Our unique gel – a combination of alginate and collagen – keeps the stem cells alive whilst producing a material which is stiff enough to hold its shape but soft enough to be squeezed out the nozzle of a 3D printer.

‘This builds upon our previous work in which we kept cells alive for weeks at room temperature within a similar hydrogel.

‘Now we have a ready-to-use bio-ink containing stem cells allowing users to start printing tissues without having to worry about growing the cells separately.’

Medical conditions which may need someone to have their cornea operated on include keratoconus, in which the cornea weakens; degenerative conditions such as Fuchs’ endothelial dystrophy, which causes it to deteriorate.

The team, including PhD student Abigail Isaacson from the Institute of Genetic Medicine, used a simple low-cost 3D bio-printer to squeeze out the bio-ink in concentric circles to form the shape of a human cornea.

Their findings were published in the journal Experimental Eye Research.

Dr Neil Ebenezer, director of research, policy and innovation at Fight for Sight said: ‘We are delighted at the success of researchers at Newcastle University in developing 3D printing of corneas using human tissue.

‘This research highlights the significant progress that has been made in this area and this study is important in bringing us one step closer to reducing the need for donor corneas, which would positively impact some patients living with sight loss.

‘However, it is important to note that this is still years away from potentially being available to patients and it is still vitally important that people continue to donate corneal tissue for transplant as there is a shortage within the UK.

‘A corneal transplant can give someone back the gift of sight.’