The first ever clear photo of Neil Armstrong’s face on the moon has been revealed by an amateur British photographer.

The stunning image was created by property developer Andy Saunders, 45, from Culcheth in Cheshire and it shows the famous astronaut just moments after he had stepped onto the lunar surface for the first time.

Mr Saunders uncovered the photo after noticing that Armstrong had paused after arriving on the moon and that the pause was long enough for NASA to capture his face in high definition footage.

The photographer used photo-enhancing technology popular with astronomers to stack stills from the footage on top of each other, allowing him to reveal the surprisingly clear image of Armstrong.

The discovery of the photo comes as NASA and the US mark the 50th anniversary of the Apollo 11 mission.

Property developer Andy Saunders, 45, from Culcheth in Cheshire uncovered this stunning image of Neil Armstrong on the moon, the first ever clear shot of his face from the lunar surface

It is a landmark find as there are surprisingly few photos of Armstrong on the moon, with most capturing Buzz Aldrin.

Armstrong took most of the photos however some people also believe that Aldrin decided not to snap him in more because he was unhappy at being the second person on the surface.

Mr Saunders told the Telegraph: ‘I felt almost like an archaeologist brushing off the dust from some long-forgotten artefact.

‘It was fortunate that he leaned forward to see what he was doing, and I noticed he had his visor up, which meant, crucially, his face was visible for a few seconds.

‘I managed to get three separate good shots. I couldn’t believe it when the image emerged. You never see Armstrong’s face on the Moon, and there he was.’ 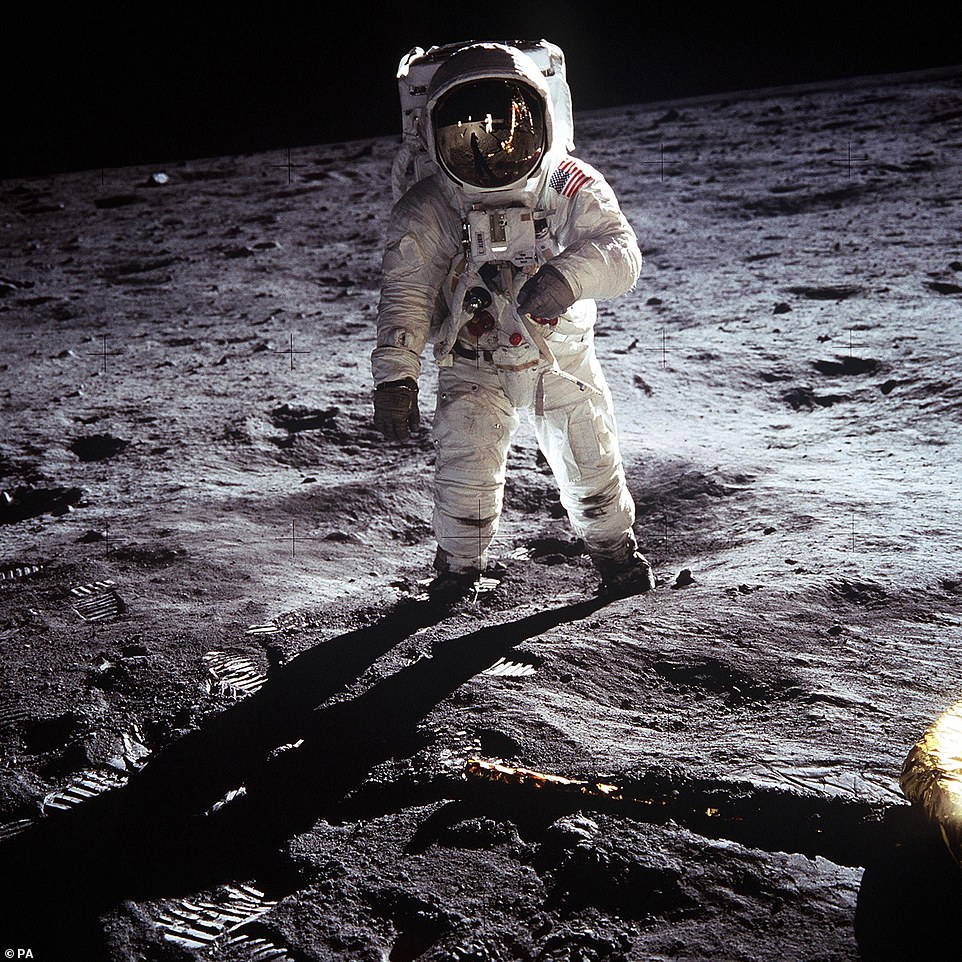 One of the most famous photos from the Apollo 11 moon landing, it shows Buzz Aldrin on the lunar surface 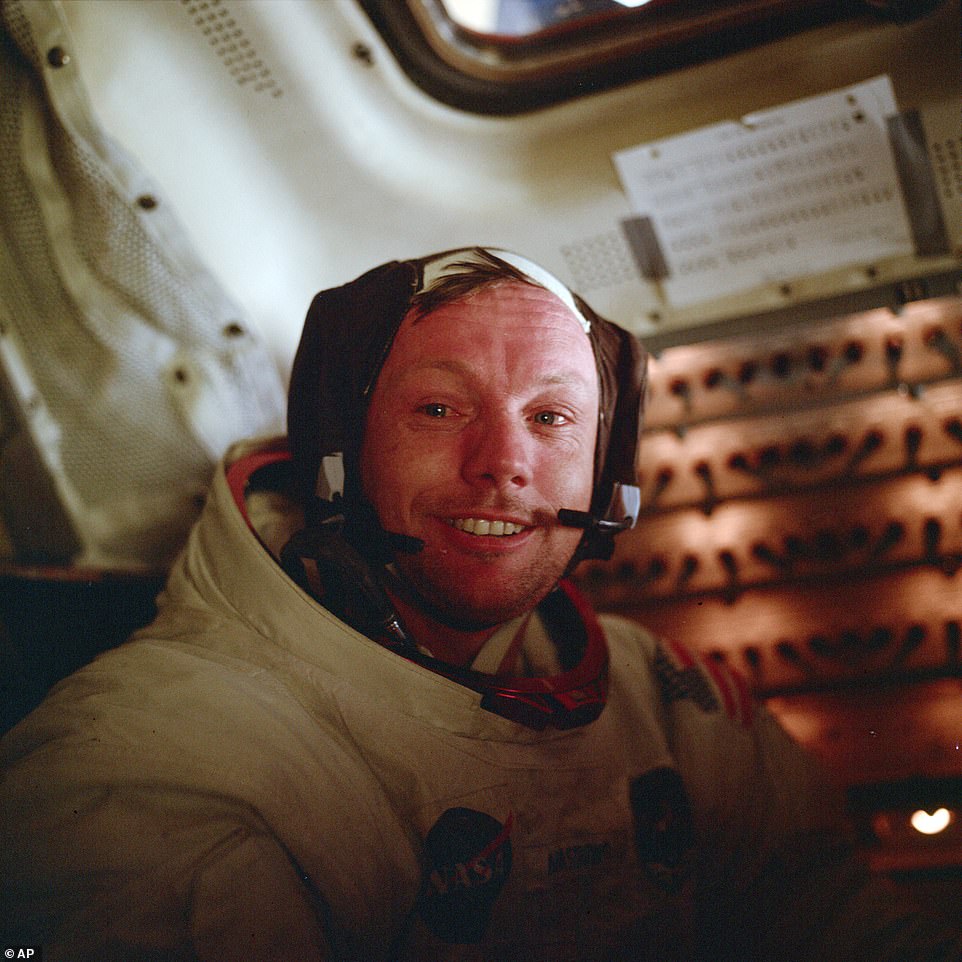 There are surprisingly few photos of Armstrong on the moon during the mission, as he acted as photographer for Aldrin 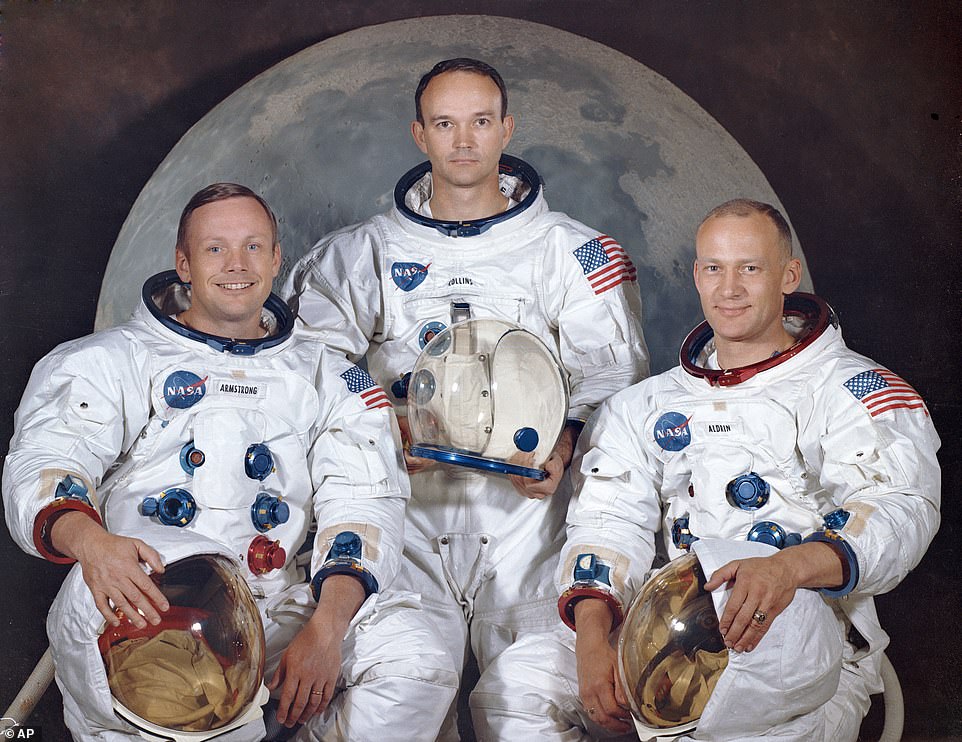 The crew of the Apollo 11, from left, Neil Armstrong, commander; Michael Collins, module pilot; Edwin E. ‘Buzz’ Aldrin, lunar module pilot. Apollo 11 was the first manned mission to the surface of the moon 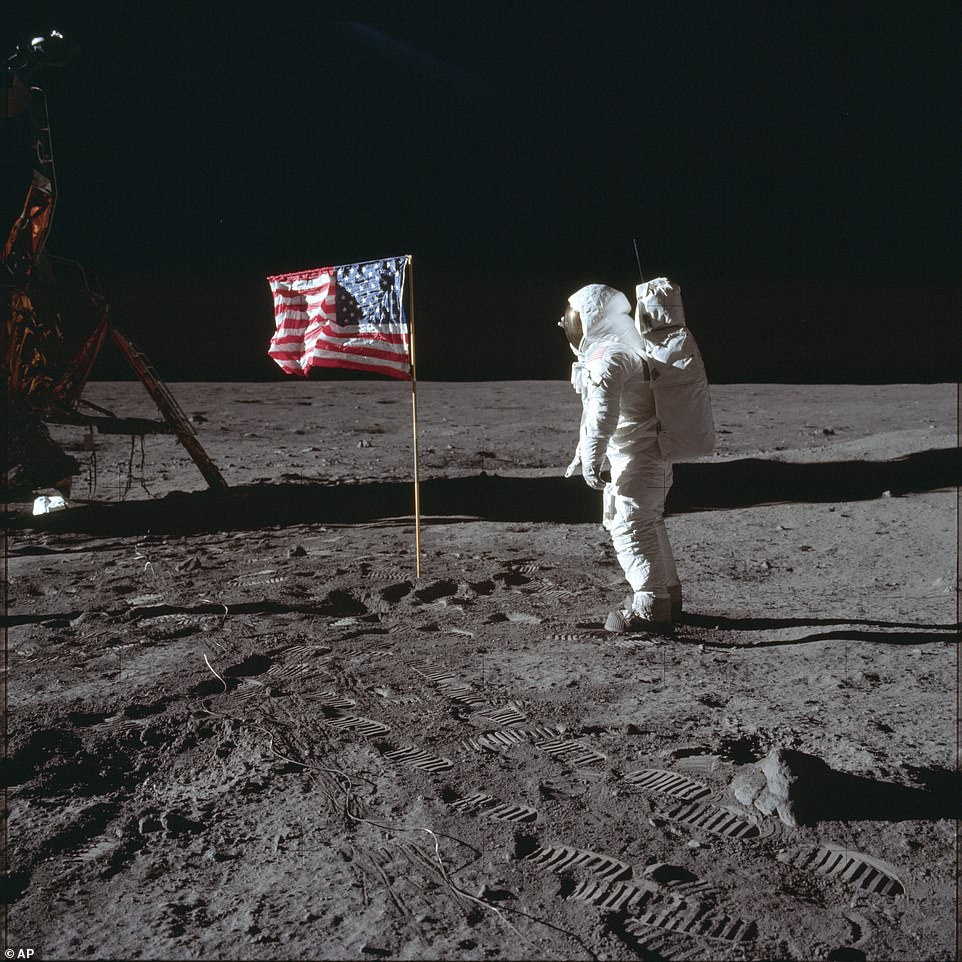 Most photos from the moon show Buzz Aldrin as Armstrong took the images, but there are some who believe the lack of photos of Armstrong is because Aldrin was unhappy at being the second onto the surface

The new photo was taken just minutes after Armstrong stepped out of the landing module, before Aldrin had even walked on the surface.

The photos come as the US marks the 50th anniversary of the moon landing.

President Donald Trump joined in some of the Apollo 11 anniversary fever by hosting the two living astronauts who helped carry out the historic 1969 mission. 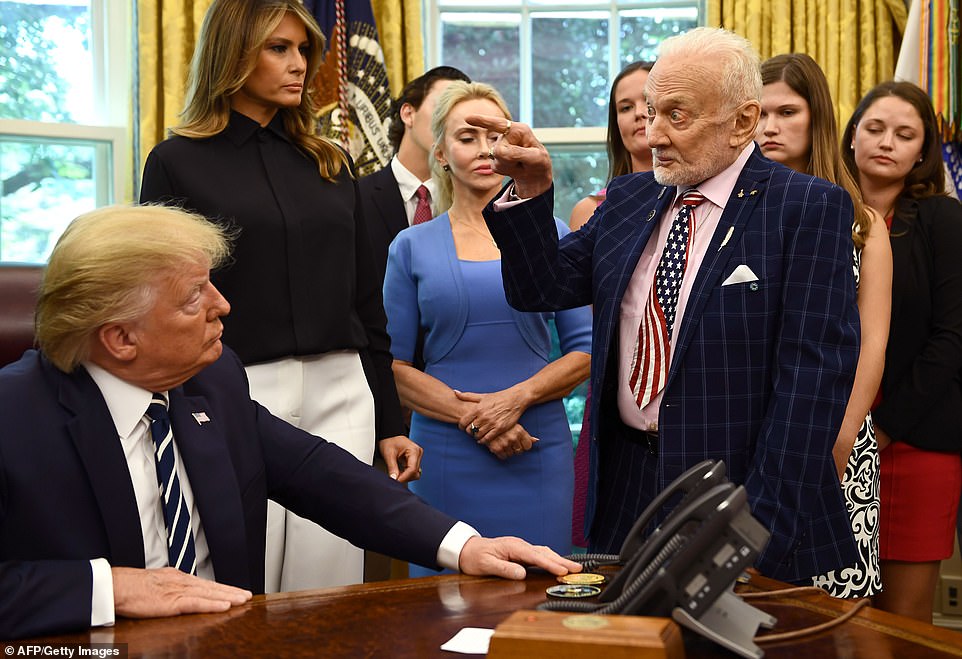 President Donald Trump speaks with Apollo 11 crew member Buzz Aldrin on Friday at the White House in Washington, DC, during a ceremony commemorating the 50th anniversary of the moon landing. Also attending were Michael Collins and children of Neil Armstrong 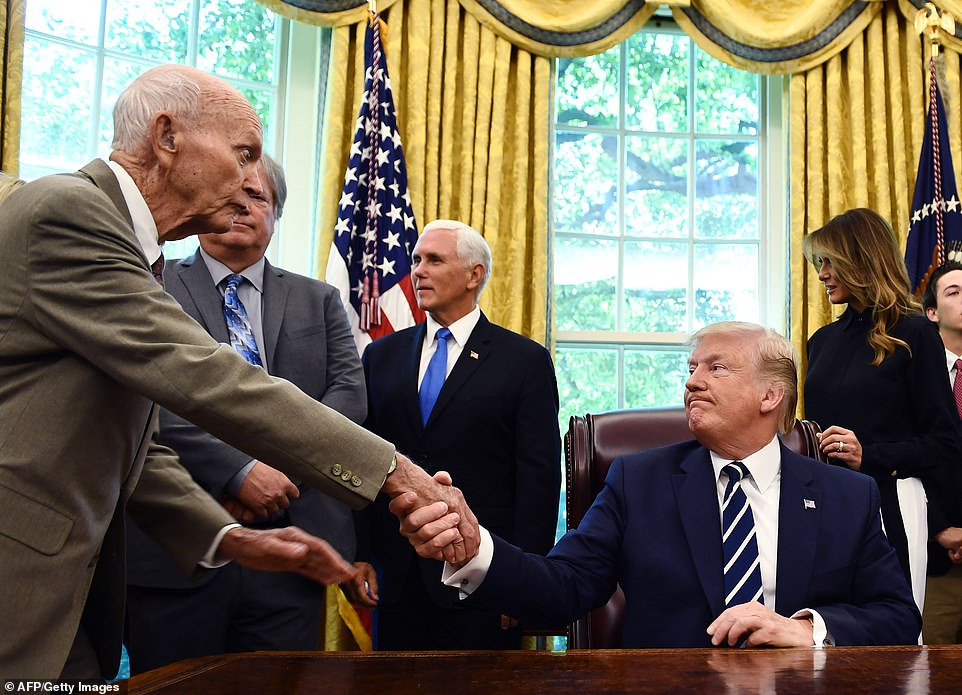 President Donald Trump shakes hands with Apollo 11 crew member Michael Collins on July 19, 2019, at the White House in Washington, DC, during a ceremony commemorating the 50th anniversary of the Moon landing. Collins served as command module pilot orbiting above the Moon on the historic mission 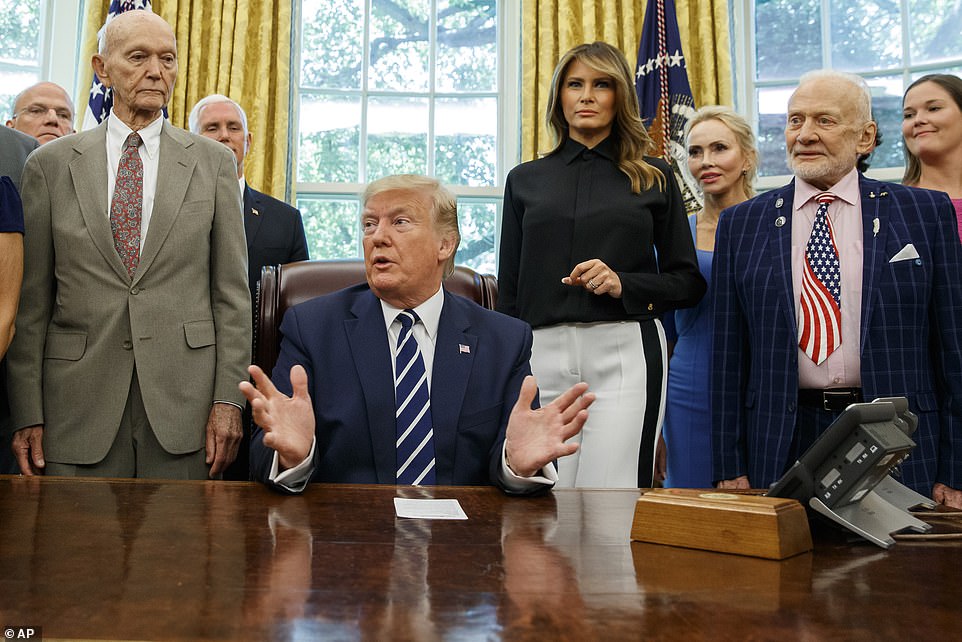 Trump, flanked by Aldrin and Collins, with First Lady Melania Trump behind him, also spoke on topics of the day, saying in an apparent reference to Democratic Rep. Ilhan Omar that he is unhappy that a congresswoman ‘can hate our country’

Buzz Aldrin, the Lunar Module pilot for Apollo 11, and Michael Collins, who served as command module pilot, both attended an Oval Office photo-op that the White House opened to the press at the last minute on Friday.

‘What a career you’ve had. Great careers,’ Trump said, during back-and-forth remarks where he quizzed the astronauts about the modern space program.

Armstrong, the former Korean War aviator and Navy test pilot who commanded the mission, died in 2012. He was represented by two sons, Eric Armstrong and Marc Armstrong.