AIDS has claimed more than 33million lives and its causative agent, the human immunodeficiency virus (HIV), has thus far proved impossible to find a vaccine for.

Drugs which prevent transmission of the virus and squash symptoms are now readily available in many countries, but 1.7 million people became infected with HIV in 2019.

Professor Jacques Pepin, an epidemiologist at Université de Sherbrooke in Canada, has been trying to discover the origin of HIV for decades, since his time as a GP in Zaire (today the Democratic Republic of Congo) in the 1980s.

Previous studies found the simian immunodeficiency virus (SIV) in chimps first crossed over into humans in South-East Cameroon at the start of the 20th century.

Simian immunodeficiency virus can be fatal to chimps and is exactly the same as HIV, the only difference between the two is the host it lives inside.

HIV is an example of zoonotic transmission, where a pathogen can cross from one species to another, like Covid-19, bird flu and cowpox.

In the acclaimed first edition of his book ‘Origin of AIDS’, published in 2011, Dr Pepin concluded HIV likely infected a hunter in Cameroon at the start of the 20th century, before spreading to Léopoldville, now known as Kinshasa in the Congo.

Now, a revised version of this ‘cut hunter’ hypothesis has been published which states the original ‘Patient Zero’ was not a native hunter, but instead a starving World War One soldier forced to hunt chimps for food when stuck in the remote forest around Moloundou, Cameroon in 1916 — giving rise to the ‘cut soldier’ theory.

In an exclusive interview with MailOnline, Professor Pepin reveals how colonialism, starvation and prostitution helped create the ongoing AIDS epidemic.

Professor Jacques Pepin believes a hungry World War One soldier forced to hunt chimps for food when stuck in the remote forest around Moloundou, Cameroon in 1916 – the ‘cut soldier’ theory. Eventually, the soldier, after the war, came back all the way to Léopoldville and probably started the very first train of transmission in Léopoldville itself. From here, the virus spread and eventually was exported to the US, where it later went global 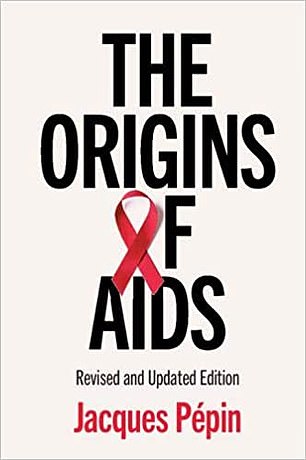 In an exclusive interview with MailOnline, Professor Pepin reveals how colonialism, starvation and prostitution helped create the ongoing AIDS pandemic.

‘During World War One, Germany had a number of colonies in Africa and the Allied forces decided to invade these colonies, one of which was Cameroon,’ said Professor Pepin.

‘Cameroon was invaded by a combination of British, Belgian and French soldiers from five directions.’

One of the invasion routes saw 1,600 soldiers venture from Léopoldville up the River Congo and its tributary the Sanger River before reaching the final destination in Cameroon on foot.

This path took them to the remote town on Moloundou, the location which previous studies had speculated was the site of the very first HIV infection.

‘The soldiers spent three or four months in Moloundou before moving forward. When they were there, the main problem was not bullets from the enemy, but starvation,’ Professor Pepin said.

The normal population of the entire South-East region of Cameroon in the 1920s was around 4,000, living off cassava, other crops and bushmeat.

These people fled when the soldiers arrived due to their brutal reputation for slaughtering towns and raping women.

As a result, the soldiers soon ran out of food and were reliant on supplies sent by river from Brazzaville and Léopoldville.

However, the river only went so far and ‘bearers’, poorly-paid locals, were employed to manually carry food, wine, ammunition and weapons to Moloundou.

You can get or transmit HIV only through specific activities, most commonly through sexual behaviors and needle or syringe use.

They’re often broken into six groups because they work in different ways.

Doctors recommend taking a combination or ‘cocktail’ of at least two of them.

Called antiretroviral therapy, or ART, it can’t cure HIV, but the medications can extend lifespans and reduce the risk of transmission.

NNRTIs bind to a specific protein so the virus can’t make copies of itself.

These drugs block a protein that infected cells need to put together new copies of the virus.

These drugs help block HIV from getting inside healthy cells in the first place.

This stops HIV before it gets inside a healthy cell, but in a different way than fusion inhibitors. It blocks a specific kind of ‘hook’ on the outside of certain cells so the virus can’t plug in.

These stop HIV from making copies of itself by blocking a key protein that allows the virus to put its DNA into the healthy cell’s DNA.

Daily treks of up to 25 miles carrying a 25kg (55lbs) payload and insufficient nutrition led to half of these souls perishing, Professor Pepin estimates.

The logistical issues led to mass starvation and forced soldiers to venture into the forest and hunt for any animal that could be eaten.

‘All of a sudden you have 1,600 soldiers with rifles and plenty of ammunition, so the level of hunting in that area went up dramatically over these few months,’ he told MailOnline.

‘My hypothesis is that one of the soldiers got infected while hunting in the forest. A chimpanzee was killed and when cutting the animal to bring it back, there was an injury which got infected with the virus.

‘Eventually, the soldier, after the war, came back all the way to Léopoldville and probably started the very first train of transmission in Léopoldville itself.’

Professor Pepin believes that once the virus had this foothold in the human population, it initially spread slowly, confined to what was the then capital of the Belgian colony.

He estimates that this one case of zoonotic transmission in 1916 led to around 500 infected people in the early 1950s.

Then, due to contaminated infections from healthcare services forced to reuse needles, the spread of the virus accelerated throughout the 50s.

In 1960, the Congo shed the shackles of colonialism, triggering an influx of refugees and migrants to the city.

The population of Léopoldville was about 14,000 at the start of the 20th century and now Kinshasa, the name given to Léopoldville in 1966, is home to 14 million people — a 1,000-fold increase in a century.

However, the newly named city proved the perfect breeding ground for HIV as it created a lopsided sex divide, with ten males living there for every female.

This led to poverty and rife prostitution, which helped the sexualually transmitted virus spread among the city’s population.

‘Every year prostitutes would have up to 1,500 clients. That was perfect for the sexual amplification of HIV between these high volume sex workers and their clients,’ says Professor Pepin.

‘That’s when really sexual transmission became accelerated in the 1960s.’

The hub of Léopoldville was integral in the spread of HIV globally, Professor Pepin adds, saying by the 1960s a handful of cases were seen in other parts of the former Belgian Congo.

A Haitian technical assistant that came to the country after the nation’s independence caught the virus in this region, and eventually took it home where it then spread among gay men.

‘Within a few years it was re-exported to the US and in the US it spread among gay men and IV drug users and from the US it went to Western Europe,’ Dr Pepin says.

Dr Jacques Pepin’s book ‘The Origins of AIDS’, published by Cambridge University Press, is available to buy now for £19.99 RRP.

WHY MODERN MEDS MEAN HIV IS NOT A DEATH SENTENCE

Then, ART (anti-retroviral therapy) was made, suppressing the virus, and meaning a person can live as long a life as anyone else, despite having HIV.

Drugs were also invented to lower an HIV-negative person’s risk of contracting the virus by 99%.

In recent years, research has shown that ART can suppress HIV to such an extent that it makes the virus untransmittable to sexual partners.

That has spurred a movement to downgrade the crime of infecting a person with HIV: it leaves the victim on life-long, costly medication, but it does not mean certain death.

Here is more about the new life-saving and preventative drugs: