By Associated Press and Adry Torres For Dailymail.com

Spanish authorities have captured the first narco submarine to ever cross the Atlantic Ocean.

Law enforcement estimate there could be three tons of cocaine worth $100 inside the 65-foot vessel that was intercepted Sunday in the northwestern region of Galicia.

The police dealt with tough weather conditions Tuesday as steady rain and strong winds made it difficult for the sunken submarine to be brought up to the dock at the Port of Aldán.

During the operation to bring the submarine to a ramp and extract its cargo, several cables that were attached to it snapped off, causing the vessel to sink by several dozen feet. 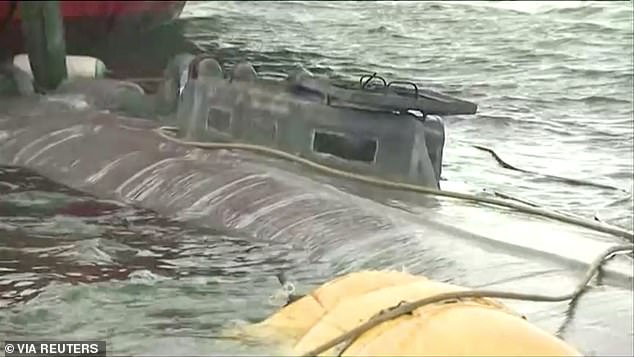 The submarine, believed to be the first to ever cross the Atlantic Ocean packed with drugs, sunk several dozen feet on Tuesday

A judge on Tuesday ordered two male Ecuadorean nationals held without bail as law enforcement intensified the search for a third suspect, a Spanish man.

The crew abandoned the submarine in the Aldán inlet off the province of Pontevedra.

It wasn’t clear if they sank it on purpose.

Work on bringing the vessel ashore began Monday in bad weather and had to be suspended until Tuesday.

Spanish authorities said it was the first time a submarine had been found to be used in drug trafficking in the country. Police divers pulled out one package of cocaine from the vessel Monday.

Media reports said the vessel could be carrying three metric tons, but the official said this couldn’t be confirmed yet. The official spoke on condition of anonymity in accordance with government rules.

Spanish police had been monitoring the vessel’s movements in recent days in coordination with international police, who reportedly learned of the submarine’s route after it stopped in Portugal.

The official couldn’t say from which country the submarine had come, but media reports said police suspected it to have set off from Colombia. 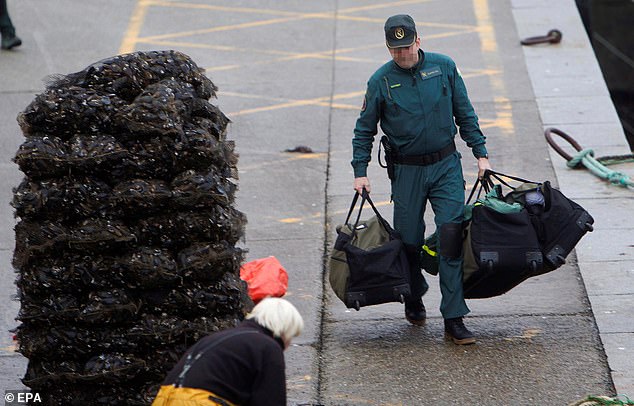