President Trump waved and gabbed with visitors as he walked downstairs alongside First Lady Melania, who flashed a smile while wearing black formal wear to coordinate with her husband.

Ivanka donned a pretty light-purple sweater and white and purple knee-length skirt for the occasion.

Tiffany looked her usual chic in a sparkly black number with a slit up the front, paired with pointed-toe pumps. Trump’s youngest daughter posed alone for a social media photo in front of a Christmas tree and with friends. 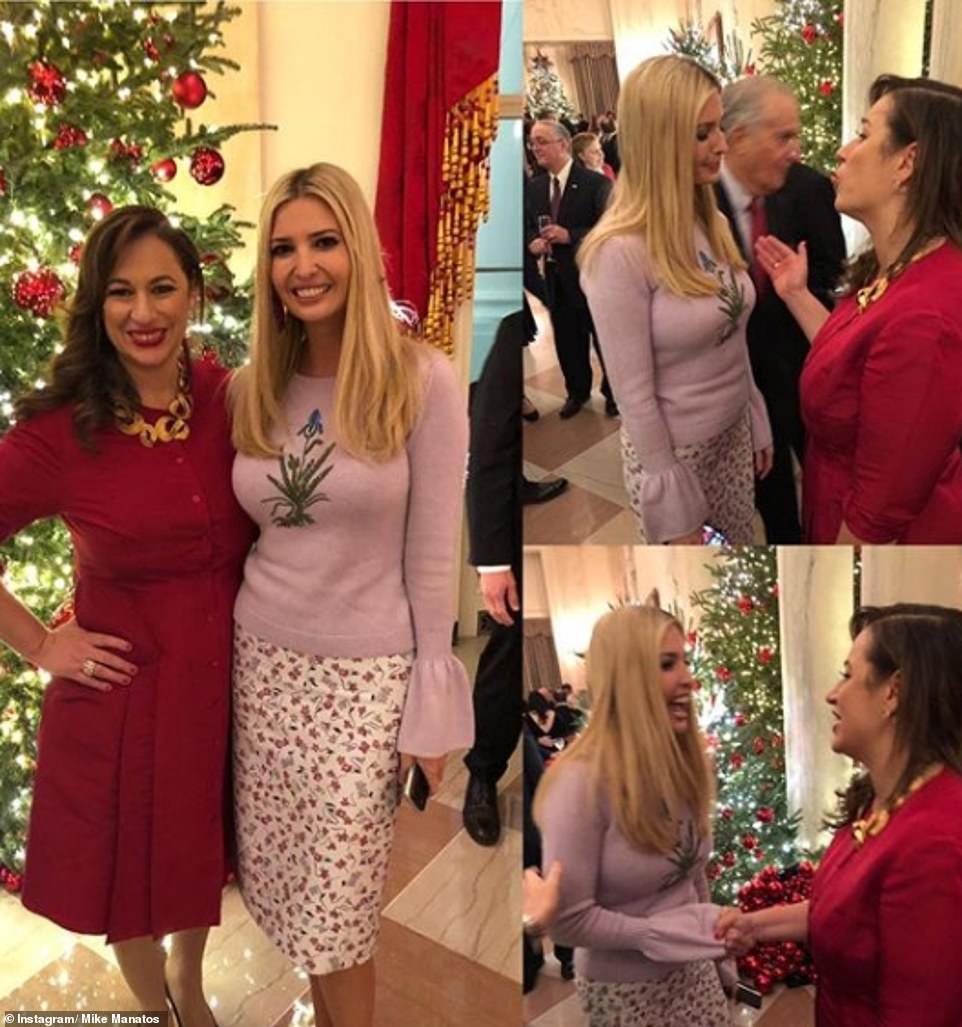 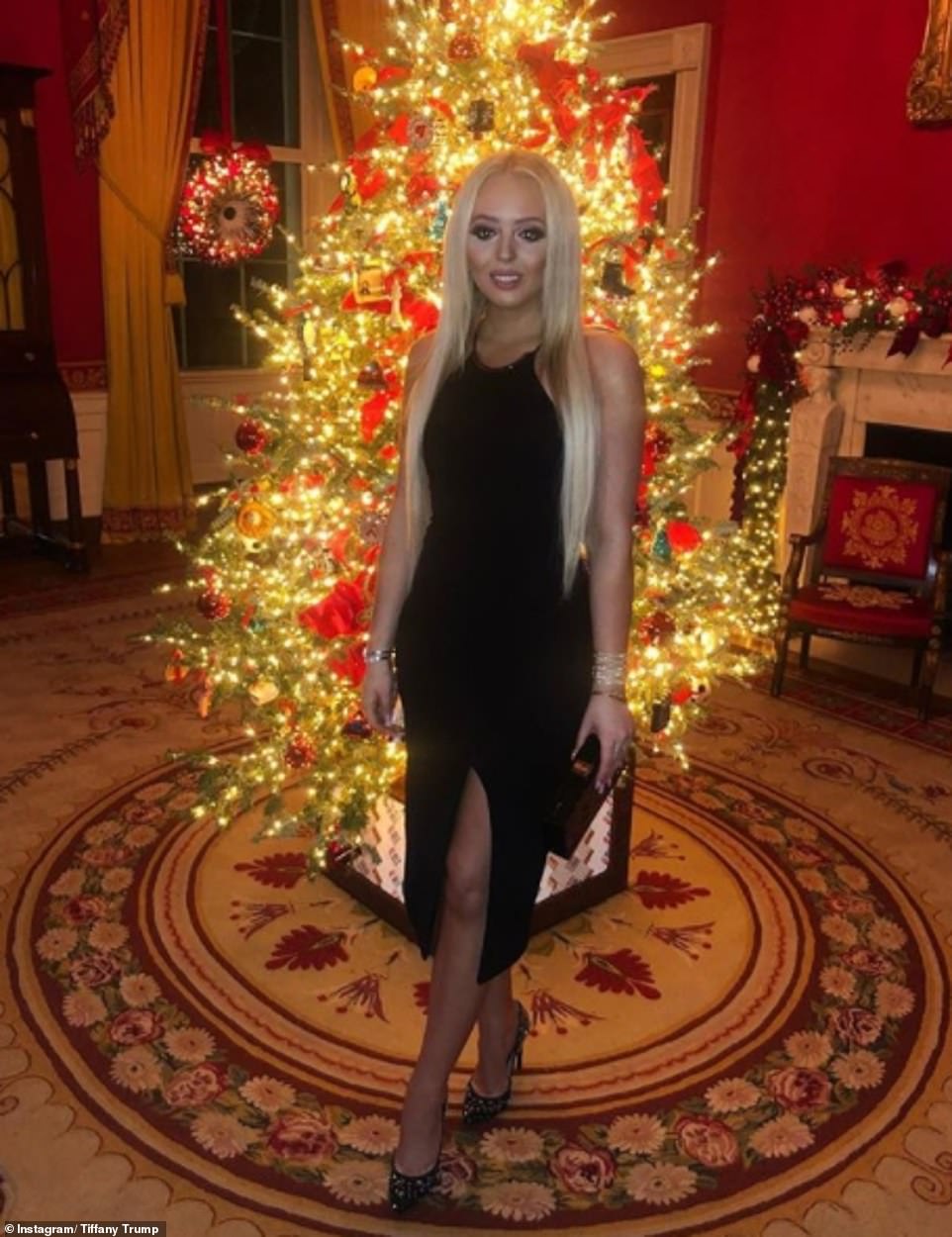 Tiffany looked her usual chic in a sparkly black number with a slit up the front, paired with pointed-toe pumps 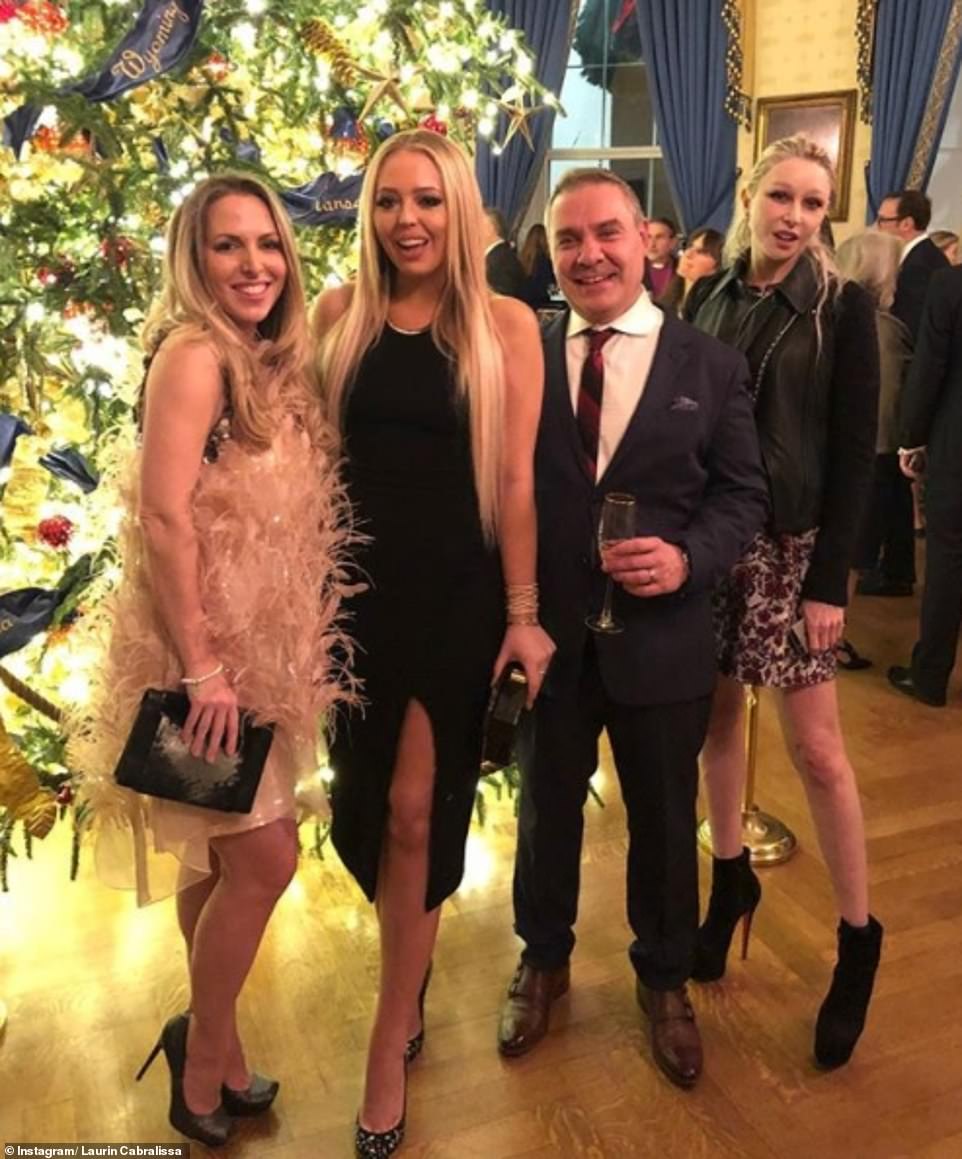 Tiffany posed for photos with guests. Laurin Cabralissa took to Instagram: ‘My first time at the White House and meeting @tiffanytrump tonight’

Lara and Eric Trump stood side-by-side for a sweet snap in front of a holiday shrub, wearing coordinating red attire. Donald Trump Jr. and the remaining family were not pictured in social media photos.

Last year’s gathering for the press turned out to be a flop as Trump refused to pose for photos and CNN boycotted the event ‘in light of the president’s continued attacks on freedom of the press’. 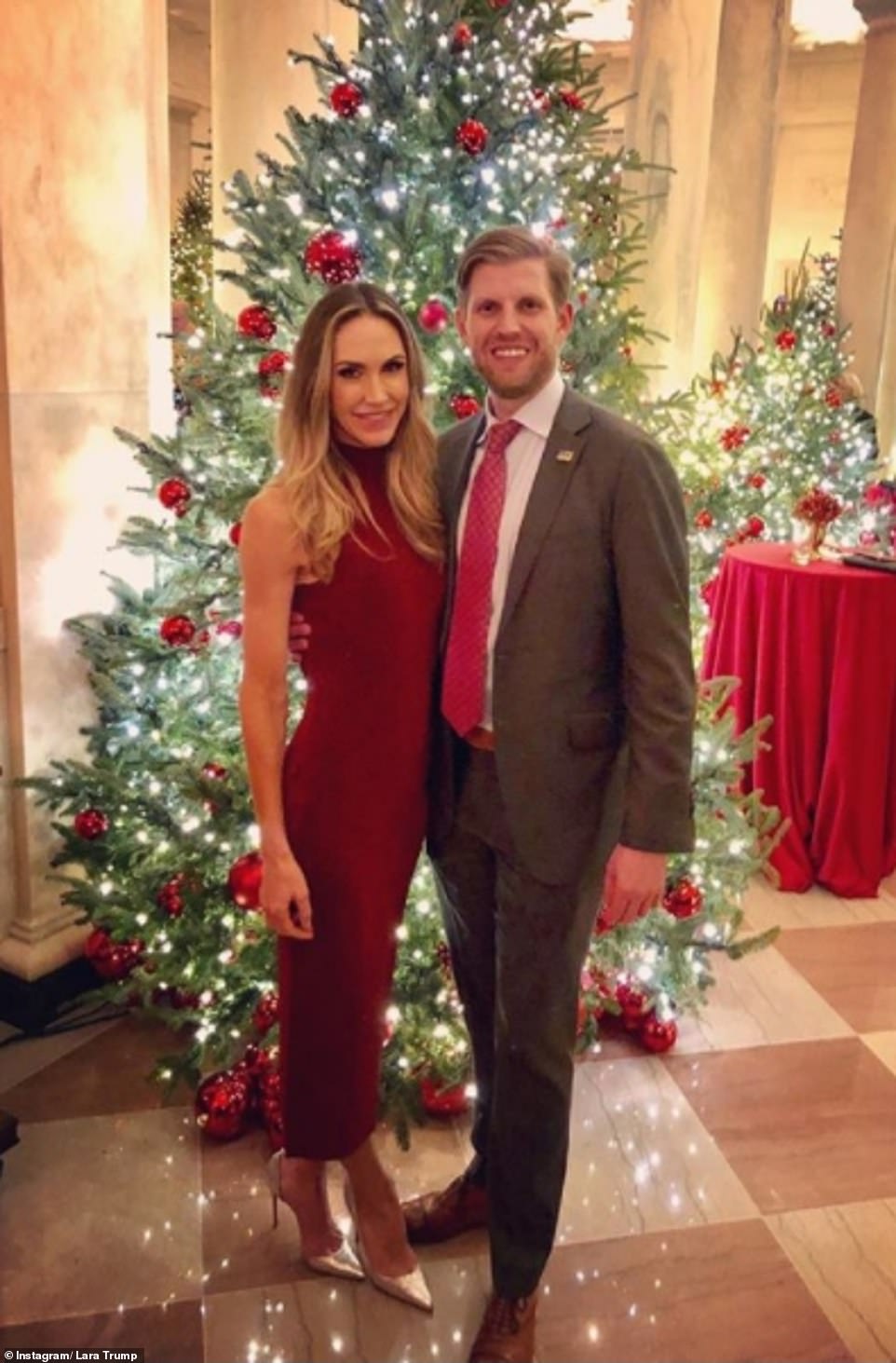 Lara Trump shared this sweet snap next to Eric in front of a Christmas tree, along with the caption: ‘Merry Christmas’ 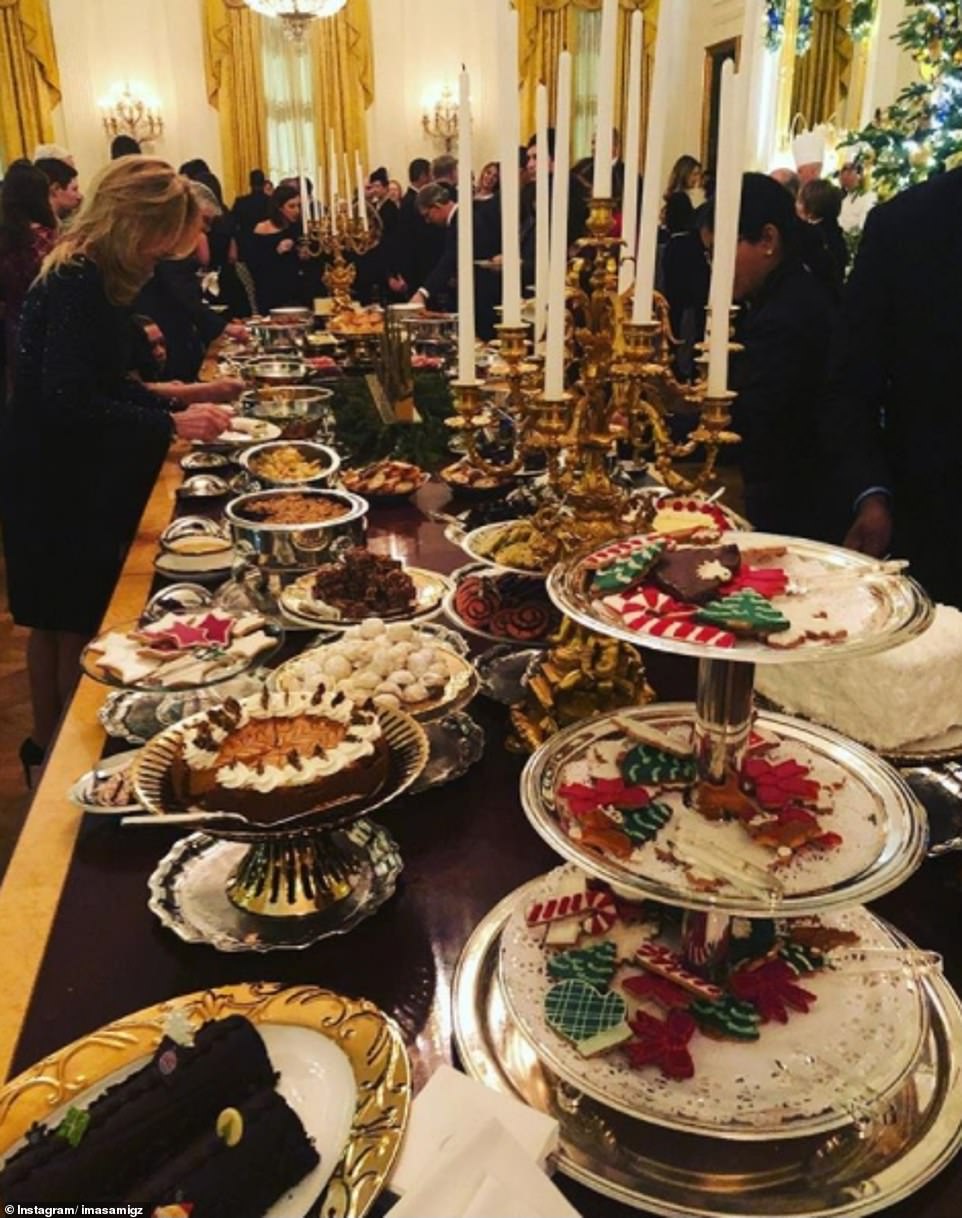 The first family appeared to have had a lovely evening despite the conflict and mounting claims he and the Trump Organization broke campaign laws.

On Thursday, the president was revealed to be the third man who attended a 2015 meeting with former personal lawyer Michael Cohen and National Enquirer boss David Pecker. The group was said to have forged a plan to keep Trump’s alleged affairs out of the press.

The meeting, which was referenced in a letter federal prosecutors sent to National Enquirer publisher American Media Inc, included an offer by company CEO to ‘help deal with negative stories about the presidential candidate’s relationships with women’.

With Trump identified as having been there, it means he was present when a plan was developed that ultimately led to Cohen pleading guilty to a felony and getting three years in jail.

It also led to Pecker’s cooperation agreement by AMI with prosecutors not to be prosecuted ‘for any crimes’ related to campaign finance law resulting from the meeting.

Trump, therefore, is now the only person in the room who claims that the hush money wasn’t used to impact the outcome of the election.