A woman has for the first time completed the grueling 53-week qualification course to become a Green Beret, setting her on track to join one of the last all-male sections of the armed forces.

In 2016, the Pentagon officially opened all combat and Special Operations jobs to women but no one has, until now, ever qualified to serve in those units.

Several women have attempted to join the elite special forces, some of them coming very close.

The unnamed woman passed a 53-week course to qualify as a Green Beret. Pictured are participants in a Special Forces Assessment and Selection course at Camp Mackall, NC

The woman will graduate on July 9, Military.com confirmed.

A Special Forces Engineer Sergeant (18C) with the 3rd Battalion, 20th Special Forces Group, the female soldier’s graduation will be guarded with an extraordinarily high level of secrecy, SOFREP reported.

Her achievement was noted by Elise Stefanik, Republican congresswoman for New York and the ranking member of the House Armed Services Committee.

‘Important milestone and the first of many,’ she tweeted.

Some commentators on Twitter expressed skepticism at her achievement, with one asking whether she had had to meet the same standards.

The unit was created in the 1950s with the primary mission of what would later be called ‘unconventional warfare’ — the covert assistance of foreign resistance forces and subversion of local governments.

‘Operatives train the militia in a variety of tactics, including subversion, sabotage, intelligence collection and unconventional assisted recovery, which can be employed against enemy threats.’

Elise Stefanik confirmed the news on Twitter on Thursday

By contrast, the much smaller Delta unit is designed to execute ‘small, high-intensity operations of short duration’ like raids and capture missions.

‘This achievement is a testament to this soldier’s individual strength, courage and commitment, and also an important institutional milestone for U.S. Special Operations Command as it embraces the cultural change that will continue to make it the most successful and elite Special Operations Force in the world,’ Stefanik said.

The female soldier reportedly solidified her graduation by passing a three-week exercise known as the ‘Robin Stage,’ which is a North Carolina-based field exercise that puts candidates into a simulated guerrilla warfare scenario.

Soldiers have to rely on previous training, analysis and relationship building with ‘friendly foreign forces’ in order to survive the task.

In December it was announced that a woman had passed the Navy SEAL officer training course. She was ultimately not selected, however. 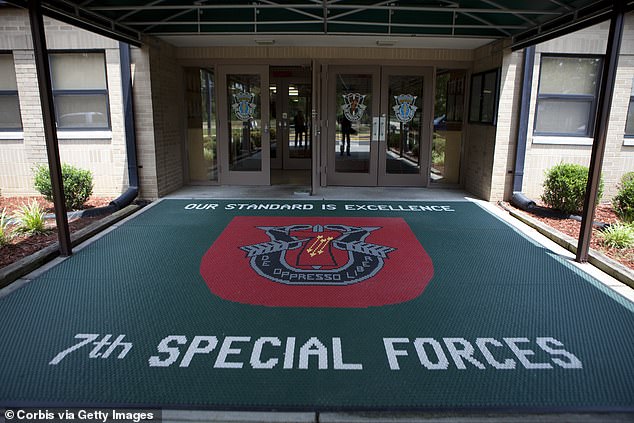 The entrance of the building of the 7th Special Forces at Fort Bragg. Fort Bragg is located just west of Fayetteville, North Carolina

Resistance to Carter’s 2015 announcement was strong.

A voluntary survey conducted by the Rand Corp at the time polled more than 7,600 of America’s special operations forces operators, and almost all said they did not want women in their units.

They argued that allowing women to serve in Navy SEAL, Delta Force or other Tier 1 units could hurt their effectiveness and lower the standards, and it may drive men away from the dangerous posts.

More than 700 female soldiers have now been allowed into previously restricted combat jobs out of the roughly 65,000 women in the Army.

In 2017, a woman was accepted into the Army’s 75th Ranger Regiment, an elite light infantry unit that operates alongside the Army’s most prestigious commando teams under the Joint Special Operations Command.

More than a dozen women have graduated from the Army’s arduous Ranger school, including Capt. Kristen M. Griest, who became the Army’s first female infantry officer in 2016.

‘I do hope that, with our performance in Ranger school, we’ve been able to inform that decision as to what they can expect from women in the military,’ Captain Griest said when she graduated in 2015.

‘We can handle things physically and mentally on the same level as men.’

Women have been seeking inclusion in the elite units for decades.

Captain Kathleen Wilder became the first woman to be eligible for the Army’s Special Forces in the 1980s, but was told just before graduation that she had failed a field exercise and could not be a candidate for the military’s premier Unconventional Warfare unit.

She filed a complaint of gender discrimination and Brigadier General F. Cecil Adams, who investigated it, determined that she had been wrongly denied graduation.