First-hand accounts by Americans living in Berlin during the Second World War have revealed how Germans fell under Hitler’s spell.

One US journalist described crowds of young nurses screaming their approval at the top of their voices as the Fuhrer vowed to ‘turn British cities to ash’.

A new book includes another account of how a brainwashed seven-year-old boy went door-to-door to demand money for the Nazi regime while doing Hitler salutes.

First-hand accounts by Americans living in Berlin during the Second World War have revealed how Germans felt under Hitler’s spell. Pictured: Women, children and servicemen give Hitler salutes on June 19, 1940, at an unknown location in Germany 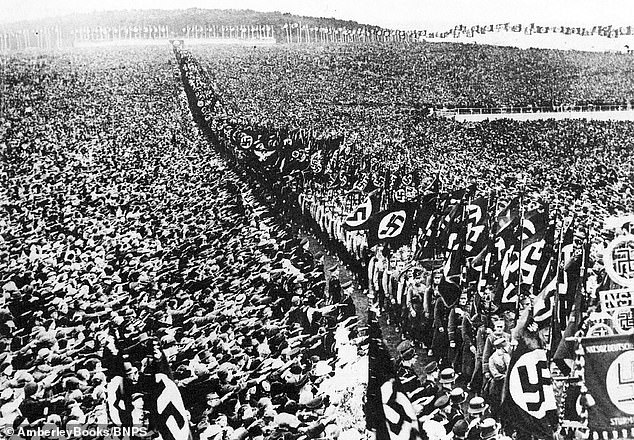 One US journalist described crowds of young nurses screaming their approval at the top of their voices as the Fuhrer vowed to ‘turn British cities to ash’. Pictured: A huge Nazi rally in Germany 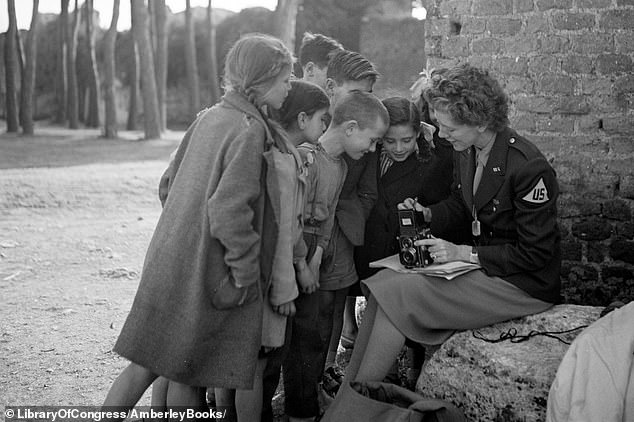 British historian Robert Lyman has trawled through the diaries and correspondence of more than 50 Americans living in Berlin between September 1939 and the end of 1941 to better understand life under the Nazis. Pictured is US photographer Toni Frissell, known for her moving wartime pictures

Surprisingly, American journalists were granted an almost free rein to write what they saw fit about daily life under the fascist regime. This is because Hitler was convinced the US could be an asset to him by persuading Britain to surrender.

After war was declared, Britons living in the German capital were interned or sent home. But US citizens, due to their country’s neutral status at that point, were able to carry on living there without restrictions – and write about the horrors they encountered.

British historian Robert Lyman has trawled through the diaries and correspondence of more than 50 Americans living in Berlin between September 1939 and the end of 1941 to better understand life under the Nazis.

The accounts, which are published in ‘The Rise of the Third Reich’, shed new light on the enormous power of Nazi propaganda.

Mr Lyman uncovered a fascinating exchange between an American journalist Bill Shirer and his German maid, who asked him why the British were bombing her city.

The maid, who had been indoctrinated by the Nazi regime, believed the Luftwaffe only bombed military targets – and avoided civilian areas.

Mr Shirer wrote: ‘I asked “will the British come over tonight?”

‘”For certain”, she sighed resignedly. All her confidence, all the confidence that five million Berliners had that the capital was safe from air attack, is gone.

‘”Because you bomb London”, I said. “Yes, but we hit military objectives, while the British, they bomb our homes”. 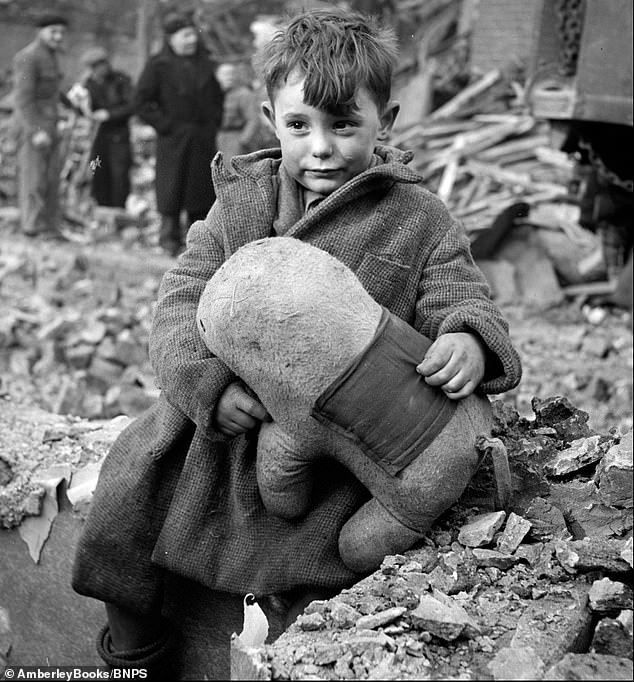 uncovered a fascinating exchange between an American journalist Bill Shirer and his German maid, who asked him why the British were bombing her city. Pictured: A British boy sits in rubble during the Blitz

‘She was a good advertisement for the effectiveness of Goebbels’ propaganda.

‘”Maybe you bomb their homes too”, I said.

‘”Our papers say not”, she argued. She said the German people wanted peace.

‘”Why didn’t the British accept the Führer’s offer?” she wanted to know.

‘This woman comes from a worker’s family. Her husband is a worker, probably an ex-Communist or Socialist.

‘And yet she has fallen a complete victim to the official propaganda.’

In another passage, Shirer said he witnessed German nurses and social workers leaping to their feet and screaming approval when Hitler said he would ‘turn the British cities to ash’.

He writes: ‘The war, of course, was blamed on Herr Churchill. Cheers and clapping.

‘The air attacks on Germany would be responded to by the levelling of British cities, turning them to ash.

‘When silence returned, he said: “We will stop the handiwork of these air pirates, so help us God”.

‘At this the young German women hopped to their feet and, their breasts heaving, screamed their approval. 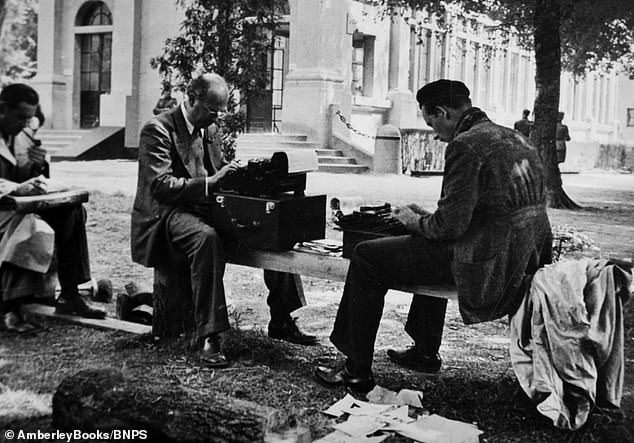 William Shirer (pictured, centre, at Compiègne, France in 1940) said he witnessed German nurses and social workers leaping to their feet and screaming approval when Hitler said he would ‘turn the British cities to ash’

‘”The hour will come,” Hitler went on, “when one of us will break, and it will not be National Socialist Germany”.

‘At this juncture the raving maidens kept their heads sufficiently to break their wild shouts of joy with a chorus of: “Never! Never!”‘

Another journalist, Howard Smith, described a disturbing encounter with a boy who came to his door to demand he donated to the Nazi Winter Relief Collection.

He said: ‘Children were easily the most fanatical of Hitler’s supporters, and the German leader made much of them.

‘They loved the tinsel and baubles of Nazidom, the marching, drums and trumpets.

‘They ached to get into the fight. It was always children, boys and girls, who made the rounds for the Nazi Winter Relief collections.

‘I have never seen so completely military a German as the little seven-year-old boy who knocked on my door one day and, when I had opened it, snapped to rigid attention, shot his arm high and shouted at me a falsetto “Heil Hitler!”

‘After which he asked me in the clipped sentences of a military command would I donate twenty pfennigs to “support the Fuehrer and the Fatherland in this, our life-and-death struggle”.’

As well as journalists, several hundred Quakers lived in Berlin who helped over 1,000 Jewish women emigrate to Australia.

They were well regarded by the Nazis for their work in helping starving Germans in the aftermath of the defeat in World War One.

One Quaker, 28-year-old Leonard Kenworthy, described the moment he was almost killed when the Allied bombs pulverised Berlin.

He wrote: ‘I decided to stay in my own bed when the sirens went off.

‘One night, however, when Berlin experienced a noisy raid, I decided that I would henceforth obey the sirens when they began their doleful wails.

‘Staying in my room was a fearful mistake. At one point it seemed as if a missile had zoomed into my stomach. I lay there a while as if paralysed, drenched in sweat.

‘Then I got out of bed, took my bag, and scurried to the shelter, determined thereafter to heed the warning signal as soon as it sounded.’

Former Army Major Mr Lyman, 55, from Windsor, Berks, said the American accounts of what was going on, which were reported back to their homeland and Britain, were of vital importance.

Without them, the happenings in the German capital would have remained a mystery. 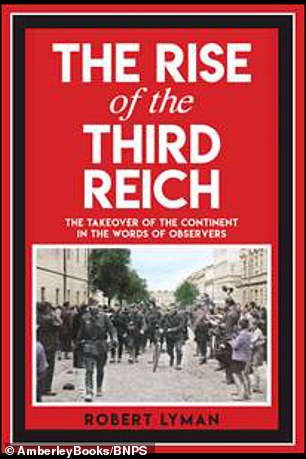 The accounts are described within the book, The Rise of the Third Reich: The Takeover of the Continent in the Words of Observers

He said: ‘These accounts were written in a time long before social media and the Nazi regime controlled the newspapers and radio.

‘As a result, you can see the level of indoctrination and fanaticism in Hitler and his regime.’

He added: ‘From going through over 50 memoirs and diaries it is clear that the Americans in Berlin quickly picked up on the horrors of the Nazi regime and saw it for what it was.

‘In contrast, what is often overlooked is that 99 per cent of the British people actually favoured appeasement in the 1930s.

‘At the outbreak of the war, all British people were persona non grata and put in internment camps or sent home.

‘All of a sudden, we had no accounts to tell the stories of what was going on within Germany and the occupied territories.

‘It was vitally important for Britain that these American observers provided this access.

‘It is remarkable how much freedom they were granted, because Hitler believed the United States would persuade Britain to surrender to Germany.

‘It was only after Germany declared war on the United States in 1941 that these Americans became persona non grata too.’

The Rise of the Third Reich: The Takeover of the Continent in the Words of Observers, by Robert Lyman, is published by Amberley and costs £20.