FIRST LOOK: Jane Seymour, 70, drives a vintage red BMW while in character on the set of Wild Harry after filming begins in Ireland

Jane Seymour has been pictured for the first time working on the set of upcoming Irish mystery thriller Harry Wild.

The 70-year-old actress will both star and co-executive produce the show for Acorn TV, a streaming service from AMC that focuses on British content.

Production on the show began this month in Dublin and is set to be released next year.

First look: Jane Seymour, 70, was spotted driving a vintage red BMW while in character on the set of her upcoming Irish mystery thriller Wild Harry, after filming began in Ireland

Jane was seen on the set wearing a brown jacket paired with a classic white turtle neck jumper.

The actress, who had her hair tied back, finished off her ensemble with a pair of plain black trousers.

In the new images, Jane was seen walking around the set of the upcoming show as well as conversing with a younger actor.

At one point, Jane climbs behind the wheel of a vintage red BMW, with filming cameras visible in the distance. 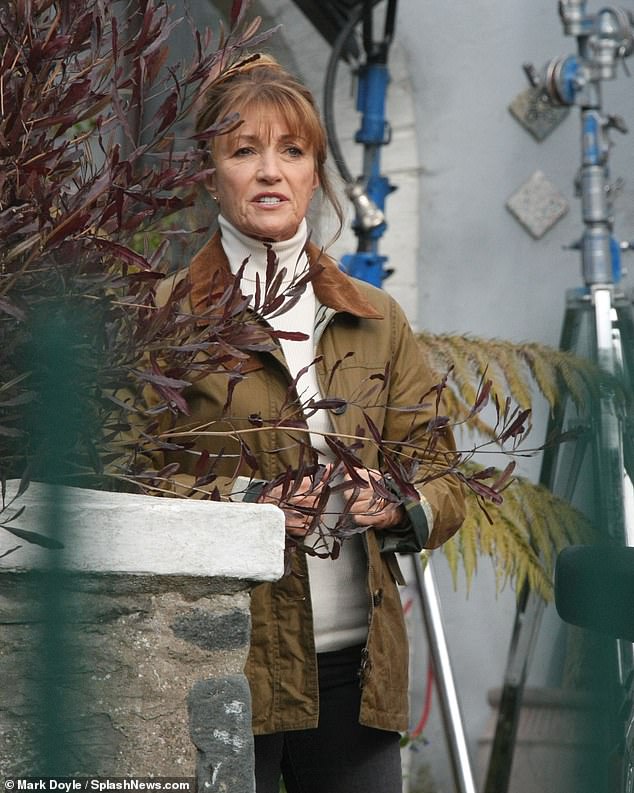 Down to business: Production started on Wild Harry this month and it was announced that Jane would both star and co-executive produce the series

In the eight-part Wild Harry, Jane is set to play retired English professor Harriet ‘Harry’ Wild, who finds herself recovering from a mugging at the home of her son, who works as a police detective.

While staying at her son’s house, she becomes entwined in a murder investigation that he is working  on.

Speaking about the project, Jane said that she had fallen in love with Harry Wild from the moment she read the script.

Daniel March and Klaus Zimmermann, who are co-executive producing the series alongside Jane, said: ‘We are thrilled that the amazing Jane Seymour will be bringing the foul-mouthed, cigarette smoking, whiskey drinking character of Harry Wild to life.’

In March, not long after her 70th birthday and before production on Harry Wild began, Jane was spotted heading out for dinner with her partner David Green.

She displayed her ageless beauty as she arrived at Sunset Strip in Los Angeles with her partner.

The actress exuded elegance in a figure-hugging red dress and patterned shawl draped over her shoulders as she arrived at the French restaurant, Tesse, making full use of the relaxed dining rules in Los Angeles.

She clutched a complementing nude purse as she styled her caramel tresses in a straight hairstyle and wore natural make-up.

The British-born actress made sure to protect herself from coronavirus in a black face mask while her partner dressed smart in a blue shirt and black blazer. 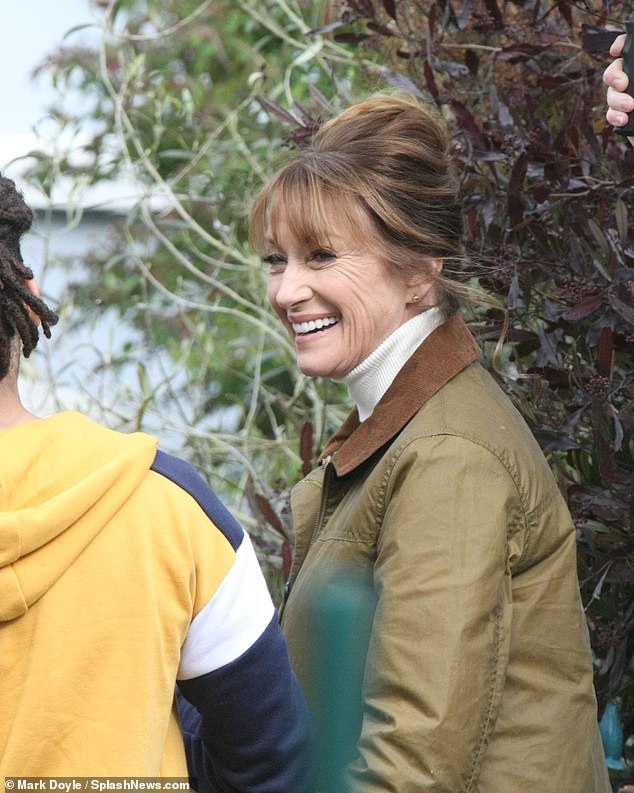 Happy: Jane shared a light-hearted moment with a younger actor while on the set