She is set to star as a young nurse names Kate in the six-part period drama.

And, Michelle Keegan wore a vintage midi dress as she transformed into a 1950’s nurse to film scenes on the set of new BBC drama Ten Pound Poms in Australia, on Monday.

The former Coronation Street actress, 35, ditched her typically glamorous attire for the dowdy purple frock and a messy bun, roughly pinned together at the nape of her neck. 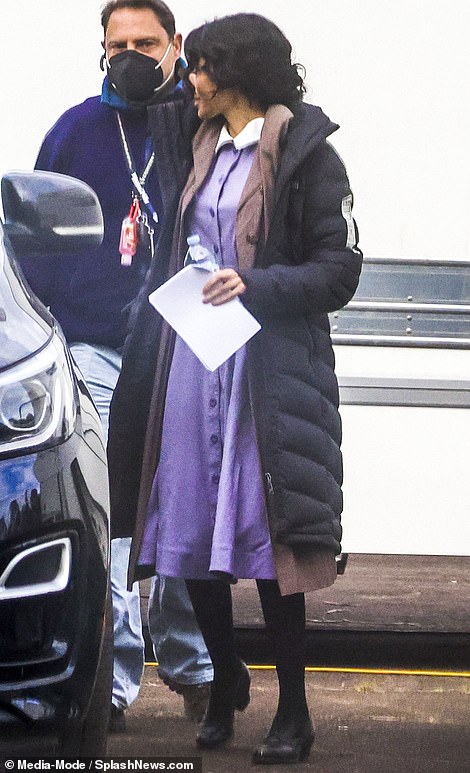 FIRST LOOK: Michelle Keegan, 35, wore a vintage midi dress as she transformed into a 1950’s nurse to film scenes on the set of new BBC drama Ten Pound Poms in Australia, on Monday

Michelle got into character in her button-through number, which boasted a white collar, nipped in waist and A-line skirt.

The TV star was seen strolling about on set in a retro pair of black heeled brogues teamed with opaque tights.

Keeping warm between takes during Australia’s winter, Michelle wrapped up with a padded black coat worn over a taupe layer.

While off-duty and arriving on set in Australia, the British babe slipped into a white T-shirt and black bomber jacket. 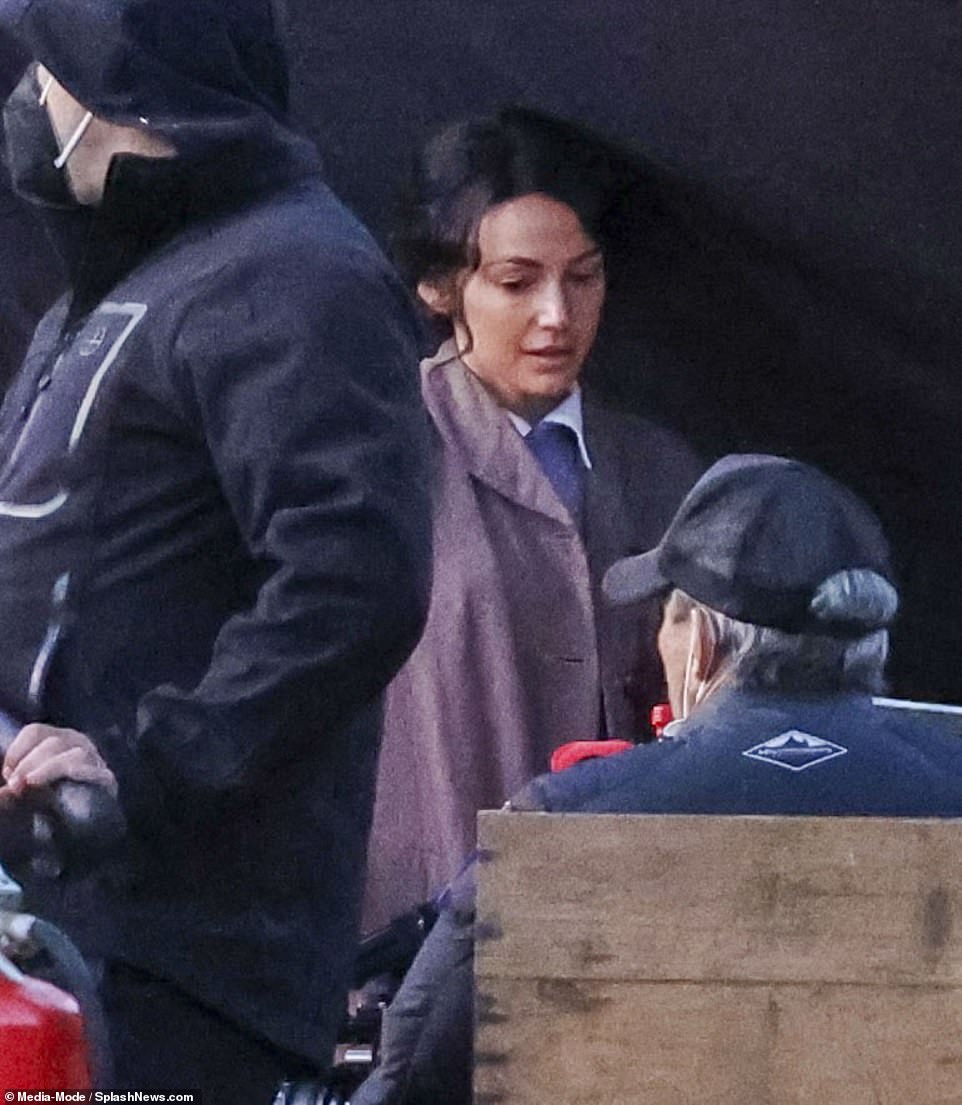 Transformed: The former Coronation Street actress ditched her typical glamour for minimal make-up and a messy bun, roughly pinned together at the nape of her neck 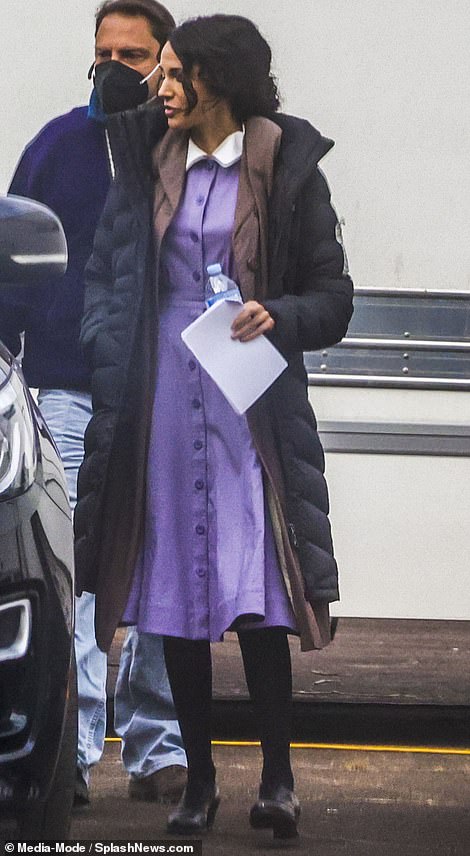 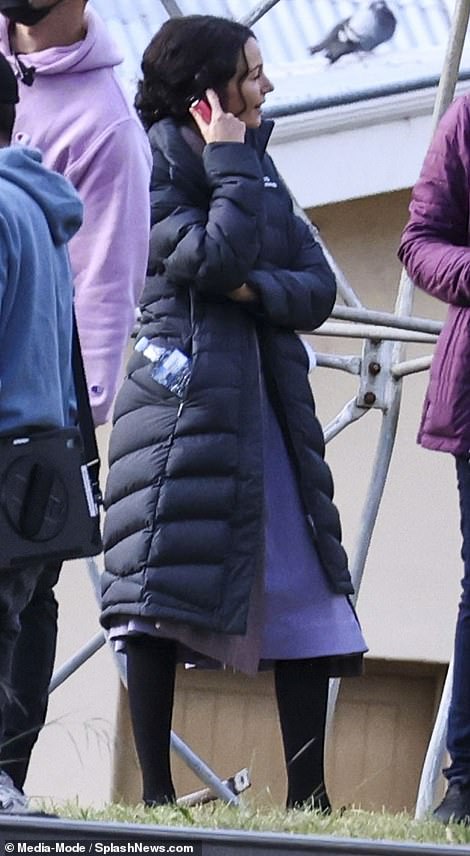 Retro: Michelle got into character as a young nurse named Kate in the dowdy purple frock 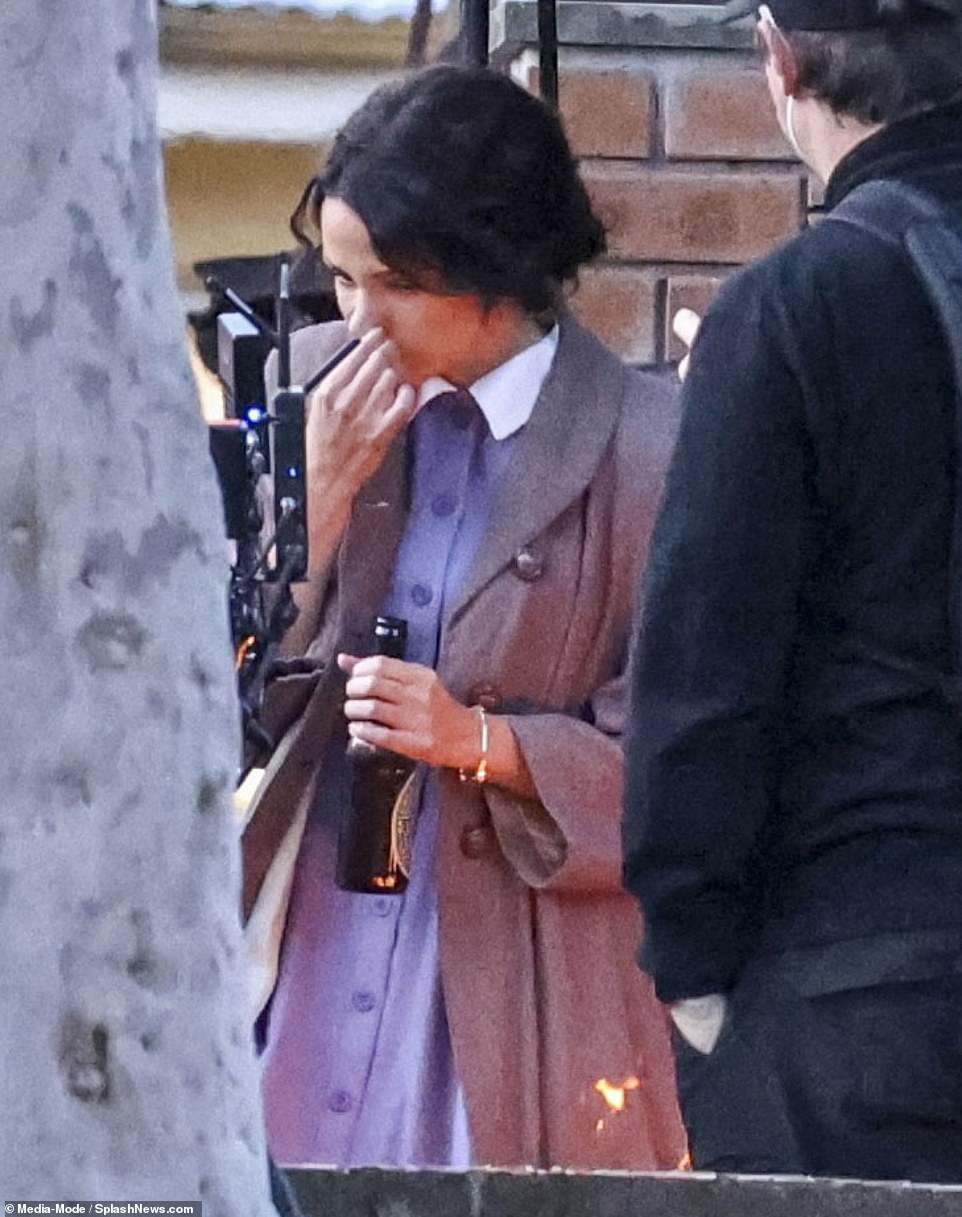 Checking it out: While holding a bottle of beer, Michelle watched back her scenes on a monitor 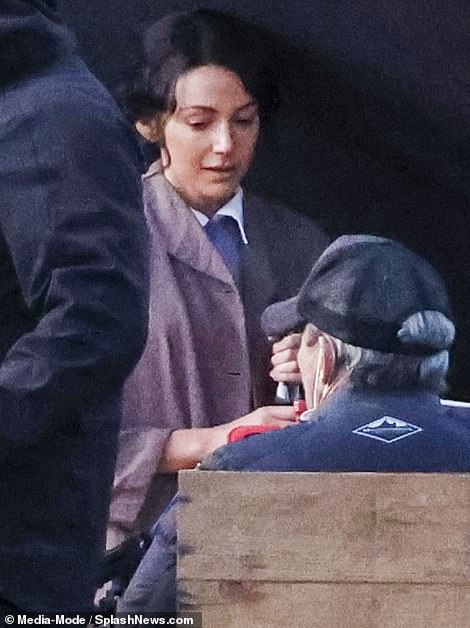 Ready for action: Michelle got into character in her button-through number, which boasted a white collar

She wore a pair of black skinny jeans and colourful trainers with her raven tresses styled sleek and straight as she grabbed a green juice.

Six-part series Ten Pound Poms follows a group of Brits as they leave dreary post-war Britain in 1956 to embark on a life-altering adventure on the other side of the world.

For only a tenner, they have been promised a better house, better job prospects and a better quality of life by the sea in sun-soaked Australia.

But life down under isn’t exactly the idyllic dream the new arrivals have been promised. Struggling with their new identity as immigrants, we follow their triumphs and pitfalls as they adapt to a new life in a new country, far from Britain and familiarity. 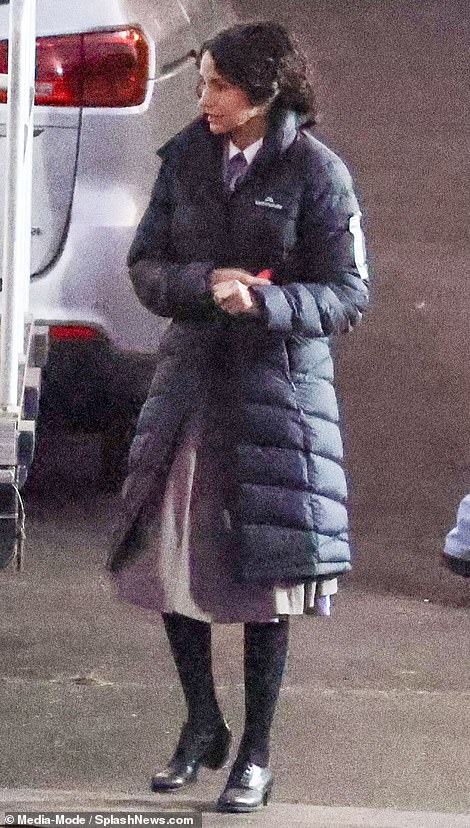 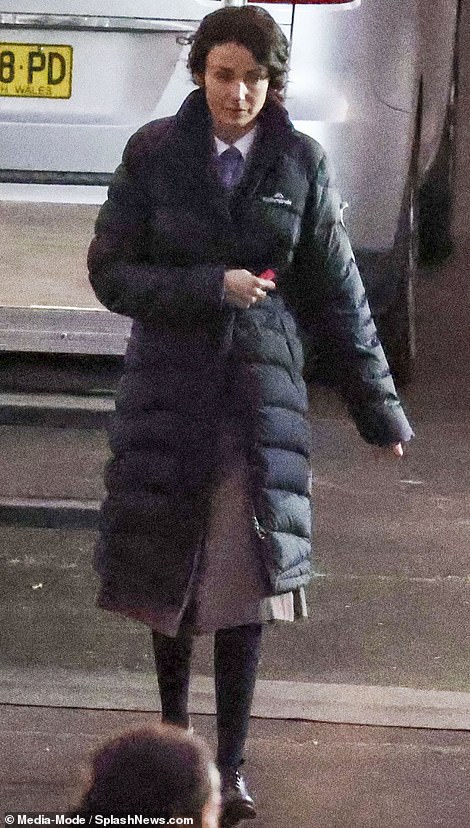 Vintage fashion: The TV star was seen strolling about on set in a retro pair of black heeled brogues teamed with opaque tights 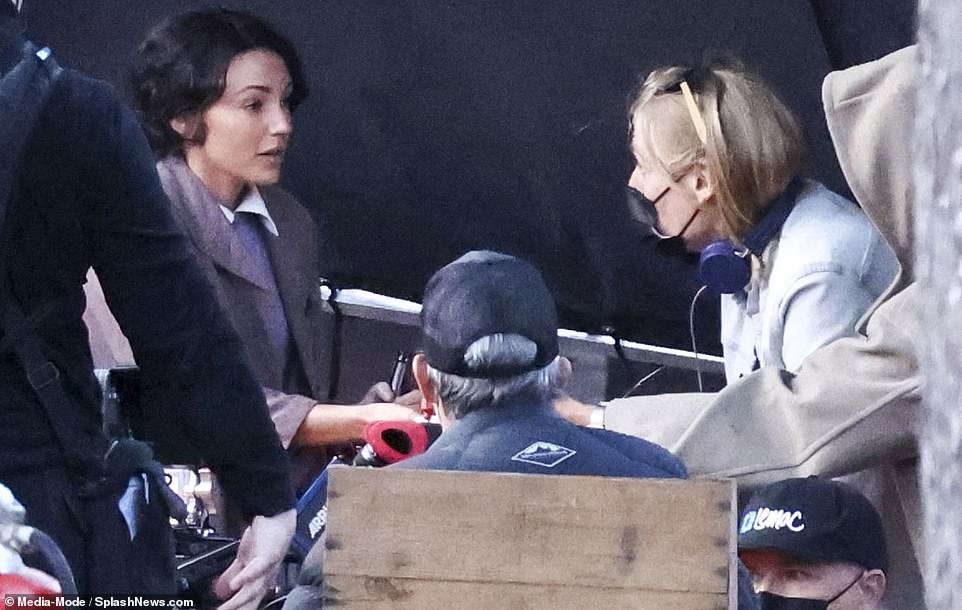 Guided: Michelle was guided through her scenes by crew members 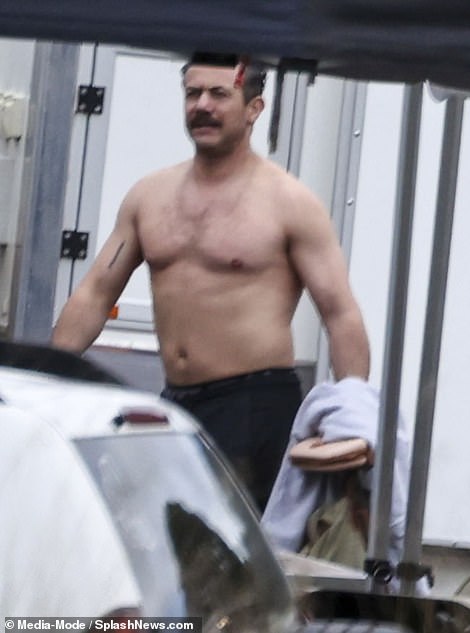 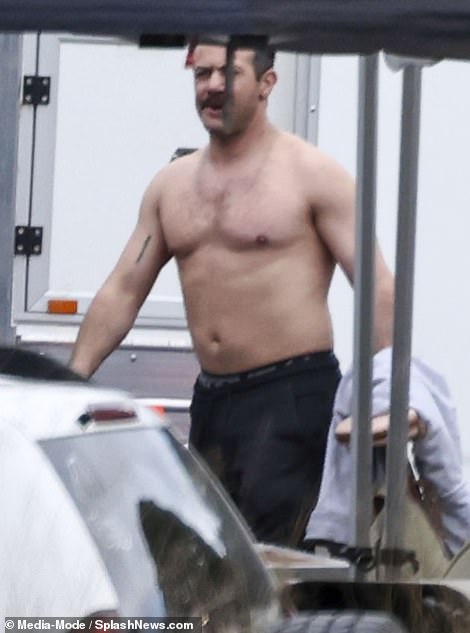 Leading man: Actor Warren Brown, who plays leading role Terry Roberts was spotted walking around without his shirt on 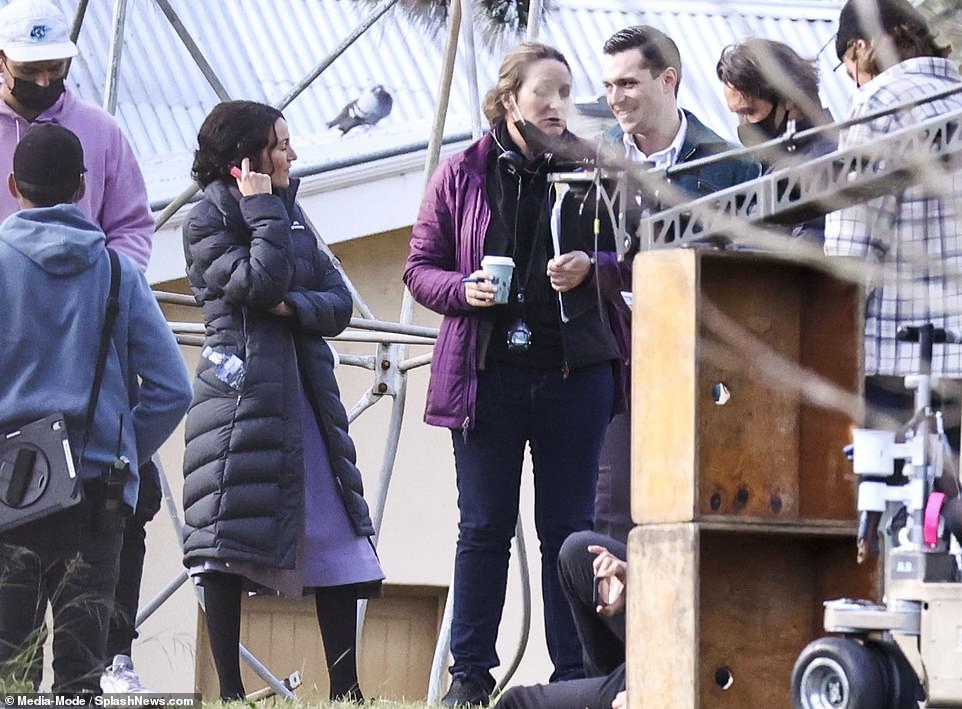 Fun times: Michelle smiled as she chatted to other members of the production

At the heart of the drama are Annie (Faye Marsay) and Terry Roberts (Warren Brown). They try to make the best of the situation for their family, but the poor living conditions at the migrant hostel and local attitudes towards immigrants test them in ways they couldn’t have imagined.

They aren’t the only people at the hostel avoiding the truth. Kate (Michelle Keegan) is a young nurse who arrives without her fiancé and will do whatever it takes to try and rewrite her devastating past.

Bill (Leon Ford) has lost his family business back home and is so desperate to prove he’s living the Australian dream that he’ll stop at nothing in order to get a lifestyle he can’t sustain.

Teenager Stevie (Declan Coyle) comes from a troubled background and hopes to use this new adventure to escape his oppressive father. Meanwhile, Ron (Rob Collins), an Indigenous Australian war veteran, struggles with feeling like an outsider in his own country. 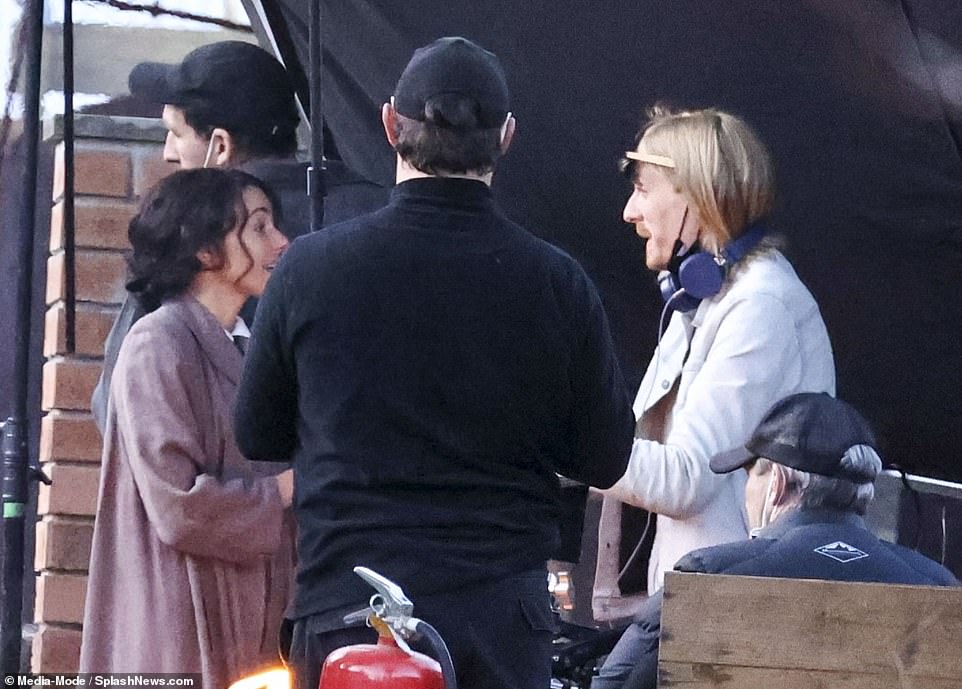 Catch ups: Michelle chatted to another crew member, while between scenes 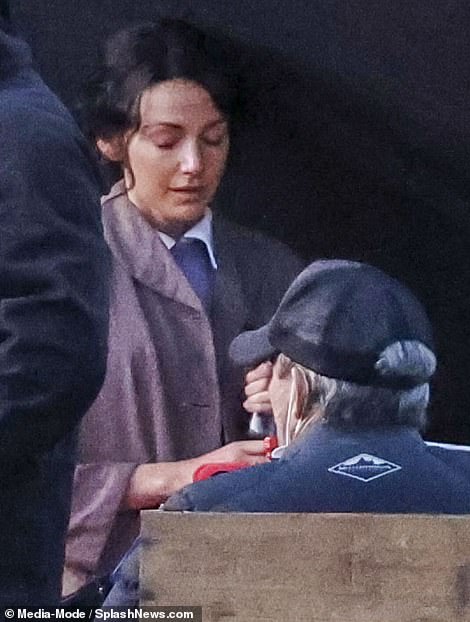 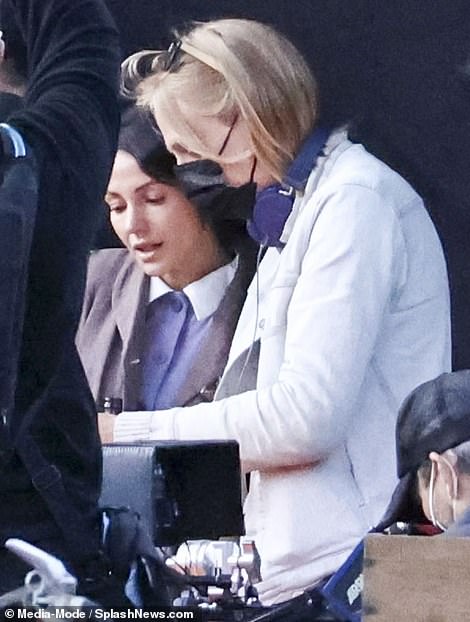 Making it perfect: Michelle look concentrated as she practised her part 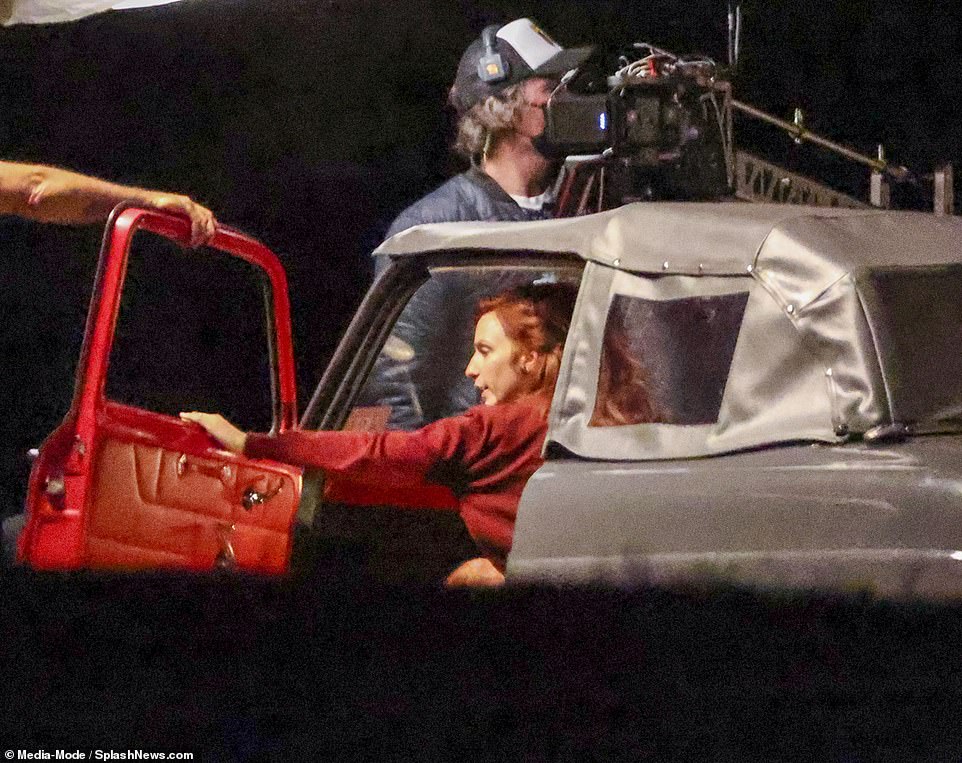 Vintage vehicles: Actress Faye Marsay was filmed getting out of a retro car

The first look at Ten Pound Poms comes after it was reported Michelle is to take in £2.5m from her TV work, as she and husband Mark Wright are thought to be TV’s richest young couple.

With an estimated combined net worth of around £12m, it’s no wonder the pair are splashing the cash into their luxe new ‘dream home’.

Michelle uses her own company, Rosia Promotions Limited, for her various TV work – with the actress filing accounts for the business on Friday. 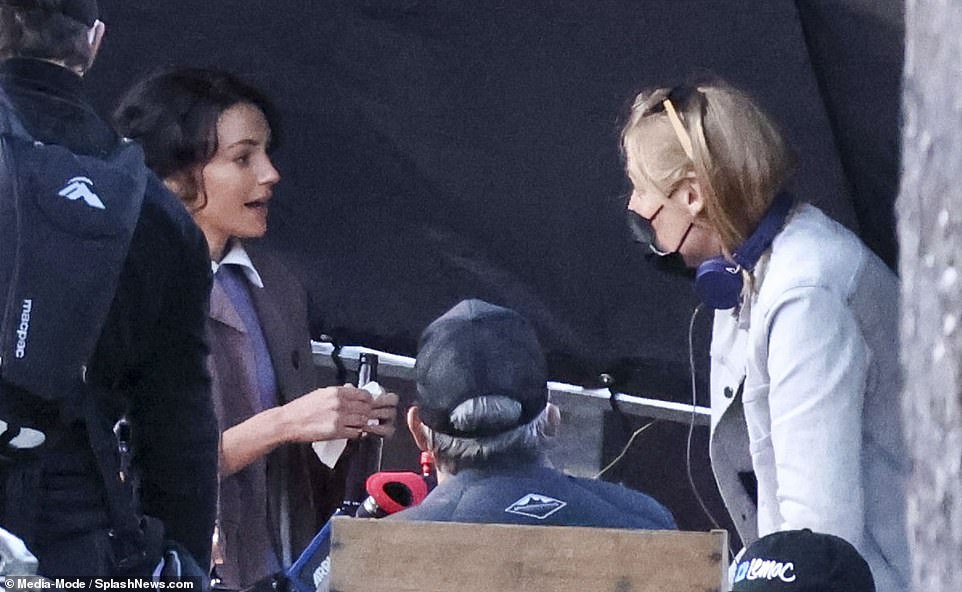 Chatting: Michelle chatted to one of the crew members between takes 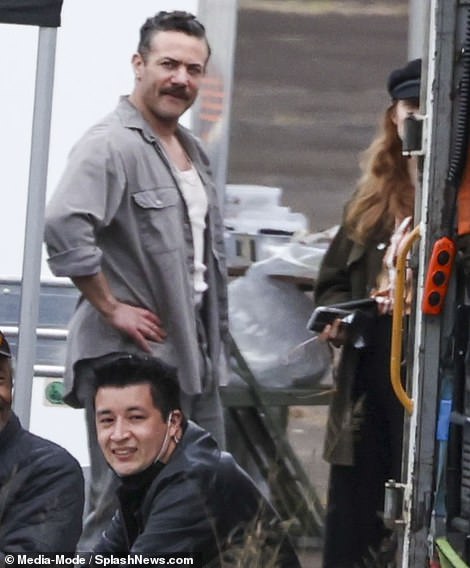 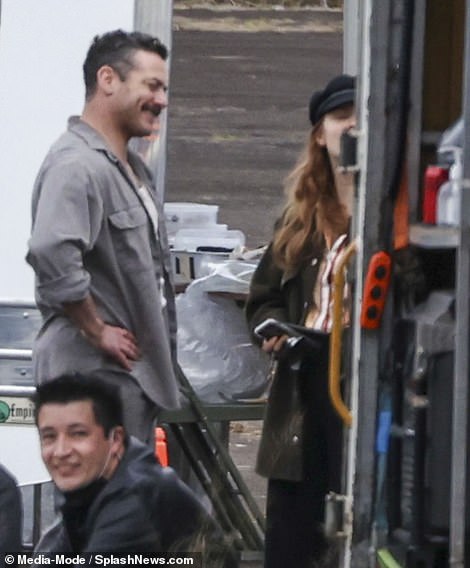 In costume: Actor Warren was spotted in a grey shirt with the sleeves rolled up 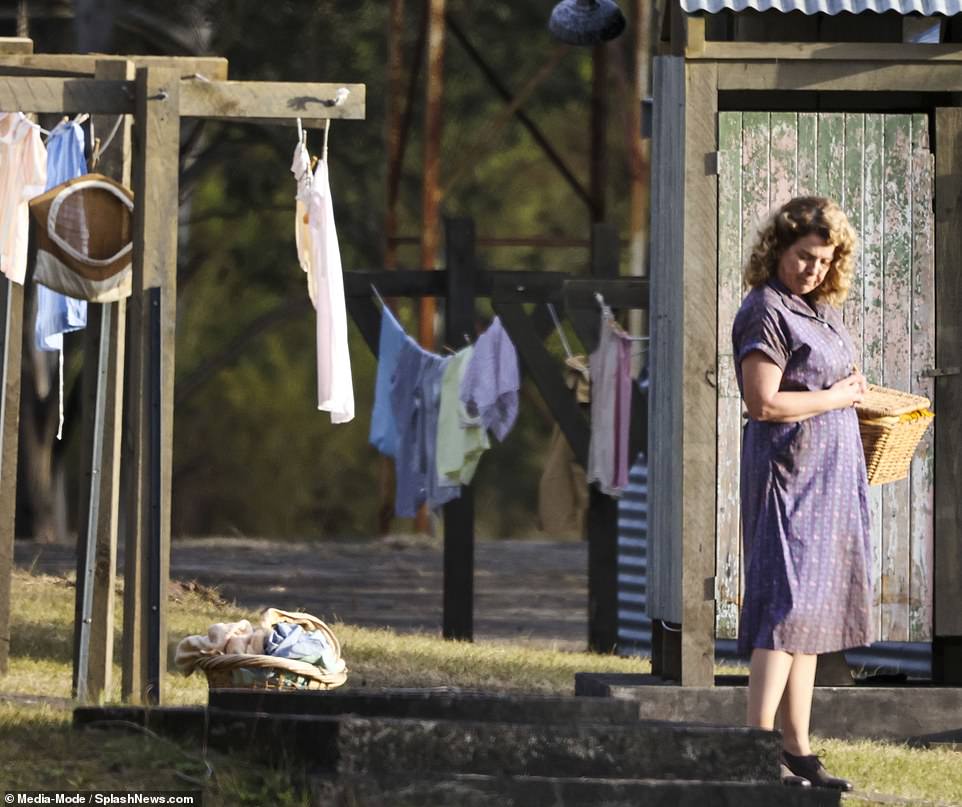 Vintage set up: The 1950s was perfectly recreated for the six-part series

And detailing her earnings up to the end of September last year, the document showed that the actress had taken in an impressive £2,530,922 in assets after earning £1,192,802 from acting.

It’s no surprise, as Michelle has become a household name after her long-standing stint in Coronation Street, followed by roles in Our Girl and Tina and Bobby. 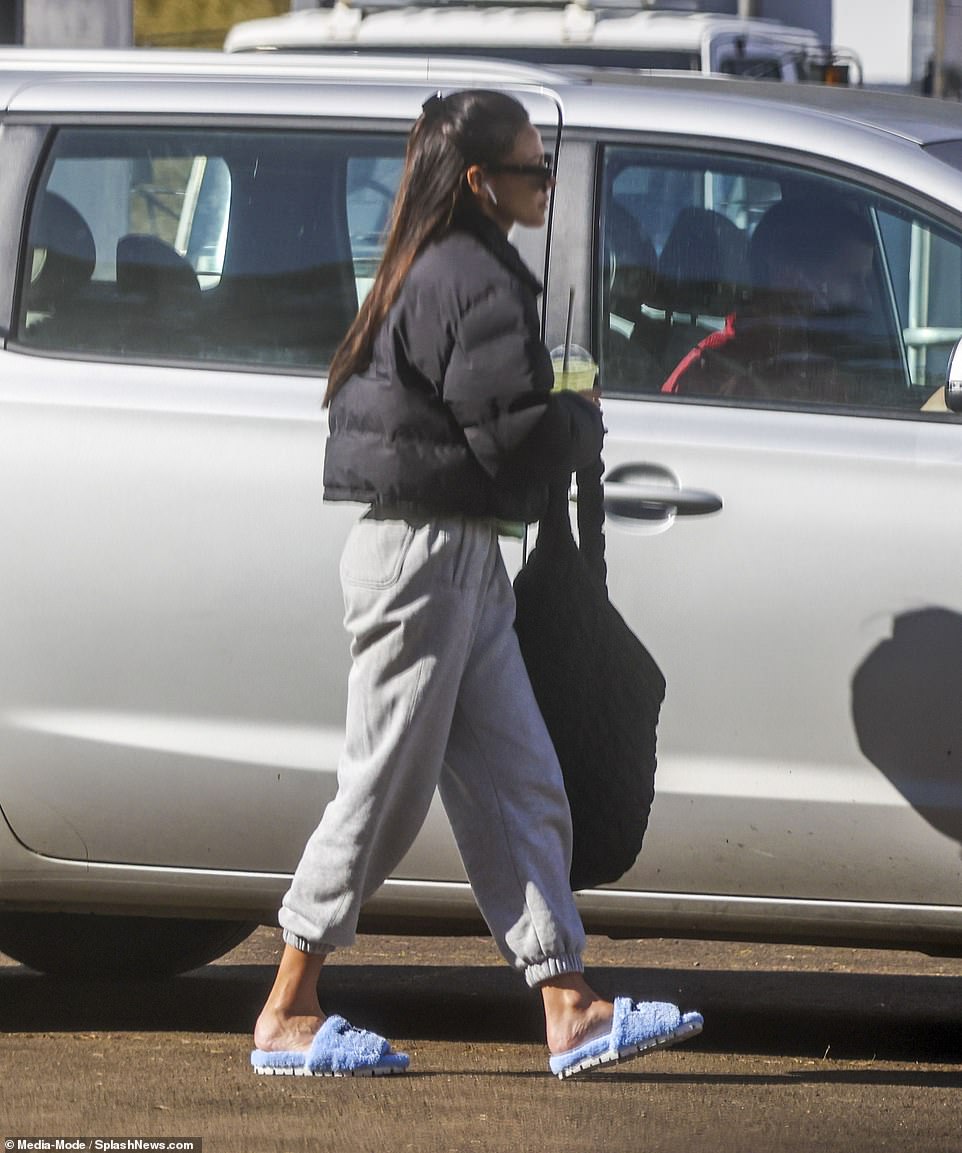 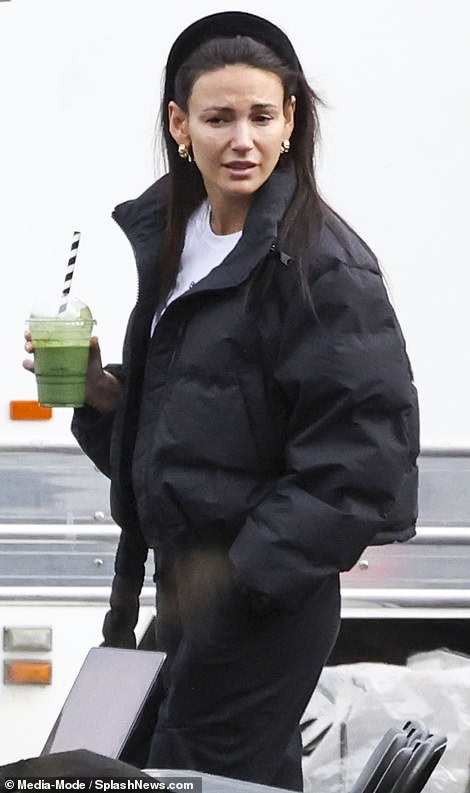 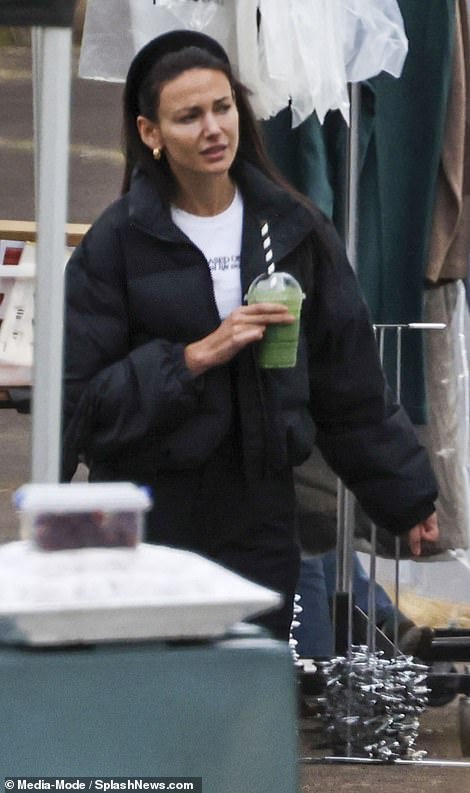 Health focused: Michelle was sure to pack in the goodness as she sipped on green juice 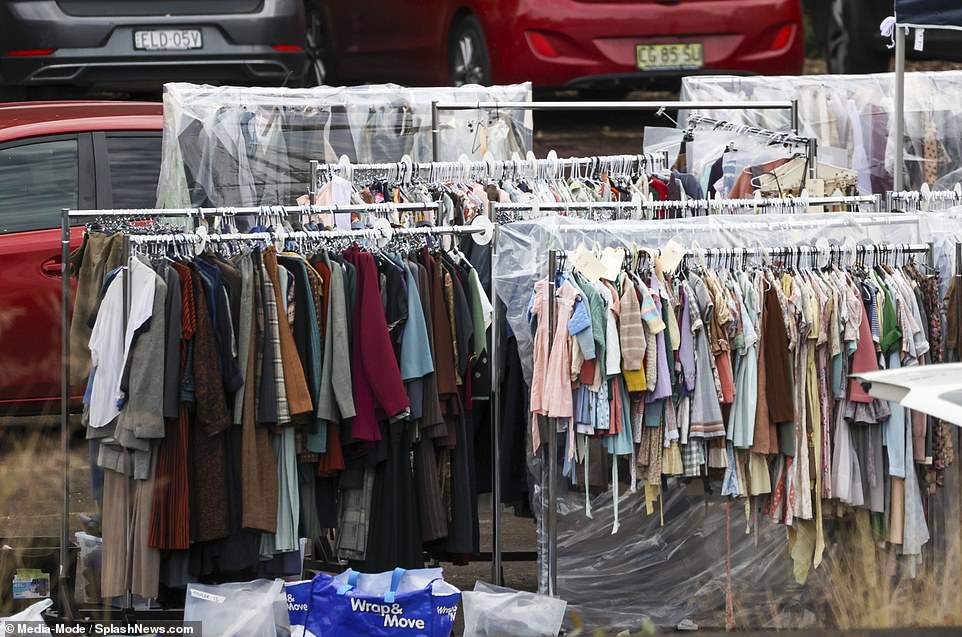 Wow! Thousands of 50s style vintage garments could be seen ready hanging up for the cast

And it’s only a portion of her joint fortune with husband Mark – as they are thought to have a joint net worth of £12m.

Splashing the cash, the pair have bought their ‘dream home’ – a £1.3million Essex mansion.

Mark and Michelle have been completely renovating the property since purchasing it in October 2019, and even have an Instagram account dedicated to the home.

Construction experts have estimated the demolition and rebuild of the home will cost around £3.5million. 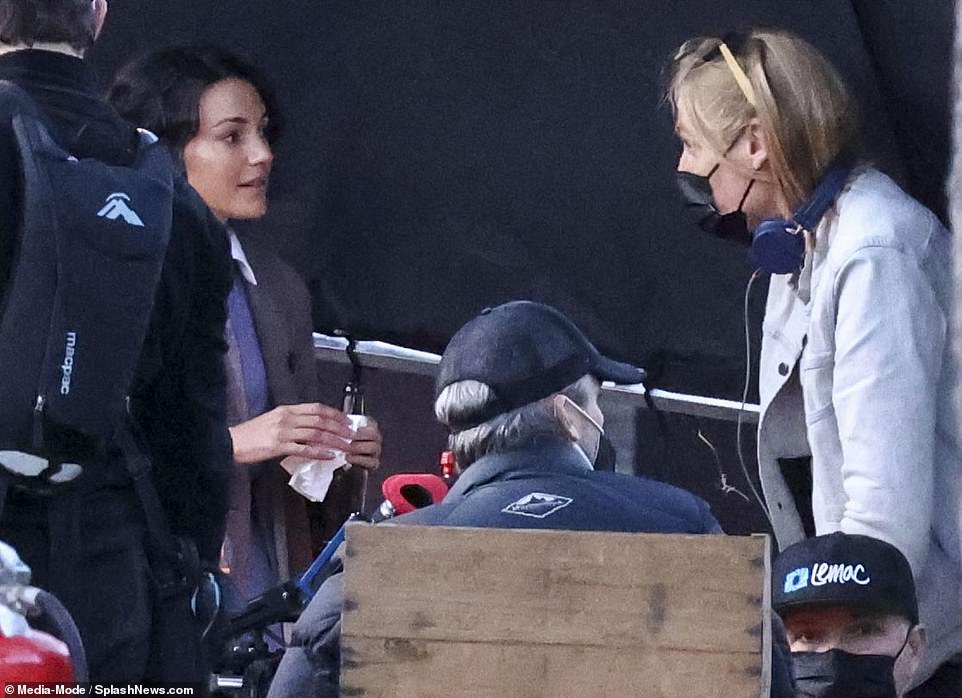 Taking tips: Michelle was guided through the filming by crew members on the set