A Qantas repatriation flight bound for Australia from coronavirus-ravaged India will be half empty after 40 passengers tested positive.

The plane will be the first to touch down in Australia in several weeks after the federal government imposed a travel ban on flights to and from India, which has recorded more than 300,000 daily coronavirus infections over the past three weeks.

The flight is due to leave New Delhi on Friday night and scheduled to touch down in Darwin on Saturday morning after 9am, where passengers will be whisked away to an old mining camp at Howard Springs to undergo two weeks of quarantine.

The flight’s capacity has been reduced to 150 passengers due to social distancing but more than 70 will be unable to fly.

The figure includes more than 40 passengers who tested positive for COVID-19 and around 30 close contacts.

An aircraft due to bring home the first group of the 9,000 Australians stranded in coronavirus-ridden India (pictured) will leave from the Northern Territory

Stranded citizens and permanent residents must test negative for COVID-19 before getting the green light to board a flight home.

A Qantas plane departed Darwin International Airport in the early on Friday afternoon, with just 12 hours to go before the federal government travel ban expires.

NT Chief Minister Michael Gunner confirmed on Friday the Howards Springs facility will be able to accommodate 2,000 quarantining people a fortnight by the end of June.

‘We’re expected 450 from India over the rest of May as well as 600 from London and Istanbul,’ he told Seven Network. 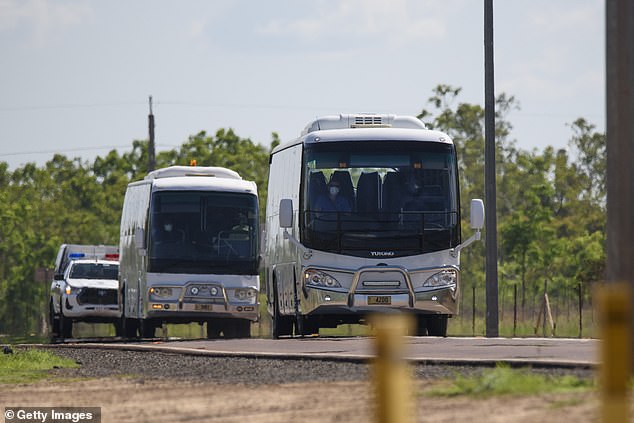 Three flights are expected to land in Darwin from India during May and early June (pictured, other passengers arriving there in October)

Mr Gunner said there was a lot of compassion in Darwin for the Australians and residents trying to get home.

The NT took in the first returning Australians in February last year from Wuhan, China, which was then the global epicentre of the Covid-19 outbreak.

There have never been any breaches at the facility.

‘No complacency,’ Mr Gunner said, ‘but we’ve set ourselves a challenge to always get better’.

On Thursday, the NT government warned the Covid-19 infection rate among those returning from India could be in the double digits.

About 200 repatriated Australians are expected to start their two weeks of quarantine at Howard Springs in the coming week.

They will be some of the most vulnerable cases among the 9,000 stranded in the Covid-ravaged sub-continent, which is racking up an average of 300,000 new infections a day.

NT health officials are preparing for 10 per cent of the passengers on Saturday’s flight to be infected – five times more than repatriation flights from other countries. 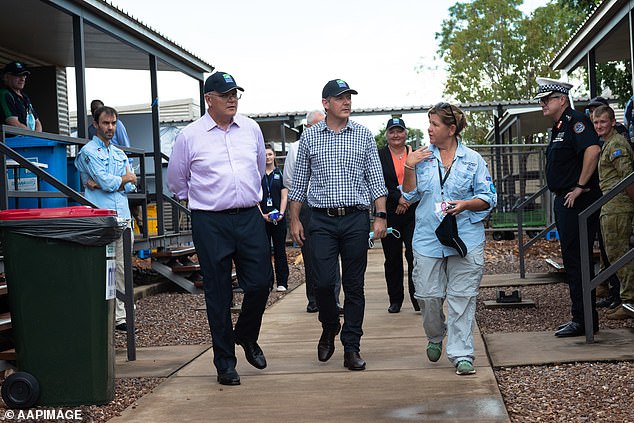 About 200 repatriated Australians are expected to start two weeks’ quarantine at Darwin’s Howard Springs facility once the travel ban is lifted on May 15 (pictured, Scott Morrison at the facility in April)

Three flights are expected to land in Darwin from India during May and early June.

That will push Howard Springs’ population to about 1,200 people and on track to 2,000 by the end of June

The facility can handle about 100 positive cases, but AUSMAT and NT Health teams hope to keep that number at 50.

About 490 people are quarantining at Howard Springs, where the number of people with coronavirus has fallen to five from more than 50 two weeks ago.