The leaders of the first migrant caravan slowly making its way through southern Mexico are demanding the country’s government provide vehicles to help its 4,000 participants reach Mexico City.

Exhausted from the long journey on foot and frustrated by the caravan’s slow pace, some migrants have been dropping out and returning home or applying for protected status in Mexico.

Aware of the low morale, the group’s representatives demanded ‘safe and dignified’ transportation to the capital Monday after the group arrived in the Oaxaca state town of Niltepec.

The Mexican government has shown no inclination to comply with the caravan’s  demands, however, with the exception of its migrant protection agency giving some of the group’s stragglers rides to the next town over the weekend.

Pueblo Sin Fronteras, a group supporting the caravan, has said it hopes to hold meetings in Mexico City with federal lawmakers and authorities as well as representatives of the incoming government to discuss migrants’ rights and the caravan’s future. 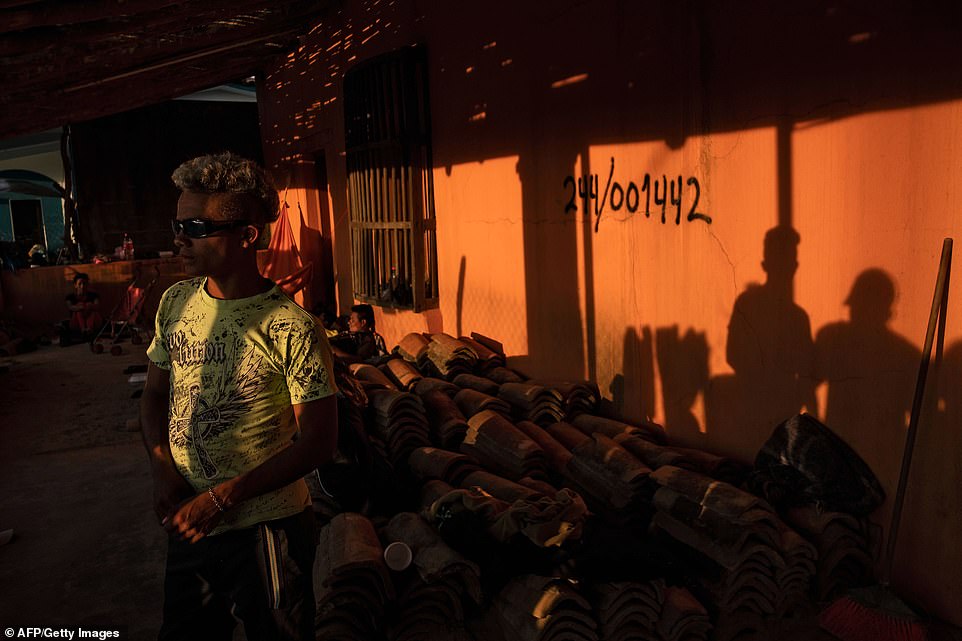 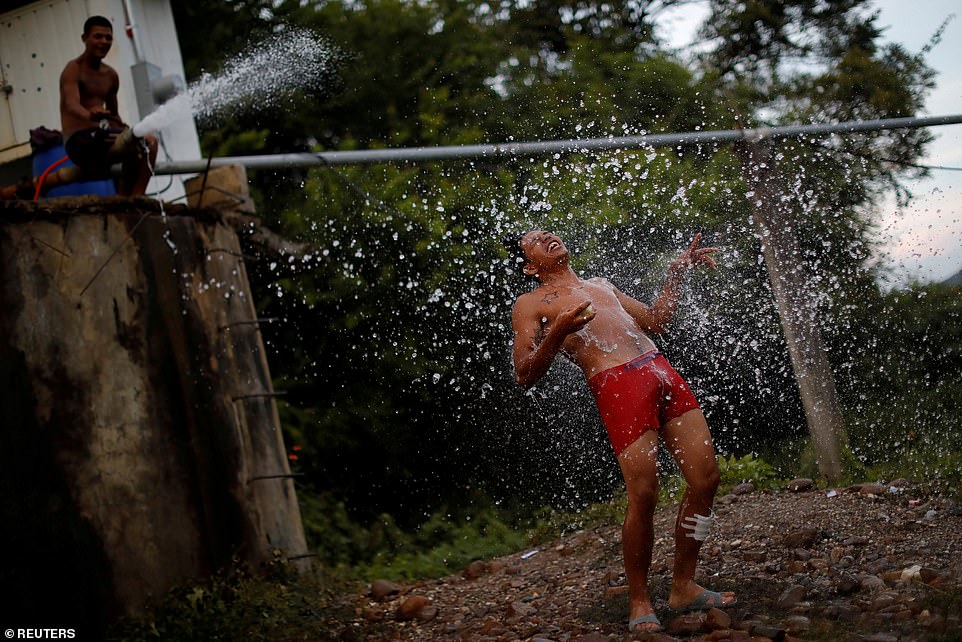 A migrant, part of a caravan of thousands traveling from Central America en route to the United States, takes a shower in Santiago Niltepec, Mexico 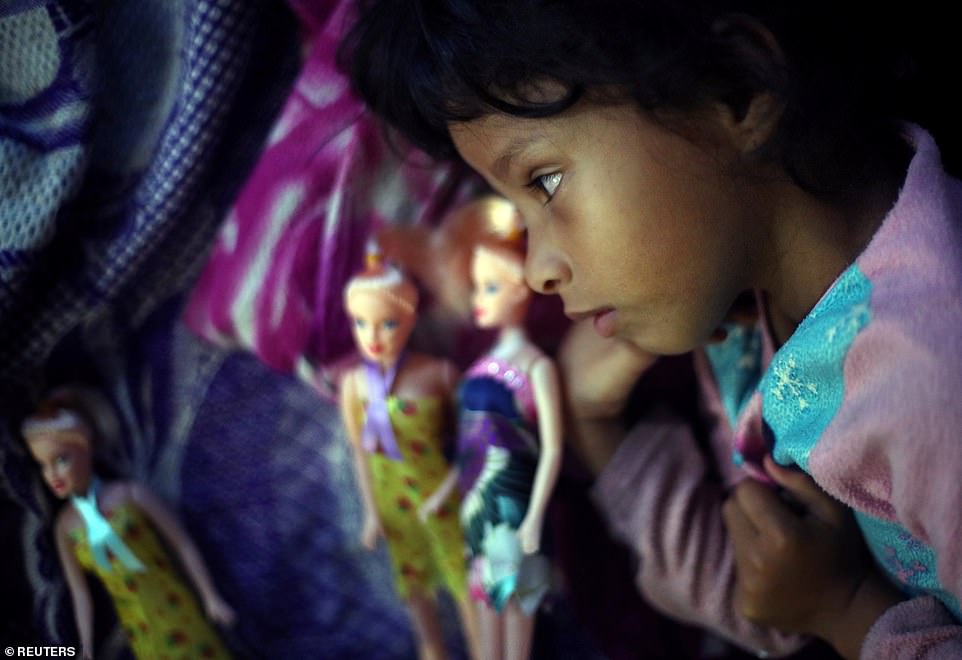 Genesis Cordona, a six-year-old migrant girl from Honduras, lays next to her dolls as she rests in Santiago Niltepec 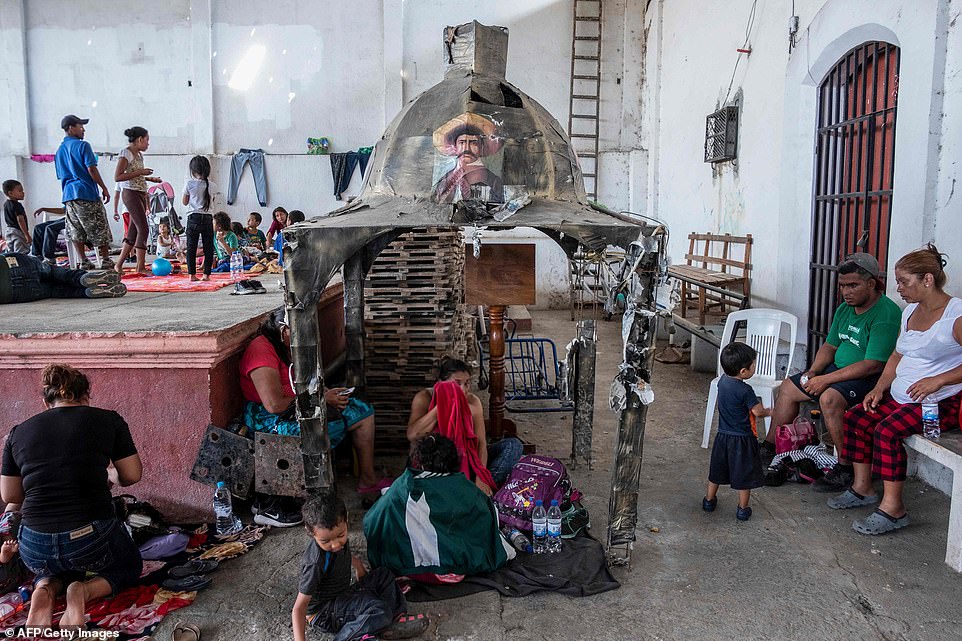 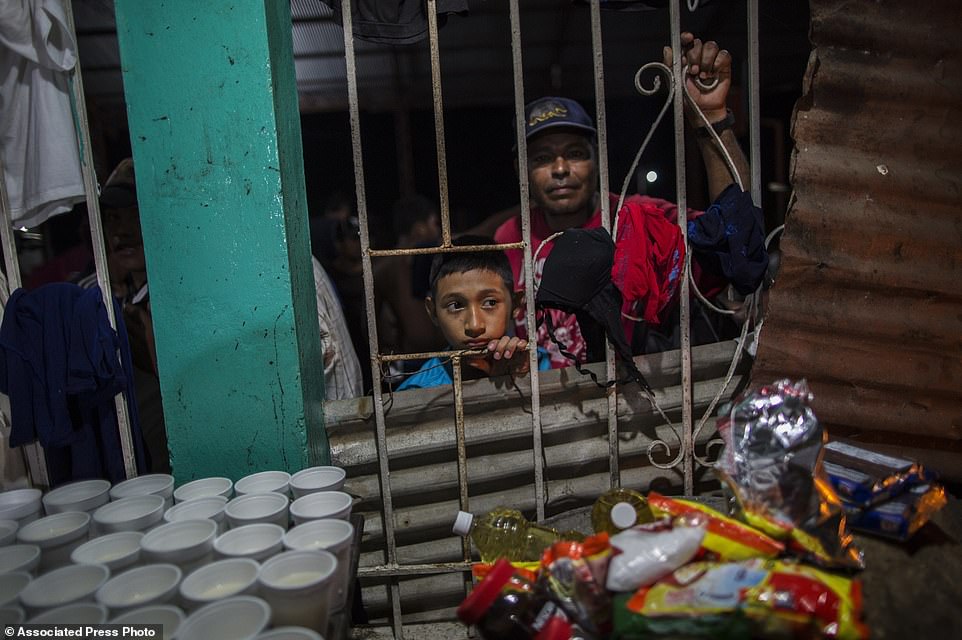 A boy look at women preparing dinner for Hondura’s migrants at a makeshift shelter in Ciudad Hidalgo, Mexico, Monday 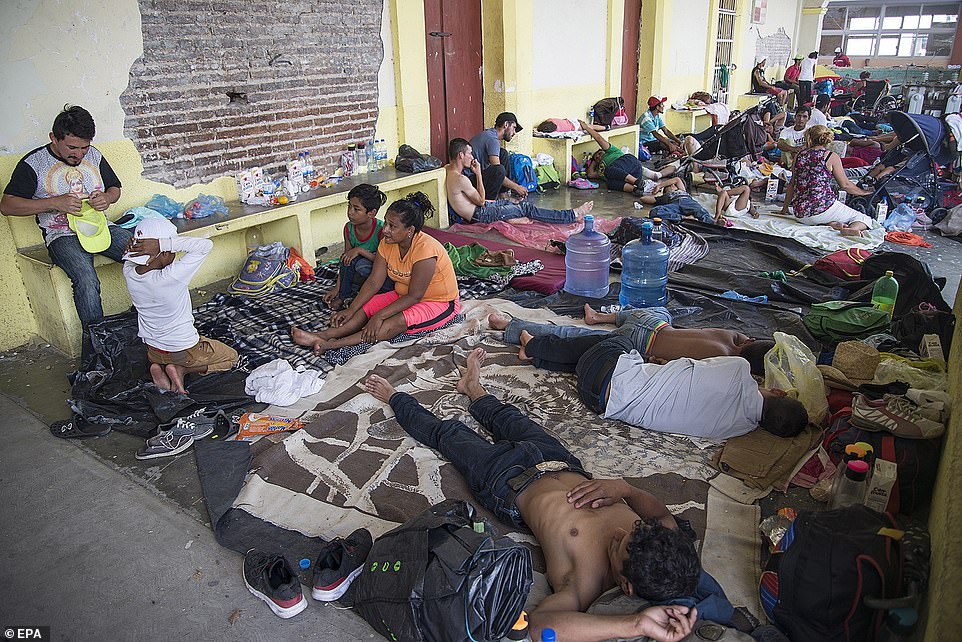 The first caravan has shrunk from 7,000 at its peak down to 4,000 due to exhaustion and slow progress 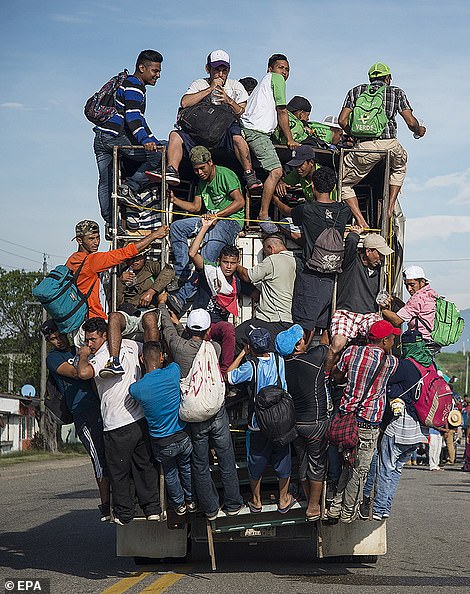 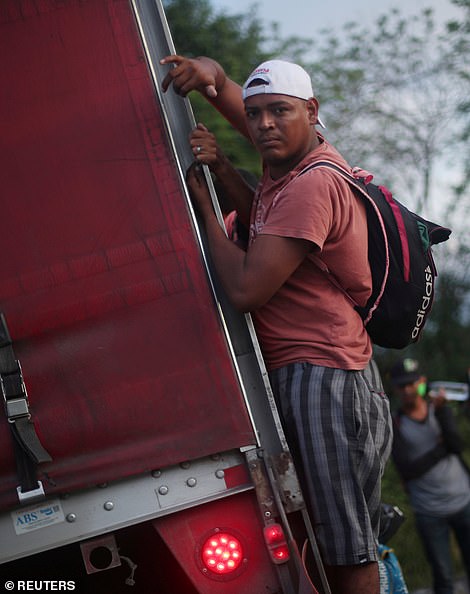 The migrants have appealed to the Mexican government to furnish them with transportation, but government has no plans to comply with their demands. Pictured:  migrants hitchhiking from Tepatepec to Niltepec Monday 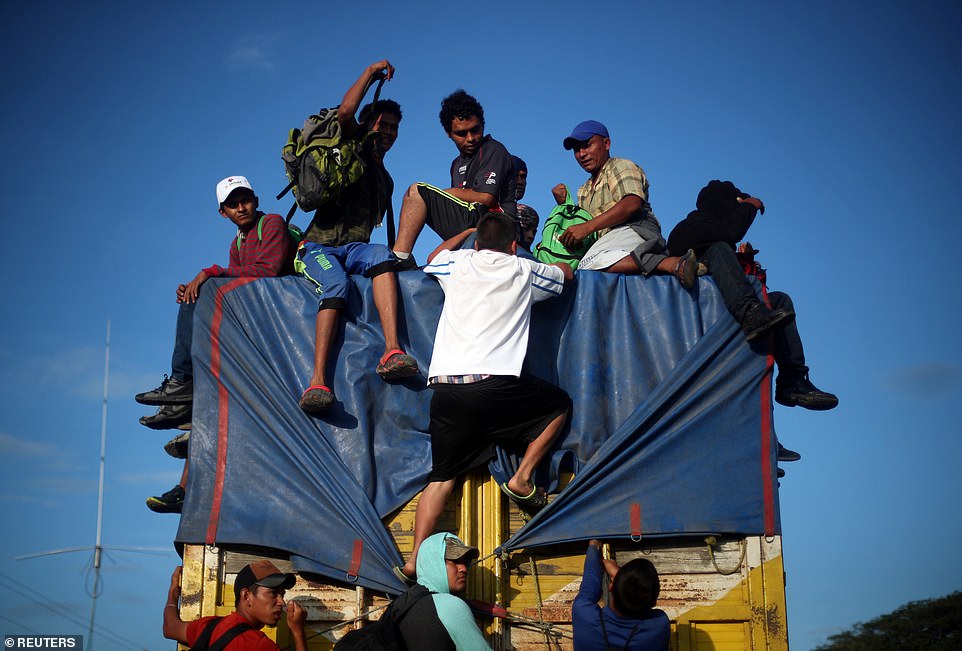 Exhausted from the long journey on foot and frustrated by the caravan’s slow pace, some migrants have been returning home, while others continued pushing on

But Mexican officials seem intent only on seeing the caravan melt away as it travels toward the US border, still more than 1,000 miles away. The government regularly boasts about the number of migrants who have applied for refugee status or asked to return to their home countries.

Meanwhile, a smaller second caravan of Central Americans stormed into Mexico, presumably with the intention of joining the first group.

On Monday, the Federal Police aggressively tried to turn back hundreds of migrants who crossed the Suchiate River to enter the country from Guatemala.

A low-flying police helicopter hovered overhead as the migrants waded in large groups across the muddy waters, apparently trying to use the downdraft from its rotors to discourage them.

Guatemala’s Noti7 channel reported that one man drowned and aired video of a man dragging a seemingly lifeless body from the river, but Honduran Vice Foreign Minister Nelly Jerez later told TV station Televicentro that the man was alive and being treated at a hospital in Tapachula, Mexico.

Once on the Mexican side, the migrants were surrounded and escorted by dark-uniformed officers as sirens wailed.

Mexican Interior Secretary Alfonso Navarrete Prida lamented what he called a second ‘violent attempt’ to storm the border, accusing people of placing the elderly, pregnant women and children at the front, putting them at risk of being crushed.

The Interior Department said in a statement that two Hondurans ages 17 and 22 were arrested Monday when one of them tried to shoot at police in the town of Ignacio Zaragoza, near the Hidalgo border crossing. It said the Glock failed to fire, and no agents were injured. 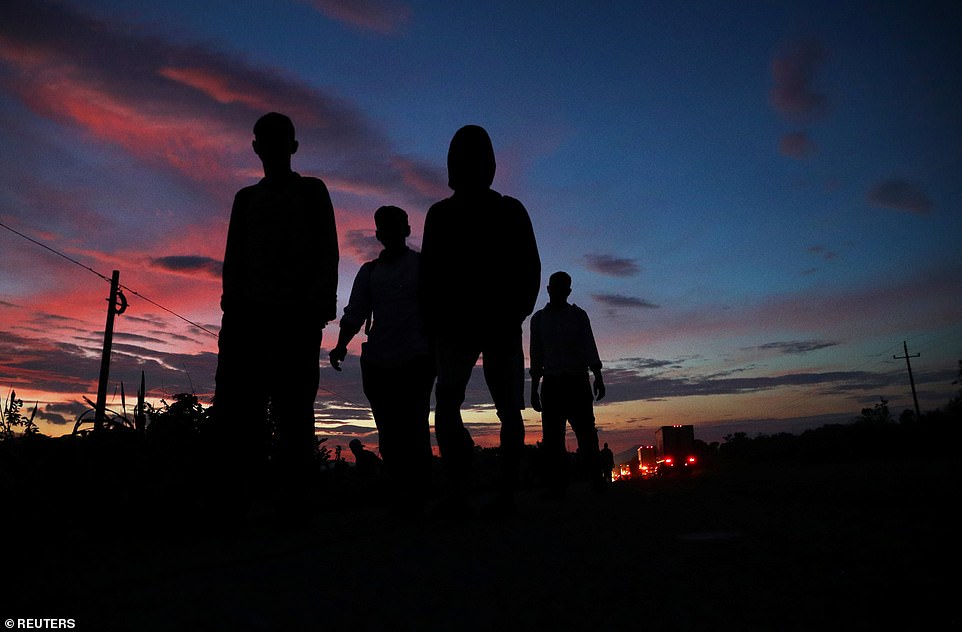 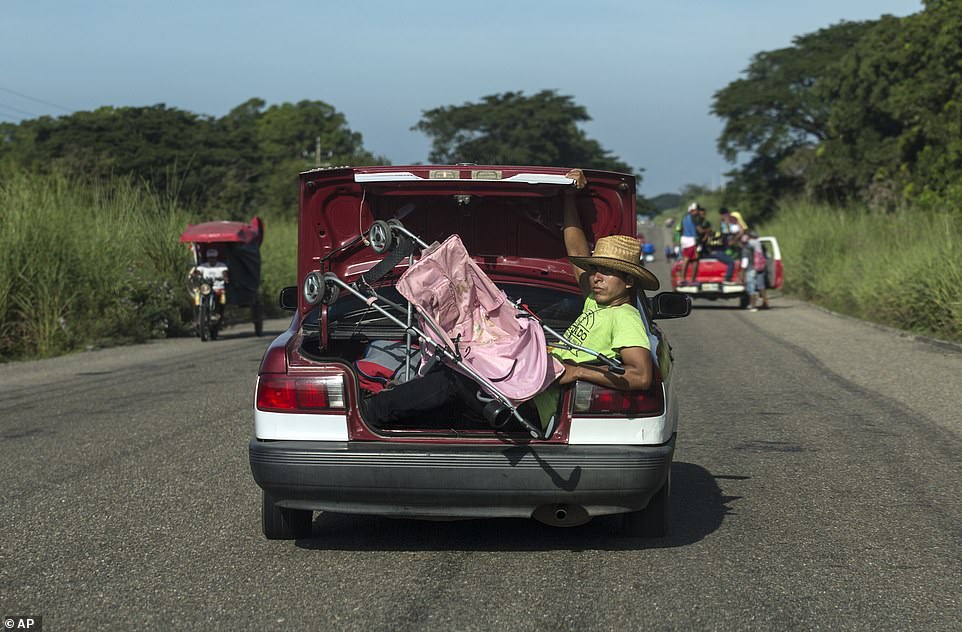 A man travels in the trunk of a car with a stroller as the caravan continues its slow march toward the US border, on the road between Tapanatepec and Niltepec, Mexico 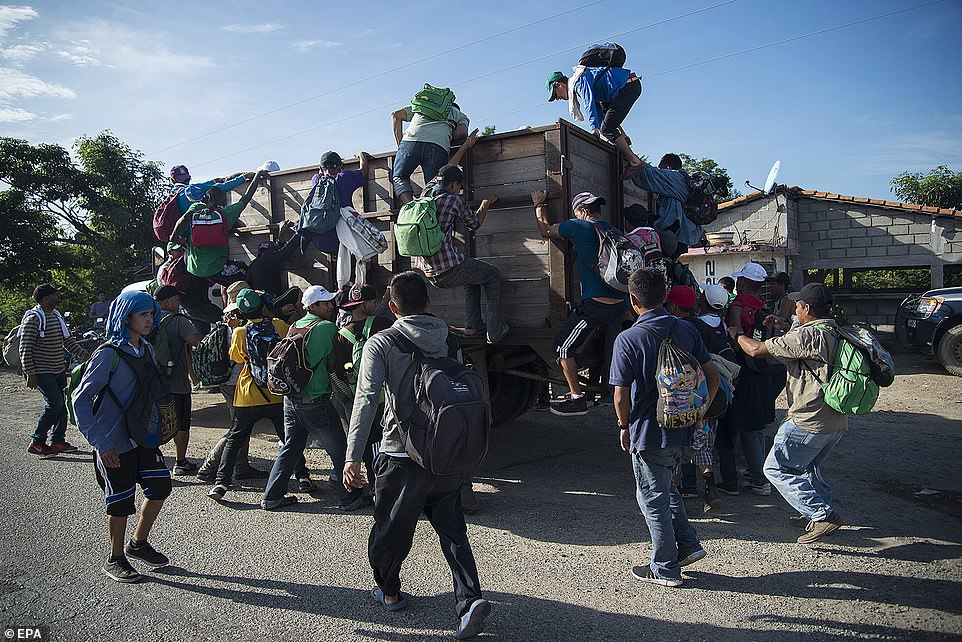 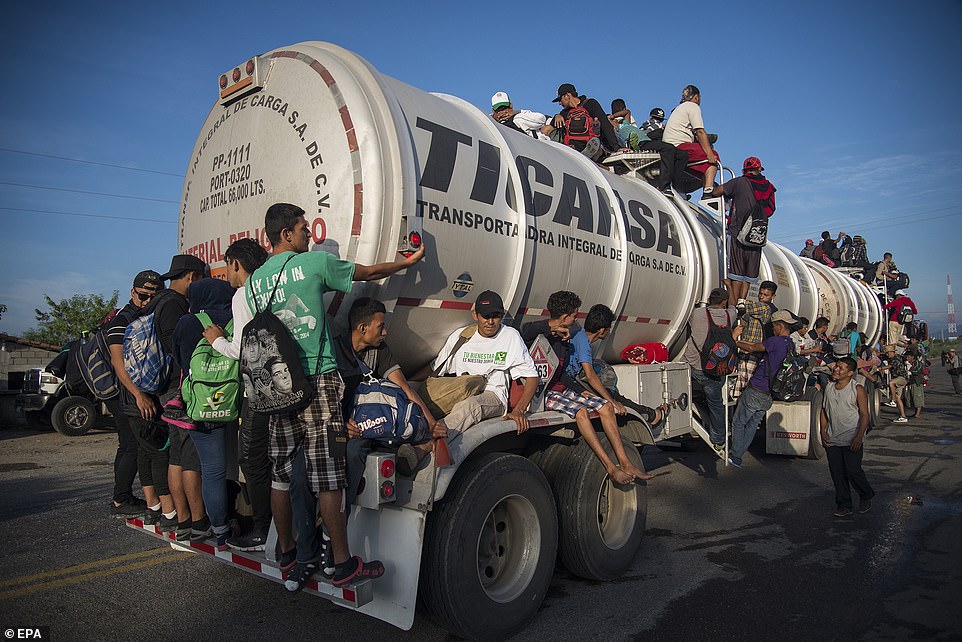 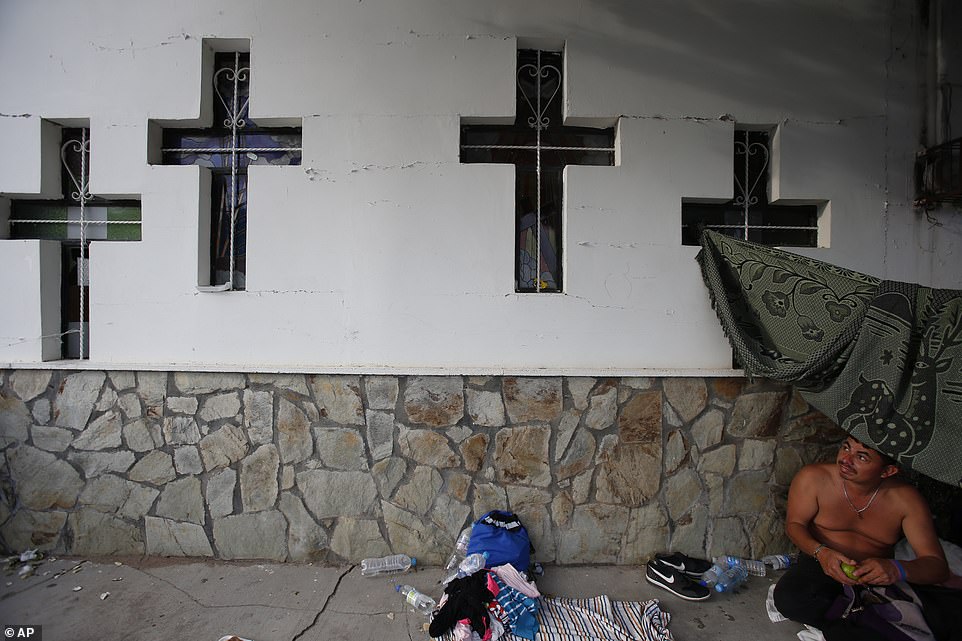 A migrant peels an orange in his makeshift camp for the night, along the street wall of an earthquake-damaged church 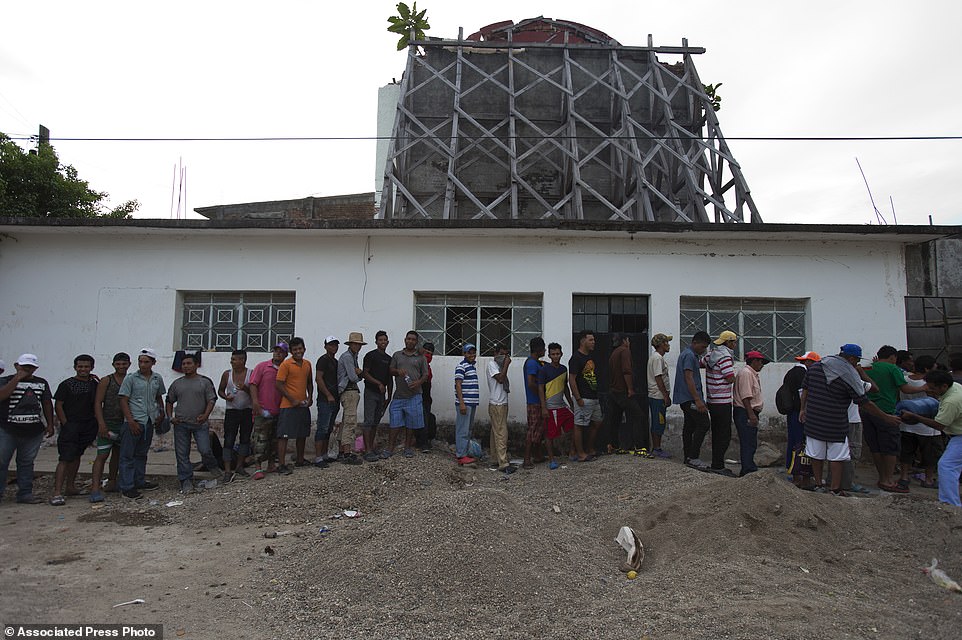 Migrants line up to receive food handouts in front of the backside of a church heavily damaged in a September 7, 2017 earthquake in Niltepec, Oaxaca state 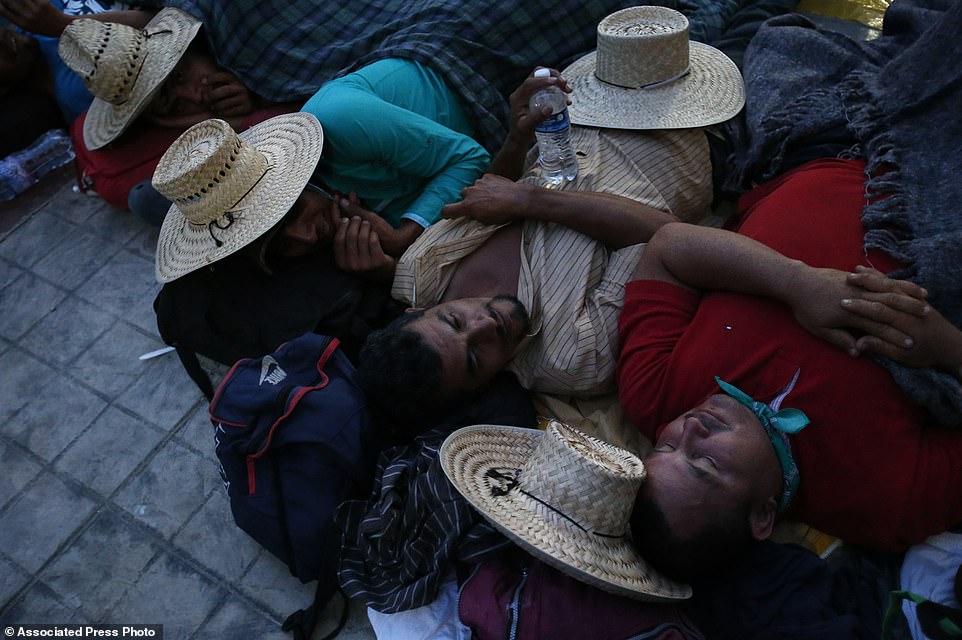 Migrants sleep packed together in a church courtyard at nightfall, as a thousands-strong caravan of Central Americans hoping to reach the US border stops for the night in Niltepec, Oaxaca state, Mexico 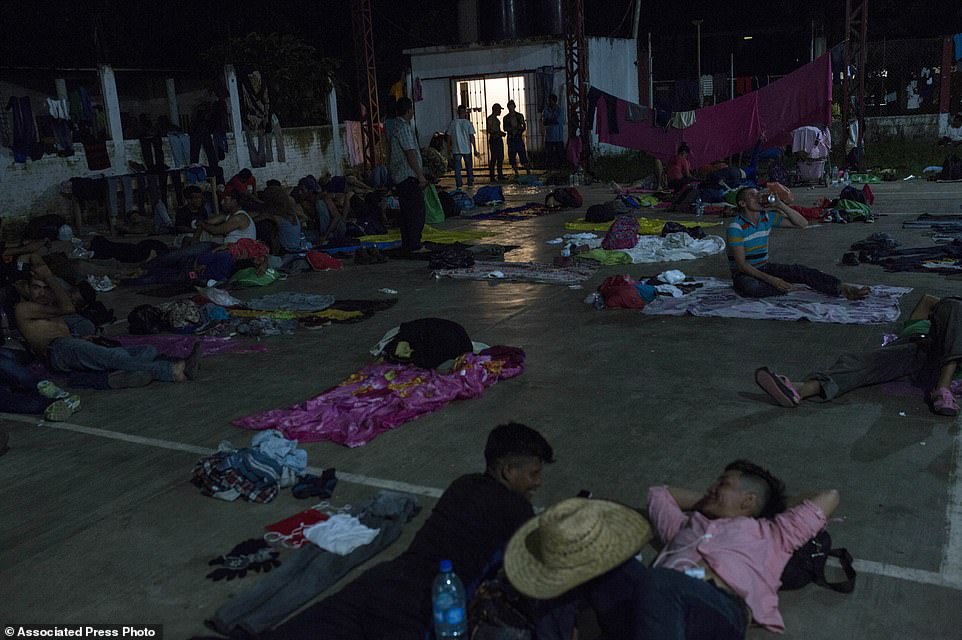 Migrants from a second caravan gather at a makeshift shelter in Ciudad Hidalgo, Mexico, Monday,after entering the country from Guatemala 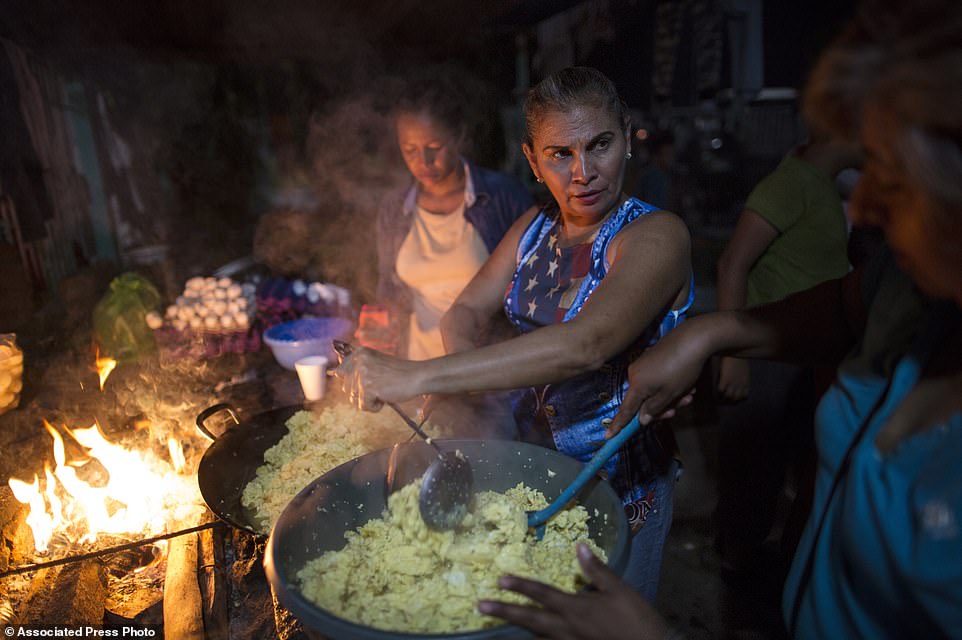 The standoff at the riverbank followed a more violent confrontation on the border bridge over the river Sunday night, when migrants threw rocks and used sticks against Mexico police. One migrant died from a head wound during the clash, but the cause was unclear.

In the Mexican border town of Ciudad Hidalgo, the caravan’s participants said they hoped to continue onward Tuesday morning.

With the original caravan not expected to reach the US border until December, the Pentagon announced it would send 5,200 active-duty troops to ‘harden’ the US-Mexico border. There are already more than 2,000 National Guard troops providing assistance at the border.

The Pentagon announcement comes as President Donald Trump has been focusing on the caravan and calling it a ‘national emergency’ to stir up his base a week before the hotly contested midterm elections.

Migrants in the first caravan planned to walk to Juchitan on Tuesday, a trek of some 32 miles to the west. They may have been emboldened Monday by the efforts of one small town to help them move. More than 100 migrants lined up at a gas station parking lot to wait for rides in Zanatepec.

‘We are helping our brothers from other countries with food, water, and transportation,’ Nolasco said. ‘It is going to be very little, compared to what they need.’

Illustrating the waning enthusiasm, some migrants gathered at a checkpoint near Tapanatepec to ask for help returning home to Honduras, the origin of the great majority of those in the caravan. 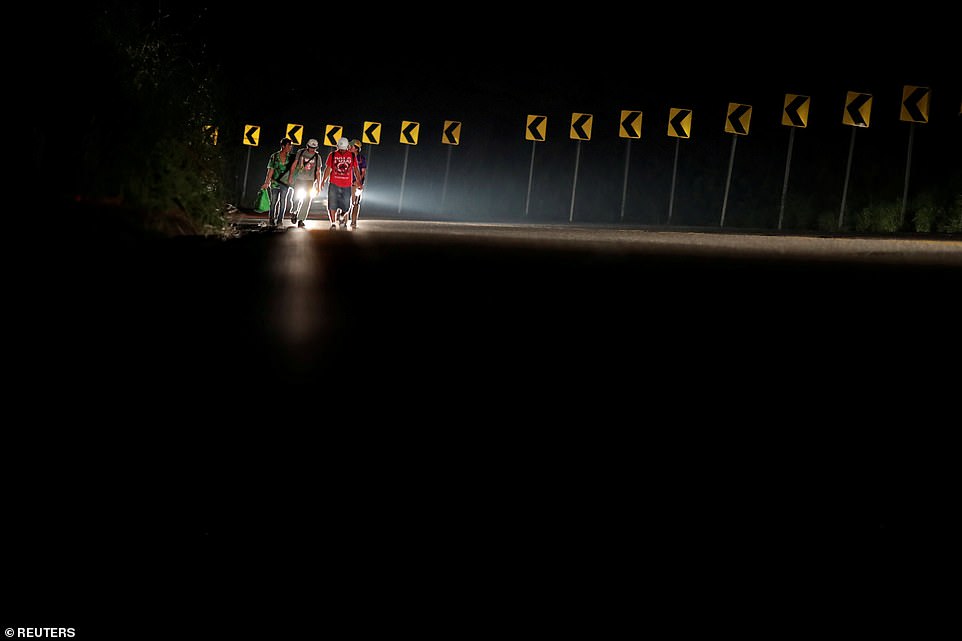 Migrants in the first caravan planned to walk to Juchitan on Tuesday, a trek of some 32 miles to the west of Niltepec 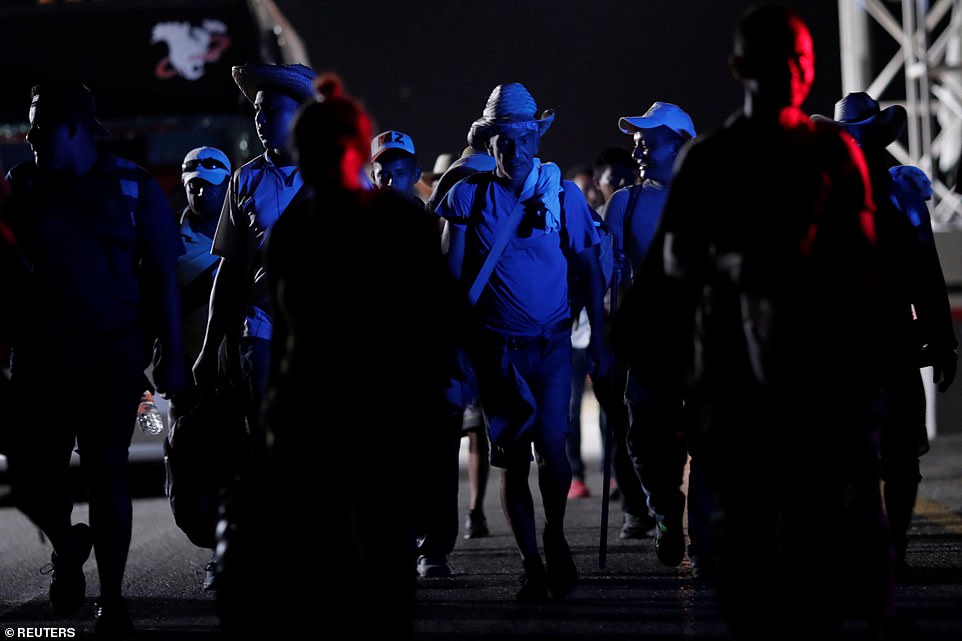 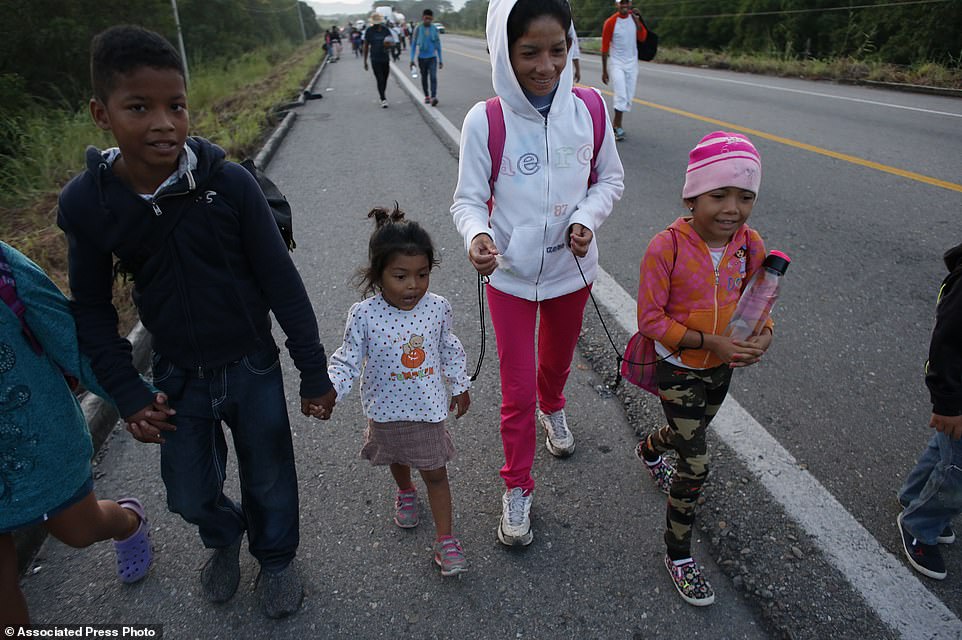 Migrant Fany Lizeth Cruz walks with cords attaching her wrists to those of her daughter, right, and another little girl, as her son walks alongside, outside Tapanatepec, Mexico, Monday 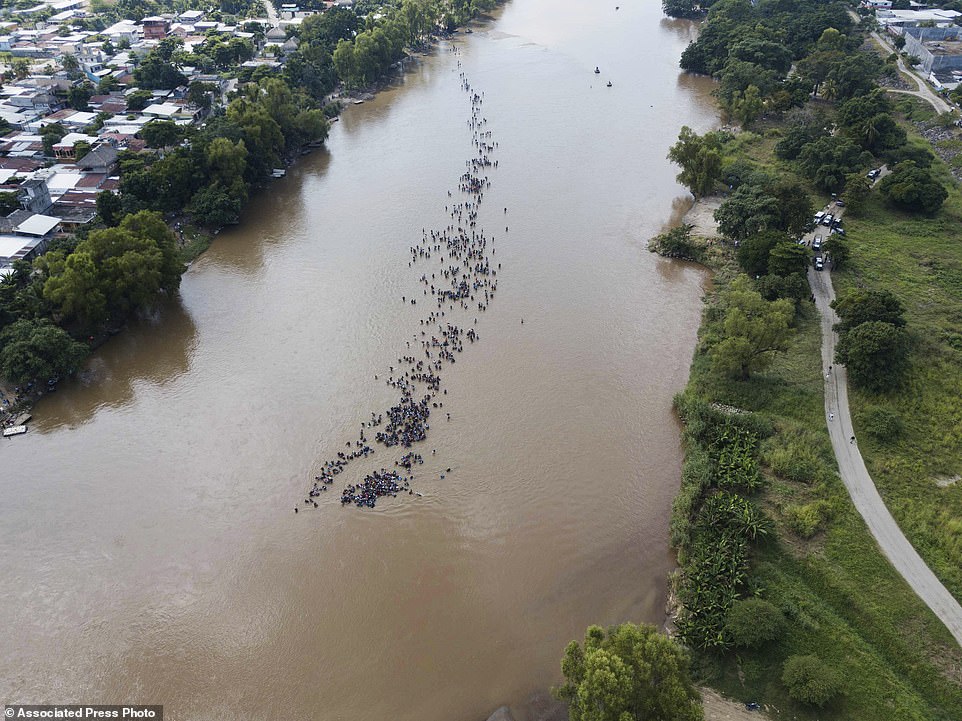 A new group of Central American migrants bound for the USborder wade in mass across the Suchiate River, that connects Guatemala and Mexico, in Tecun Uman, Guatemala, Monday 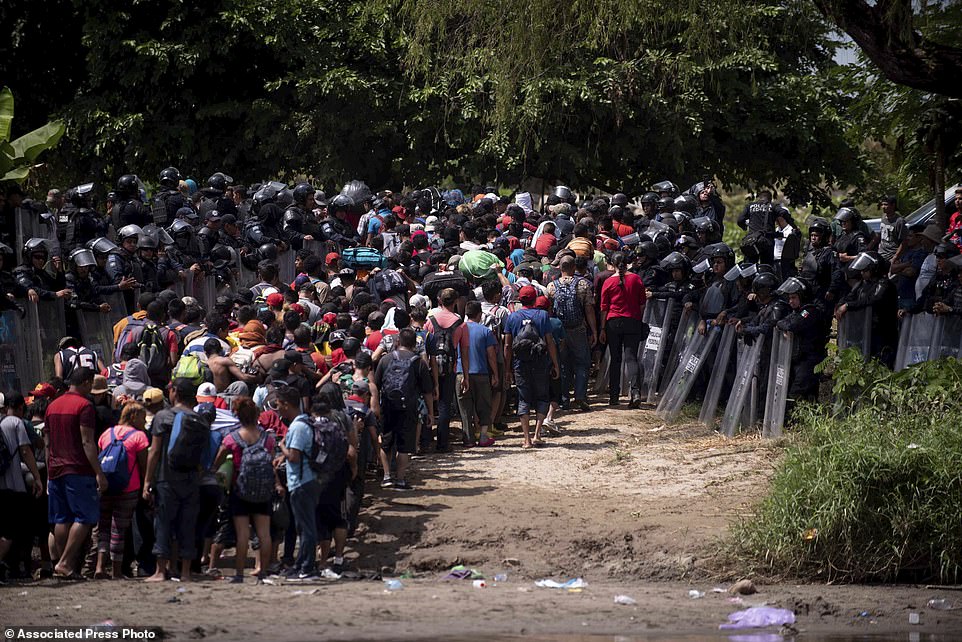 The migrants were met by Mexican Federal Police after crossing the river in Tecun Uman, Guatemala, Monday

Tired of walking and disheartened by the many miles yet to go and misbehavior by some fellow travelers, people have been dropping out and the caravan has contracted from its peak of an estimated 7,000 participants.

‘Of the friends that I have been with, all want to go back,’ said Hasiel Isamar Hernandez, a 28-year-old mother-of-three.

For her, the last straw was when she heard from her husband that her 3-year-old daughter back home had stopped eating because she missed her mother.

El Salvador’s immigration agency, meanwhile, said a group of Salvadorans including several dozen children and adolescents that crossed legally into Guatemala on Sunday numbered about 500.