The Nebraska-based First National Bank of Omaha will not renew its contract to issue the group’s NRA Visa Card, spokesman Kevin Langin said in a statement.

‘Customer feedback has caused us to review our relationship with the NRA,’ Langin said. 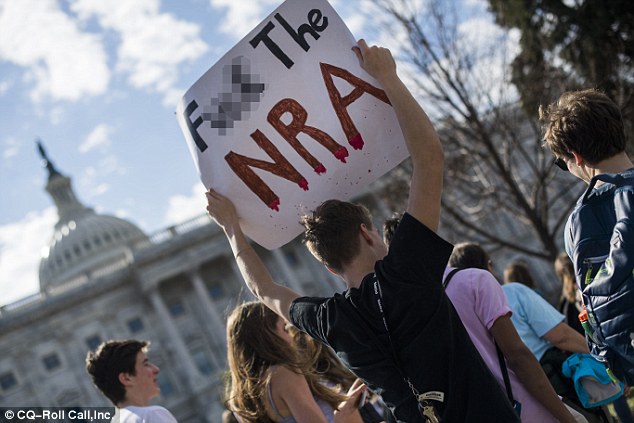 The NRA has faced intense criticism after the school shooting in Parkland, Florida that left 17 people dead. Pictured are students calling for Congress to act on gun control on February 21

Langin declined to say when the contract would expire and would not elaborate on what sort of feedback the company had received. The company released the same statement dozens of times on Twitter in response to other users who called on the company to sever its ties with the NRA. Some users who identified themselves as customers pledged to take their business elsewhere.

‘You have blood of these murdered people on your hands,’ said one Twitter user.

The announcement came after the progressive news website ThinkProgress listed the bank as a company that supports the NRA. ThinkProgress noted that First National Bank offered two NRA cards, each with a $40 bonus, and touted it as ‘enough to reimburse your one-year NRA membership!’

On Thursday, the bank’s webpage that advertised the NRA card had been disabled. A cached version of the site touted the card as ‘the official credit card of the NRA’ and noted the benefits of membership.

The NRA credit cards are part of a larger business in which the bank issues cards branded with organizations’ logos, such as the sporting-goods store Scheels and the Best Western hotel chain.

The NRA has faced intense criticism following the school shooting in Parkland, Florida that left 17 people dead, the latest in a string of high-profile mass killings in the U.S. 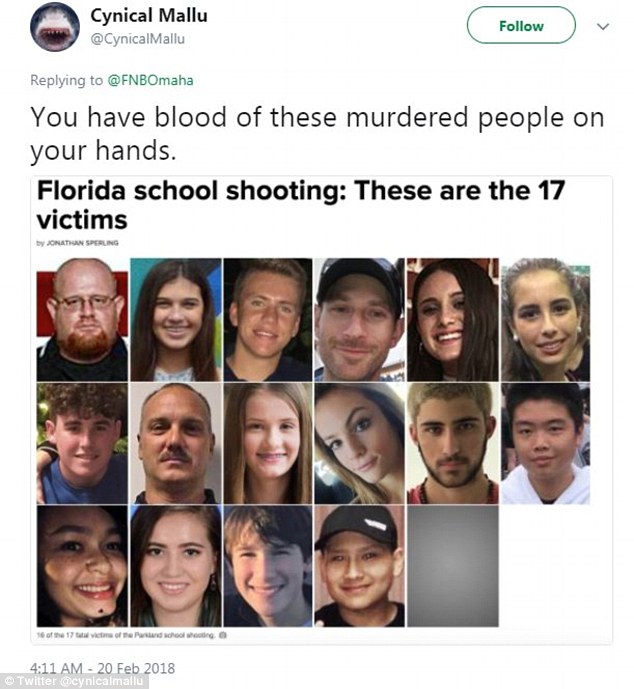 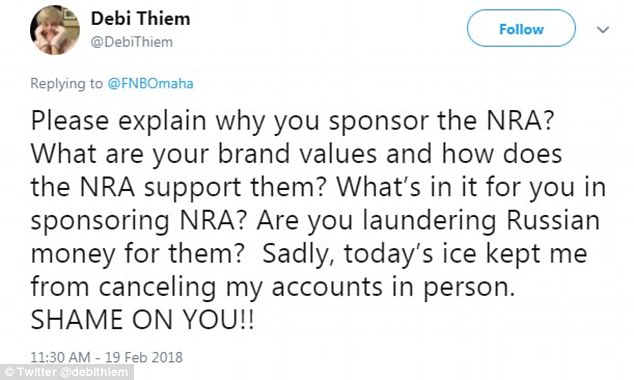 ‘Customer feedback has caused us to review our relationship with the NRA,’ said bank spokesman Kevin Langin said

A group that tracks the credit industry said the move could carry significant risks for First National Bank of Omaha.

‘Many will applaud the move, but NRA members are famously loyal and the organization has shown itself as being very good at mobilizing its members,’ said Matt Schulz, a senior industry analyst at CreditCards.com. ‘However, banks are in the business of managing risks of all kinds, and First National clearly sees this as one they’re willing to take.’

The company is not the only one facing backlash over their relationship with the country’s powerful lobbying group.

The hashtag #StopNRAmazon has emerged on social media as people threaten to stop using the retail giant if the site doesn’t stop carrying NRATV on its streaming service.