A nose drop containing ‘friendly’ bacteria that could help prevent meningitis is being tested by UK doctors in a world-first trial.

The treatment, developed at the NIHR Southampton Biomedical Research Centre, involves a gene being inserted into a harmless form of bacteria.

This helps it to remain in the nose and prompts an immune response.

It is hoped this enhanced bacteria, known as Neisseria lactamica (Nlac), will protect against its close cousin, Neisseria meningitidis (N.meningitidis) – the strain responsible for meningitis.

Treatment test: Developed at the NIHR Southampton Biomedical Research Centre, drops involve a gene being inserted into a harmless form of bacteria then deposited in the nose

Around 10 per cent of adults carry the bacteria responsible for meningitis in the back of their noses and throats without any signs or symptoms.

However, in some, it can invade the bloodstream and cause life-threatening bacterial infections including meningitis and blood poisoning, which is known as septicaemia.

Meningitis occurs in people of all age groups but affects mainly babies, young children and the elderly.

Meningococcal meningitis, which is a bacterial form of the disease and is responsible for 1,500 cases a year in the UK, can cause death in as little as four hours from the onset of symptoms.

Professor Robert Read, director of the NIHR Southampton Biomedical Research Centre, said: ‘We have already shown that placing Nlac in the nose of healthy adults caused no harm to the volunteers. The bacteria settled and it caused an immune response which prevented the acquisition of harmful bacteria in a number of patients.

‘By enhancing Nlac with a gene which we know helps bacteria stick to human body cells in larger numbers, we can increase the number of people who carry this friendly bacteria in their nose and thus block out N.meningitidis which can cause invasive meningococcal disease.’ 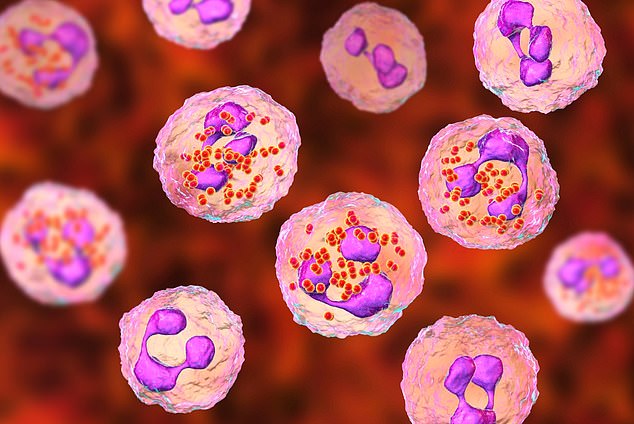 Deadly: Meningococcal meningitis (pictured stock) is responsible for 1,500 cases a year in the UK, can cause death in as little as four hours from the onset of symptoms

In a previous study, Professor Read’s team found inoculating adults with an unmodified Nlac resulted in it settling harmlessly in the nose of a third of recipients and prevented them carrying N.meningitidis at the same time.

They hope genetically enhancing the bacteria with a ‘sticky’ surface protein from N.meningitidis will increase its ability to reside in the nose and generate a strong immune response that protects against the bacteria.

Professor Read, who worked on the project with Dr Jay Laver, senior research fellow at the University of Southampton, added: ‘If successful, this would offer the potential to prevent the spread of infection or the ability to rapidly control an outbreak as meningococcal meningitis cannot develop in the absence of N.meningitidis.

‘It would also mean we would then have a future therapy that we can adapt to combat other diseases caused by bacteria that breed in the nasal pathway such as pneumonia and ear disease.’