The first fatality of the Pittsburgh synagogue massacre that claimed 11 lives on Saturday has been named as thousands gathered for a community vigil in the devastated Squirrel Hill neighborhood.

Family members told WPXI-TV that they presume Daniel Stein is among the dead.

Since news of the shooting, his family has been unable to reach him. 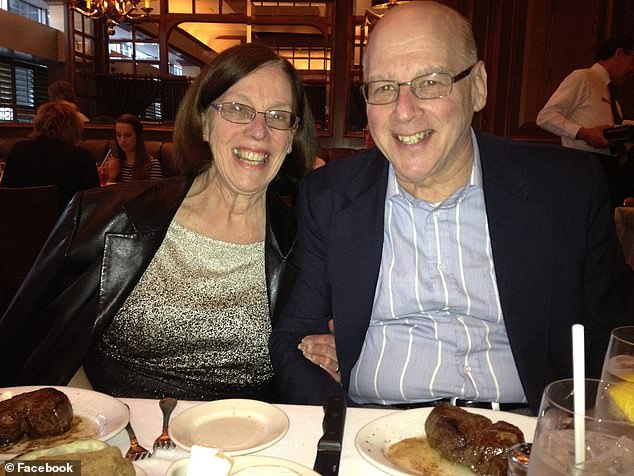 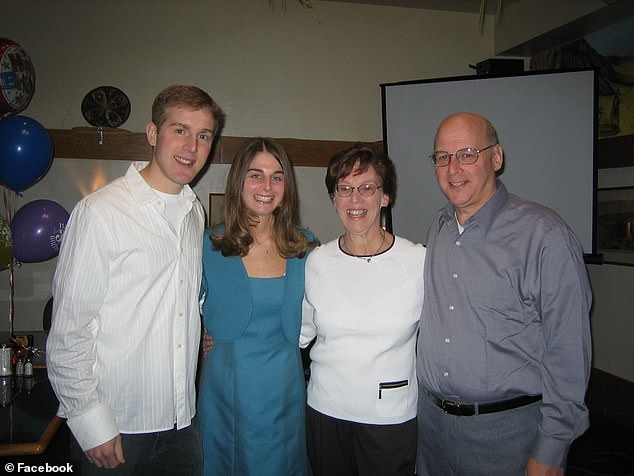 Since news of the shooting, his family has been unable to reach him 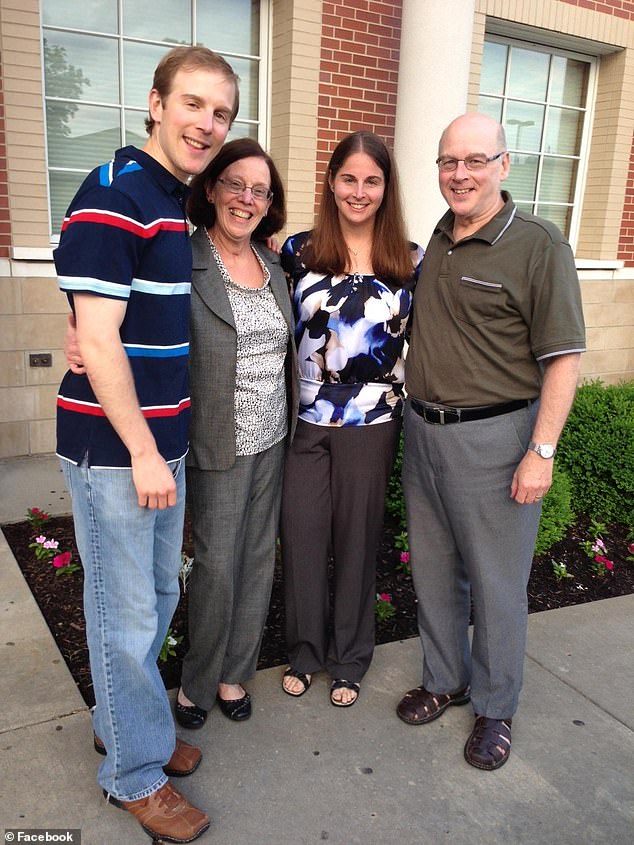 Stein has been described by friends as a family man and a new grandfather, KDKA-TV reported.

In addition to the 11 killed, at least six others were wounded.

The University of Pittsburgh Medical Center said three of the victims – a 61-year-old woman, a 55-year-old man, and a 27-year-old male officer – were in stable condition.

Two others – a 70-year-old man and a 40-year-old male SWAT team officer – were in critical condition.

Another officer suffered minor injuries, was treated, and then released from the hospital.

One of the victims in critical condition has been identified as Daniel Leger, 70. 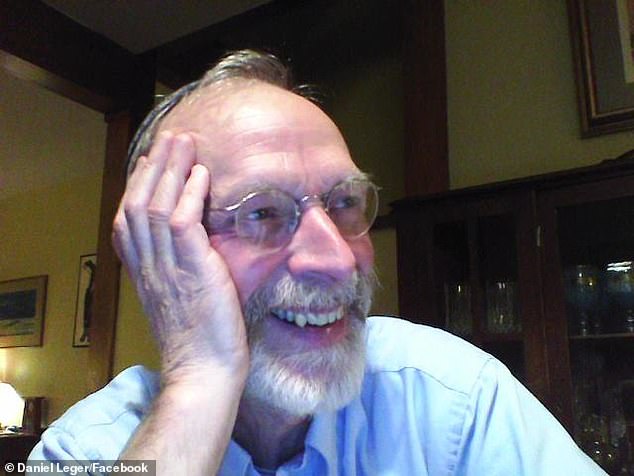 One of the victims in critical condition has been identified as Daniel Leger, 70 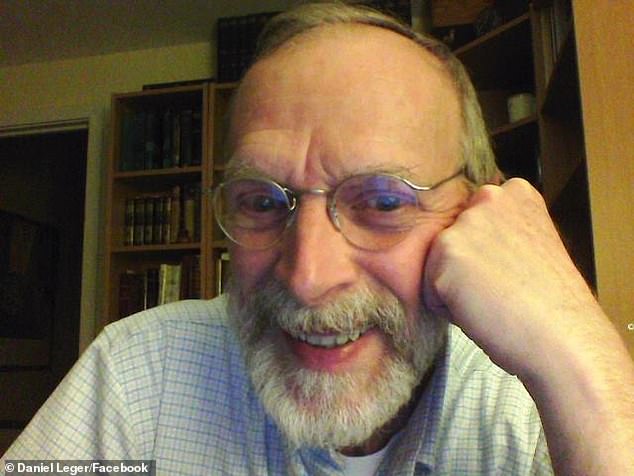 Leger is a member of the Dor Hadash congregation, which is one of three Jewish groups that share space at the synagogue 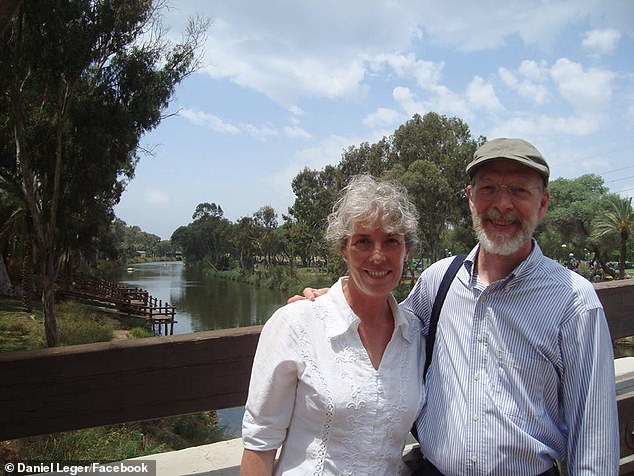 His brother, Paul Leger, said that Daniel suffered critical injuries in the chest. ‘The doctors are cautiously optimistic,’ said Paul Leger, who is board chairman of the Pittsburgh Water and Sewer Authority

Leger is a member of the Dor Hadash congregation, which is one of three Jewish groups that share space at the synagogue, according to TribLive.

His brother, Paul Leger, said that Daniel suffered critical injuries in the chest.

‘The doctors are cautiously optimistic,’ said Paul Leger, who is board chairman of the Pittsburgh Water and Sewer Authority.

Daniel Leger is a retired nurse and chaplain. He has been described as an active member of the Dor Hadash congregation.

‘I don’t think it really quite struck home,’ he said.

The other 10 fatalities have yet to be identified.

Pittsburgh Mayor Bill Peduto told CNN on Saturday that the names of the deceased will be released at 9am local time on Sunday.

This will be done at the request of the FBI, according to Peduto.

There was ‘really strong insistence by the FBI that we identify everybody with 100% accuracy before giving out any information, for the families’ sake,’ Peduto said.

The mayor added that security has also been tightened around Muslim places of worship as well as other sites that ‘would feel insecure or would need additional security.’ 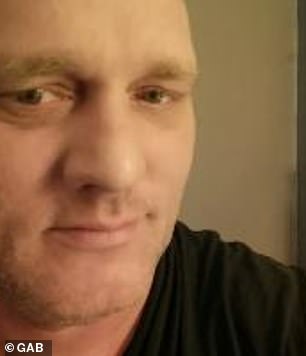 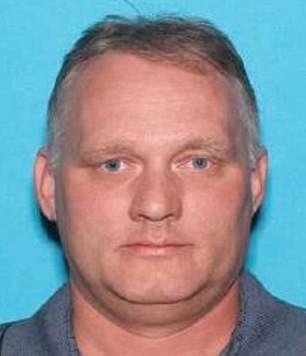 Robert Bowers, 46, has been identified as the suspected gunman who opened fire on a synagogue in Pittsburgh on Saturday. He is pictured, left, in his Gab profile picture and right in his driver’s license picture

An hour before the first reports emerged of the shooting, Bowers posted this on the social media website Gab. He was enraged by HIAS, the Hebrew Immigration Aid Society which helps Jewish migrants settle in the US, and said he couldn’t ‘sit by’ and watch ‘my people get slaughtered’ 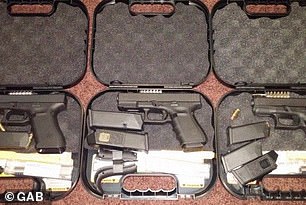 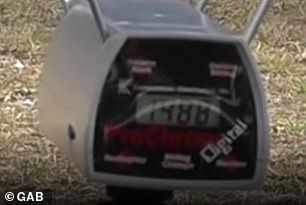 Bowers also shared photographs of his Glock collection on the website. He used several handguns and an AR-15 in the attack. Right, his cover photo included the white supremacist number 1488

The suspected gunman who opened fire on the Pittsburgh synagogue on Saturday morning has been named as 46-year-old Robert Bowers, a Trump-hating anti-Semite who regularly complained on social media about the president and ‘the infestation of Jews.’

Bowers allegedly opened fire at the Tree of Life Congregation Synagogue in the Squirrel Hill area of Pittsburgh shortly before 10am.

After opening fire on the congregation with three handguns and an AR-15, he was confronted by two Pittsburgh police officers who had been called to the scene as he tried to leave the building. Police say Bowers returned fire, injuring both of the cops, then retreated inside and ran to the third floor to hide. 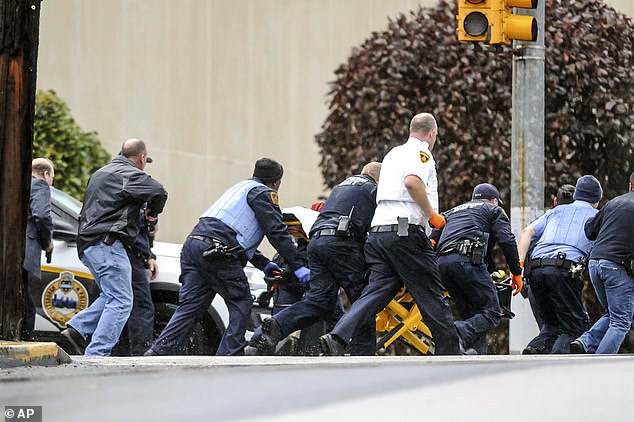 Paramedics race to get a victim from Saturday’s shooting to the hospital outside the Tree of Life synagogue in Squirrel Hill, Pittsburgh 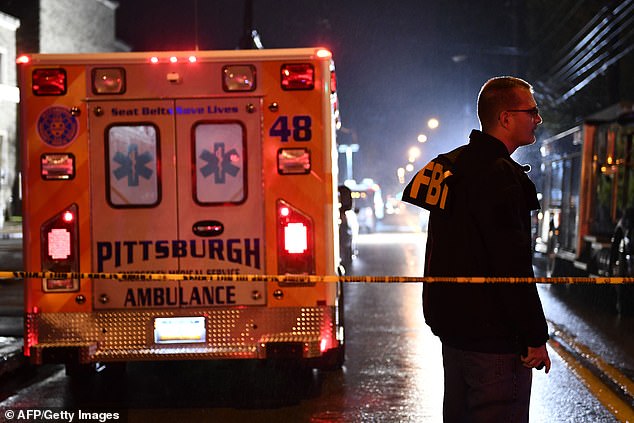 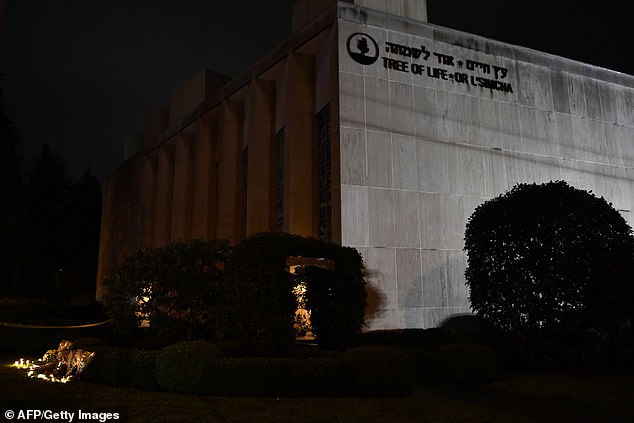 ‘The actions of Robert Bowers represent the worst of humanity. We are dedicating the entire resources of my office to this federal hate crime investigation and prosecution,’ U.S. attorney for western Pennsylvania Scott Brady told reporters.

FBI special agent Bob Jones said the Federal Bureau of Investigation, which is leading the probe, said the crime scene was the worst he had seen in 22 years with the FBI. He said he believed Bowers was acting alone, adding: ‘We have no knowledge that he was known to law enforcement before today.’

KDKA television cited police sources as saying Bowers walked into the building and yelled ‘All Jews must die.’

Bowers had made many anti-Semitic posts online, including one early on Saturday. In another, he slammed President Donald Trump for doing nothing to stop an ‘infestation’ of the United States by Jews.

More than 3,000 people from different faiths gathered at a major intersection to honor the victims of the mass shooting.

Those in attendance sang Hebrew and English hymns and lit candles while many in the crowd embraced one another.

The vigil, a ‘prayer for healing,’ was organized by students from the nearby Allderdice High School, according to the Pittsburgh Post-Gazette. 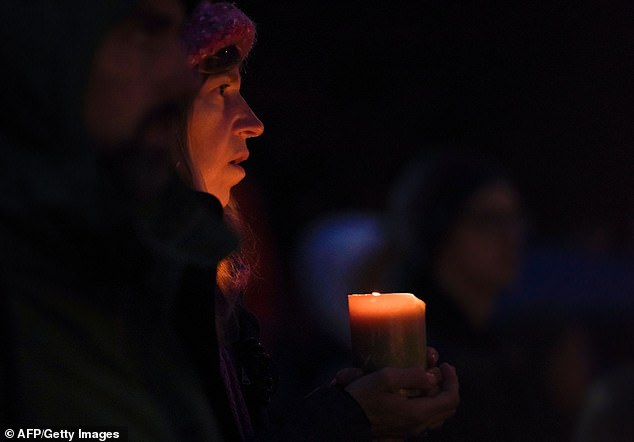 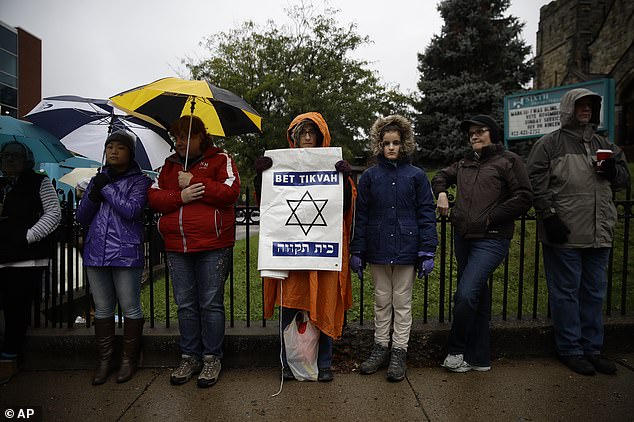 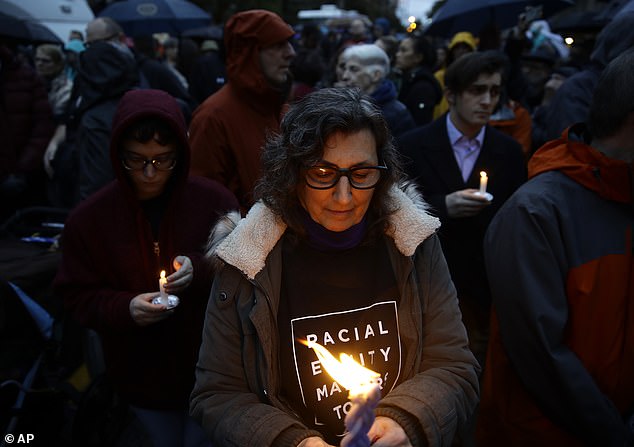 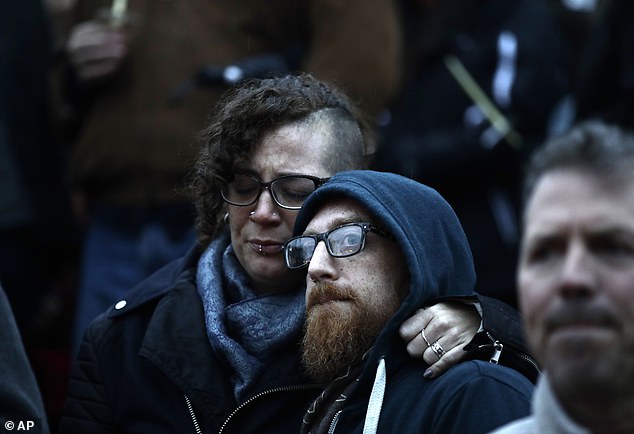 More than 3,000 people from the Pittsburgh community gathered for the candlelight vigil on Saturday night 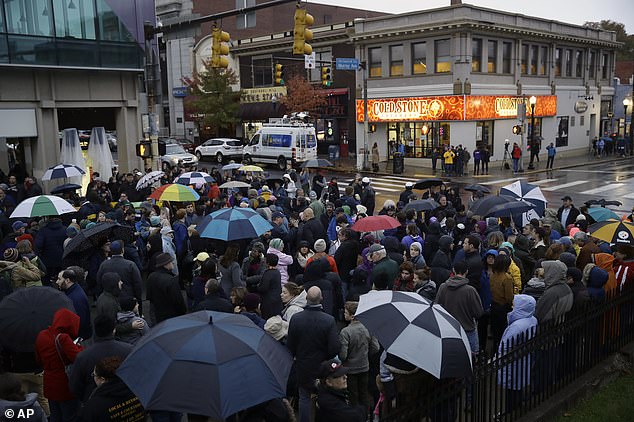 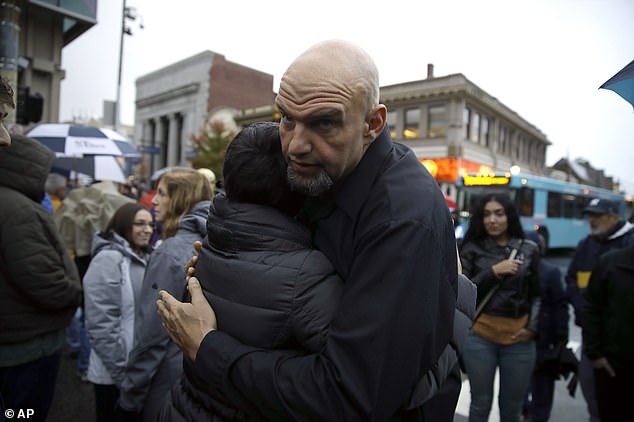 Braddock, Pennsylvania Mayor John Fetterman hugs a person as they gather for the vigil on Saturday 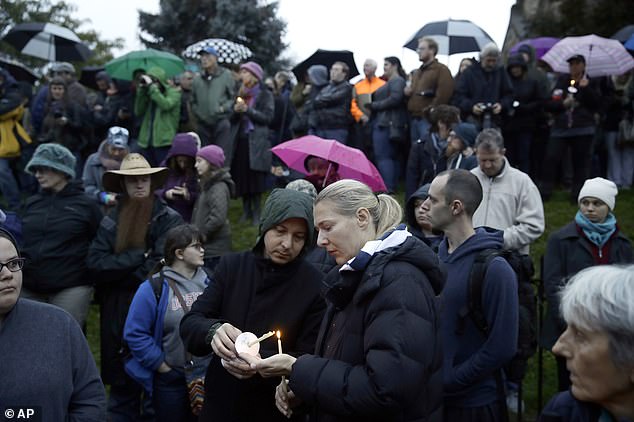 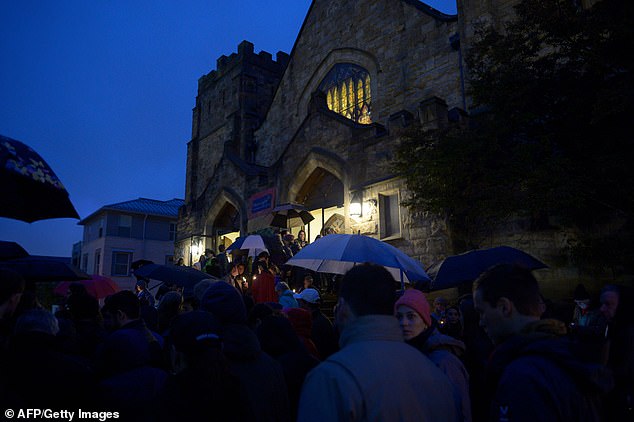 The vigil was organized by students from nearby Allderdice High School, a public high school in Squirrel Hill 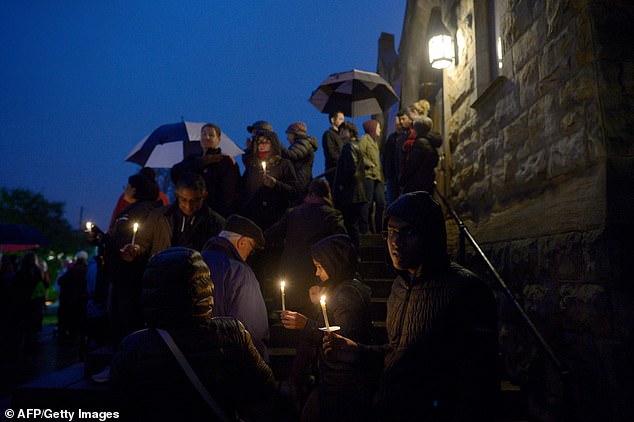 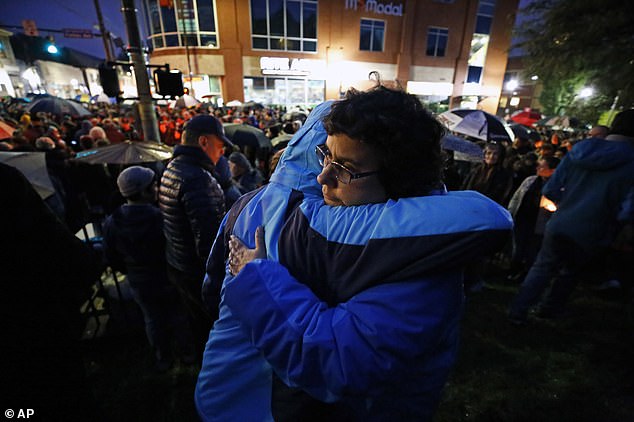 Amy Gilligan hugs her daughter at the intersection of Murray Ave. and Forbes Ave in Pittsburgh on Saturday 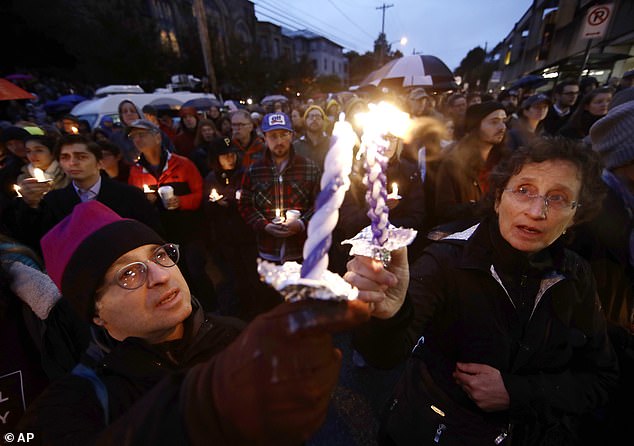 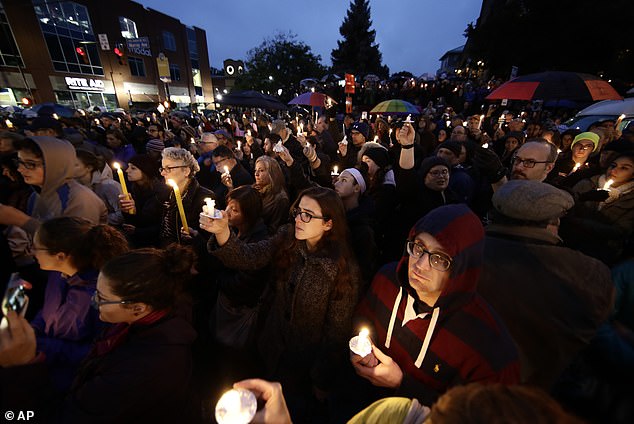 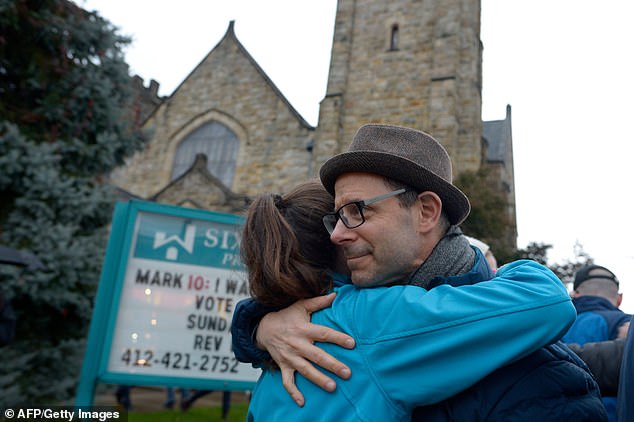 Matthew Chinman, 49, of Squirrel Hill, hugs a fellow community member during the vigil on Saturday night 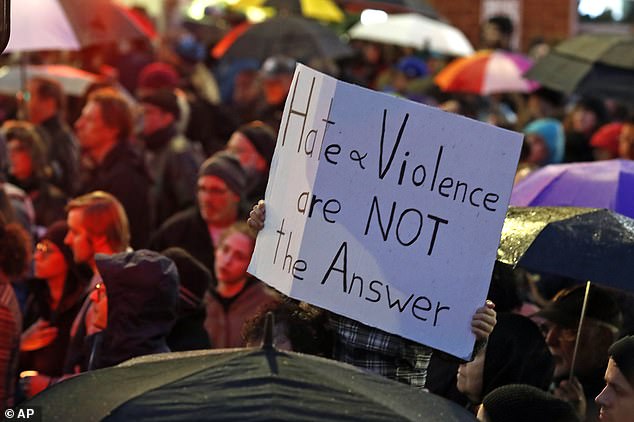 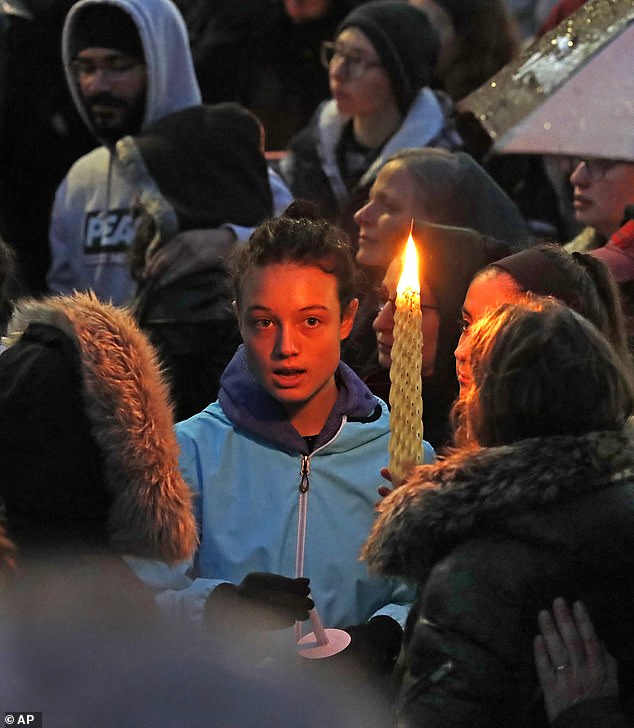 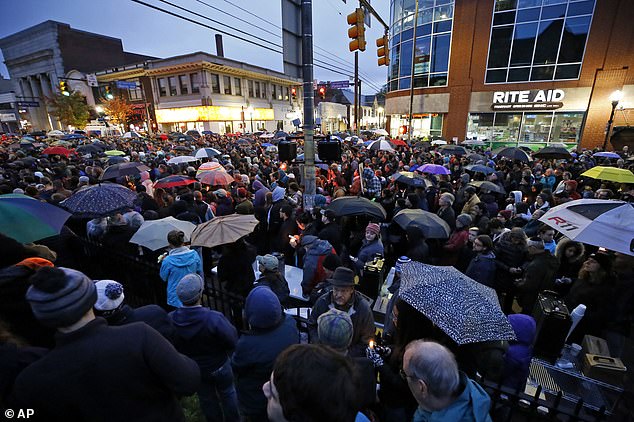 President Trump said he plans to visit Pittsburgh in the near future. A crowd is seen gathering at an intersection for the vigil on Saturday night

The vigil began at Sixth Presbyterian Church, which was filled to capacity.

The church, which is known for once being the house of worship frequented by the late Fred ‘Mister’ Rogers, is located across the street from the Jewish Community Center.

Leaders of the Jewish, Presbyterian, and Muslim communities came out to show their support.

Wasi Mohamed, the executive director of the Islamic Center of Pittsburgh, said his community had raised $15,000 to help the Jewish community in the city recover from the tragedy.

‘Obviously we’re all heartbroken, but how many of you are angry?’ Mohamed said as those around him raised their hands.

‘And how could we not be? People were stolen from us.’

Mohamed cited a verse from the Koran which calls for responding to an evil deed by doing a better deed.

Reverend Vincent Kolb of the Sixth Presbyterian Church led a recitation of the 23rd Psalm which starts ‘The Lord is my shepherd.’

‘We long for a day when the leaves of the tree of life will be for the healing of all the peoples,’ Kolb said.

After the indoor portion of the vigil, the crowd left the church and joined hundreds who had been waiting outside as the sun set.

Students and others sang a prayer marking the end of the Jewish Sabbath.

The most overtly political moment came when some in the crowd blamed Trump and his supporters for his rhetoric against immigrants and refugees.