A 40-year-old architect has been named as one of the 10 people killed in a suspected arson attack in Paris.

Radia Benaziez died on Tuesday morning in the blaze in an eight-storey building, allegedly started by a woman in a row over loud music.

Ms Benaziez, described as ‘adorable’ and ‘kind’ by her friends, owned a project management company and had lost her father just a year ago.

She was not involved in the alleged argument but could not escape the burning building in the city’s 16th arrondissement.

Victim: Architect Radia Benaziez (pictured), 40, has been named as one of the 10 people who died in the suspected arson attack in Paris

The suspected attacker, also aged 40, is said to have ignited paper and wood in the hallway of the residential block, killing 10 including a baby and injuring 30.

The alleged culprit was said to be drunk at the time, had suffered from psychological problems and had been in criminal courts before for anti-social behaviour.

A friend of Ms Benaziez shared a picture of her on Twitter, writing: ‘Terrible news.

‘Radia, the daughter of my friend Slimane Benaziez, has just joined her father who left us a little more than a year ago.’

Ms Benaziez, who was from an Algerian background, was described as ‘a victim of human stupidity’.

Another friend, identified by the Parisien newspaper as a work colleague called Julie, said: ‘She was adorable. Her kindness was matched only by her beauty.’

A 22-year-old fireman identified as Quentin L. lived on the second floor of the building in Rue Erlanger, and confirmed he had been quarrelling with the alleged arsonist. 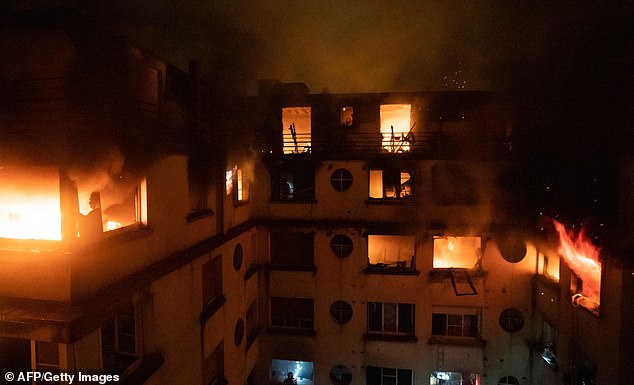 Deadly blaze: The fire rages in the eight-storey residential block in the 16th arrondissement of Paris, in a suspected arson attack which killed 10 people including Radia Benaziez 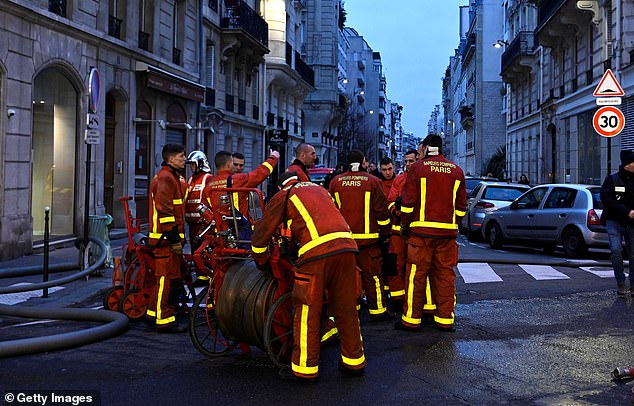 Recovery: Firefighters work on Erlanger Street in Paris yesterday after the deadly fire which killed 10 people and injured 30 others

‘We were disturbed by my neighbour who had put the music on very loud at home,’ he said.

‘On Monday night my girlfriend went to knock on her door, and the neighbour was insulted by that.’

Police later arrested the woman as she tried to set fire to a car and a wheelie bin in the street outside.

‘Her T-shirt was smouldering, but she was in the process of starting more fires,’ said a source connected to the local BAC anti-criminal brigade, which made the arrest.

Following her arrest, the woman who was drunk at the time of arrest, was taken to a nearby hospital suffering with physical injuries caused by the fire.

‘[The woman] has psychological problems, and had been drinking heavily at the time of the fire,’ said a source close to the enquiry.

‘She was being treated at a local psychiatric unit, but was still living in the block where she is thought to have started to fire. 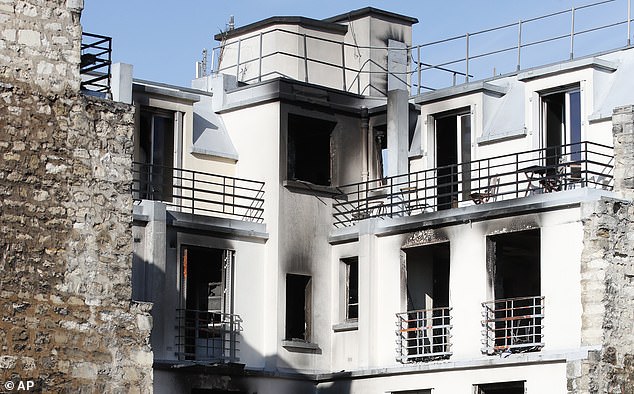 Destruction: View of the apartment building  on Tuesday, hours after the fire that killed ten people was extinguished 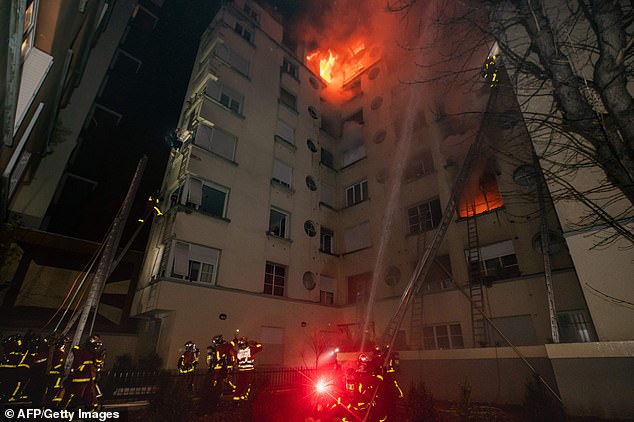 Emergency: Firemen are seen working to put out the blaze on Erlanger Street in the 16th arrondissement in Paris 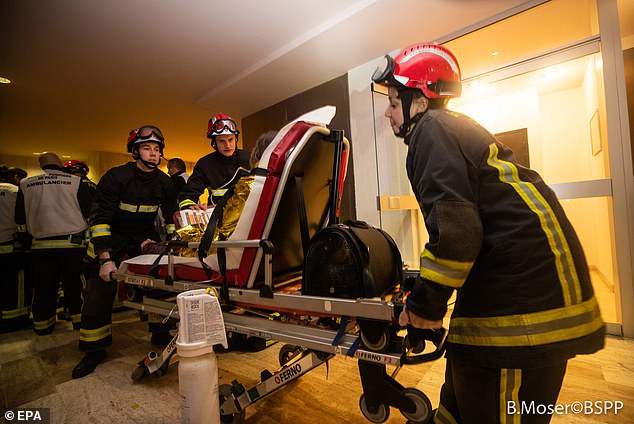 ‘She was involved in regular arguments with other neighbours, who often complained about her behaviour.’

By this time the building was engulfed by the fire which the emergency services took five hours to put out.

Many victims jumped from windows, while others escaped on to the roof. Beyond the 10 deaths, 30 others were injured.

Remy Heinz, the Paris prosecutor, confirmed that the arrested woman faced a charge of ‘voluntary destruction by fire resulting in death’ and was in custody in a secure psychiatric unit.

More than 200 firefighters worked through the night to extinguish the fire, which started in the early hours of Tuesday, and were able to rescue 50 people from the flames.

The building is located on an inner courtyard, meaning firetrucks were unable to drive up to the building, and firefighters were forced to carry ladders to be able to reach stranded residents. 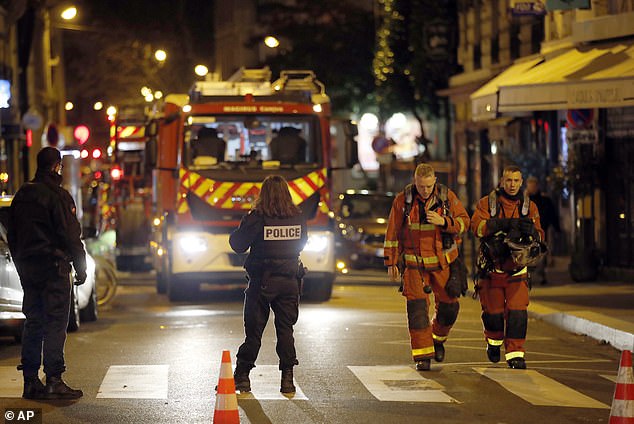 Crime scene: Firefighters and policemen stand on the scene of the fire in Paris, in the early hours of Tuesday 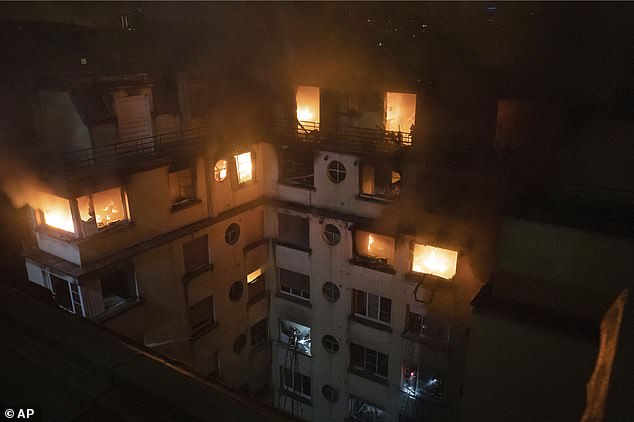 Devastation: The fire raged through the top floors of the building until well into Tuesday morning before it could be put out

The building that was set on fire is close to the Parc de Princes football stadium, where French football champions Paris St Germain play.

Some of the worst injured were seen jumping out of windows from the eight storey block, after the alarm was raised.

Fire service spokesman Clement Cognon said it created a ‘scene of incredible violence’, and that many residents of the 1970s building had tried to escape through the roof.

This was because the hallway was ablaze within minutes and covered in thick black smoke. The couple escaped, with Quentin helping other neighbours to get away.

French Interior Minister Christophe Castaner said: ‘My thoughts are with the families and loved ones of the victims on this tragic fire that has bereaved the capital.’

Mr Castaner added on Twitter: ‘Tribute to Paris fire service who fought the flames all night. Everything is being done to identify the causes of the tragedy.’