Adham Amin Hassoun, 58, has left the country after a judge last month ordered his release

The first person detained indefinitely under the Patriot Act over terrorism-related charges has been freed and has left the US for an unknown country.

Adham Amin Hassoun, 58, has left the country after a judge last month ordered his release because the government failed to prove he is a threat to national security, his lawyers confirmed.

Donald Trump made history last year when he became the first US president ever to invoke the Patriot Act in order to hold someone behind bars for an indefinite length of time.

Hassoun was holed up in a federal immigration detention center in Batavia, despite completing his criminal sentence back in 2017, after serving 15 years for cutting checks to extremist-linked Muslim charities outlawed by Congress after the 9/11 attacks.

Authorities have been unable to agree on the danger the Palestinian national poses to America, with the FBI and the Department of Homeland Security claiming he is likely to engage in terrorist activities while a federal judge ruled their claims are based on prison informants and a lack of evidence.

Nicole Hallett, one of Hassoun’s lawyers, confirmed the US’ first post-conviction terrorism detainee has walked free and gone to another country, reported the Daily Beast.

The Trump administration finally deported the stateless man after they backtracked on an appeal to release him into the custody of his sister in Florida.

Hallett said the government had abused its power in holding Hassoun behind bars for an indefinite length of time.

‘If the government has this authority, it will abuse it and that has been proven in this case,’ Hallett told the Beast.

‘This isn’t going to determine the constitutionality of PATRIOT Section 412, but what it does do is show precisely why the government can’t have the authority to detain someone indefinitely without launching criminal charges.’ 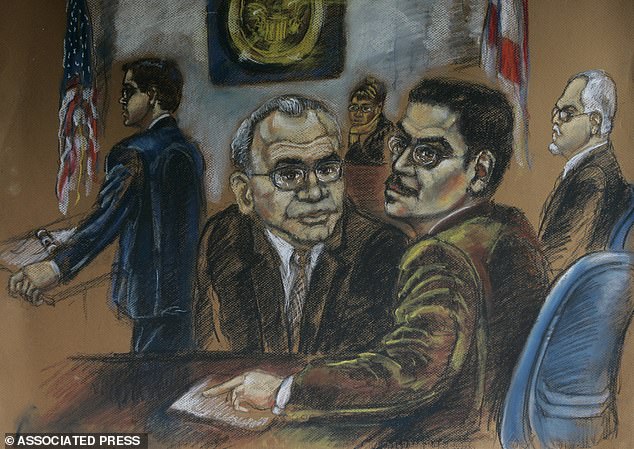 A courtroom sketch of Adham Amin Hassoun (second left) with Jose Padilla (second right) at the 2007 Miami trial. Hassoun was the first person detained indefinitely under the Patriot Act over terrorism-related charges and he has now been freed and gone to an unknown country

The government’s case for holding Hassoun behind bars indefinitely collapsed last month, after US District Judge Elizabeth Wolford ruled it was based on weak evidence and informants’ lies.

In a 43-page ruling, Woolford wrote that Hassoun’s imprisonment was not ‘lawfully authorized by statute or regulation’ and ordered he be released days later.

She ruled that the FBI and DHS had failed to back up claims the 58-year-old is dangerous and likely to engage in terrorist activities if released.

The evidence was found to be at best flimsy and based on the accounts of a prison snitch who had been exposed as unreliable.

Wolford said the government’s detention of Hassoun was ‘based on the executive branch’s say-so’ and had ‘no judicial oversight of the factual findings’ that he poses a threat.

Hassoun, who moved to the US in 1989 and was living in Florida at the time, was first arrested on an immigration violation in June 2002.

He then stood trial and was found guilty of cutting checks to extremist-linked Muslim charities and was sentenced to 15 years in federal prison.

All but one of the checks were written before the September 11 attacks ravaged America and killed 2,977 people. 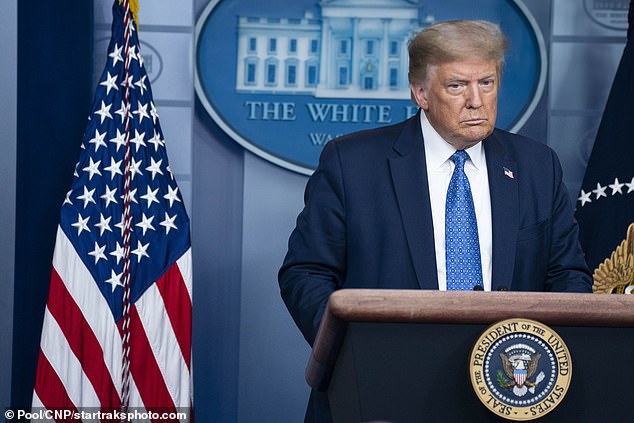 Though he was tried alongside once-suspected ‘dirty bomber’ Jose Padilla, Hassoun’s crimes were not for acts or plots of violence.

Hassoun was due to be released in 2017 and ICE officials warned to deport him.

But his statelessness as a Palestinian prevented this as neither his birth-country of Lebanon nor Israel were willing to supply him refuge.

He won a legal battle that ruled in favor of his release as the likelihood of his deportation was limited.

However, the Trump administration declared him a threat to national security and used an obscure immigration regulation to bypass a Supreme Court ruling allowing for no more than six months detention.

The move was said to be aided by sealed testimony outlining Hassoun’s alleged misdeeds behind bars by other inmates.

Trump then invoked, for the first time in US history, section 412 of the Patriot Act.

The clause allows the government to detain non-citizens imprisoned on American soil who cannot be deported and are deemed on ‘reasonable grounds’ to be engaged in ‘activity that endangers the national security of the United States.’

The government claimed he had taken on a ‘leadership role’ in a criminal conspiracy to recruit fighters and provide materials in support of terrorist organisations.

His case has long divided opinion, with Judge Marcia G. Cooke saying in 2008 the government was unable to find any ‘identifiable victims’ as a result of his actions and rejecting the life sentence sought after by the Justice Department.

Hassoun claimed he was prosecuted because he refused to turn into a federal informant while in immigration custody in 2002.