A mother and her three-year-old daughter who were killed in a tragic quad bike accident outside a farm in Northern Ireland have been pictured for the first time.

Clare Smyth and her daughter Bethany died at the scene when their quad bike collided with a tractor on Whitepark Road, County Antrim at 4pm on Tuesday.

Mrs Smyth’s older daughter Hannah, five, was also on the bike and is today fighting for her life after being rushed by air ambulance to the Royal Victoria Hospital in Belfast.

She is said to be in a critical condition with her father Ryan Smyth at her bedside.

Sympathies have poured in from friends and neighbours of the well-known family after the tragedy, with many praying for Hannah’s swift recovery.

Pictured: Clare Smyth and her daughter Bethany, who died yesterday when their quad bike collided with a tractor in County Antrim 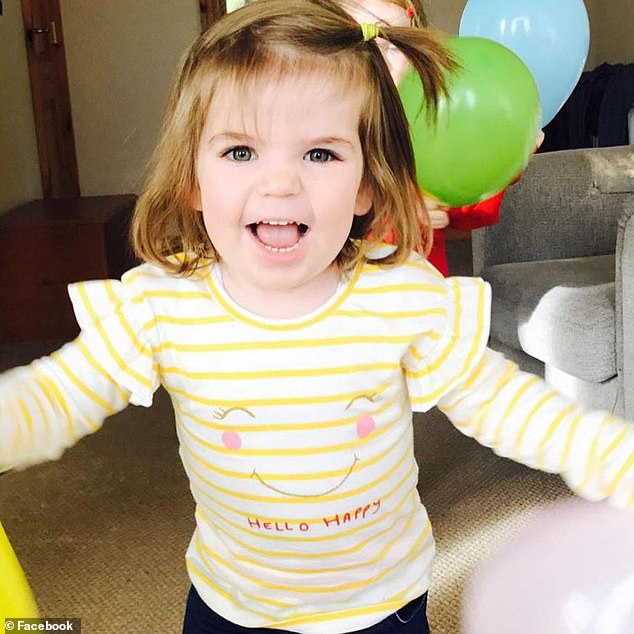 Mrs Smyth, who is in her 30s, was pronounced dead at the scene alongside her three-year-old daughter Bethany (pictured)

Mrs Smyth, who is in her 30s, was pronounced dead at the scene alongside her daughter Bethany. It is not known if the family were wearing crash helmets at the time, but quad bikes are not typically fitted with seat belts.

The mother-of-two is understood to have been driving the bike when it collided with a tractor at the entrance of their farm near Ballycastle.

Police have appealed for witnesses to the accident which has left the close-knit farming community grief stricken.

Mr Smyth and his father Gregg are well known dairy farmers in the region and are thought to have installed one of the first robotic milking systems in the area.

Shocked friends have posted messages on social media praying for Hannah’s recovery and expressing their grief at the loss.

Janet Bonner said: ‘So so sad today. Lost a lovely friend and her beautiful daughter.

‘Thoughts are with the family. Prayers for little Hannah fighting for her life tonight, her Daddy needs her back home.’

Michelle Wilmont added: Absolutely heartbreaking just can’t stop thinking about that poor family just hope and pray Hannah makes a speedy recovery to get back to her Daddy.’ 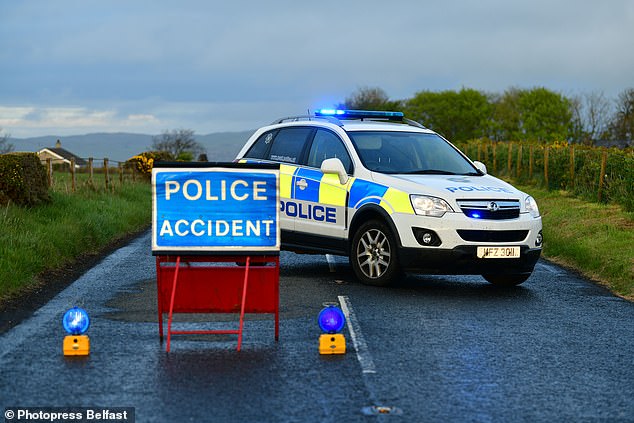 ‘The latest information on Hannah is that she is responding well to treatment in hospital which is really good news,’ she said.

‘The Smyth family is well respected in the local area and runs a very clean organic farm that sold ice cream to the passing tourists.

‘The farm has always been ahead of its time in terms of technology and operated a robotic system for milking the cows.

‘For the last six weeks during the Covid-19 lockdown the tourists have gone and we have been used to only the essential farm traffic on the roads.

‘There was somewhat of a wider calm in the area before this latest accident has catapulted the community into a state of grief and anxiety.

‘It’s a tight knit community around here and when the blue lights, sirens and helicopters descended here on Tuesday afternoon everyone in the area felt the impact.

‘Our thoughts go to the family and to the child in hospital for a speedy recovery. I also want to pay tribute to all the emergency services that attended the scene. It must have been very difficult for them. 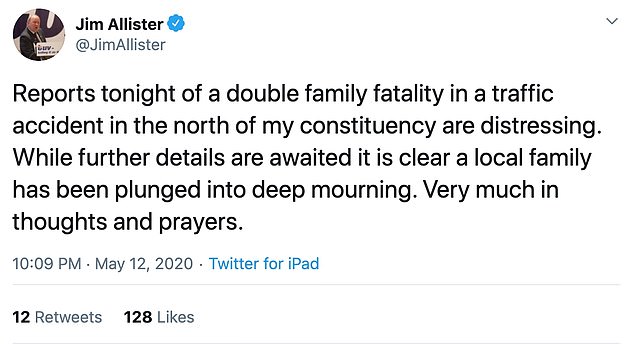 ‘Also, our thoughts are with the tractor driver as well. He is also local and would have known the family,’ she added.

‘My thoughts and prayers are with the Smyth family circle this evening who have been thrown into the depths of grief after the tragic loss of a mum and daughter in a road traffic accident.

‘My prayers are with the little sister who is in a critical condition in hospital. Please pray for comfort for the family circle and the local Bushmills/Ballycastle community.’

North Antrim MLA Jim Allister has also offered his ‘thoughts and prayers’ to the family, writing on Facebook: ‘With having a granddaughter the same age as the precious child that was lost, I can only begin to imagine the inconsolable loss they are suffering.

‘Ryan’s loss of his beloved wife and child in the one incident, and the serious injury of his other daughter, is nigh beyond comprehension.’

The Northern Ireland Ambulance Service said it received an emergency call at 16:46 on Tuesday afternoon.

The PSNI and Coastguard helicopter were also involved in the response.

‘Following assessment and initial treatment at the scene, one patient was transported to Causeway hospital initially before being transferred onwards to Belfast by coastguard helicopter,’ a spokesman said.