Landing a fighter jet on an aircraft carrier at sea is one of the biggest challenges a pilot can face.

But when Royal Navy Commander Nathan Gray landed the Lightning F-35B on HMS Queen Elizabeth for the first time, he made it look almost effortless.

For not only was his vertical landing aided by a vast array of high technology in the world’s most advanced stealth fighter jet, he had also practised it several thousand times on a simulator beforehand.

Speaking aboard the carrier off the east coast of America, where the aircraft is beginning flight trials, he said: ‘I was immensely proud. I couldn’t find the words so I punched the air several times. I had to pinch myself coming around the corner to land.’

The Daily Mail watched as US jets flown by UK test pilots took off from the £3.1billion carrier and returned to land.

The supersonic stealth jet – which can reach speeds of Mach 1.6 (1,217mph) – has the ability to evade enemy air defences with the lowest possible radar signature.

It has a lift fan behind the cockpit that gives it short take-off and vertical landing capabilities, working in tandem with rotating jet thrusters at the rear.

Cdr Gray, 41, from Stoke-on-Trent, who has test flown warplanes around the world, said of the jet: ‘The F35 is a quantum leap – it’s the world beater.

‘Anybody who wants to face off with us should be very, very nervous and should think twice.’ 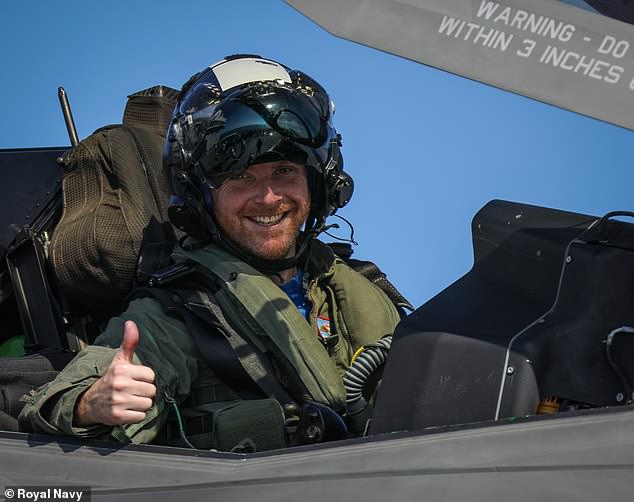 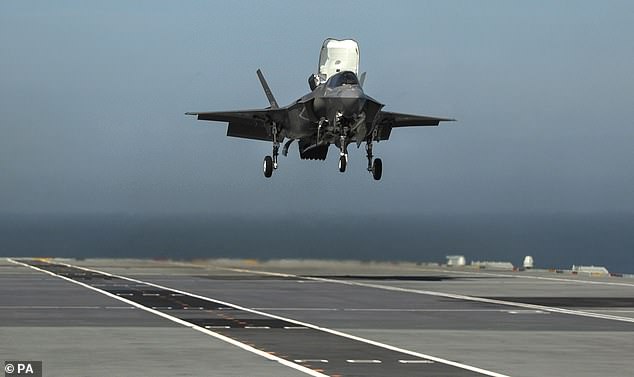 He flew the first F-35B from Pax River, a US naval station southeast of Washington DC, on Tuesday. The flight to the HMS Queen Elizabeth, which is purpose-built to work with the jet, took 20 minutes. Defence Secretary Gavin Williamson said: ‘The largest warship in British history is joining forces with the most advanced fighter jets on the planet.

‘The historic first landing on the deck of HMS Queen Elizabeth is a monumental moment in our country’s proud military history.’ More than 500 take-offs and touch-downs are set to take place during the next 11 weeks in a range of weather conditions.

HMS Queen Elizabeth will be on global operations from 2021 with both US and British F-35s.

Commanding Officer, Capt Jerry Kyd, who was also the captain of HMS Ark Royal when the last Harrier took off from a carrier, said: ‘I am quite emotional to be here in HMS Queen Elizabeth seeing the return of fixed wing aviation, having been the captain of the aircraft carrier which launched the last Harrier at sea nearly eight years ago.

‘The regeneration of big deck carriers able to operate globally, as we are proving here on this deployment, is a major step forward for the United Kingdom’s defence and our ability to match the increasing pace of our adversaries.

‘The first touch-downs of these impressive stealth jets shows how the United Kingdom will continue to be world leaders at sea for generations to come.’

‘Conducting these trials is a critical and exciting step on this journey and I applaud the many thousands of civilian and military personnel who have played a part in bringing the strategic ambition to reality.’ 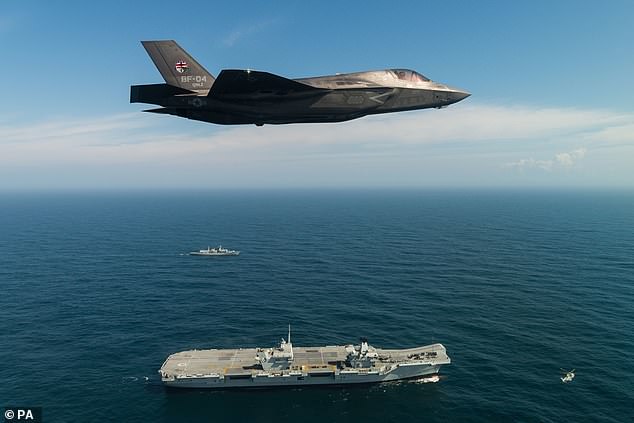 Russia threat ‘will worsen after Salisbury’

The threat from Russia is only going to get worse after the Salisbury poisoning, the captain of Britain’s biggest ever warship has warned.

Commanding Officer Capt Jerry Kyd said Moscow’s actions must be taken seriously by having credible armed forces that are ready to respond.

Speaking onboard HMS Queen Elizabeth, he said: ‘Novichok and Salisbury has yet again demonstrated that you must maintain credible, balanced and ready forces.’

He said this must be maintained ‘across all three services, not least aircraft carriers at sea, to enable us to protect the security of our people’. Senior military officers added that with the new aircraft carrier and its jets, Russia – with its ‘limping’ ships – would be no match for Britain in a naval battle. Their comments come amid rising tensions between Britain and Russia after the poisoning of former Russian spy Sergei Skripal in the UK.

It emerged this week that one of the two suspects in the Salisbury poisoning is a highly-decorated officer in Russia’s military intelligence service (GRU).

Capt Kyd warned that the threats facing the UK from Vladimir Putin must be taken seriously, as he warned against any future cuts. He said: ‘What we are seeing now is a resurgent Russia which is presenting a credible threat again to the western states and the rules-based system and that must be taken seriously.’

Asked if there was a naval battle between Britain and Russia who would win, Rear Admiral Keith Blount, assistant chief of the naval staff, said: ‘We would.’

And Air Vice Marshall Harvey Smyth, air officer commanding No 1 group, said Russia was no match for the UK when it came to aircraft carriers. It emerged earlier this year that Russian submarine activity in the North Atlantic has increased tenfold in recent years.