The first visitors to Disneyland’s long-awaited Star Wars: Galaxy’s Edge attraction will get just four hours to explore it.

There’s just six weeks to go before it opens at the California theme park, on May 31, along with the Millennium Falcon: Smugglers Run ride.

And it has been revealed that guests will only be allowed to enter the area during an allotted four-hour window – although it is not clear how it will be enforced.

The first visitors to Disneyland’s long-awaited Star Wars: Galaxy’s Edge will get just four hours to explore the attraction. Pictured is an artist’s impression of what the land will look like

Disneyland announced last week that guests planning to visit Star Wars: Galaxy’s Edge between May 31 and June 23 would need theme park admission and a reservation.

Reservations can only currently be secured by booking a stay at a Disneyland Resort hotel.

Disney says another way to make a reservation will be available on the resort’s website from May 2.

According to the Los Angeles Times, fans who have booked into one of the resort’s three hotels to guarantee access to Galaxy’s Edge during the opening period received emails last weekend informing them of their time limit.

Some fans took to Twitter, worried they wouldn’t be able to completely enjoy the land in within their time.

Cabey B wrote: ‘The Galaxy’s Edge launch is a scam. They announced it and made no mention of limiting the reservations to FOUR HOURS and only ONE per hotel reservation no matter how many days you’re there. What a joke. @DisneyParks should be ashamed.’ 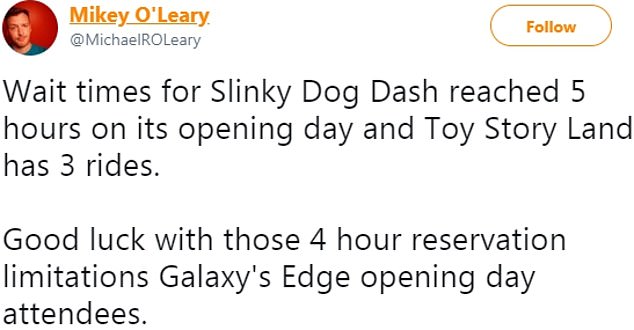 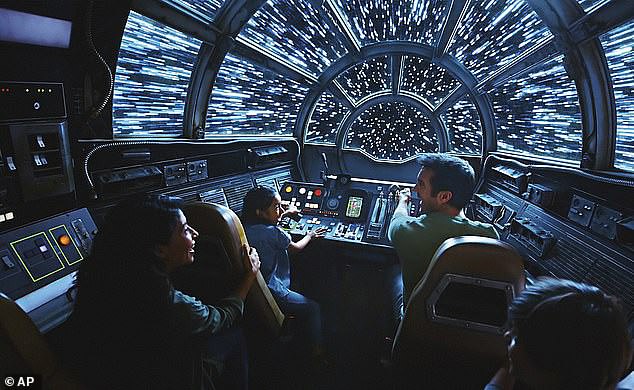 Meanwhile, last month it was revealed that Disneyland is set to offer bathroom passes to Star Wars fans waiting to ride its new Millennium Falcon attraction.

With long queues expected, those unable to undergo a lengthy wait without a comfort break can request a pass for the toilet and return to their place in the queue.

A second ride called Star Wars: Rise of the Resistance will open later in the year at Disneyland.

In addition, the same Star Wars: Galaxy’s Edge land will open for visitors to Florida’s Disney World Resort on August 29. 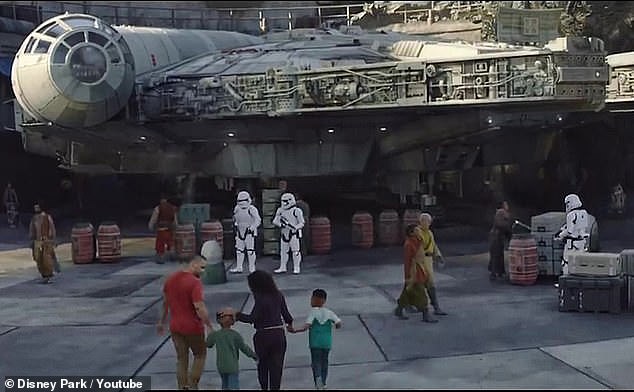 Disneyland announced last week that guests planning to visit Star Wars: Galaxy’s Edge between May 31 and June 23 would need theme park admission and a reservation

At both parks, guests will also be able to build their own personal droids and lightsabers and feast on Star Wars-style food and drink.