Fish DO feel pain in a ‘strikingly similar’ way to mammals including humans, study reveals

Fish feel pain in a way that is ‘strikingly similar’ to humans and they hyperventilate and stop eating when they are suffering, according to a new study.

The review of fish behaviour, from the University of Liverpool, presents evidence that goldfish given an electric shock in one part of their tank will stop feeding there for three days, starving themselves.

A type of fish called a perch, when its mouth is damaged by a fishing hook, will not feed as frequently, suggesting it hurts to do so.

Fish have also been seen hyperventilating, waving injured tails and rubbing parts of their bodies when they are injured.

The review of fish behaviour, from the University of Liverpool, presents evidence that goldfish given an electric shock in one part of their tank will stop feeding there for three days, starving themselves

This leads experts to suggest that they should be fished more humanely, using less damaging hooks, with anglers delivering a blow to a fish’s head and cutting the gills so that it dies quickly after being landed.

Dr Lynne Sneddon, the author of the review from the Institute of Integrative Biology at the University of Liverpool, said: ‘When subject to a potentially painful event fishes show adverse changes in behaviour such as suspension of feeding and reduced activity, which are prevented when a pain-relieving drug is provided.

‘When the fish’s lips are given a painful stimulus they rub the mouth against the side of the tank much like we rub our toe when we stub it.

‘If we accept fish experience pain, then this has important implications for how we treat them. Care should be taken when handling fish to avoid damaging their sensitive skin and they should be humanely caught and killed.’

All animals are able to detect when they are injured, showing the ‘brief reflex’ of moving away from whatever is causing the injury.

But there has been debate over whether fish feel pain, because, unlike people, they have a simpler single-layered forebrain.

The test of whether an animal feels pain comes in whether they change their long-term behaviour and decision-making after injury, and if painkillers can fix this.

The review, published in the journal Philosophical Transactions of the Royal Society B, found zebrafish exposed to painful hot temperatures do not swim as far, but that this changed behaviour disappears when aspirin or morphine is added to their water. 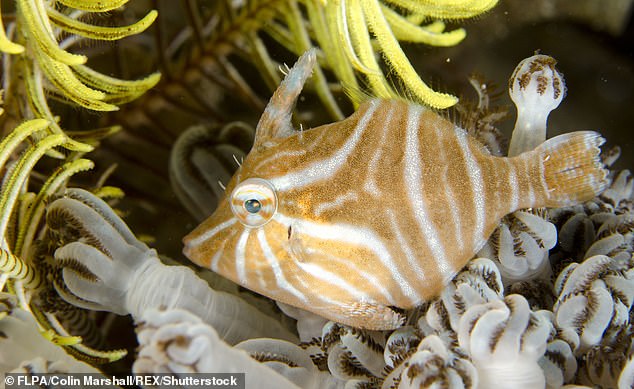 Fish have also been seen hyperventilating, waving injured tails and rubbing parts of their bodies when they are injured

There is also evidence that fish have the same receptors for pain in their nervous system as humans, and show similar ‘firing’ patterns in their nerve cells in response to it.

However a similar review, done in 2013 by the University of Wyoming, concluded that fish are unlikely to feel pain, as they do not have a multi-layered structure in the cortex of their brain as humans do.

Elisa Allen, director of animal charity PETA, said: ‘Anyone who has seen fish gasping for air while trapped in a trawler’s net, impaled at the end of a line, or floundering on the deck of a boat is sure to recognise that these animals experience fear, pain, and distress – just like humans do.

‘Fish are intelligent, have unique personalities, and value their own lives, and the more we learn about these fascinating animals, the harder it is for humans to justify sticking a fork in them.’