The fisherman who became lost in the backwoods of Oregon for 17 days has spoken out about his survival ordeal, describing how he stayed alive and praising the search teams that ultimately rescued him.

Harry Burleigh, 69, on Thursday gave a detailed account of his harrowing ordeal in May, when he took a wrong turn on a trail during a short hike at Twin Lakes in Douglas County, Oregon.

Burleigh, an experienced outdoorsman, explained that after a year of being cooped up due to the pandemic, he became careless and didn’t follow the proper precautions he should have.

‘I dropped all of my protocols that I would normally do. That enthusiasm -I want to get out there and enjoy,’ he said. ‘I had the need for a thrill.’

Harry Burleigh, 69, on Thursday gave a detailed account of his harrowing ordeal in May, when he took a wrong turn on a trail during a short hike at Twin Lakes 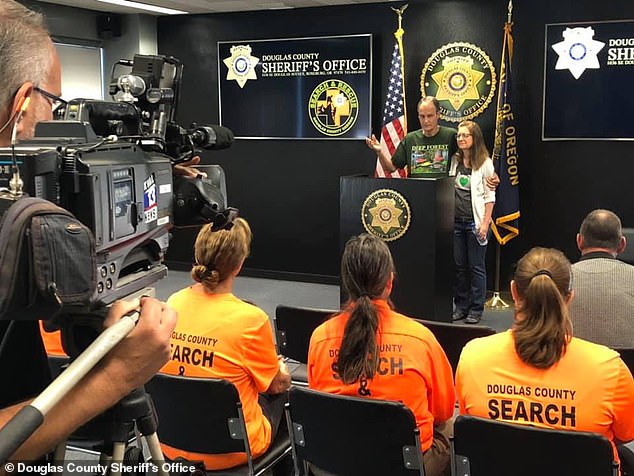 Burleigh, an experienced outdoorsman, explained that after a year of being cooped up due to the pandemic, he became careless and didn’t follow the proper precautions 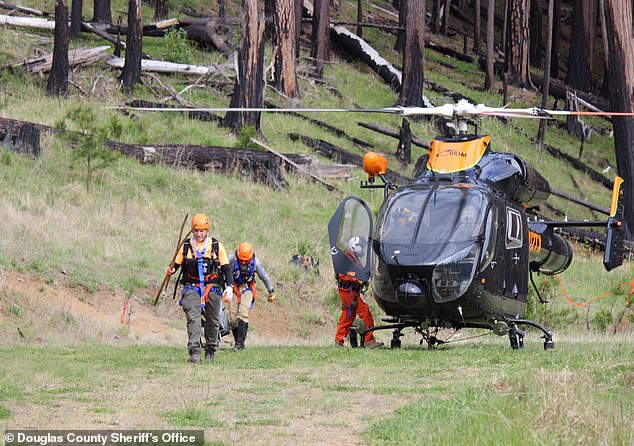 Rescue teams are seen during the search for Burleigh in May. He was lost in the wilderness for 17 days, surviving by eating bugs and drinking his own urine

Burleigh said that when his fishing trip was cut short due to high winds on May 6, he decided to stop off at Twin Lakes for a short hike on his way back to his home in Roseburg.

Burleigh signed the log at the trailhead, but because the hike to the lakes was just over a mile, he decided not to bring a water bottle or any supplies other than a few items in his small fishing creel.

With no hat or navigational equipment and wearing just light hiking sandals, Burleigh now admits that he was disastrously unprepared for the ordeal that followed.

Burleigh took the trail across Twin Lakes Creek and came what appeared to be a fork, and says the trail markers were obscured by snow. Instead of taking the hard left turn towards the lakes, Burleigh turned right, continuing downhill toward what he thought was the lake.

As he pressed on, he could not find the lake, and tried bushwacking to get back to the trail he’d started from. Suddenly, he realized that darkness was falling, and he had no cell phone signal.

Burleigh spent his first sleepless night in the wild laying on an area he cleared out under a fallen log. Snow began to fall. 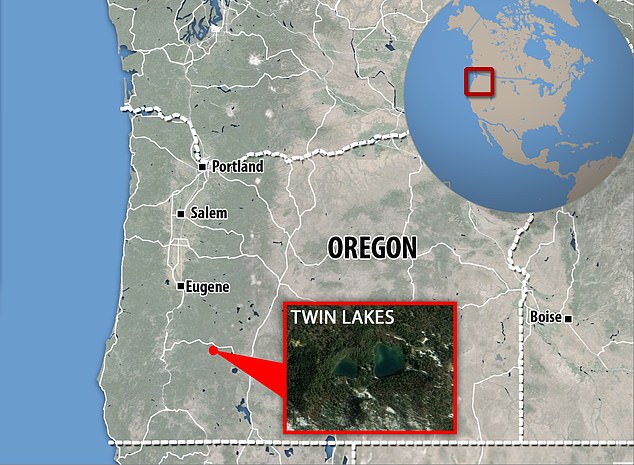 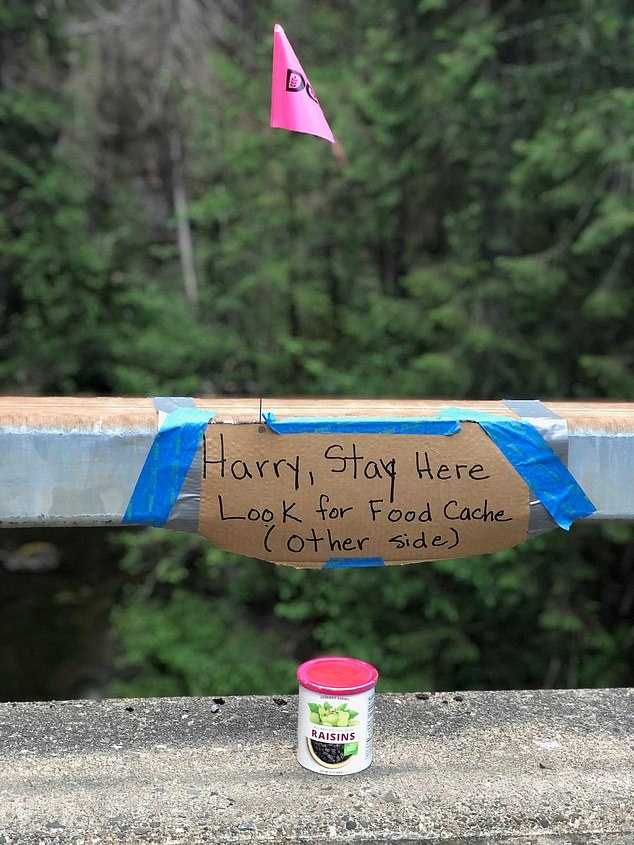 During the search, rescuers left food parcels and notes for Burleigh near where they thought he became lost

Without water, he tried to get down a steep ravine to a creek, but fell, twisting his ankle and hitting his head. ‘In an instant everything became very serious,’ he recalled.

Burleigh made camp by a creek, where he was able to start a fire using a small pocket magnifier that his step-father had given him 40 years earlier, which he kept in his wallet.

Using a small fillet knife, he was able to craft a hat out of his creel bag, and then repurposed his underwear into a hat to keep his head warm. On his fifth day in the wilderness, he spotted a plane just 100 feet overhead, but the pilot was unable to see him through the trees.

Burleigh decided to head for higher ground, where there was more wood for his fire and he’d be easier to spot. But away from the creeks in the deep ravines, he had no source of water.

‘I drank my own urine. It hydrates,’ he explained. ‘That’s pretty much how my days were.’

Burleigh said he found the strength to push on in the hope of making it home to be with his wife once more.

‘I wanted one more day, I wanted to get home to see her,’ he said, visibly emotional. 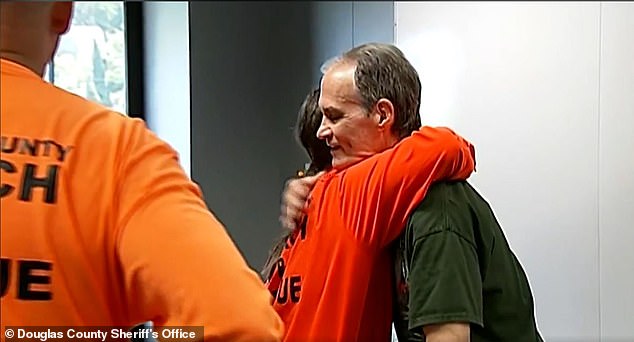 Burleigh said he found the strength to push on in the hope of making it home to be with his wife once more. They are seen above being reunited 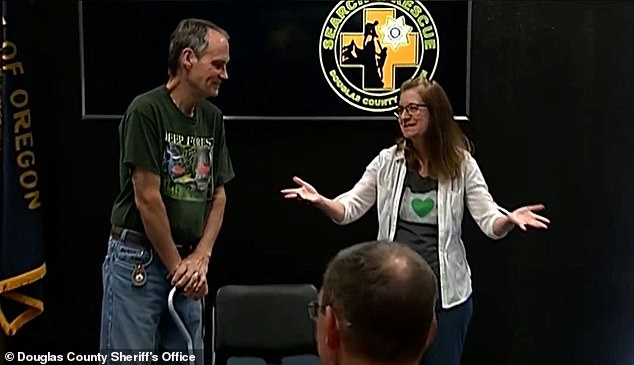 At one point, Burleigh, delirious with hunger and exhaustion, spotted a small waterfall and became mesmerized, wondering if he was the only human who had ever seen it.

On top of a ridge, he found a small pool of stagnant brown water, which he called his ‘teapot’, and decided to make camp there in hopes of being spotted.

Relying on water from the ‘teapot’ and eating small grubs, he holed up in a makeshift shelter and built signals from downed logs. He was unable to start another fire, his hands shaking too much.

On the morning of May 23, after 17 days in the wilderness, Burleigh believed that he would likely not make it out alive. ‘I accepted my path,’ he recalled.

As he staggered to get some stagnant water, he suddenly heard a bellow, and a search and rescue crew member was upon him. The rescuer handed him a bottle of Gatorade, which he says tasted like ‘honey from God.’

The rescuer asked what he’d been eating, and when he explained he’d been excited to find a snail, the rescuer joked that he too loved escargot and bellowed a laugh.

Burleigh says the sound of another human’s laugh after 17 days in the wild was ‘euphoric.’

He is continuing to undergo medical monitoring for issues with his feet and gall bladder. 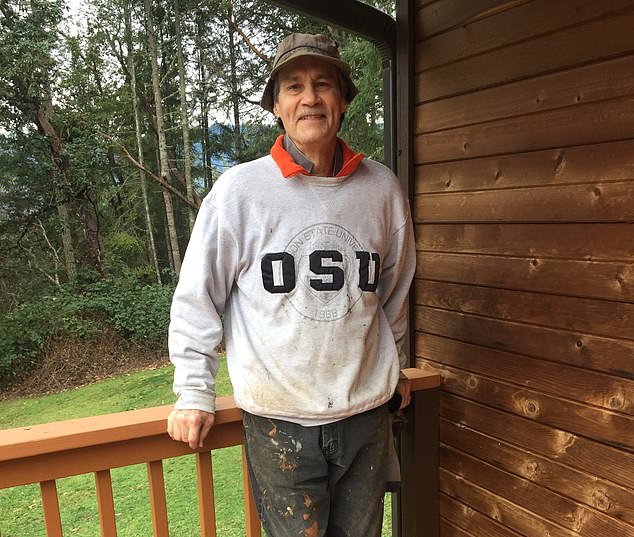 Missing fisherman Harry Burleigh, 69, was found alive in May after spending 17 days lost in the Twin Lakes area of Oregon

After his rescue, his wife Stacy Burleigh said the rescue was ‘the best of news’ in a Roseburg Tracker Facebook group geared towards finding Harry.

‘Thank you to all of you on Roseburg tracker for your prayers, love, and support. After 16 days this is pretty miraculous’, she added.

‘Thank you to all of the SAR teams that put in all the hard work to find him. We are forever grateful!

Eighteen agencies were involved in the lengthy rescue mission, some from hours away.

Douglas County Sheriff’s Sergeant Brad O’Dell said: ‘This was the outcome we all have been looking for in this case,

‘It is because of our determined Search and Rescue Teams and the partnerships we have with out SAR teams from around the state, that Mr Burleigh has been re-united with his family this evening.’

The Umpqua National Forest, where Burleigh was found, covers more than 983,000 acres.