A bizarre new beauty trend is taking social media by storm – and causing plenty of controversy at the same time: fishtail eyebrows.

The intense brow trend actually began with people Photoshopping old pictures of themselves so that the arch of their brow appeared split in two with the top part flicking upward to resemble the tail of the fish.

However, after that trend took off, people have begun implementing the look in real life, either drawing – or in some cases actually altering – their brows to resemble the tail of a fish.

Viral: Fishtail eyebrows are the latest bizarre trend to take over Instagram and this time beauty guru Huda Kattan (pictured) even got in on the action 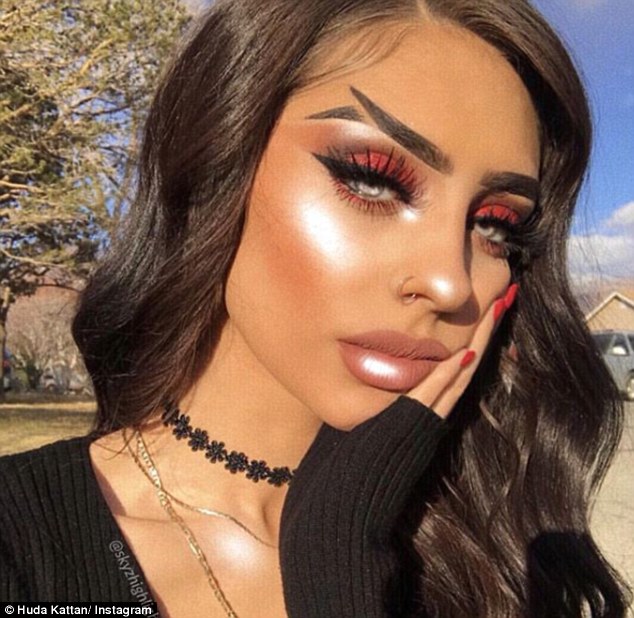 Wow: The intense eye look actually started out as regular pictures being photoshopped so that the arch of the brow is split in two with the top part facing upward 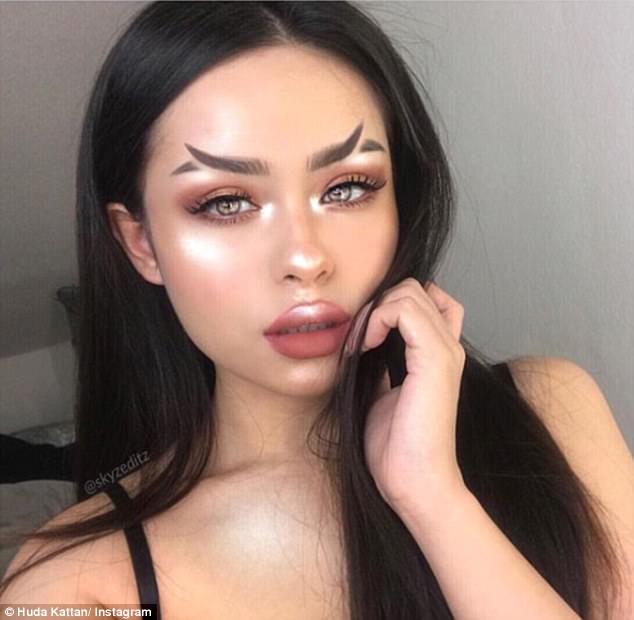 Beauty: Since the trend started many people have followed suit and posted their edits on Instagram, while others actually cut and drew on their eyebrows Torn: Some people are into the cool fishtail brow trend while others are very confused

First, he started with a photo of beauty guru Huda Kattan, 34, with fishtails brows that was edited by the account, Skyz Highlight, who photoshops highlighter onto makeup bloggers faces.

Then, Stefan, who started the trend, added the fishtail brow to Huda and showed exactly how he creates it.

He starts off the fishtail edits with the photo of the person and erases a little part of their eyebrow by the arch.

After he erases a little section of one eyebrow he then copies the other brow and pastes it upside down onto the section of the brow that he originally erased.

When he’s finished pasting the eyebrow he edits it perfectly to look like the top of the arch is flicked upwards.

Since posting his edit of Huda he’s done many more edits of different beauty bloggers such as Hayley Bui and Destiny. 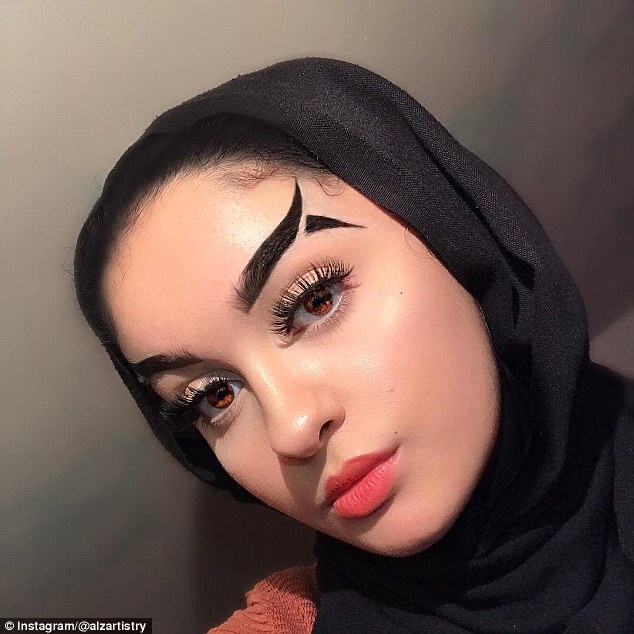 Amazing: Another makeup artist drew the fishtail brows on her face using black eyeliner to give it perfect shape

People cannot stop trying the trend that’s taking over Instagram and instead of just editing their photos, people are actually drawing their brows on to look like this.

One beauty blogger, Veronica Rose, actually drew her brows on as well as Kayla Sanchez who drew the shape on her own brows and didn’t make them too dramatic.

According to brow specialist Piret Aava – also known as the eyebrow doctor – no matter how much you like the trend, drawing on the shape is as bold as anyone should be.

Speaking to DailyMail.com she warned against doing anything more permanent, such as microblading, the process of tattooing an eyebrow, noting that the rather striking silhouette will likely turn into a regret later down the line – no matter how trendy it is now.

‘Assuming these are done with makeup and not a tattoo (like microblading), there are no long term effects,’ she explained, before adding: ‘Except you will probably think, “What was I thinking?” eventually!’

While the trend is definitely interesting, the internet is completely divided over the look and can’t tell if they love it or hate it.

One user created a hilarious meme of a side-by-side photo of someone trying out the fishtail brows next to an enlarged photo of the devil mask emoji. 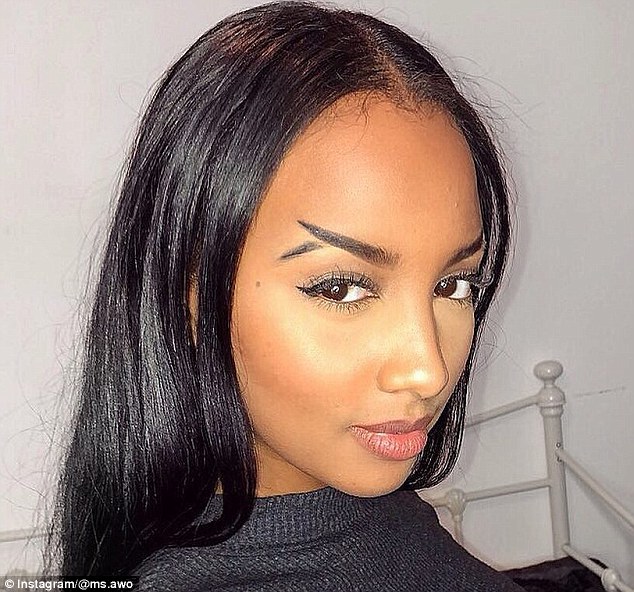 Natural: This beauty blogger tried the trend but made hers look more natural 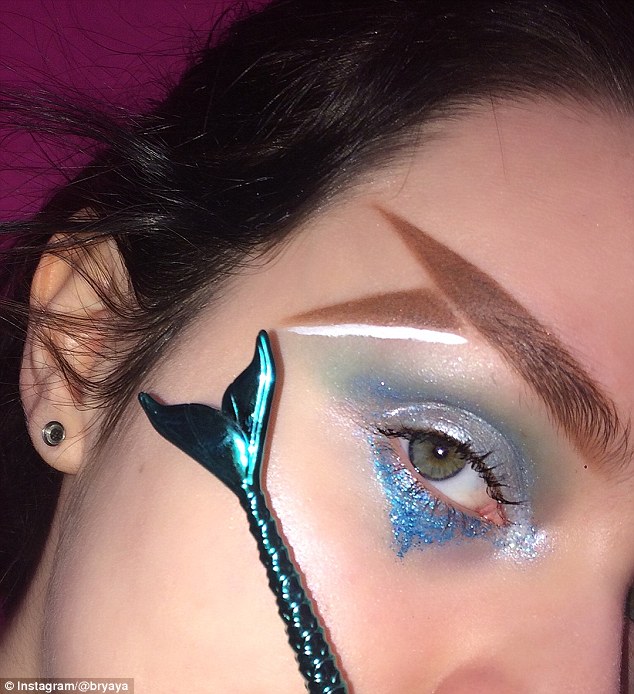 Amazing: This artistic makeup blogger turned her entire eye into a fish and drew her brows in the shape of a tail using her makeup brush 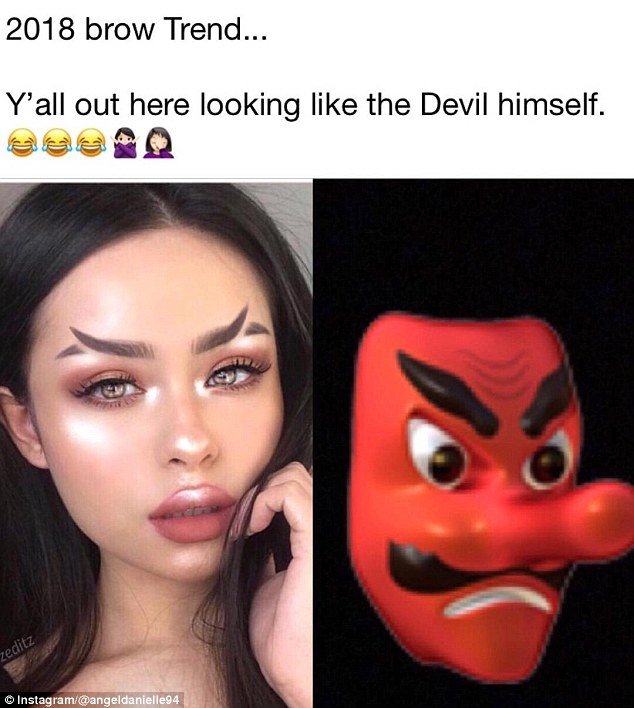 Amazing: Since the brow trend started to go viral, people could not stop poking fun at it

Meanwhile, other people on Twitter had a lot to say about the latest beauty idea, both good and bad.

Those who were for the brows had only nice things to say as one user wrote, ‘From all the brow trends which I’ve thought are stupid, I actually like fishtail brows.’

Another user shared, ‘Tbh I like this fishtail brows trend lol,’ and one girl wrote, ‘Fishtail brows is a thing I could definitely get behind of.’

Despite some people saying they actually liked the trend, most of the feedback about the brows was negative as people found themselves seriously confused why this is even a thing.

‘Ya’ll out here looking like the devil himself,’ someone tweeted out with a photo of a devil next to someone with the brows.

One user even wrote, ‘From my point of view should be called devil brows no offense to the makeup artists,’ while someone else said, ‘Fishtail brows? Issa no from me.’

Mad: One girl was seriously annoyed that yet another bizarre beauty trend was going viral

Dislike: A lot of people shared that they don’t like the new trend at all and think it’s very weird

Funny: Most comments were comparing the eyebrow trend to those of the devil

Don’t touch: This girl shared that people should stop touching their eyebrows and just leave them alone

Fans: Meanwhile, despite everyone hating on the trend, some people are actually into it, like this girl

Love it: This girl seems to actually like the fishtail brow trend too

Some users were seriously bothered by the brows and took to Twitter to vent about all the latest beauty trends and how crazy they are becoming.

‘First there was the nightmare that is braided brows. And now here comes fishtail brows. Please stop trying to do weird things with your eyebrows it doesn’t work,’ said one girl.

While someone else tweeted, ‘It just screams “when you’re really into makeup but also into Satan.”‘

In response to all of the people who are editing the brows on their faces instead of actually drawing them for the sole reason of content, someone said, ‘In reality no one really looks normal when they step out into the real world.