Fitbit is the worst smartphone app to use if you’ve got a low battery, a new report suggests.

Switzerland-based cloud storage company pCloud analysed 100 of the most popular apps and the demands they make on your device.

The worst apps for draining battery were found to be Fitbit and Verizon, which were at the top of the pile with a score of 92 out of 100, followed by Uber and Skype.

In joint fifth place was Facebook, Airbnb and live streaming platform BIGO LIVE – all with a score of 82 out of 100.

Also in the top 10 were Instagram, Snapchat, WhatsApp and Amazon, as well as dating apps Tinder, Bumble and Grindr.

The top five worst apps for draining your phone battery were found to be Fitbit at the top of the pile, followed by Verizon, Uber, Skype and, in fifth place, Facebook. Social media apps seem to be the best type of app for draining batteries. Interestingly, Twitter was outside the top 20

‘With 93 per cent of smartphone users admitting to using apps daily, our phone batteries are starting to suffer, leaving us phoneless by the end of the day,’ said pCloud in a blog post.

‘We wanted to find out the apps that are the most demanding on our phone, so conducted a study to discover which apps are the secret phone killers.’

pCloud analysed three factors – the applications each app uses, such as location or camera, the battery these applications use, and whether dark mode is available. 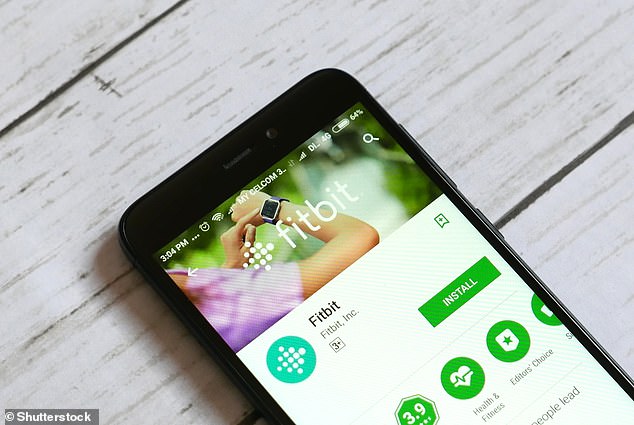 Dark mode gives users the option to turn the background of their app interface from white to black to make it easier on the eye and save up to 30 per cent more battery power on a phone.

The top two offenders – Fitbit and Verizon – were found to permit 14 out of the 16 available features to run in the background, including the four most demanding (camera, location, microphone and Wi-Fi connection).

Twitter, one of the social media giants, was notably absent from the top 20, coming in at number 25.

pCloud also looked at the apps taking up the most memory, based on the average phone holding up to 64GB of inbuilt storage, and the operating system roughly taking up to 10GB.

United Airlines was found to be the worst in this category, followed by ridesharing services Lyft and Uber.

Fitbit and Facebook were also in the top five for this category.

Users of the United Airlines app should delete it from their device if they don’t have any upcoming flights for a while, according to pCloud.

Meanwhile, food delivery apps Uber Eats, My Mcdonalds and Yelp Food all made it in the top 30. 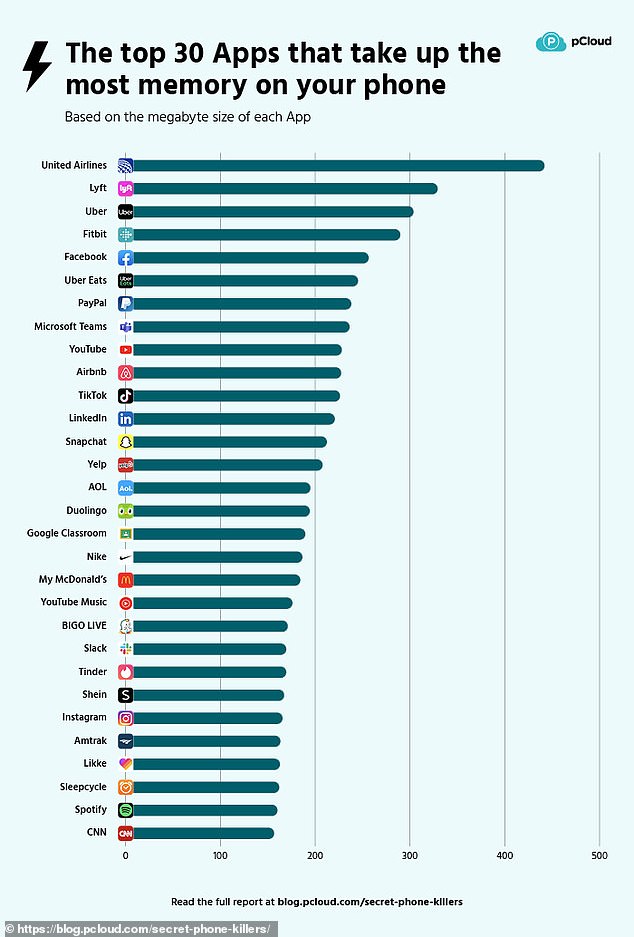 United Airlines is the app that takes up the most memory, followed by Lyft, Uber,  Fitbit and Facebook

pCloud said a good tip is to just stick to one food delivery app, considering they contain the same or similar restaurants.

It also said people who use video conferencing on their phone should opt for Zoom and Skype, and not Microsoft Teams, if they want to save battery.

Microsoft Teams was the eight-worst app for taking up memory, while Zoom and Skype didn’t make the top 30.

‘Overall, the study clearly indicates that social media apps are still one of the biggest phone killers when it comes to draining your battery,’ pCloud said.

‘However, it also highlights that apps such as fitness or travel – which require multiple applications to run in the background – are even more demanding on our phone’s battery and storage systems.’

Although mobile phones can do more than ever before, their batteries don’t seem to have the lasting power they once did.

Gone are the days where people could expect their mobile to last an entire day, which is often due to the fact we are using them to do so much more.

But there are certain tricks people can follow to make their phone last hours longer, as outlined by Stuff NZ.

Focus on your battery level

Normally people have been told to let their phone’s battery drain completely before they charge it again, but the website says this is a big no-no.

One of their main tips for people to get the best from their phone battery is to charge it a little bit, but regularly.

The aim is to keep the battery above 50 per cent and to regularly top it up as the day goes on.

Have more than one charger on rotation

It is recommended that people invest in buying multiple chargers so that they’re not stranded with a phone that completely runs out of battery.

Ideally people should have one for home, work and their car and should aim to buy ones that charge quickly.

‘For example, the iPhone 6 supports 1.6 amps and comes with a 1-amp charger. If you buy a 2amp charger you’ll ensure it charges as fast as possible,’ Stuff said.

Another item people should consider buying is a portable charger as people can often recharge their devices 10 times before the charger needs to be charged itself.

Unfortunately there are a variety of features on iPhones that can drain the battery at a speed of light, but these can be easily fixed.

It is recommended that people turn off vibrate or haptic feedback as the buzzing can drain the battery.

Both iPhones and Androids have a low power mode which helps conserve the battery, as it does things like prevent automatic downloads and turns off the screen faster.

‘Closing apps doesn’t save power but some apps use more battery life than others,’ Stuff said.

‘Facebook is well known as one of the worst culprits. You can check which one and delete them and start accessing them via a web browser.’

According to Jacek Jasieniak a professor of materials science at Monash University in Melbourne, Australia, can get a little more ‘juice’ from your battery under hotter conditions.

‘Fortunately, for most parts of the country, temperatures in Australia sit between 0°C and 45°C throughout the year,’ Professor Jasieniak previously wrote for The Conversation.

‘This is the exact range in which lithium-ion batteries can be stored to maintain optimal long-term charge capacity.

Below 0°C, the amount of power available within the battery system is reduced because of a restriction in the movement of lithium metal and lithium ions within the electrodes and through the electrolyte.’