Gyms and swimming pools in England are reopening for the first time since the U.K. went into lockdown as public health officials praise the benefits of exercise in fighting COVID-19.

The government has announced a fresh attack on obesity as part of the move, hoping that a fitter nation might be able to minimize the impact of future waves of the virus.

Fitness chain David Lloyd clubs opened the doors of its branch in Hampton, Twickenham, at exactly midnight on Saturday to hold what is believed to be the first post-lockdown indoor exercise class. 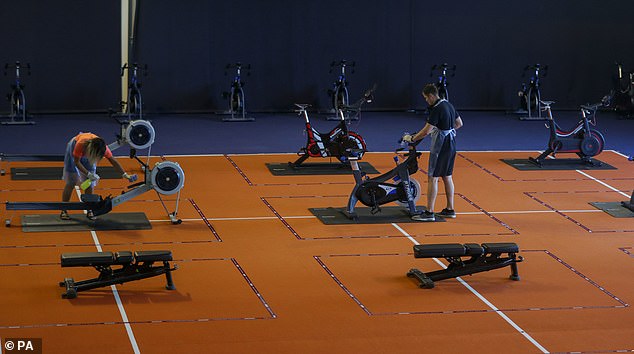 Gym equipment is cleaned at the David Lloyd health club in Worcester, preparing for their reopening today along with gyms across the country as lockdown measures continue to ease 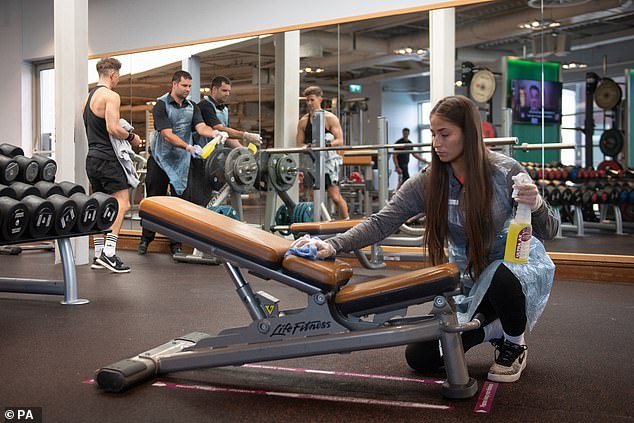 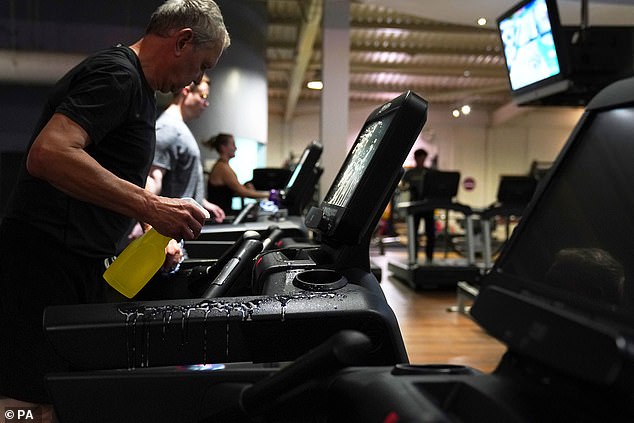 As well as the chance to take part in a ‘Blitz’ HIIT (high intensity interval training) class, those who had patiently queued were also given free rein of the facilities in the early hours of the morning.

Elsewhere, the Aquabatics synchronised swimming team were happy to be back in the water at the London Aquatic Centre at the Queen Elizabeth Olympic Park in London.

Gym-goers are being asked to follow some drastic measures in a bid to make working out as safe as possible.

Water fountains will not be in use and will be replaced by hand sanitiser.

People are expected to wipe down machines and equipment after use, so it is safe for the next person’s workout.

Chain gyms are allowed to keep changing rooms open, but this is at each fitness centre’s discretion.

People are advised to arrive ready in workout clothes, to avoid people gathering in changing rooms. 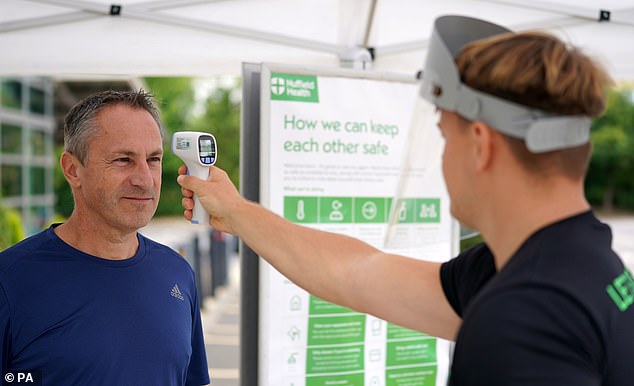 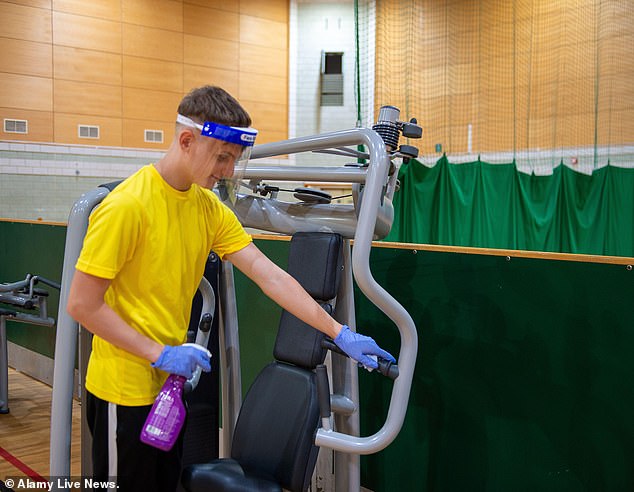 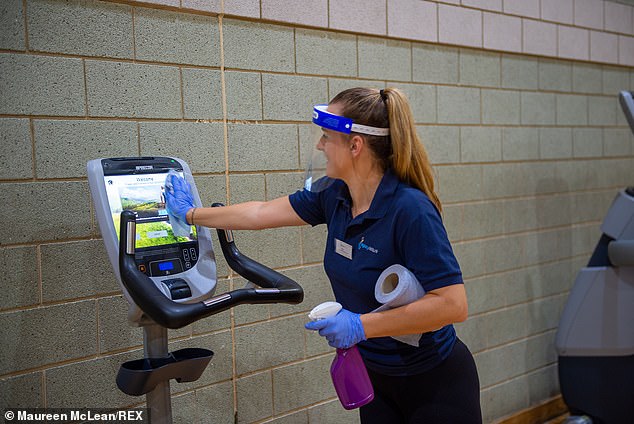 Indoor gyms in Northern Ireland opened earlier this month, but they remain shut in Scotland and Wales.

Outdoor gyms have been open in England since July 4.

UKactive, the industry body which represents Britain’s gyms, said it spent last week in talk with Ministers to set guidance for its 3,500 member firms.

It has made sure the fitness sector is ‘aligned’ to Government guidance in the run-up to the sector’s reopening and said it is following guidance set by the World Health Organisation that people should not wear masks while exercising indoors as they may reduce the ability to breathe comfortably.

Under Government guidelines drawn up in consultation with UKactive, gyms are instead ensuring members keep two metres apart. The Government has even suggested allowing one person per 100 square feet of usable space.

PureGym, which has more than 260 outlets, said that means a club that normally accommodates 180 to 200 people at peak times will hold nearer 130, including staff.

Virgin Active will open the majority of its 42 UK gyms on Saturday but members will not be required to wear face masks.

David Lloyd also confirmed masks will not be mandatory in its 100 UK health clubs.

Other safety measures include rigorous cleaning schedules throughout the day, using disinfectant certified to kill viruses within 60 seconds, and checking employees’ temperature on arrival. The gym chains also have a range of offers to help retain members.

UKactive said: ‘We note the Government’s decision on face coverings on shops and public transport where it is harder to keep social distancing in place.

‘However, we also support the Government’s consideration that there need to be practical requirements for each sector.

‘As such, when it comes to gyms and leisure centres, the appropriate mitigation measures will be in place to make sure that social distancing remains. Therefore we would not expect face coverings to become mandatory in our facilities.’ 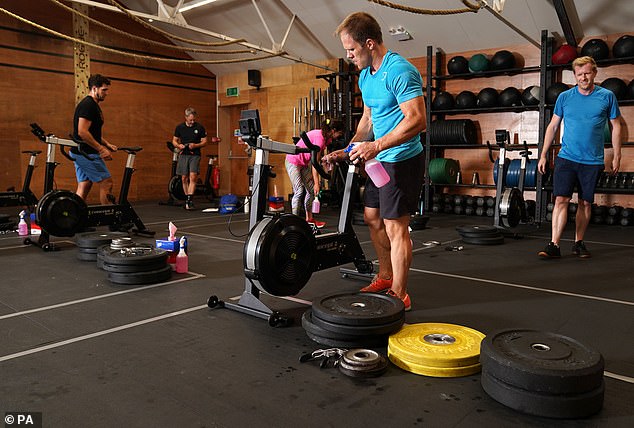 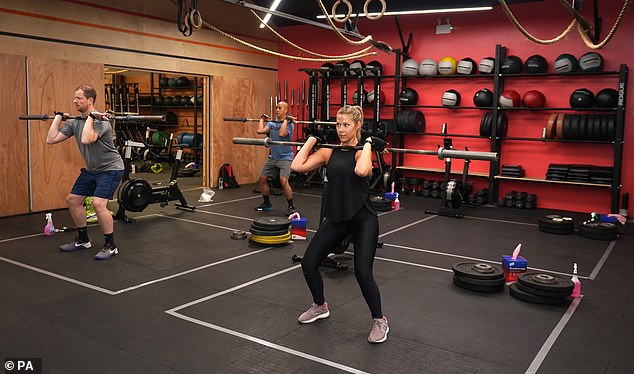 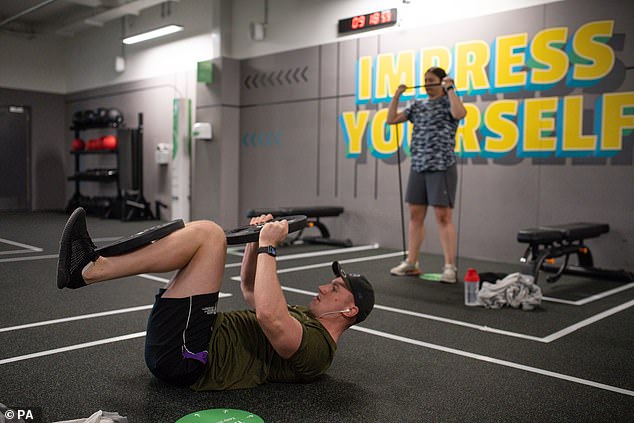 Gym members exercise at PureGym in Leamington Spa, which is re-opening for the first time 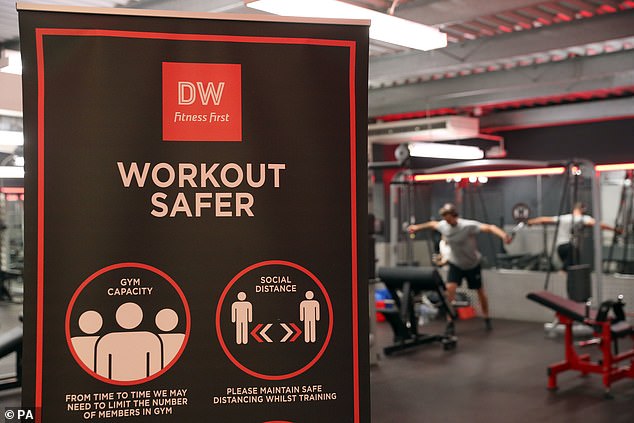 Social distancing signs at DW Fitness First, Basingstoke which has wecolmed customers back 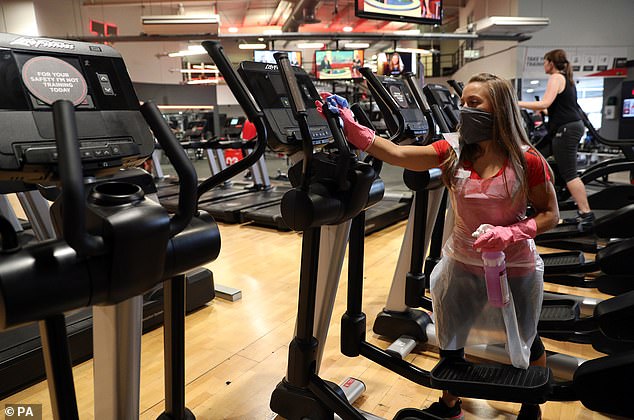 Gym users have taken to social media to share their views on the reopening of gyms and swimming pools across the country.

Fitness fanatics welcomed the relaxation of the lockdown restrictions as gyms and leisure facilities have been some of the last to be given permission to reopen.

Lorraine Young tweeted: ‘Had a fabulous swim this morning. Thank you to all the staff who made us feel so welcome.

‘It’s great to be back. Really made me smile.’

Others expressed concerns about whether it was the right time for the Government to allow gyms to reopen.

Joanne Townsend said: ‘Not sure I agree with gyms opening yet, perfect place to breathe in others germs at the best of the times.

‘The deep cleaning will not last. There are a lot of people scurried back there today in their droves.’

Rory Lange added: ‘Gyms have all the precautionary measures in place and have to follow strict hygiene and social distancing measures to remain open to the public.

‘If people do not use them responsibly, then they will shut. This is a good step forward in the reopening of our economy.’ 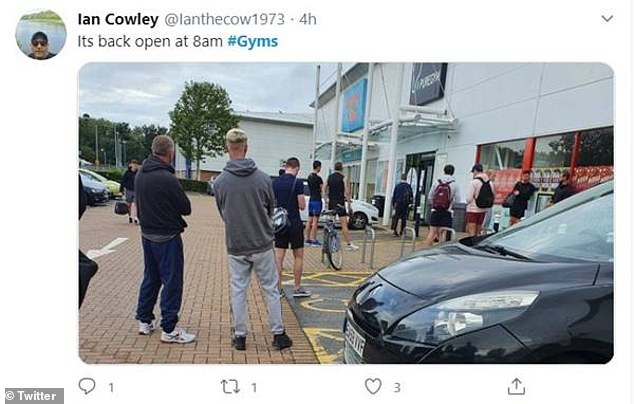 Industry experts have warned that the lockdown home workout boom may see gyms struggle to bring members back.

Research by gym trade body UKactive found that 87 per cent of gym customers planned on heading back to the gym now lockdown restrictions have been eased.

But the Gym Group – which runs 179 gyms in the UK – said that 178,000 people had cancelled their memberships with one of its 179 gyms, which are mainly across England.

Anthony Franklin, founder of gym booking app Fibodo, told the Telegraph: ‘There is a risk that some gym-goers have formed new exercise habits… meaning they are in no rush to return to the gym.’

He added that people may have taken up running, online fitness classes or PT sessions in parks as alternatives to heading to the gym.

Health Secretary Matt Hancock has confirmed that gyms and sports facilities in Luton and Blackburn with Darwen will remain closed because of a spike in cases in those areas.

If cases stay low then more will be able to reopen this year.

Casinos, leisure centres and bowling alleys in England will be allowed to reopen in August.

Theatres, pantos and musicals can finally return from August 1.