A fitness photographer ‘spied on and drugged male models’ who posed for him because he enjoyed ‘robbing them of their masculinity,’ a court heard.

Nigel Wilkinson, 45, lured his victims to his home for photo shoots – but his business was a ‘front’ to fulfil his ‘depraved yearnings’, the jury at Bristol Crown Court was told today.

He offered his victims fully-clothed professional pictures but instead he allegedly drugged them and took intimate photographs.

One also claimed he was raped.

Wilkinson, who the jury was told is gay, allegedly said during an online chat given in evidence ‘I get a kick out of robbing a straight guy out of his masculinity’.

During the Skype conversation Wilkinson allegedly said he ‘liked to have sex with straight men – and that he liked to do it without them being aware of it’.

He pleaded not guilty to 13 charges including one of rape, one sexual assault, five of voyeurism and six of administering a substance with intent.

Prosecuting, Sarah Regan said: ‘It is clear that he tapped into the modern obsession with looking good and promoting the self, to add to the number of followers and likes on social media.

‘None of that is illegal, and it is in fact a very astute business plan. But it very quickly morphed into a vehicle for the depraved yearnings of Nigel Wilkinson.’

Photographer Nigel Wilkinson, 45, denies he drugged and raped male models who posed for him in free shoots

The court heard he offered to pay his victims for a fully-clothed photoshoot – as long as he could also take a few ‘semi-nude, arty, tasteful pictures’ to keep for himself.

On his business’ social media pages, he described himself as: a ‘freelance photographer with a fitness background’.

He went on: ‘I am passionate about bringing out the best in my clients. I am a fun and creative individual and will make you feel at ease very quickly..’

But Wilkinson’s first alleged victim, whom Wilkinson is also charged with raping and sexually assaulting, claims that Wilkinson took two stark naked photos of him that he was not aware were being taken.

And the same victim alleges that, the morning after a 20-minute fitness shoot at Wilkinson’s home in Bristol, he woke up face down and stark naked in the photographer’s bed.

He says that Wilkinson was behind him in an ‘obviously sexual’ position.

The court heard in a Skype conversation in October 2014 – eight months after Wilkinson’s photoshoot with his first victim – he said to an online user based in Romania: ‘I get a kick out of robbing a straight guy of his masculinity’.

When asked by the other Skype user whether he was ‘into drunk sleeping guys’, Wilkinson – under the alias Straight Boy Lover – replied ‘very much so,’ it was said.

And he added: ‘It’s quite nice, getting one up on a lad…..I get a kick out of robbing a straight guy out of his masculinity.’

When asked whether he had managed to penetrate a sleeper, he replied: ‘Yes, many times.’

Wilkinson claimed in the chat that all his straight male victims were ‘definitely’ virgins, and added: ‘I love dumb jocks and guys stupid enough to sleep next to me.’

Between February 12, 2014, and December 12, 2015, six of Wilkinson’s models were allegedly drugged by the photographer for the purposes of Wilkinson performing sexual activities on them.

Of these, four were also subject to voyeurism, whereby Wilkinson filmed them doing private acts without their consent, for his own sexual gratification.

The court heard that Wilkinson, who previously worked in retail, set up his amateur fitness photography business, Wilko Photography, at some point in 2013.

It was heard that Wilkinson contacted all of his victims – with the exception of one – through Instagram, rather than them contacting him.

And when contacting his first victim in January 2014, Wilkinson invented a fictitious photographer called ‘Simon’ the court was told. 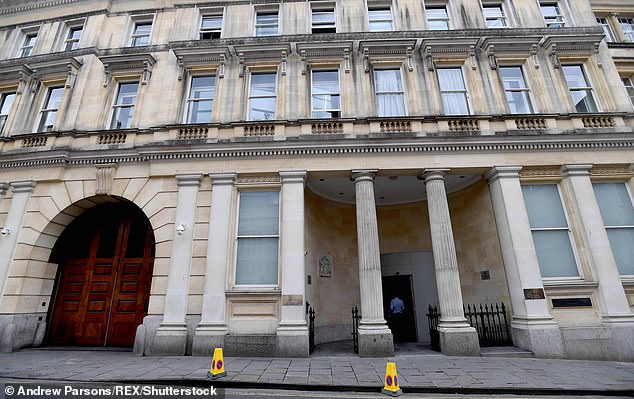 He allegedly contacted his victim posing as Simon, before then getting in touch with the young man himself, claiming to be an amateur photographer that supported Simon on shoots.

Miss Regan said: ‘Quite why he created this elaborate lie is not clear, but it became part of a pattern of deception deployed by Wilkinson when he first made contact with prospective males.

‘Wilkinson messaged his victim saying he would be happy to do a fully-clothed photoshoot if, in exchange, he could have some semi-nude, tasteful pictures for his own use.’

The alleged victim claims he was not paid for the shoot Wilkinson did and that the photographer took him for a meal.

He also claimed that at some point during the meal, he became aware that ‘Simon’ was in fact Wilkinson.

The pair returned to Wilkinson’s home, where the victim began to collect his stuff to return home.

But he says he was offered a drink by Wilkinson, which he believed to be vodka and coke, before waking up, face down and naked, in Wilkinson’s bed.

The man recalled feeling uncomfortable to the court, and said: ‘I wasn’t capable of really moving, and I don’t think I could even really say anything.

‘I’m pretty much definitely sure he was doing stuff to me. I’m 99% sure he tried to have sex with me.’