However, one Santa Monica fitness guru’s videos are going viral for a whole lot more than just fitness goals – because her paralyzed boyfriend is there sweating it out alongside her in a series of tough workouts that have not only helped to inspire thousands, they have also helped him to regain feeling in the once-dormant connections of his body.

It should come as no surprise then that Jessica Arevalo, 31, and her wheelchair-bound boyfriend Garrett Greer, 31, have earned fast fame online thanks to their motivational videos, which she regularly shares with her 2.7 million Instagram followers and 191,000 subscribers on YouTube. 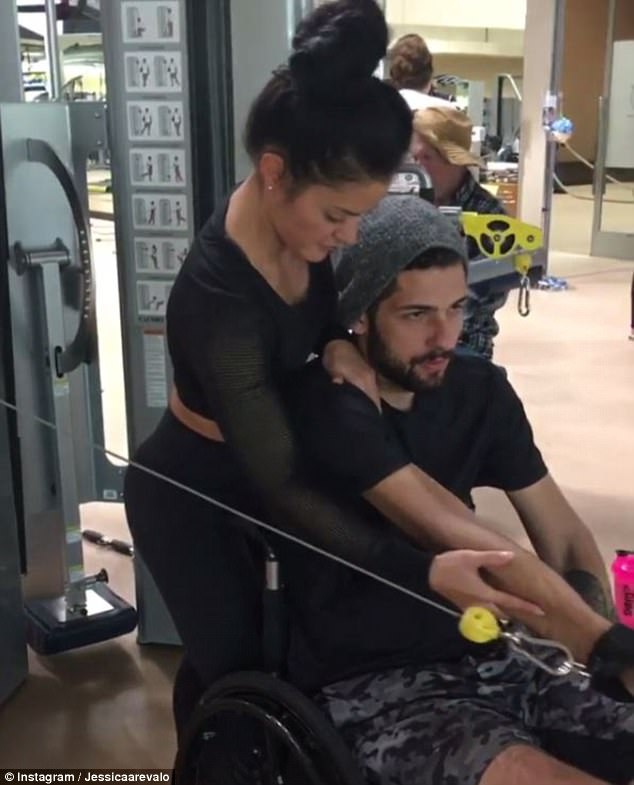 Couple goals: Their exercises are heart melting for their partner work as well as their positive impact, sometimes resulting in Garrett regaining feeling in dormant connections 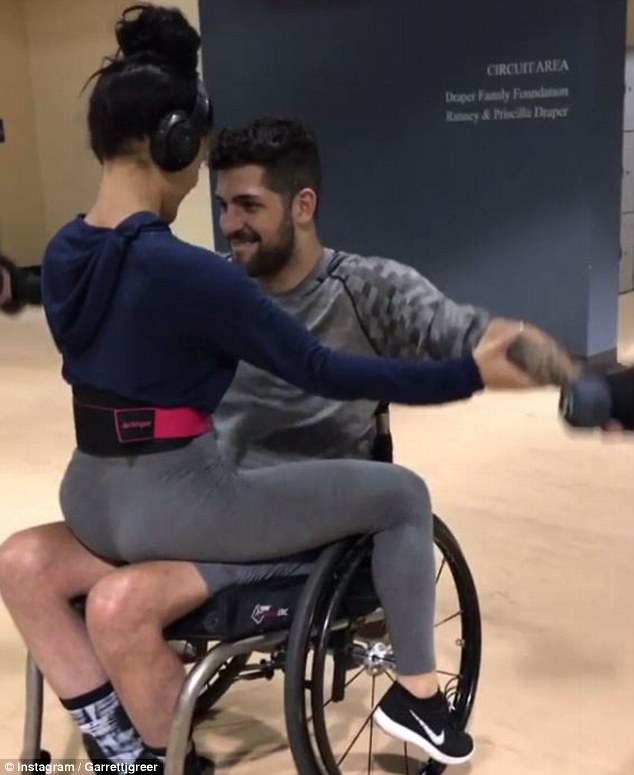 Hot in the gym! Their social media videos of their partner workouts have caught social media fire, the above video racked up as much as four million combined views

The bikini competitor and Instagram star has long been a fan of fitness, and has always had a keen interest in sharing her passion online in the hopes that it will help to bring a positive experience to others.

But when she met her boyfriend Garrett, who is paralyzed in his lower body, Jessica had no idea that her couple workouts with him would lead to such positive physical results for him – nor such an incredibly positive response from her followers.

Jessica met Garrett, a professional poker player, at a lounge in California last fall, and he soon revealed that he had broken his neck in a pool accident in 2010, an incident which caused certain areas of his body to become paralyzed.

After the duo began dating, they hit the gym together despite Garrett’s limitations and took to Instagram to share their workout routines.

‘It feels good to be doing something active,’ Garrett told Cosmopolitan about his video workouts, which see him doing all manner of tough exercises, from tossing weight balls to flexing using cable flies.

But it wasn’t until December, that the couple really realized their social media power, when an Instagram video posted by both went viral, racking up four million combined views.

The clip sees Jessica straddling her boyfriend while spotting his lateral arm raises, and she captioned the video with a gushing tribute to her partner, saying: ‘My motivation now a days is this beautiful soul.’

‘Today I showed different exercises by lightly spotting him. But I couldn’t help but to spot him from the front for lateral raises,’ she added in the video caption.

However, the couple has to be careful in the weight room. Garrett’s workouts focus on his upper back muscles and chest because he lacks abdominal lining needed for core workouts. Garrett can use his biceps and parts of his forearms but cannot move his triceps. 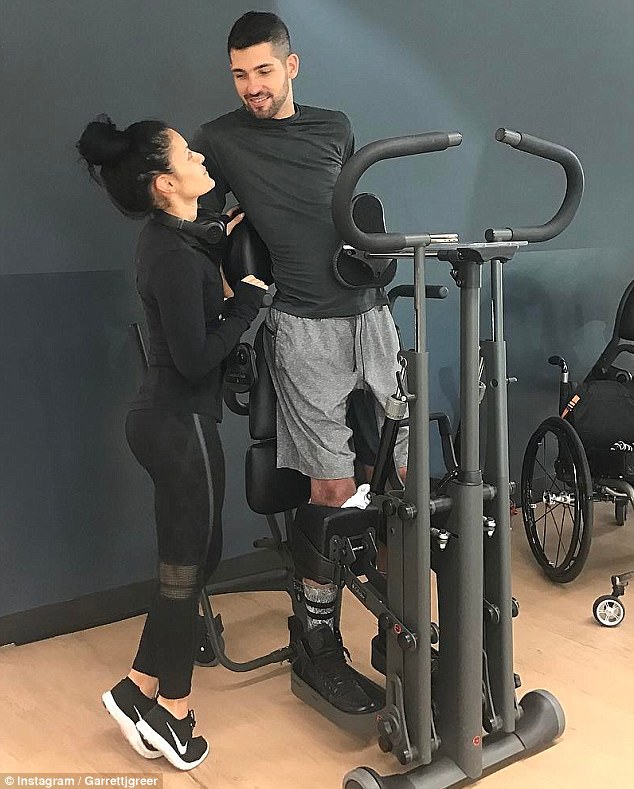 Tippy toes: Jessica shares she adores working out with Garrett, pictured above during one of his half hour standing sessions which picture him at a sauntering 6ft 3in 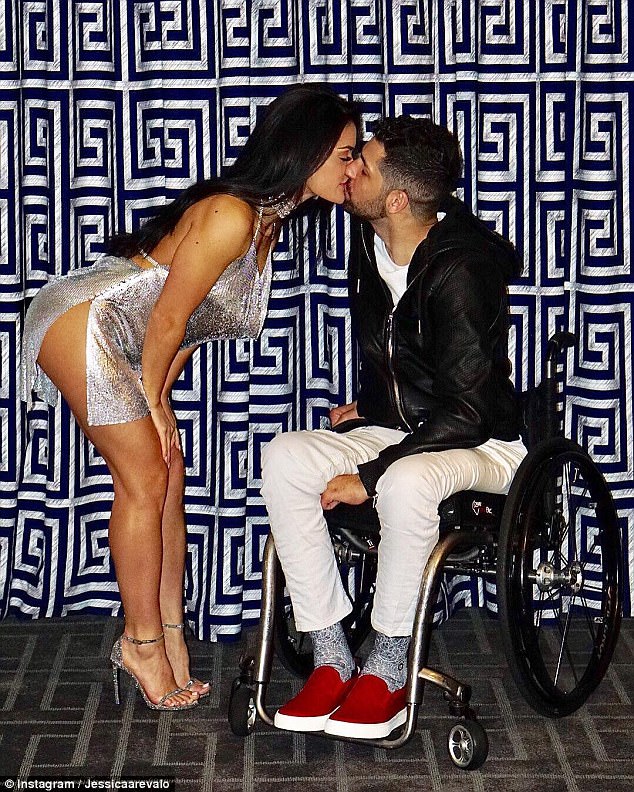 Work hard play hard: The couple share plenty of flirty flicks on their social media such as this New Year’s playful post

Despite having no dexterity in his hands, Garrett still flexes by engaging his wrists and using equipment such as grip free weights, strapped medicine balls, wrist hooks and gloves that attach to weights, to get his workout on.

And Garrett is more than proud to share his accommodating workout tech with his followers who could benefit from gear too.

In one Instagram video he is seen donning special gloves with hooks attached; he rolls up to a row machine and, using the hooks, he latches himself to the handles, since he cannot use his hands. The hooks work like his hands to pull the rowing bar back and forth.

‘These gloves with hooks @howirollsports make certain exercises so much easier for me. Not only can I hook up on my own, I don’t have to stay attached to the machine between sets,’ he captioned the video using the row exercise machine.

But what’s it like to have a girlfriend as a personal trainer?

‘It’s cool when she comes over and spots me during sets, or corrects my form,’ Garrett said to Cosmopolitan – but he’s also a fan of working out on his own as well. He shared on social media that he takes gloves that attach to weights everywhere he goes for a workout on the go.

In another fitness flick posted in November, Jessica revealed that the workouts do much more than burn calories, they’ve actually been able to help Garrett regain feeling in some muscles. The Instagram video sees Jessica strapping Garrett up to a cable workout machine to work out his chest muscles.

‘Even though I am very new to his injury and don’t know what he is capable of I did my best. He wanted to workout chest and [triceps] so I did my best to isolate the muscle groups because he doesn’t have neurological connection so the “doctors” say,’ she explained in her Instagram caption.

The experienced workout guru did her best to concentrate on individual muscles that did not have much feeling in Garrett’s chest and said she believed there was a connection that could be regained there. 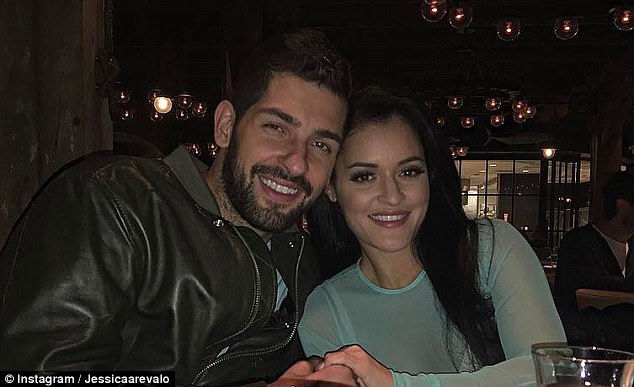 Say Cheese: The couple affectionately hold hands and will celebrate one year together this fall 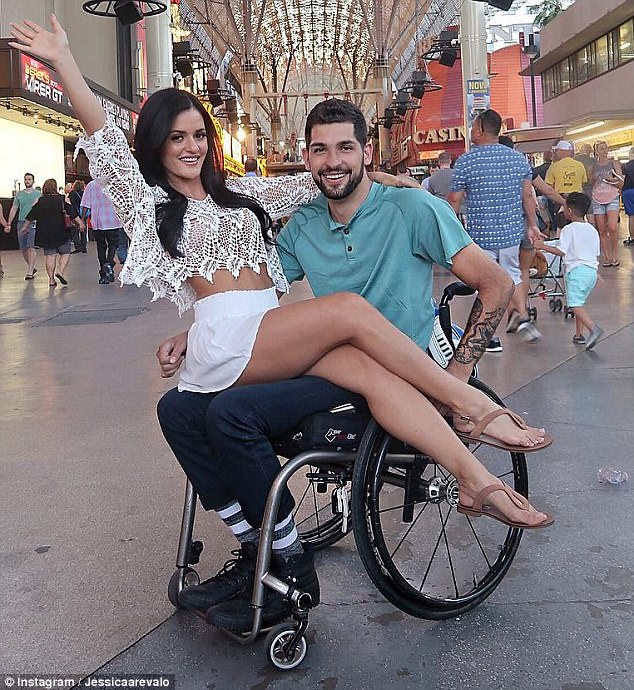 Vegas baby: The couple took to Vegas (above) for Garrett to play in a poker tournament 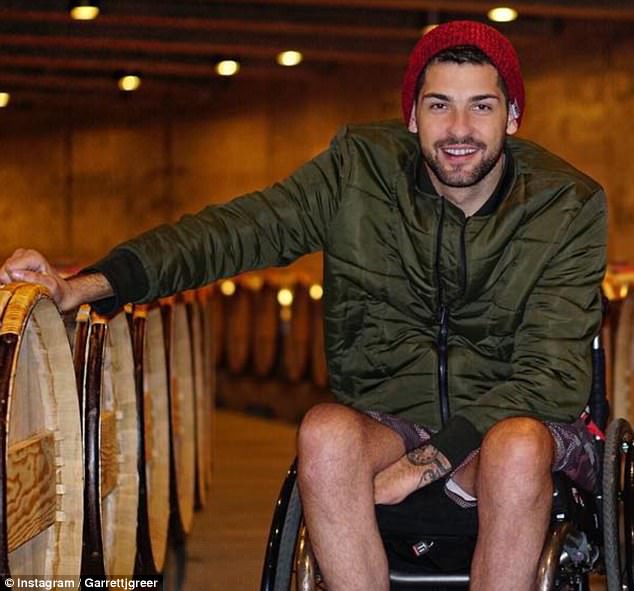 Poker face: Garrett, pictured above relaxing in Napa Valley, works as a professional poker player. The gym is his hobby and he says ‘I work on what I can do and test my limits’

As she led him through cable fly isolation chest repetitions, she encouraged him to focus on ‘muscle mind connection.’ They repeated the cable workout in the right side of his chest and tricep and sure enough the next day there was Garrett regained some feeling in those muscles.

‘I don’t care what doctors say because he was sore the next day and has been for a few days!’ she exclaimed.

Garrett is open to the exercises that proved helpful in his injury, even though doctors gave him no guarantee if he will regain full body control and feeling.

But the couple has hope in the face that exercise can stimulate nerve regeneration.

‘I work on what I can do and test my limits. You really can’t know what functionality you’ve gotten back without trying to move it,’ he said to Cosmopolitan.

Garrett practices standing upright between three and five days per week for 30 minutes a session, and when he does he stands tall at 6ft 3in.

But standing, or sitting, Jessica says she wouldn’t be parted from her boyfriend – and regularly posts gushing tributes to him on her social media.

‘I think he is absolutely perfect just the way he is,’ she wrote alongside a recent picture of the two working out.

‘I told him if he were to be able to walk again some day, that it would be too much perfection to handle.’

‘He told me if he had to pick between walking or having me in his life, “I’d choose you every time!”‘ she added.