Vehicles and homes have been destroyed by the “Camp Fire” in Paradise, California

Five people were declared dead and 150,000 evacuated Friday as fierce wildfires raged across the western US state of California, with one rapidly spreading blaze threatening the famed resort of Malibu.

The victims died in their vehicles trying to escape a massive late-season inferno in the northern California town of Paradise, where the entire population of 26,000 was ordered to leave, officials said.

“The preliminary investigation revealed that the victims were located in vehicles that were overcome by the Camp Fire,” said a statement by the Butte County Sheriff’s Department, adding that they had yet to be identified.

Dozens of other people were reported missing.

Residents who managed to escape Paradise posted harrowing videos to social media as they drove through tunnels of swirling smoke and orange flames to outrun the wildfire in the Butte County town, north of Sacramento. 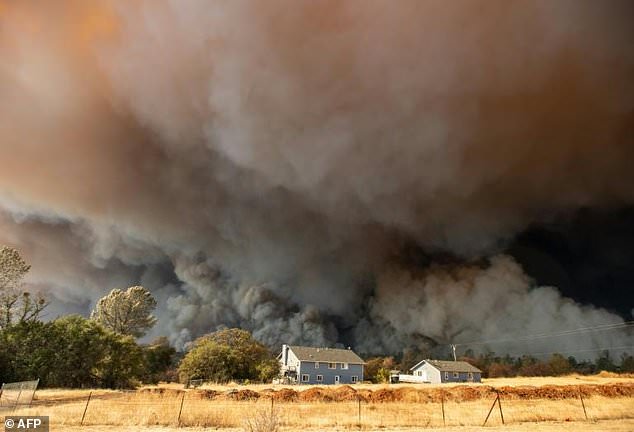 A home is overshadowed by towering smoke plumes from the “Camp Fire” in Paradise, California

The fast-moving Camp Fire has been fanned by strong winds to scorch 20,000 acres (8,093 hectares) and has not been contained, the California Fire Department (Cal Fire) said.

The flames destroyed hundreds of homes, a hospital, a gas station, several restaurants and numerous vehicles in Paradise, officials said.

An AFP photographer on the scene saw houses enveloped in flames, while others had already been reduced to ashes and cars burned to husks.

Authorities issued mandatory evacuation orders for more than 50,000 people in the scenic area in the foothills of the Sierra Nevada mountains, including some residents of Chico, population 93,000, near Paradise.

“The magnitude of destruction we have seen is really unbelievable and heartbreaking and our hearts go to everybody who has been affected by this,” said Mark Ghilarducci, the director of the California Governor’s Office of Emergency Services. 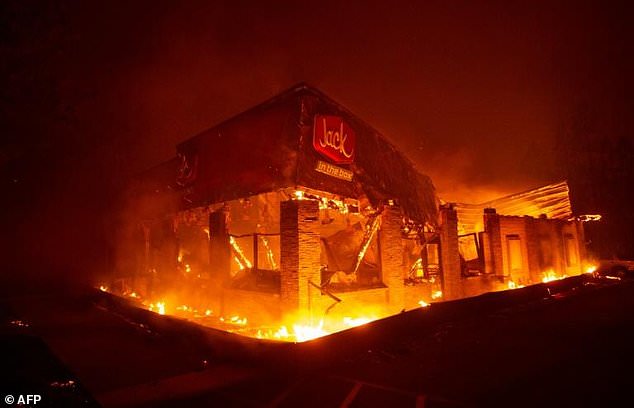 A Jack In The Box fast food restaurant burns as the Camp fire tears through Paradise, north of Sacramento, California on November 08, 2018

California Governor-elect Gavin Newsom declared a state of emergency to provide assistance to the fire-hit areas.

A Cal Fire spokesman said around 2,000 buildings were believed to have been razed in Paradise. Among those evacuated were all of the patients at the Feather River Hospital in Paradise.

More than 2,200 firefighters were battling the blaze, backed up by helicopters and water tankers.

“This was a rapidly moving fire,” Butte County Sheriff Kory Honea told the Chico Enterprise-Record. “And it moved very, very quickly from a rather remote area to populated areas.” 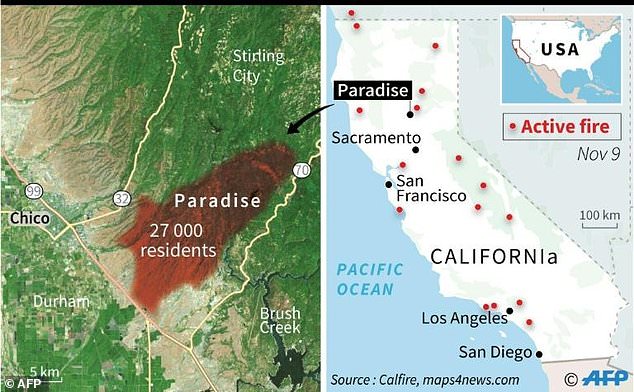 “Not one home will be left standing,” he said. “I’m devastated.”

“We’re just hoping that our brand new home that we were hoping to move into tomorrow is not burned to the ground,” Winstead said. “We’re kind of all shaking right now.”

Authorities said around 105,000 people had been evacuated in southern California.

The “Woolsey Fire,” in Ventura County sparked evacuation orders for parts of the city of Thousand Oaks, where a Marine Corps veteran shot dead 12 people in a country music bar on Wednesday night.

Some of the first responders who rushed to the scene of the second mass shooting in less than two weeks in the United States were also helping out with fire-related duties.

The Ventura County Fire Department said the blaze had burned around 8,000 acres (3,237 hectares) and evacuation orders were issued for some 88,000 homes in Ventura County and neighboring Los Angeles County. 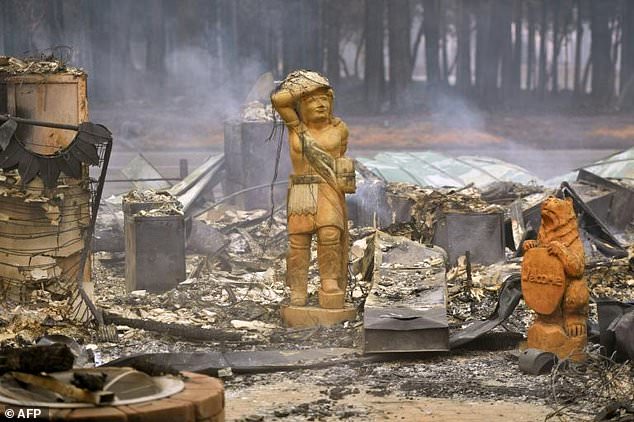 Statues on the remains of a property burned in Paradise, California, by the “Camp Fire”

“It is critical that residents pay close attention to evacuation orders,” the Los Angeles County Fire Department said on Twitter. “This is a very dangerous wind-driven fire.”

The “Woolsey Fire” has jumped Highway 101 near the town of Agoura Hills and portions of the main coastal north-south artery have been shut down, triggering mandatory evacuations, including the entire city of Malibu.

The resort is one of the most in-demand locations in California for Hollywood stars seeking privacy and luxury, and has been home to Leonardo DiCaprio, Jack Nicholson, Jennifer Aniston, Halle Berry, Charlize Theron, Brad Pitt and a host of other celebrities.

Reality TV star Kim Kardashian West, who lives just north of coastal Malibu in Calabasas, revealed on Instagram that she was forced to flee her home.

“Just landed back home and had 1 hour to pack up & evacuate our home. I pray everyone is safe,” she said.

Actress Alyssa Milano, one of Kardashian’s neighbors in Calabasas, wrote on Twitter that she was also evacuated.

“Horses are finally safe. My children are safe. My home is in jeopardy but… everything with a heartbeat is safe,” she said.

Director Guillermo del Toro revealed on Twitter that Bleak House, his museum of horror movie memorabilia was also in the path of the flames.