Three people are feared dead in Aransas County and another two are thought to have died in Houston as 130mph winds and thrashing rain lashed the region.

The Category 4 hurricane, dubbed the worst in 12 years, made landfall late on Friday, battering the coast. It has since been downgraded to a tropical storm and is making its way inland, bringing with it a torrent of heavy rain and further concern for emergency authorities who fear it will trigger some of the worst flooding on record in the state.

With another 40in of downpours on the way on Sunday, the true scale of the damage is yet to reveal itself.

Thousands have been rescued from boats, homes and vehicles after becoming trapped in flood water. President Trump commended the orchestrated response to the disaster on Sunday in an early morning tweet.

A boat yard in Rockport, Texas, after 130mph Hurricane Harvey winds swept through it on Saturday. The town is one of the worst affected by the Category 4 storm

‘Great coordination between agencies at all levels of government. Continuing rains and flash floods are being dealt with. Thousands rescued,’ he said.

But politicians in the lonestar state are already reeling from the devastation Harvey has brought and are anxiously awaiting its next phase which experts say could wreak even more havoc.

CBS Science Contributor Michio Kaku said on Sunday: ‘If it lingers over the land it could cause massive flooding.

‘Then, watch out, if it goes back into the Gulf it could get re-energized and create a second, even a third landfall. So the agony has just begun with this hurricane of the decade.’

Charles Bujan, the mayor of Port Aransas, said his town had been entirely wiped out by the hurricane. 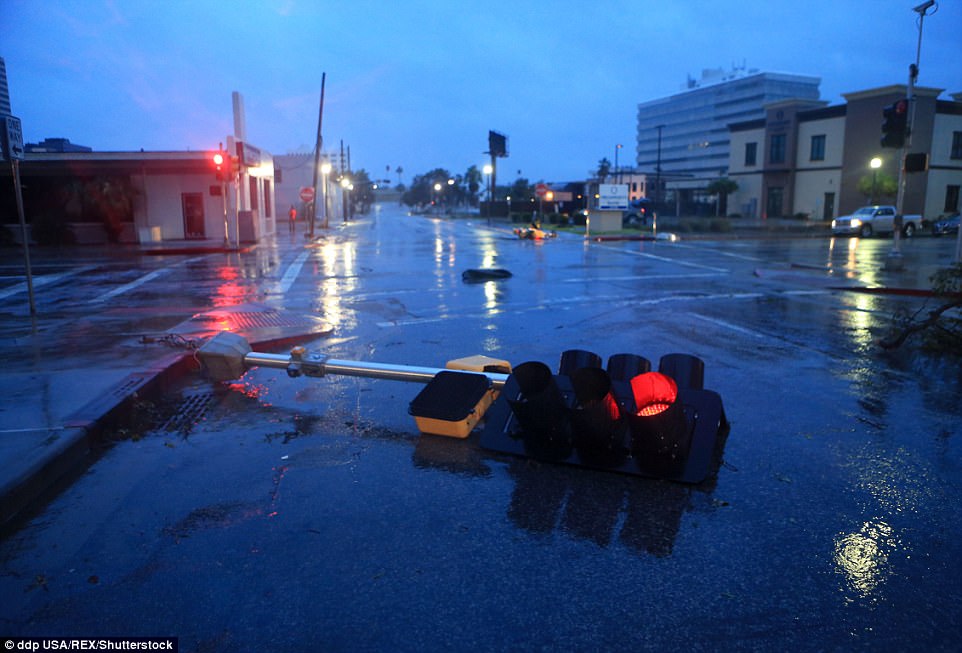 A set of traffic lights lies toppled in the middle of a soaking road in Corpus Christi, another coastal town which was struck 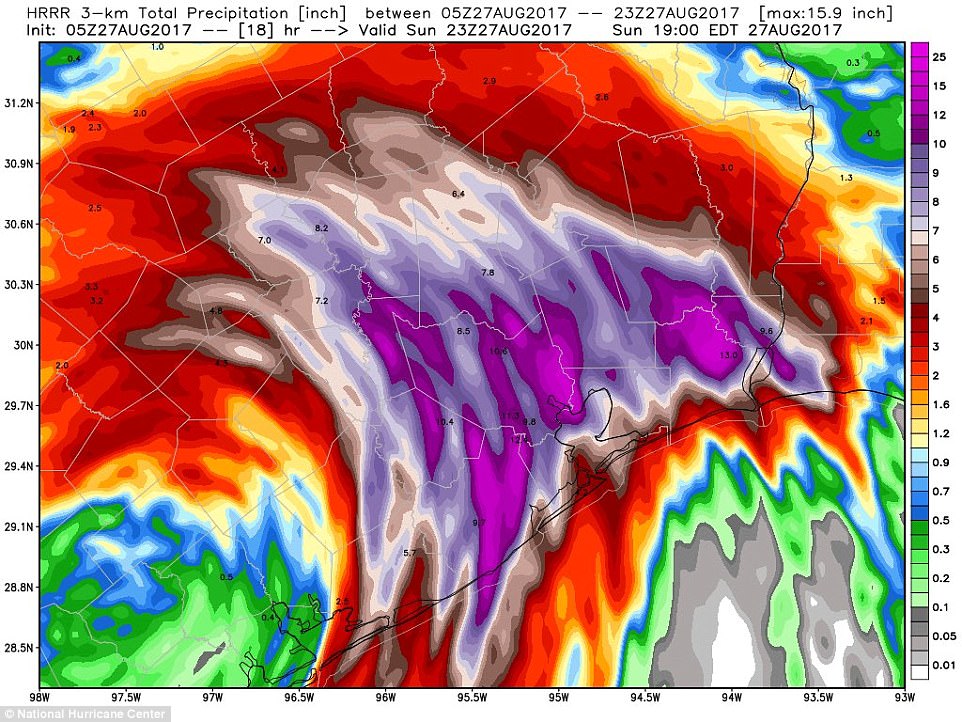 ‘To be honest with you, I’m sick to my stomach,’ he told The San Antonio Express on Saturday, describing painstakingly how one trailer park in the town had been entirely washed away.

‘It’s a 100 percent loss,’ he said of the Port Aransas’ Pioneer Trailer Park.

Huge swathes of Port Aransas are still inaccessible because of the damage. It makes it difficult for authorities to properly assess the extent of the devastation, but Bujan said he feared the worst.

‘I can tell you I have a very bad feeling and that’s about it,’ he said.

Cell phone service was entirely scrambled in Rockport, a coastal town thought to have been among the worst hit.

Residents were left in no doubt of the danger they faced by staying – the town’s mayor ominously told them to mark their arms with Sharpie pens in order for search and rescue teams to be able to later identify their corpses.

One of those killed in Houston was found dead in their car, NBC reported on Sunday. They are thought to have drowned.

Another person died in a house fire in Aransas County as they waited for emergency services to get to them. The rescuers could not get there quickly enough because of the Category 4 Hurricane, it was claimed.

The other three deaths were yet to be confirmed on Sunday but were suspected by emergency workers.

Local authorities painted a dire picture on Sunday, warning residents not to call for help unless they were immediately in danger because 911 services were overwhelmed

According to ABC, one woman’s body was seen floating in flood water in Houston on Saturday.

Some defiant residents who stayed behind in Corpus Christi, another coastal town, have not been heard from since the Category 4 hurricane made landfall on Saturday.

While the hurricane itself is over, flooding is bringing fresh concern to emergency services, particularly in Houston where more than 1,000 people have already been rescued from the rising waters.

Among the rescued were 50 children who were saved from two apartment complexes in the city. 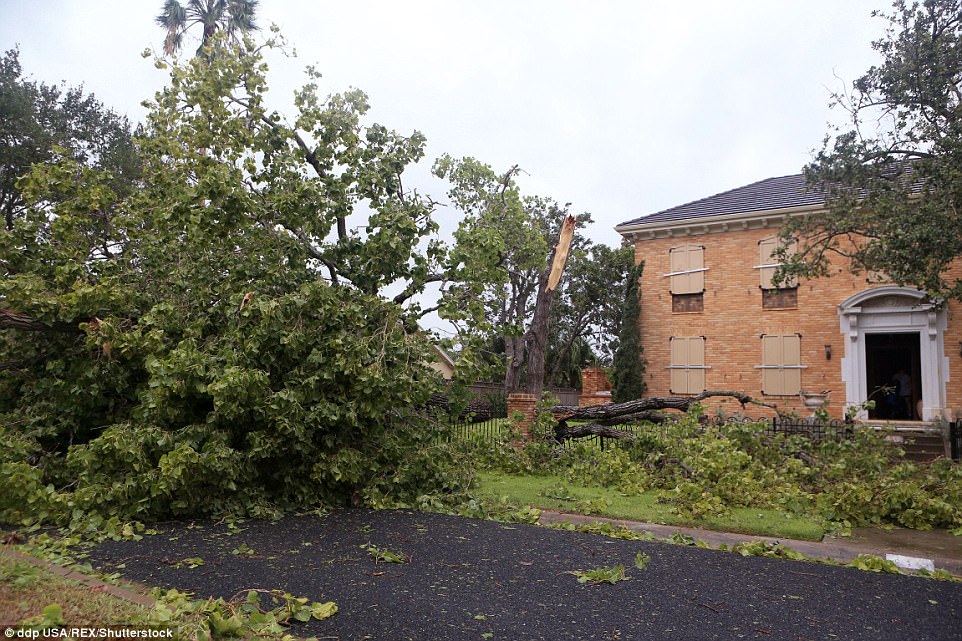 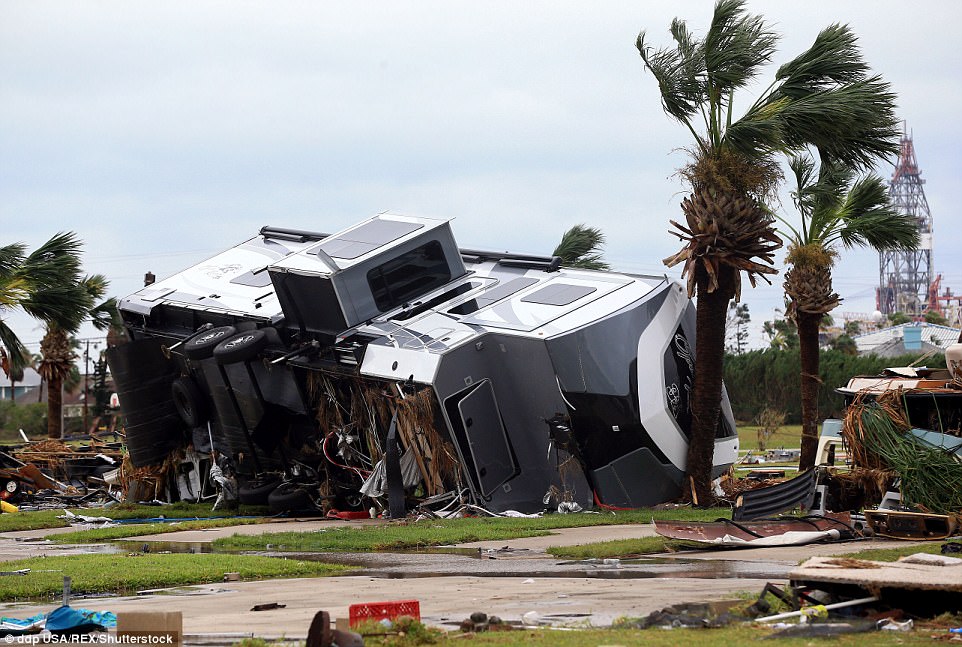 An RV in Coast Bend, Port Aransas, sits on its side after being overturned in the winds. Entire towns in the coastal community, including a trailer park, are feared to have been wiped out 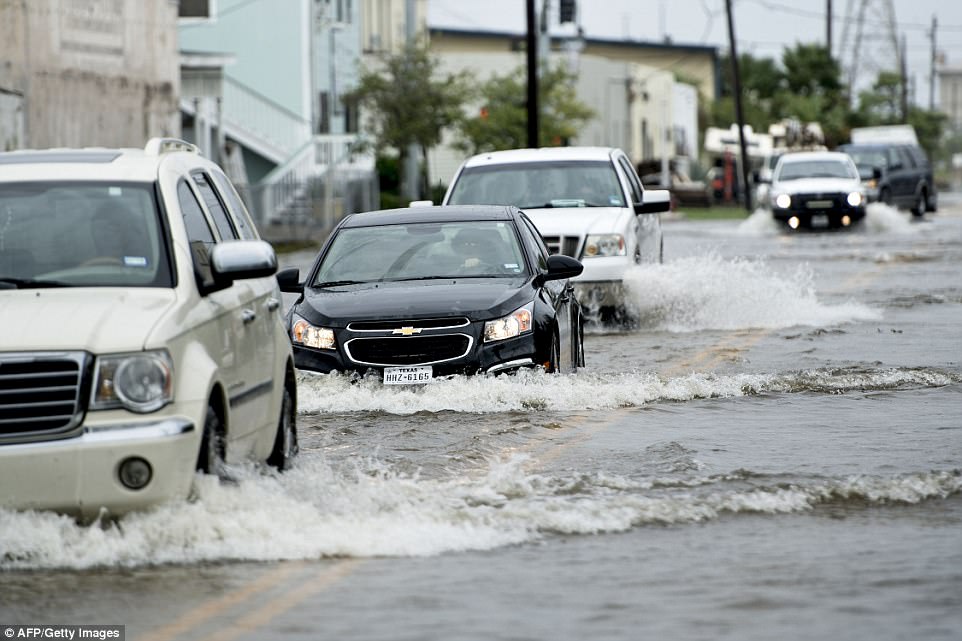 Cars power through flood water in Galveston, Texas, on Saturday. Life-threatening floods are expected on Sunday 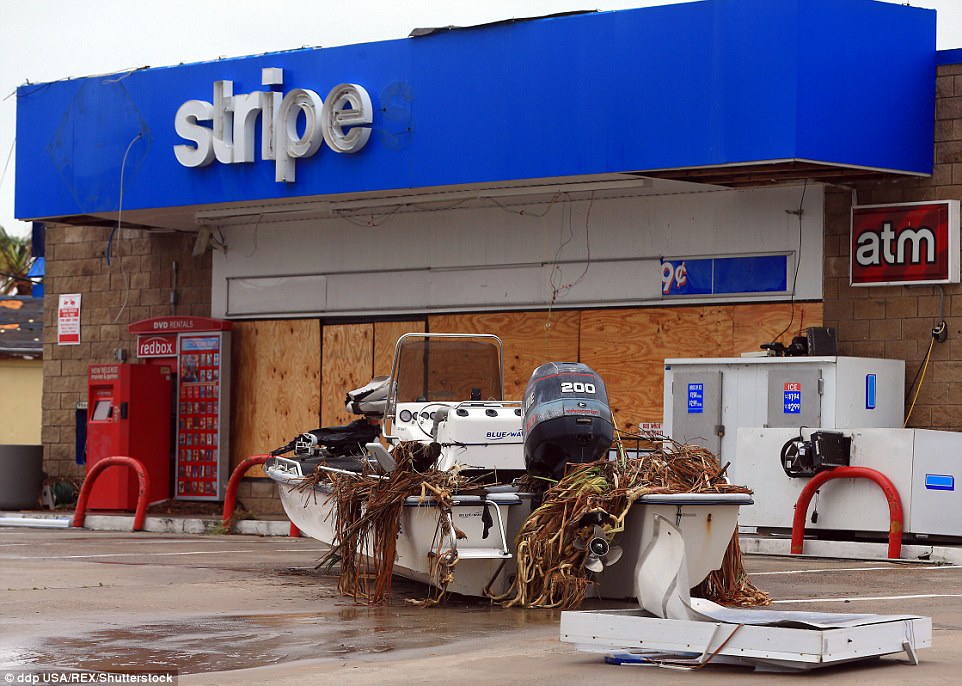 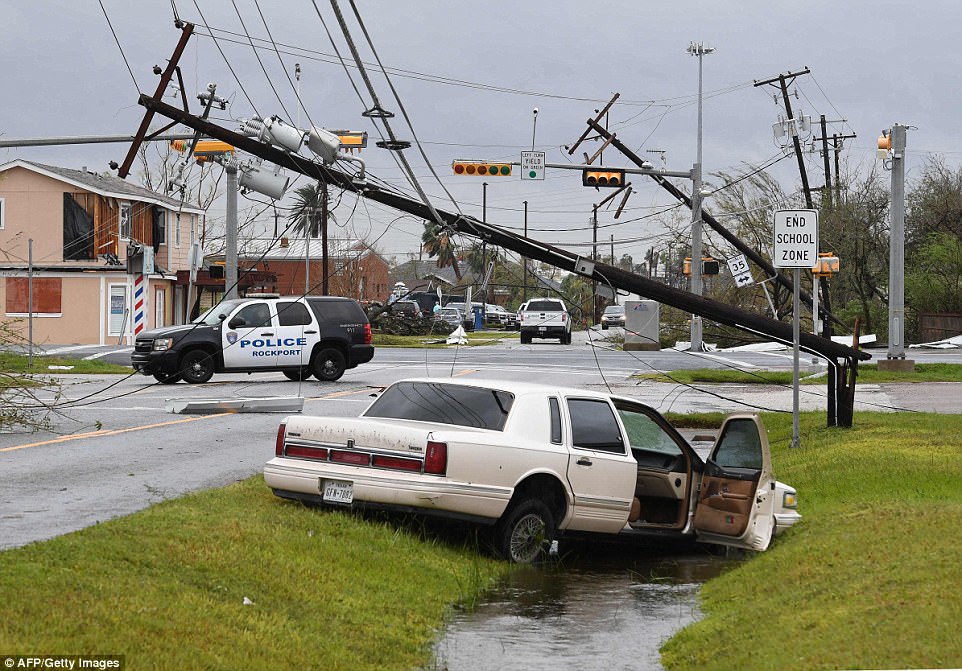 In some homes, more than 6 feet of water has poured over sandbags and makeshift barriers. Residents fled to their attics to try to escape the rising flood water, a tactic weather and safety experts strongly urged against on Sunday.

‘Calls to HCFCD of people climbing into their attics…Do NOT go into attics. Get on your roof if necessary. If calling 911, stay on the line if unanswered,’ Lindner tweeted in the early hours of Sunday morning.

The flooding in Houston is expected to go down as the worst in the region’s history, surpassing that of Tropical Storm Allison in 2001.

On Sunday, Mayor Sylvester Turner warned that 911 services were ‘at capacity’.

Harris County Sheriff’s Office told people to remain inside their homes even if they were filling up with water, tweeting: ‘Non-life-threatening water inside home is safer than going outside. Difficult & scary, but we’ll get to you. Pls shelter in place. Be safe.’ 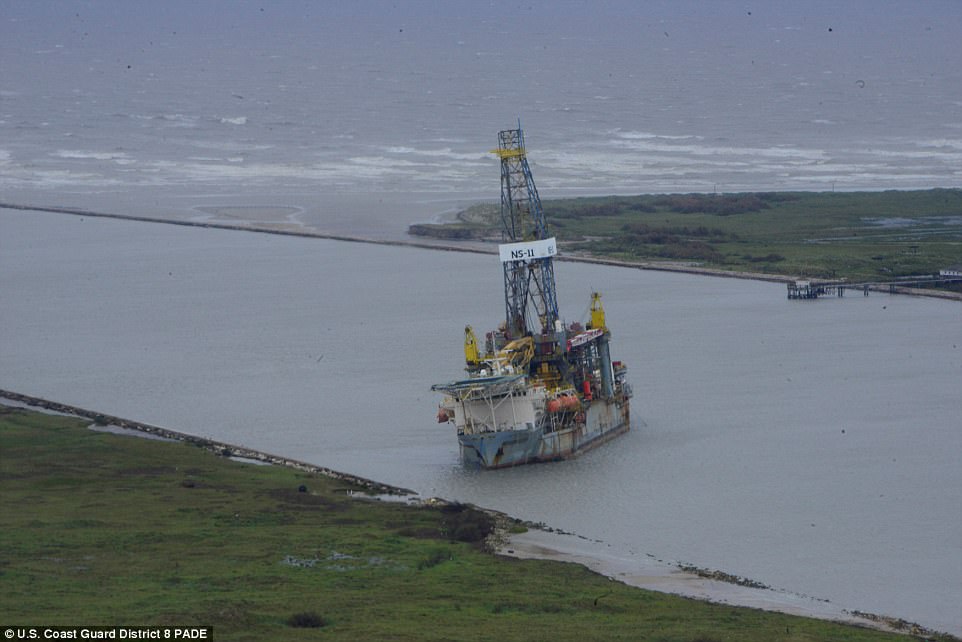 A vessel is spotted listing in a channel from a U.S. Coast Guard helicopter during an overflight after Hurricane Harvey passed the area from Port Aransas to Port O’Connor, Texas on Saturday 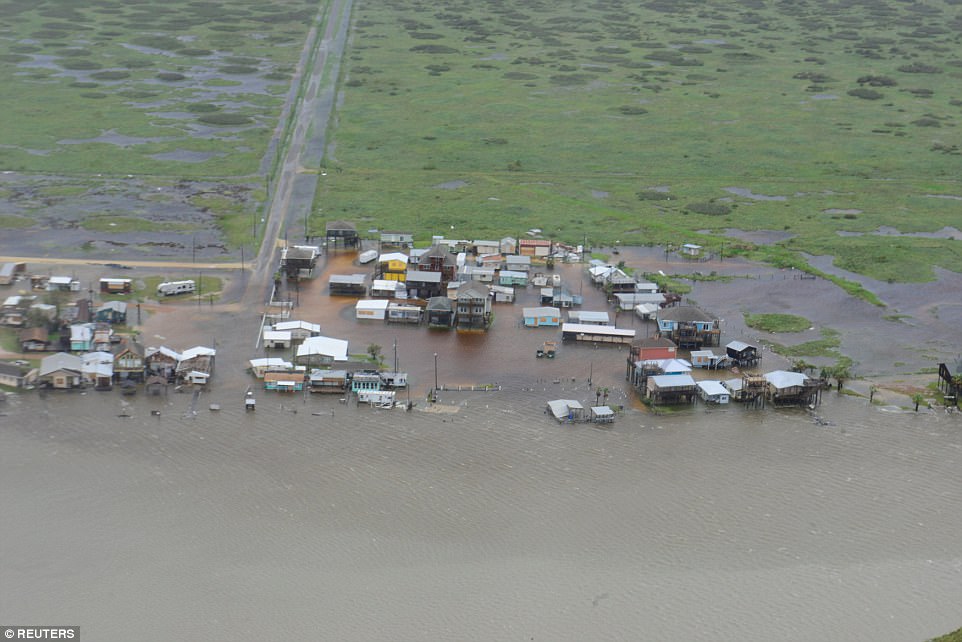 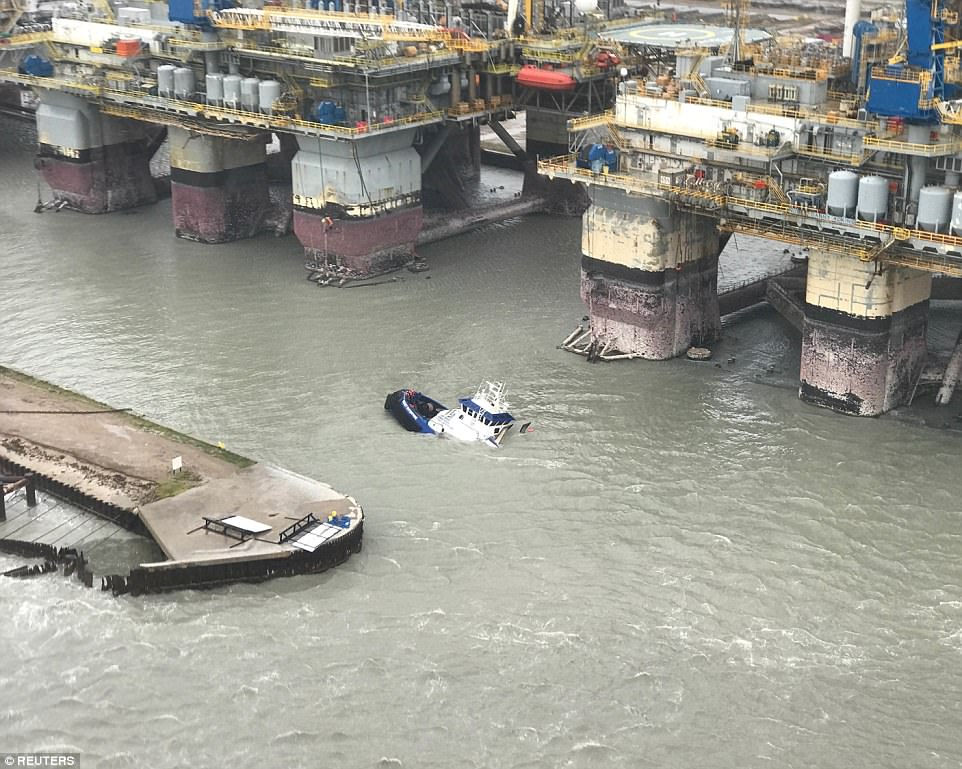 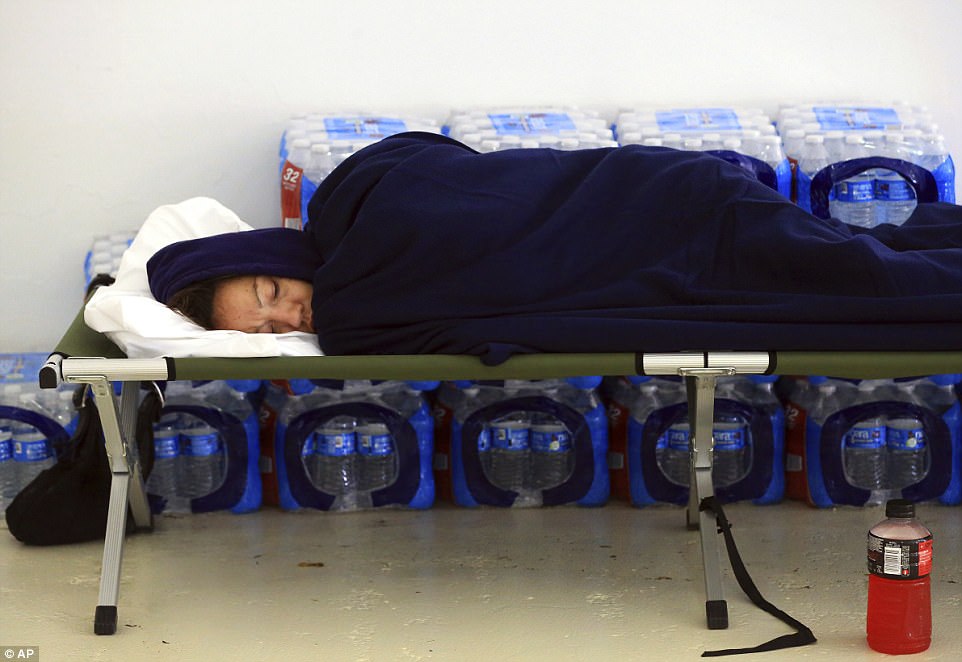 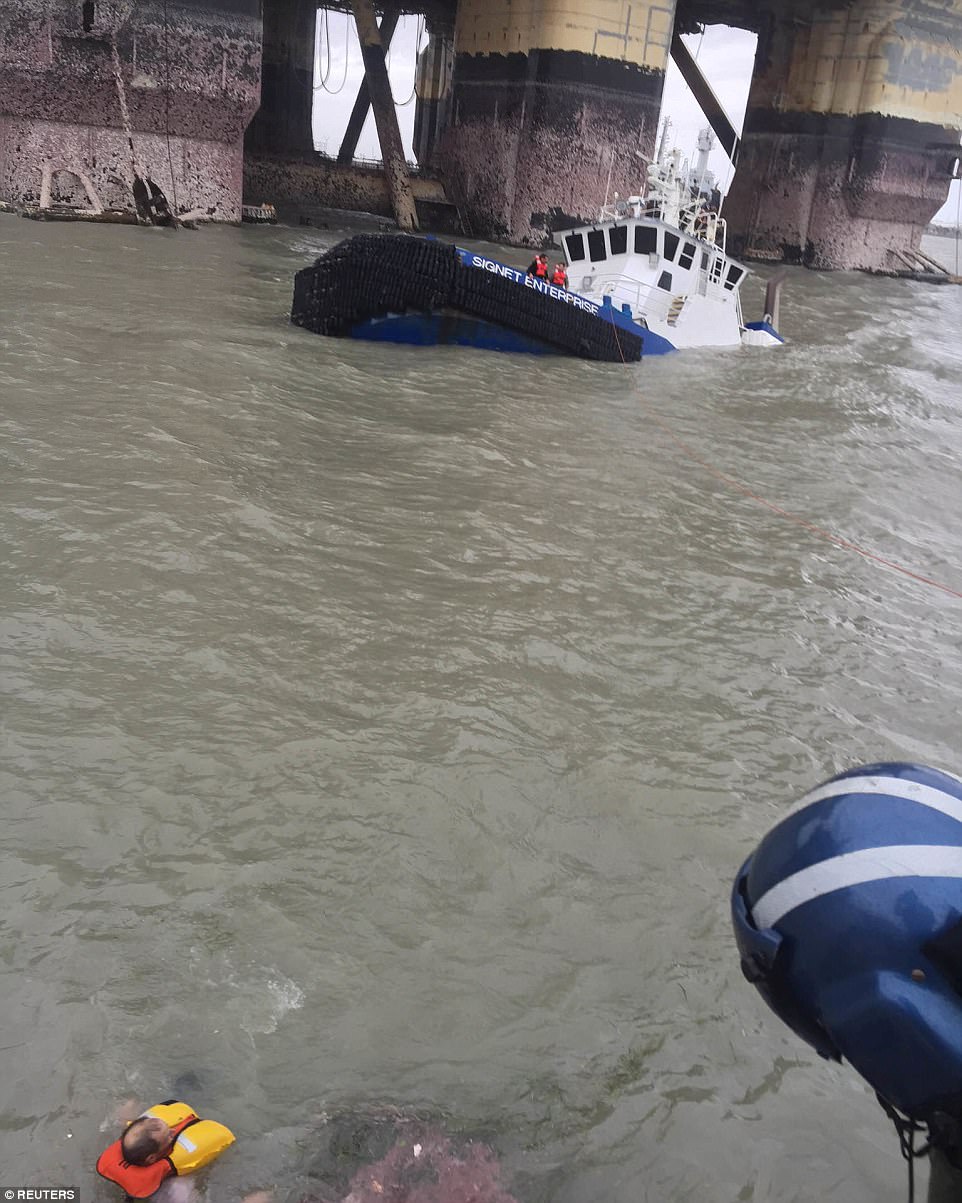 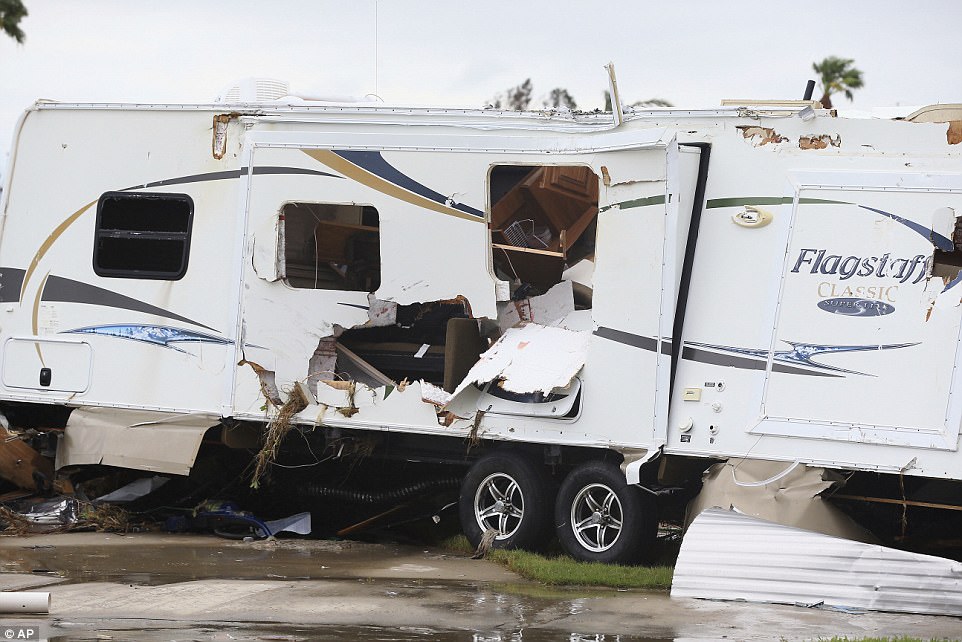 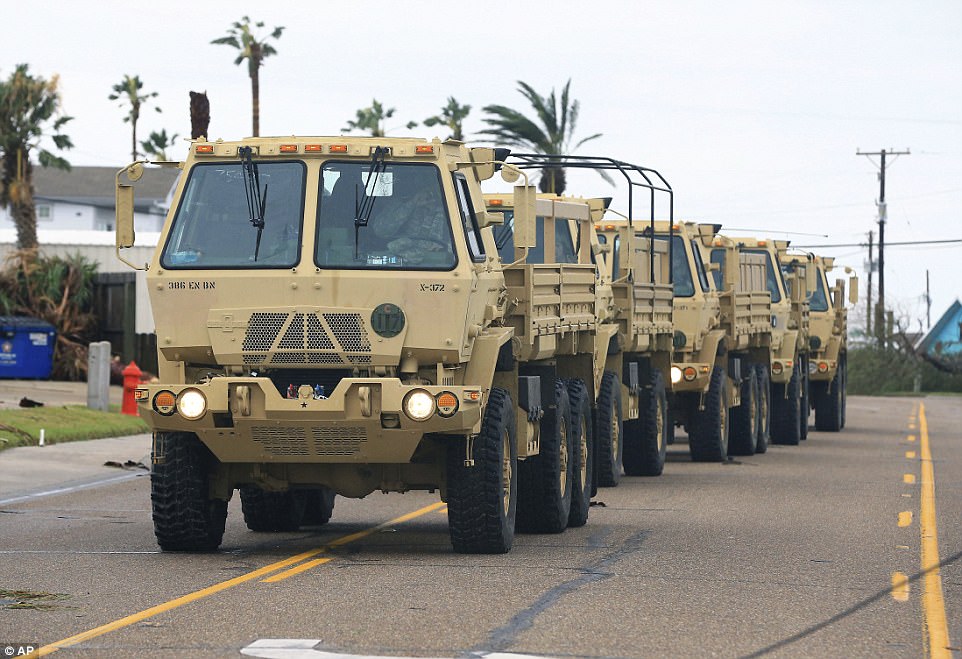 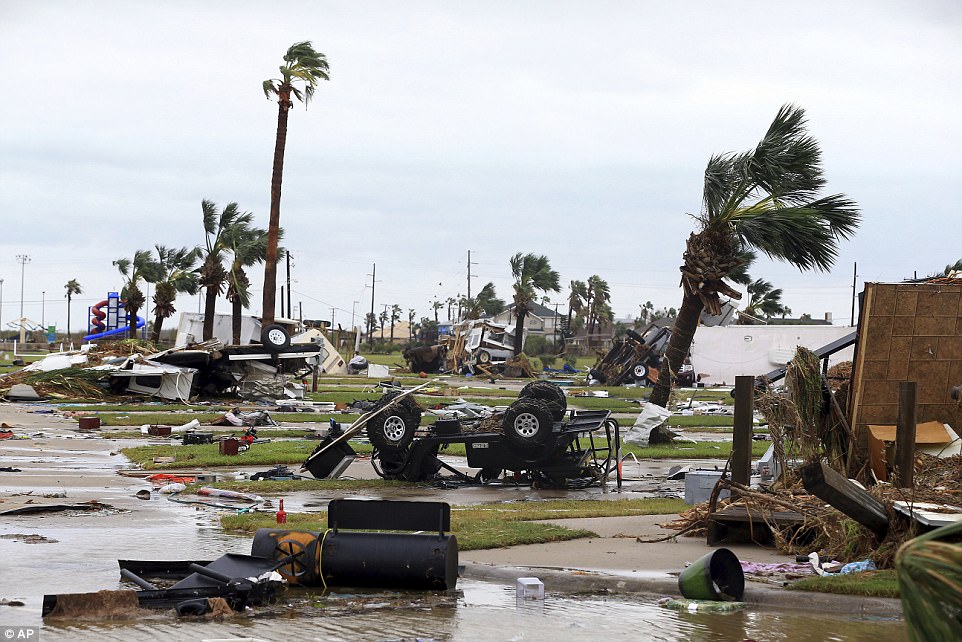 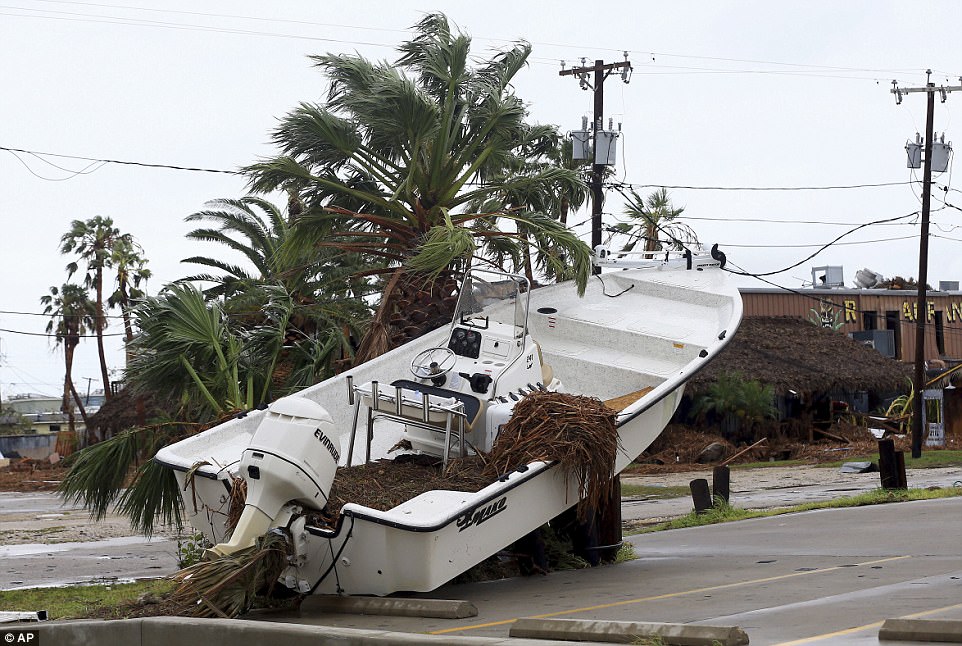 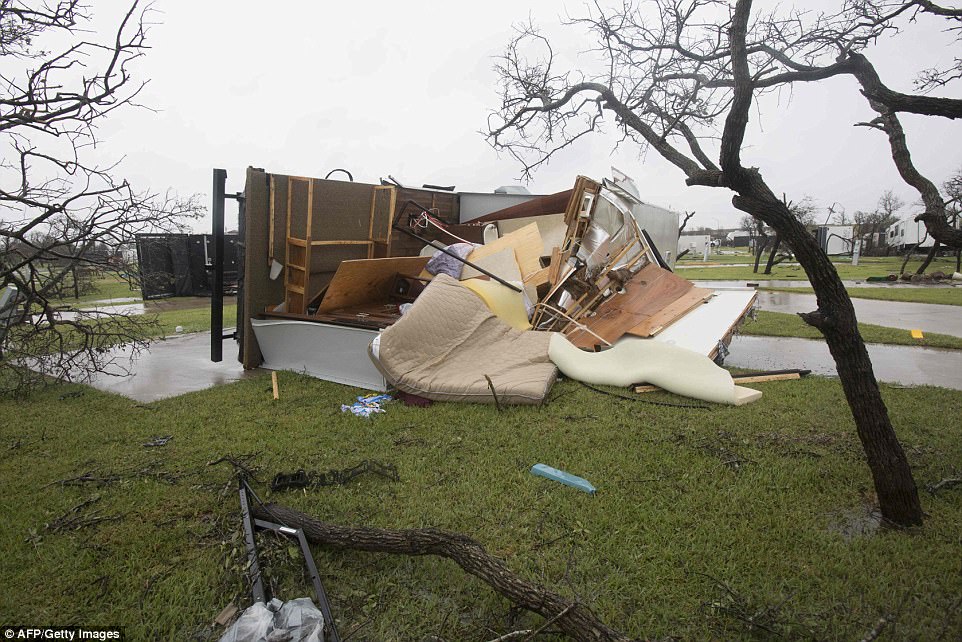 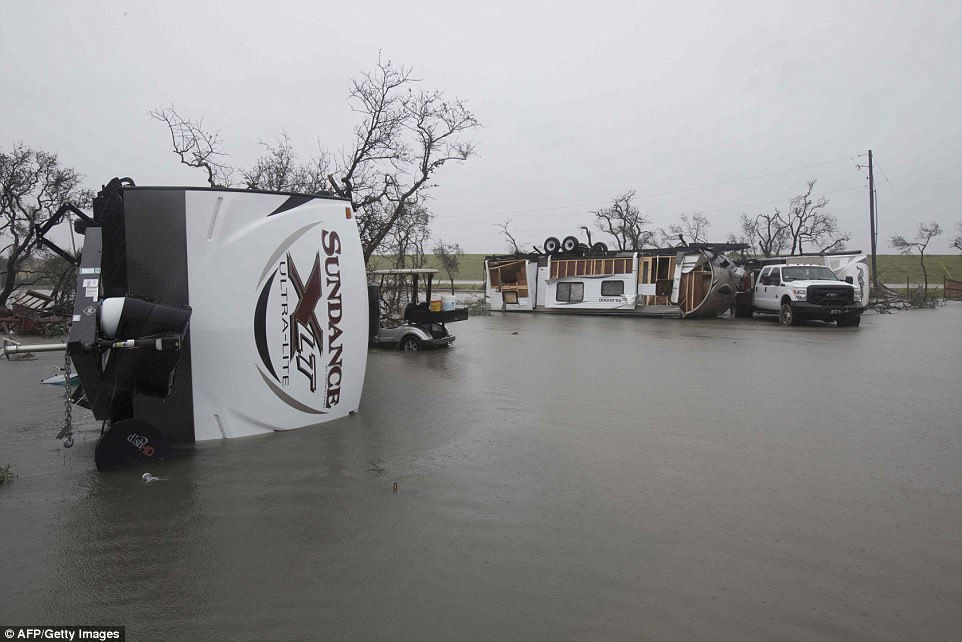 Harvey slammed into Texas, the heart of the U.S. oil and gas industry, late Friday.

It ripped off roofs, snapped trees, and triggered tornadoes and flash floods, and cut power to nearly a quarter of a million people.

It also curtailed a large portion of America’s oil and fuel production, prompting price hikes at the pumps.

Harvey has since weakened to a tropical storm, but is expected to lash Texas for days as it lumbers inland, bringing as much as 40 inches (102 cm) of rain to some areas, and affecting heavily populated.

Houston could receive as much as 2 to 3 inches of rain per hour overnight, Mayor Sylvester Turner said late on Saturday.

The National Hurricane Center described the rain forecast for the state as potentially ‘catastrophic.’

One person died in a house fire in the town of Rockport, 30 miles (48 km) north of the city of Corpus Christi, as Harvey roared ashore overnight, Mayor Charles Wax said in a news conference on Saturday, marking the first confirmed fatality from the storm.

Another dozen people in the area suffered injuries like broken bones, another official said. 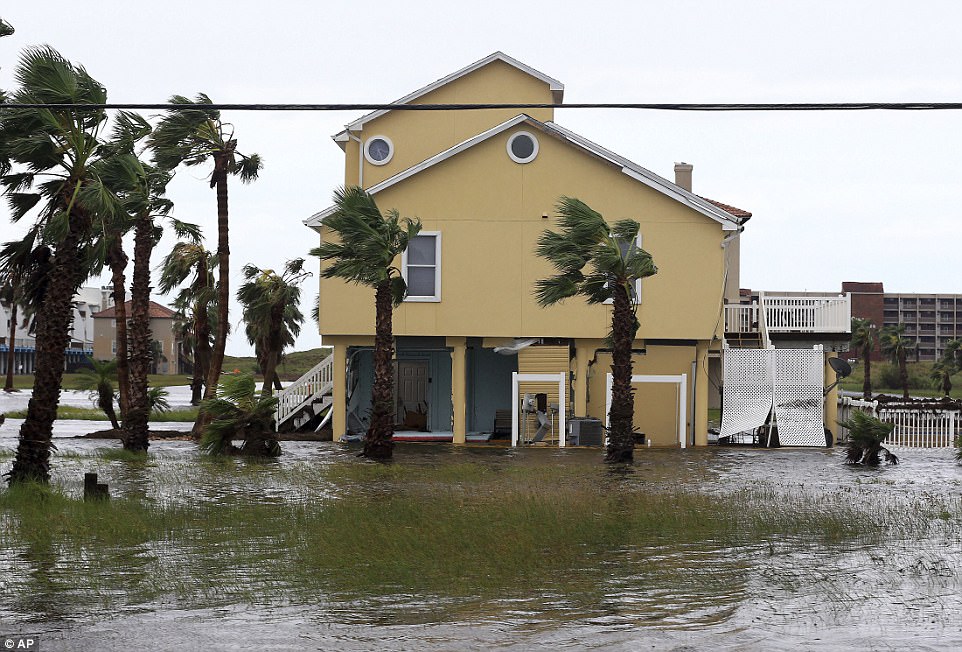 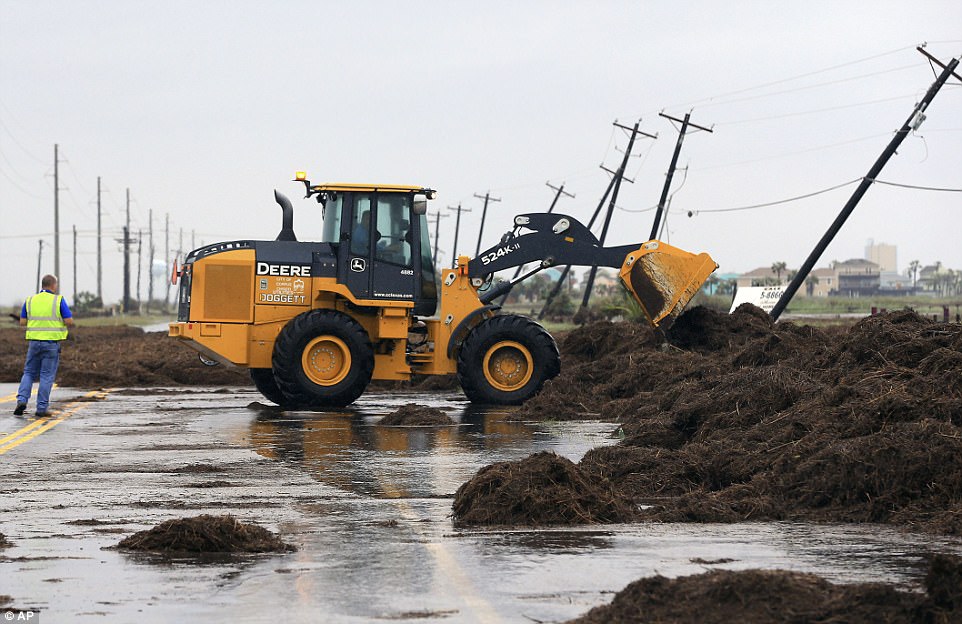 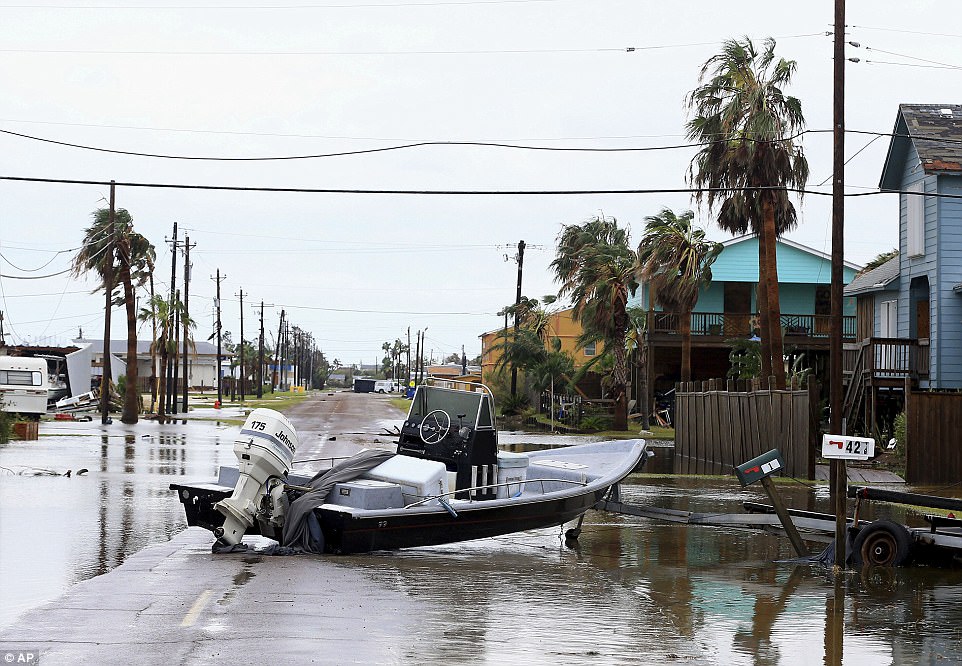 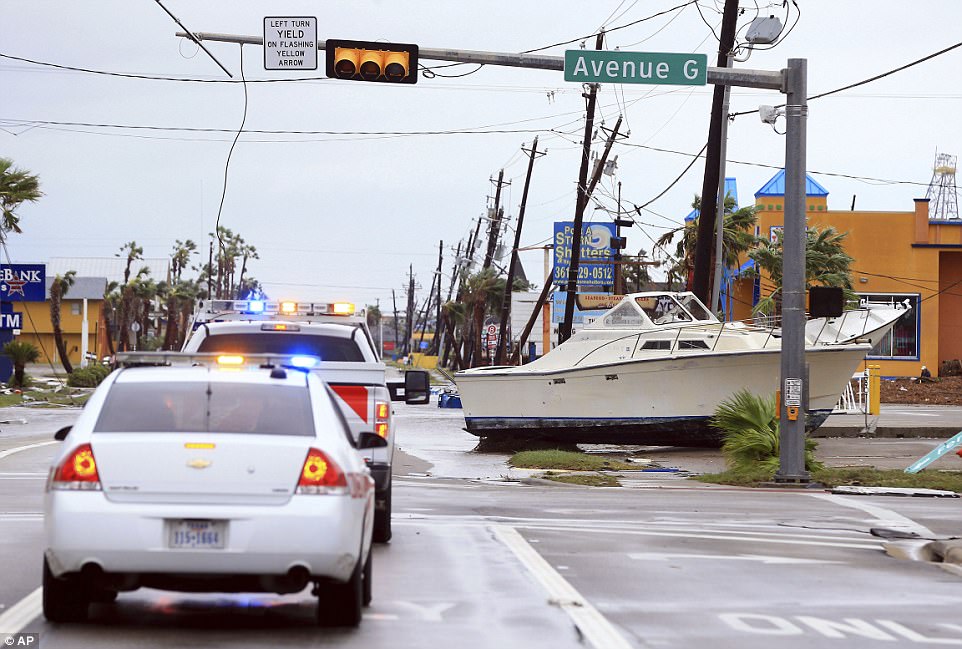 Charles Bujan, the mayor of Port Aransas, said that people are being urged to stay away until emergency crews can clean up leftover debris and wreckage 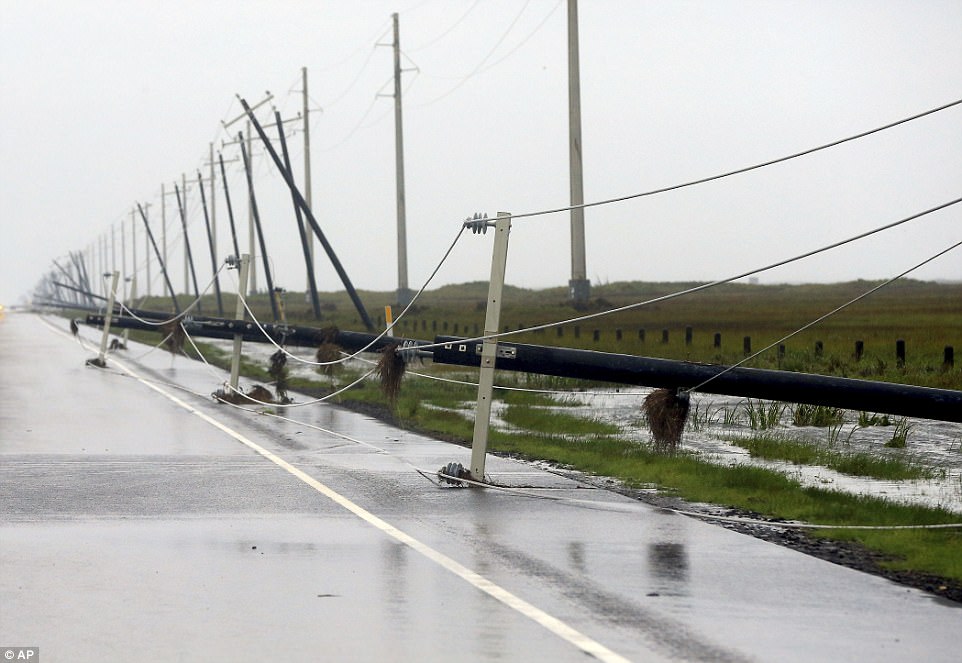 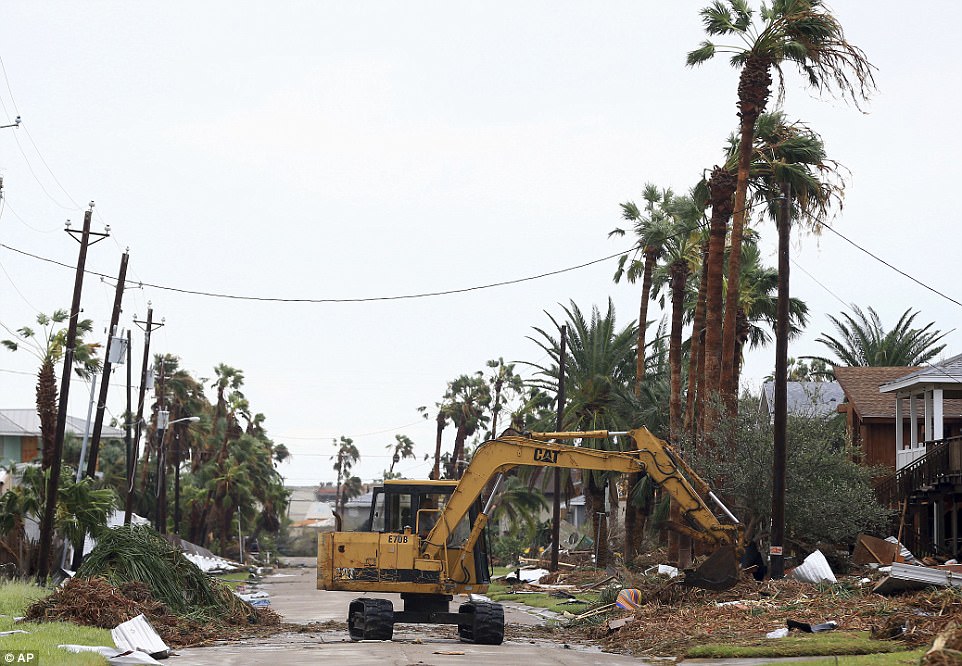 The town took a direct hit from the storm and had streets flooded and strewn with power lines and debris on Saturday afternoon.

At a recreational vehicle sales lot, a dozen vehicles were flipped over and one had been blown into the middle of the street.

By Saturday evening, a convoy of military vehicles had arrived in the Rockport area with people and equipment to help in the recovery efforts, and town officials announced an overnight curfew for residents.

The storm ripped part of the roof from his trailer home at around 4am, he said as he sat in a Jeep with windows smashed by the storm.

‘I could feel the whole house move.’

Before the storm hit, Rockport’s mayor told anyone staying behind to write their names on their arms for identification in case of death or injury.

A high school, hotel, senior housing complex and other buildings suffered structural damage, according to emergency officials and local media. Some were being used as shelters.

Texas Governor Greg Abbott on Saturday said he was activating 1,800 members of the military to help with the statewide cleanup, while 1,000 people would conduct search-and-rescue operations.