Five men have been arrested on suspicion of the murder of a football fan who was left brain damaged by an unprovoked attack in Southend in 2015 – before dying from his injuries five years later.

Simon Dobbin, from Mildenhall, Suffolk, was beaten and ‘kicked like a football’ by hooligans after going to watch Cambridge draw against Southend.

The Cambridge United supporter, who served in the RAF, suffered permanent brain damage and was left unable to walk or talk following the horrifying assault on March 21, 2015.

He died in October last year aged 48, after his story touched the nation while appearing on BBC DIY SOS and having his house adapted by presenter Nick Knowles and a team of 900 volunteers.

Detective Superintendent Stephen Jennings, of the Kent and Essex Serious Crime Directorate, said the investigation showed there was a ‘direct, causal link’ between Mr Dobbin’s injuries from the attack and his death.

He said: ‘As part of that investigation, this morning we have arrested five people on suspicion of murder.

‘We are also speaking to a number of people who we are considering as witnesses in order to gather their accounts.

Cambridge United supporter Simon Dobbin (left), from Mildenhall, Suffolk, was beaten and ‘kicked like a football’ by hooligans after going to watch Cambridge draw against Southend in an unprovoked attack in March 2015 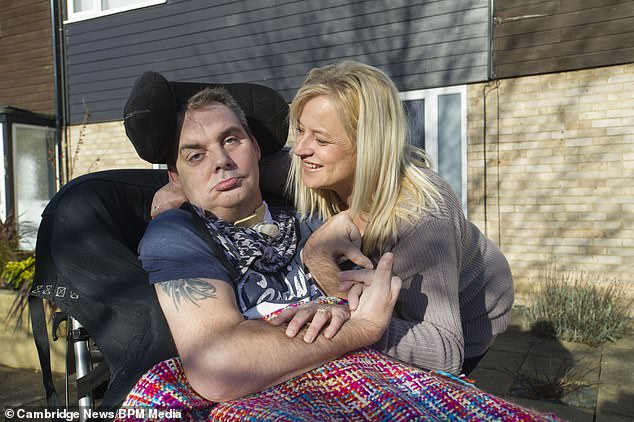 Nicole Dobbin, 50, (right) previously said she wants the men responsible for stamping on Simon Dobbin’s head to serve life in prison for their role in the savage 2015 attack after a football match in Southend, Essex 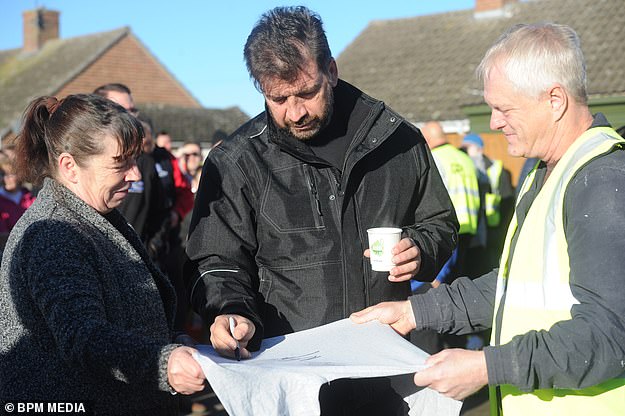 His story touched the nation after a team of 900 volunteers came forward to help with the adaptation of his home in Peterhouse Close, Mildenhall with Nick Knowles (pictured centre) on DIY SOS

‘Simon’s wife, Nicole, and their daughter, Emily, have been kept updated on our progress every step of the way.

‘Simon was a completely innocent party in the disorder that took place that day and his family have been through an unimaginable time.

‘The injuries Simon sustained that day did not just change his life, they also changed the lives of Nicole and Emily.

‘As a team, we will do everything we possibly can to secure justice for Nicole, Emily and Simon’s wider family and friends.’

Father-of-three Mr Dobbin was on his way home from watching Cambridge play Southend when rival supporters poured out of a nearby pub, The Railway Tavern, and ‘jumped’ a group of Cambridge fans in March 2015.

One witness, speaking after the attack, said the rival fans ‘just used [Mr Dobbin] like a football’, and said he was saved by a friend who laid on top of him. 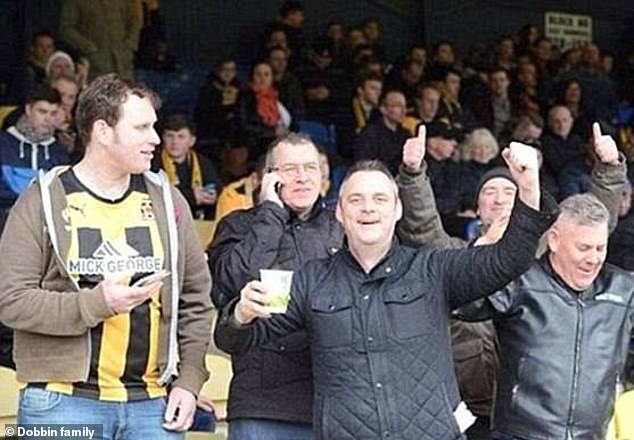 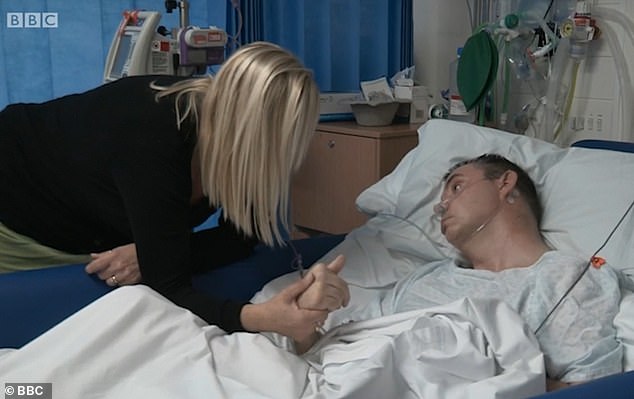 Mr Dobbin suffered brain damage, damaged hips, broken ribs and a broken nose during the onslaught on and spent more than three weeks on life support.

Just three of those found guilty were sentenced to a paltry maximum of five years behind bars, the top penalty for causing violent disorder.

One of the thugs was found with a ‘hooligan card’ on their mobile phone that read: ‘First we take your life, then we take your wife.’

Essex Police said a post-mortem examination indicated a ‘causal link’ between the attack and Mr Dobbin’s death, from complications from a brain injury.