Five migrants caught entering the UK either by lorry or container ship will be ‘passed into the care of social services’ after claiming to be children.

The males, who are now in Home Office custody, were detained by security guards yesterday after they were discovered at Killingholme port.

It is understood they were arrested after they arrived on a ship from Europe.

The migrants will now be placed into the care of social services after telling the Home Office they are minors from Sudan and Libya.

A photo shows them sat on a wall, wrapped in dark clothing, shortly after they were discovered.

The five men, who are in Home Office custody and will be placed into the care of social services, say they are children from Libya and Sudan

A spokesman for the Home Office said: ‘At about 3.20pm this afternoon (November 16) five males were encountered at Killingholme port.

‘All five, who claimed to be minors and presented themselves as Sudanese and Libyan nationals, are currently in the custody of Border Force officers.

‘They will be passed into the care of social services.

‘Their cases will be dealt with according to the immigration rules.’

The group were pictured sat on a wall on the dock estate while security officers guarded them with dogs.

It is believed the group jumped out of a van and tried to make a run for it but were pursued and detained by security officers. 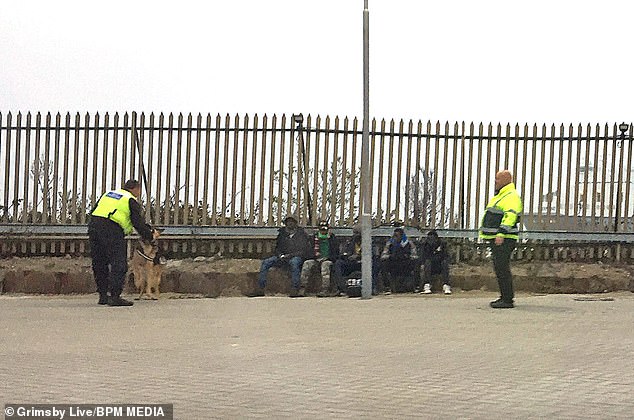 The males were detained by security guards on Friday afternoon, after they were discovered at Killingholme port

Border Force officials are now investigating how the men, who have been transported either by lorry or on a container ship, came to be within the dock complex operated by ABP.

Huge scanners are operated by Border Force at Humber Sea Terminal at North Killingholme in an attempt to find any stowaways.

The force has also had success in discovering massive hauls of drugs and counterfeit goods being illegally imported through the docks.

Drugs worth an estimated £27million were found in September, and last month a further £3million stash was found in a container of fruit juice.