Measuring someone’s pulse from their neck can predict damage in the brain which causes problems with memory and thinking skills in old age.

A British study of more than 3,000 people found those with the most intense pulse in this area were around 50 per cent more likely to suffer rapid cognitive decline over the next ten years.

A five-minute neck scan could predict dementia a decade before symptoms appear, according to research (stock image)

If the result is repeated in a larger study of more people, the neck scan could become a routine test which doctors give middle-aged people at risk of dementia.

The scan is so telling because someone’s pulse – the throbbing of arteries as the heart pumps blood through them – is ‘cushioned’ by healthy, elastic blood vessels which stop it becoming too powerful. In older people, and those with high blood pressure, the blood vessels grow stiffer and the pulse becomes too strong.

A strong pulse can travel deep into the fragile blood vessels which supply the brain, causing thinking problems and potential minor bleeds known as mini-strokes.

Researchers at University College London measured the pulse of 3,191 people with an average age of 61 using one of the large carotid arteries which supply blood to the head and neck.

This was done in minutes with an ultrasound which records the sound waves that bounce off blood vessels. Over the next 15 years the participants were monitored to keep an eye on their memory and problem-solving skills.

The quarter of people with the highest intensity pulse at the start of the study were around 50 per cent more likely to have accelerated cognitive decline. This meant falling within the 15 per cent of people with the most rapid drop in thinking abilities. 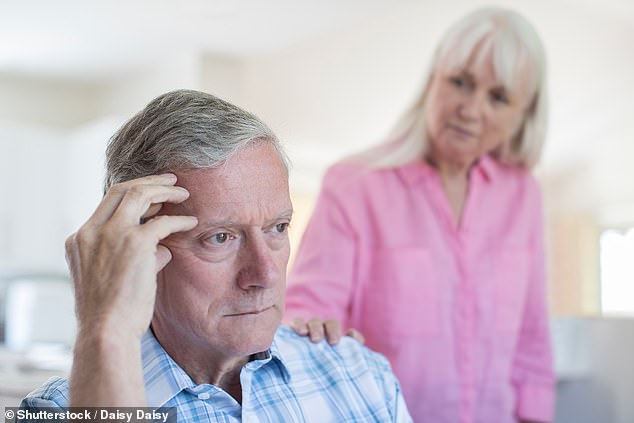 A British study of more than 3,000 people found those with the most intense pulse in their neck were around 50 per cent more likely to suffer rapid cognitive decline over the next ten years (stock image)

Cognitive decline is a noticeable reduction in memory, language, thinking and judgment skills and is often one of the first signs of dementia – although it does not always lead to the condition.

Dr Scott Chiesa, of University College London, said the findings, presented at the American Heart Association Scientific Sessions conference in Chicago, showed ‘an easily measurable and potentially treatable cause of cognitive decline in middle-aged adults which can be spotted well in advance’.

Professor Metin Avkiran, of the British Heart Foundation, which co-funded the research, said: ‘What we need now is further research – for example, to understand whether lifestyle changes and medicines that reduce pulse wave intensity also delay cognitive decline.’