Five-year fixed mortgage rates have plummeted over recent months and are now almost as cheap as two-year deals, prompting many borrowers to consider locking in for longer.

Taking a five-year deal may not impact on your monthly outgoings too much but it could save you considerable interest in the longer term, particularly if interest rates rise over the next two to five years – something the Bank of England has warned is likely.

But there’s a catch – if you need to change your mortgage, borrow more or you move house before the end of the term, there could be expensive early repayment charges.

The gap between two and five year fixes is just 0.36 per cent, the narrowest margin since 2012

Two-year fixes have plateaued in price over the past few months, following a prolonged period of falling rates thanks to fierce competition among lenders.

But longer-term fixes have continued to fall, narrowing the gap between two and five-year deals to just 0.36 per cent, the smallest margin since January 2012, according to the financial information website.

Darren Cook, finance expert at Moneyfacts, said: ‘It seems that the intense competition within the two-year fixed rate sector is also appearing in the five-year fixed rate market.

‘Currently, mortgage rates appear to be competitive across the board, allowing borrowers the flexibility to choose whether to fix repayments for either the short, medium or longer-term initial rate periods.

‘However, borrowers must also remember to consider other factors, such as potentially greater fee expenses if they opt for a shorter initial fixed payment term and have to switch deals more frequently.’

Should you fix for longer?

As the price margin between the two types of deal shrinks, so too does the difference in monthly repayments.

Traditionally, borrowers have opted for a two-year fixes  as they are cheaper than longer term deals, meaning a smaller outlay each month.

But the difference is not as great as it once was. For example, a £200,000 mortgage taken over 25 years on the average two-year fixed rate would result in monthly repayments of £896.23.

But it doesn’t stop there – the same mortgage on the average 10-year fixed rate would result in average monthly repayment so £948.42 – just £15.53 per month more than the five year fixed-rate deal. 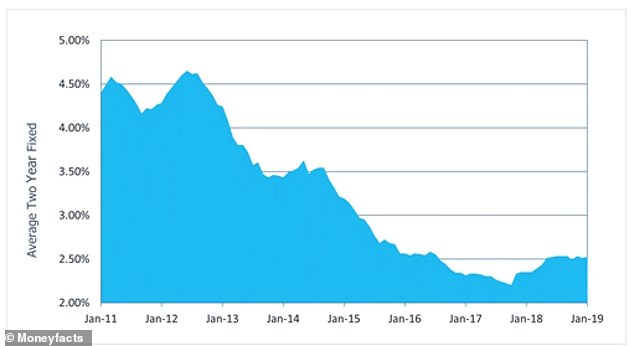 The average two-year fix has plateaued, while five and 10-year fixes have continued to drop

What do I need to watch out for?

A 10-year fix sounds like a great idea if you know exactly how your life is going to pan out over the next decade – but very few of us do, and so the extra security a 10-year deal brings is a trade-off against how flexible you want to be in the future.

The same can be said for a five-year deal, albeit to a lesser extent.

If you find a deal you like the look of, read the small print to see what early repayment charges you may be liable for.

You should be able to take a good fixed mortgage with you if you move, as most are portable. This means you can take your existing rate and terms to a new property.

However, be careful to check how this would work in practice, as many people need to borrow more when they move house, usually to a bigger, more expensive home.

Another thing to check is the fee – lenders sneaked up product fees following the Bank of England’s base rate rise last year, so use This is Money’s true cost mortgage calculator to find out how much you’ll actually be paying each month for each deal.

For example, Atom Bank’s 95 per cent two-year fix is is at 2.84 per cent with no fee while Nottingham Building Society’s’s same offering is slightly lower at 2.80 per cent with a £999 fee.

To find the best rates for yourself, you can use This is Money and L&C’s mortgage finder tool.