A five-year-old boy believed to be an Afghan refugee has fallen 70 feet to his death from a hotel window in Sheffield.

South Yorkshire Police are appealing for information following the boy’s death at the Sheffield OYO Metropolitan Hotel in Blonk Street at about 2.30pm yesterday.

It is believed the boy had been staying at the hotel with his mother since arriving in the UK from Afghanistan.

Inspectors could be seen opening hotel windows revealing that some left a 1ft 6in gap, which a child could easily climb though.

Emergency services were called to the OYO Sheffield Metropolitan Hotel on Blonk Street in Sheffield, South Yorkshire, at around 2.30pm yesterday (scene pictured above)

The OYO hotel is temporary home to several Afghan families.

One resident Qahar Haqjo, 32, served as an interpreter with the British Army in Afghanistan for two years, and arrived in the UK with his family on 27 July.

He said: ‘The boy is from Afghanistan. His father was not inside but he was living with his mother.

‘It happened at around 2pm and he fell from the ninth floor at the back of the hotel. He can’t have been in England very many weeks.

‘We spent two weeks in quarantine in Manchester and moved into this hotel five days ago.’ 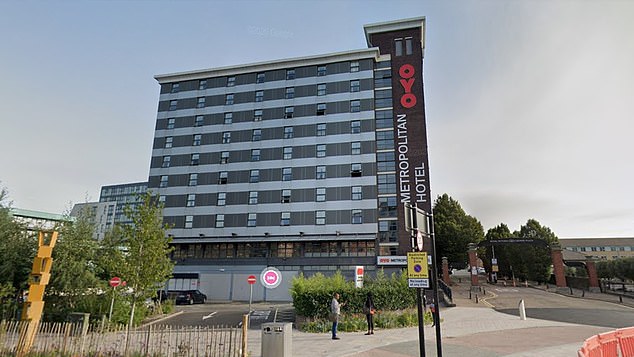 It is believed the boy fell about 70ft from the top floor window into an NCP car park.

Sheffield City Council health and safety officers were last night seen inspecting the several more hotel windows which they were able to open leaving a 1ft 6in gap at the bottom when they pivot open.

Police vehicles were still in situ and security guards in hi viz jackets were turning people away at the main entrance and patrolling the stairwell today.

The boy’s family are being supported by specially trained officers.

No formal identification has taken place yet.

Officers are appealing for anyone with information to come forward. Any witnesses, or anyone who has information, should call 101.