‘It’s a rite of passage’: Mum of five-year-old Cook Islands boy whose school has ordered her to cut his hair speaks out and vows not trim his locks for TWO YEARS

A mum who is fighting with her five-year-old’s school about his hair has vowed she won’t trim his locks for two years because it’s part of his Cook Islands culture.

Wendy Taniela says Australian Christian College Moreton, in south-east Queensland, told her she needed to cut her son Cyrus’ hair during his first week of prep.

The family has been planning a traditional haircutting ceremony on the boy’s seventh birthday for years, and planned to invite 100 family members.

Speaking to Sunrise on Wednesday morning, Ms Taniela explained it was tradition for Cook Islands boys to grow their hair before transitioning towards manhood.

‘I think that people tend or fail to understand this. It is a cultural, it is a haircutting tradition,’ she told the program.

‘It’s a Cook Island male’s right of passage ceremony, which transitions a boy to a man.’

‘We’ve tried to conform to the school uniform by doing his hair above the collar neat and tidy, but they’ve advised us that we’ll still need to cut it,’ she said.

Ms Taniela confirmed she would chop Cyrus’ hair for his seventh birthday, as part of his haircut ceremony.

In Cook Island culture, cutting a boy’s hair for the first time is a rite of passage, although there is no set age for the ceremony.

Australian Christian College Moreton said principal Gary Underwood has spent time in the Cook Islands and ‘is an enthusiastic supporter of Islander people and their customs.’

In a statement on its Facebook page, the school also said: ‘Respecting the College’s policies, procedures and guidelines allows the College to be consistent across its many cultural groups.’

Mr Underwood said all students have to follow school policy, which requires that all boys’ hair is neat, tidy and not hanging over their faces.

‘Extreme styles’ such as ponytails and buns, like Cyrus wears, are not permitted.

The decision could open the school up to a complaint to the Queensland Human Rights Commission.

A complaint is something Cook Islands Council of Queensland president Archie Atiau says he would support. 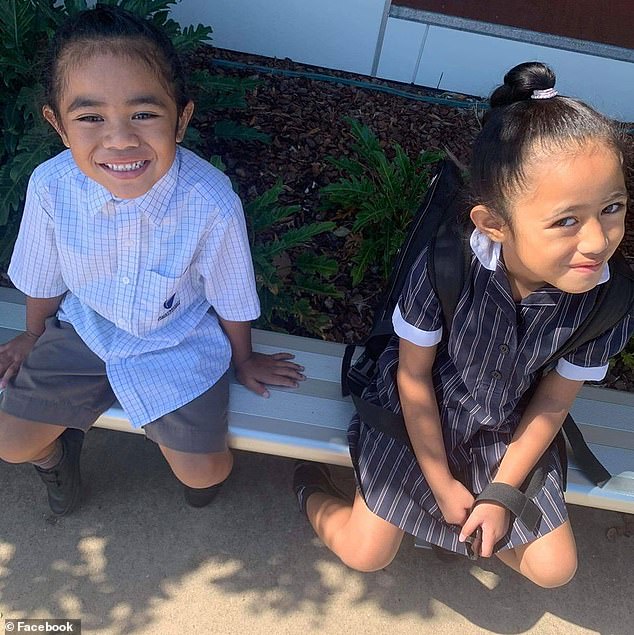 Mr Underwood said all students have to follow school policy, which requires that all boys’ hair is neat, tidy and not hanging over their faces. Pictured: Cyrus and his sister

Mr Atiau says he is also concerned about the boy’s mental health.

‘Not only now, but the long-term effects if he gets to adulthood and realises that he didn’t get the opportunity (to have the ceremony),’ Mr Atiau said.

‘The family should make the decision as to when his hair is cut.’

Ms Taniela says the family have been planning a traditional haircutting ceremony on the boy’s seventh birthday for years.

She said it would be a big cost to bring forward the ceremony planned to be held in Sydney and attended by more than 100 family members.

‘But this is a big cost, and we have other family commitments. We don’t all drive BMWs.’

Cyrus’s father Jason wanted to continue the haircutting tradition because it meant so much to him, Ms Taniela told the news outlet.