Amid a ferocious electrical storm in Sarajevo, Neil Lennon’s second permanent spell as Celtic manager looked in danger of starting under a cloud.

A goal down to the Bosnian champions, the atmosphere in the Asim Ferhatovic Hase Stadium was highly charged as the dangerous-looking hosts sensed a Champions League shock was on the cards.

But a stunning thunderbolt strike from Mikey Johnston ten minutes before half-time — from fully 30 yards — was the moment this first-round qualifier was turned on its head.

The youngster’s goal was a real high-quality moment to savour as he sent the ball flying high past goalkeeper Vladan Kovacevic and ripping into his net.

The Scots had looked edgy at times early on but, with home optimism punctured, Odsonne Edouard and Scott Sinclair plundered second-half goals to secure a fine victory ahead of next Wednesday’s second leg at Parkhead.

This was Celtic’s first-ever trip to Bosnia and Herzegovina and the 350 fans who travelled to the Balkans faced a truly poignant walk up to the stadium.

Eight years after it hosted the 1984 Winter Olympics opening ceremony, the arena became a makeshift morgue during the Siege of Sarajevo that lasted from 1992 to 1996.

Almost 2,000 victims are buried next to the stadium in FK Sarajevo’s former training pitch and there are white grave stones all around the arena. 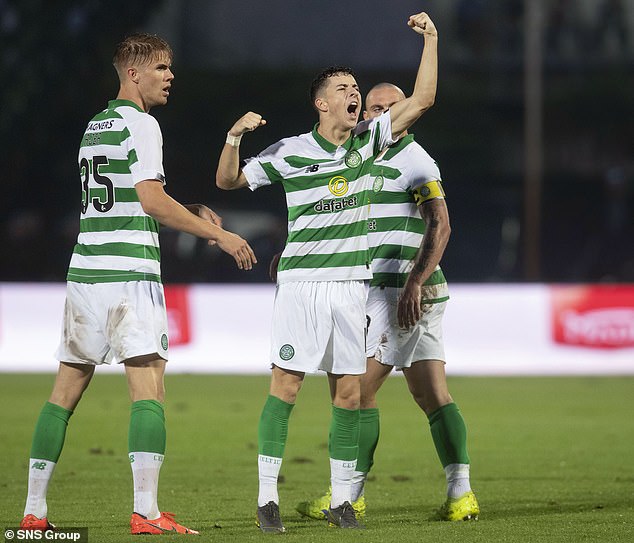 It was a sight that put football in proper perspective, as was the banner unveiled midway through the second half by FK Sarajevo fans that read: ‘Never Forgive, Never Forget,’ to mark the 24th anniversary of the July 1995 massacre in Srebrenica.

Since being accepted by UEFA post-independence, no Bosnian side has ever qualified for group-stage football in any European competition.

Locals in Sarajevo were not quite aiming that high this year. But Celtic’s visit offered the chance to live out their long-term dreams of hosting big continental footballing occasions — for one night, at least — as they welcomed the 1967 European Cup winners. 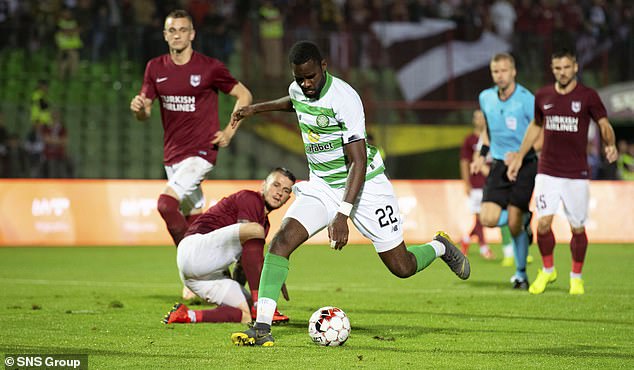 The left-back started on the left side of midfield as Celtic went with a three-man defence of Nir Bitton, Jozo Simunovic and Kris Ajer.

That meant defender Christopher Jullien, the new £7m signing from French side Toulouse, was left on the bench.

Attacker Ryan Christie returned to the Celtic starting line-up for the first time in competitive action since an horrific clash with Aberdeen’s Dom Ball in the Scottish Cup semi-final in April left him with facial injuries that medics told him were worse than if he had been hit by a baseball bat.

Meanwhile, the locals wasted no time in letting Celtic defender Simunovic know what they thought of his decision to switch allegiance from Croatia to Bosnia then perform a U-turn that leaves him in international limbo.

Sarajevo’s Ultras — who go by the name The Evil Hordes — roared their disapproval at the defender, who started nervously. 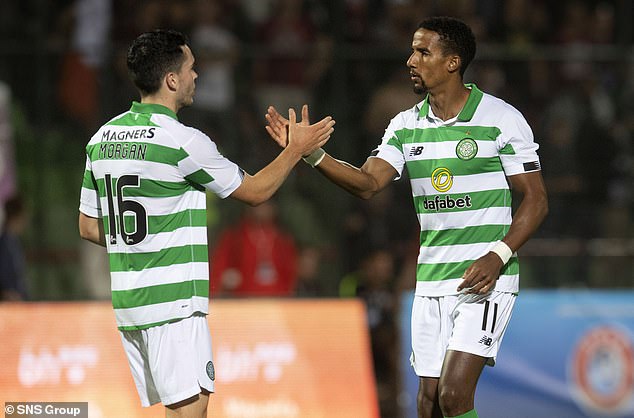 And yet, mindful of last season’s 8-0 home defeat by Italian side Atalanta in the Europa League, FK initially sat in deep and were happy to defend as both sides toiled in the slippy, monsoon conditions.

However, there was soon a real scare for Celtic after James Forrest relinquished possession easily and Slobodan Milanovic sent Anel Hebibovic racing clear on the counter.

Hebibovic looked offside but no flag came and Celtic goalkeeper Scott Bain raced to the edge of his box to make a crucial block.

Christie then had Celtic’s first attempt on goal but he dragged a fierce 25-yard shot wide.

Sarajevo were soon ahead when Simunovic seemed to ignore a shout from Bain and headed a long ball out for a corner. 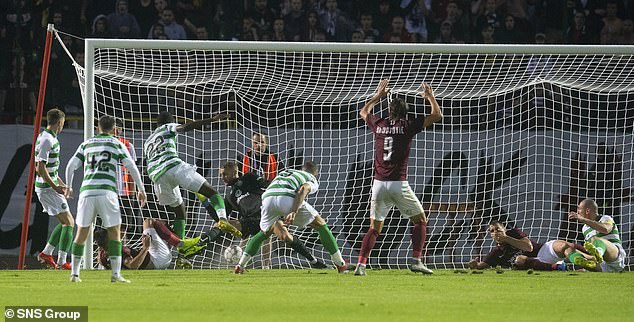 Words were exchanged between defender and keeper but worse was to follow when the corner from Milanovic broke for Oremus to fire home from close range.

As the stadium erupted in a cacophony of noise, Oremus set off on a long run of celebration, reaching a banner behind Bain’s goal that warned Celtic fans: ‘Not even a shamrock will bring you luck here!’

Johnston emerged as the hero when he lost possession but then pounced on the loose ball before sending a wonderful shot into the Sarajevo net.

Forrest then danced into the box after good work from Edouard, but the Scotland international’s chip sailed over the bar.

Celtic’s possession football was now infuriating the locals, yet half-time came at the wrong time for the Scottish champions, who were by now well on top.

Even so, within six minutes of the restart, the visitors were ahead.

Captain Scott Brown picked up a loose ball and found Forrest, who picked out Edouard.

The Frenchman, who signed off for last season with both goals in the Scottish Cup final win over Hearts, kept his cool to dispatch a clever lifted finish beyond Kovacevic.

And when the lurking Sinclair supplied a fine backheel finish to a delivery from fellow substitute Lewis Morgan with five minutes left, it was game over for Sarajevo.

By now the storm had long passed, both on and off the field, and Lennon was savouring a winning start to his second permanent spell in charge of the Parkhead club.

Barring a calamity back home in Glasgow, his side have one foot in the next round — against either Estonians Nomme Kalju or Shkendija of Macedonia — on the long road back to the £30million Champions League group stage.