Connecting with eight receivers, Flacco went 25 for 40 without an interception on a rainy afternoon. He threw 28 passes in the first half alone, when Baltimore (2-1) took control.

Baltimore Ravens quarterback Joe Flacco prepares to throw to a receiver in the first half of an NFL football game against the Denver Broncos, Sunday, Sept. 23, 2018, in Baltimore. (AP Photo/Nick Wass)

Javorious Allen caught a 12-yard touchdown pass and ran for a score for the Ravens.

Denver was coming off two home wins, both by virtue of fourth-quarter comebacks. This time, the Broncos could not rally after Allen’s 1-yard TD run made it 27-14 midway through the third quarter.

Denver was inside the Baltimore 5 with 9 minutes left before Case Keenum was intercepted by Patrick Onwuasor, whose 89-yard return for a touchdown was wiped out by a block in the back.

The Broncos’ next drive ended at the Baltimore 11.

Denver got a touchdown after blocking a punt and also swatted away a field goal try. Chris Harris took the second blocked kick 58 yards for a touchdown, but an illegal block nullified the second-quarter score.

On the ensuing series, Broncos rookie running back Phillip Lindsay was ejected for throwing a punch during the scramble for a fumble by Keenum.

A wild first half ended with Baltimore up 20-14.

After Denver’s Joseph Jones blocked a punt to set up a 6-yard touchdown run by Royce Freeman, Alex Collins ran in from the 6 for Baltimore.

Broncos wide receiver Emmanuel Sanders made it 14-7 with a 35-yard end around, his first career rushing touchdown.

Justin Tucker sandwiched a pair of 52-yard field goals around a 12-yard touchdown throw by Flacco.

Tucker now has six career games with multiple field goals of 50 yards or more, an NFL record. He has also connected on his last eight attempts from at least 50 yards.

The Ravens welcomed back linebacker Ray Lewis, who was inducted into the Pro Football Hall of Fame in August following a 17-year career with Baltimore.

After the players were introduced, the song “Hot in Herre” by Nelly boomed over the PA.

Lewis emerged from the tunnel wearing his yellow Hall of Fame jacket and performed his trademark dance while the soggy crowd cheered.

Lewis was presented with his Hall of Fame ring during a ceremony at halftime. He was joined by Jonathan Ogden, the Ravens’ other HOF member.

Broncos: S Darian Stewart left in the second quarter with a shoulder injury but returned.

Ravens: MLB C.J. Mosley was inactive with a bruised knee.

Ravens travel to Pittsburgh for a Sunday night matchup between AFC North teams. 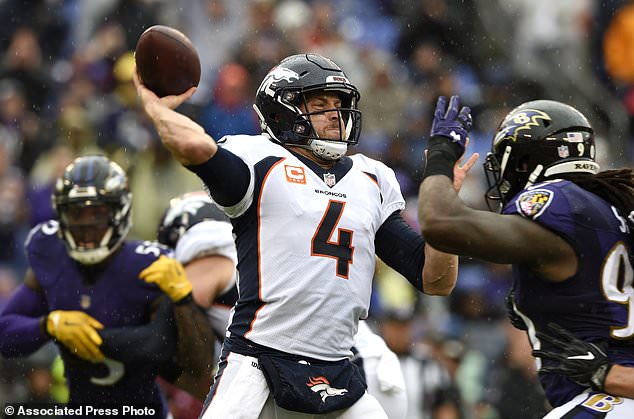 Denver Broncos quarterback Case Keenum, center, throws a pass as he is pressured by Baltimore Ravens linebacker Za’Darius Smith, right, in the first half of an NFL football game, Sunday, Sept. 23, 2018, in Baltimore. (AP Photo/Gail Burton) 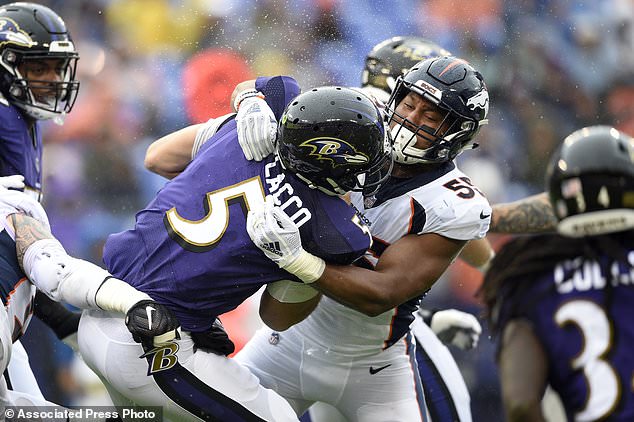 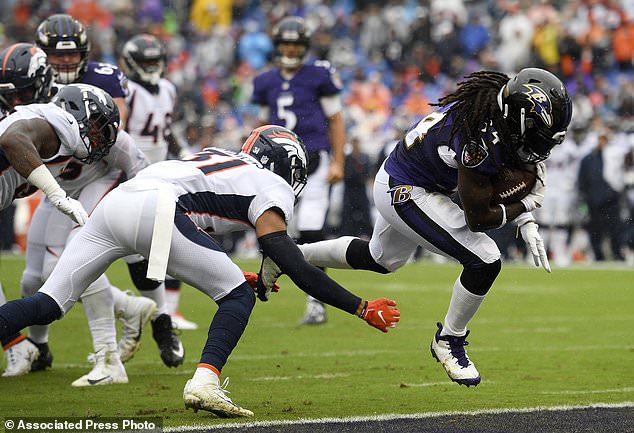 Baltimore Ravens running back Alex Collins, right, rushes past Denver Broncos defensive back Justin Simmons for a touchdown in the first half of an NFL football game, Sunday, Sept. 23, 2018, in Baltimore. (AP Photo/Nick Wass) 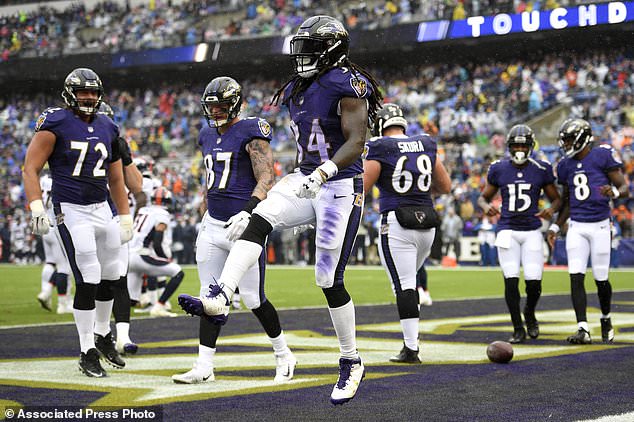 Baltimore Ravens running back Alex Collins, center, celebrates his touchdown in the first half of an NFL football game against the Denver Broncos, Sunday, Sept. 23, 2018, in Baltimore. (AP Photo/Nick Wass)