Flake takes his war on Trump to the airwaves

Arizona Sen. Jeff Flake warned against the dangers of countenancing President Trump’s behavior in interview after interview Wednesday morning, hours after he announced he would leave the Senate.

Flake predicted more and more Republicans would ‘stand up’ to the president, even as Trump took credit for causing Flake’s ouster and few of his colleagues endorsed the substance of his stunning Tuesday speech.

And he refused to rule challenging Trump in a primary in 2020 when pressed repeatedly on it.

‘That is not on my radar screen, ‘That’s a long way off.” he told CNN’s ‘New Day,’ chuckling during his response.

Asked if the thought of running a primary against the president had crossed his mind, he told host Alisyn Camerota, ‘I’m focused on my work in the Senate. I have another good 14 months.’

Pressed again, he said, he hasn’t ‘entertained that thought for very long, no.’

Arizona Sen. Jeff Flake predicted more and more Republicans would ‘stand up’ to the president, a day after he announced his retirement

Flake continued to pound Trump for his ‘unbecoming’ behavior in an appearance on NBC’s ‘Today’ Show, one of round of appearances he made Wednesday.

‘If he continues with the kind of tweeting and behavior that’s unbecoming of the president, we ought to at least stand up and say so,’ Flake said.

The two-term Republican announced his decision to retire, saying it was no longer possible to be at odds with the president even while compiling a conservative voting record on policy. Flake is a libertarian-leaning conservative who spent his time in Congress opposing taxes and pushing for less government.

‘I just can’t continue with this kind of politics,’ he told ABC’s ‘Good Morning America’ today. ‘I couldn’t go on and run the kind of campaign that I wanted to run and win in this kind of Republican Party.’

Asked if Trump deserves credit for pushing him out, Flake admitted: ‘I guess the president does deserve credit if you want to call it that.’ 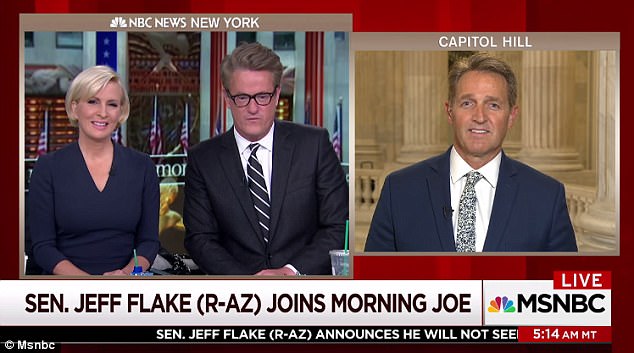 Arizona Sen. Jeff Flake made the rounds on TV shows Wednesday morning after tearing into President Trump in an extraordinary floor speech

He even found himself a self-described RINO – a term that used to be applied to the moderate wing of the party.

‘Yes, I’m not sure when that transformation happened, but — but all of a sudden, yes, I’m a RINO, Republican in name only, and so I – politics have changed quite a bit. That’s all I can say,’ Flake said.

Flake was one of a relatively small group of sitting lawmakers who called out Trump for some of his statements during the campaign. 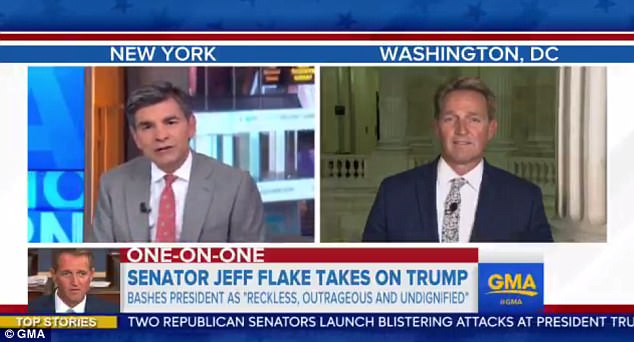 Arizona Sen. Jeff Flake made the rounds on TV shows Wednesday morning after tearing into President Trump in an extraordinary floor speech

‘I didn’t get off on the right foot, I guess, with the administration back in the campaign,’ he acknowledged.

He said GOP primary voters ‘take any criticism of the president as somehow something that’s not conservative. And that’s what’s got to change.’

‘A lot of my colleagues have spoken out and I think a lot more will,’ he predicted, although numerous GOP senators turned down the chance to follow his lead.

Flake kept up his criticism on NBC’s ‘Today’ show. ‘How can we explain to our kids that we are countenancing this kind of behavior from the top,’ he said.

He told CNN’s ‘New Day’ he couldn’t run the kind of campaign he would be ‘proud’ of in the current environment. Critics on the left have asked why Flake wouldn’t stay and challenge Trump or try to run a race based on resisting him.

‘It’s tough. I’m competitive, I like to fight these battles. But I also know that I couldn’t run the kind of race that I would be proud of and win in a Republican primary at this time,’ he told CNN.

‘The politics in that way has changed. You can be conservative on policy and it doesn’t matter it seems as much as being with the president or not criticizing him, even if you think he’s wrong,’ he continued.

Trump slammed Flake as well as Tennessee Republican Sen. Bob Corker hours after both issued extraordinary denunciations of the way he has conducted his presidency, rapping them for acting ‘hurt’ and ‘wounded.’

Trump hit back at Flake after the two-term Arizona lawmaker delivered a blistering Senate floor speech where he said he could no longer be ‘complicit’ in aiding Trump.

That remarkable event occurred just moments after the conclusion of a GOP Senate lunch with Trump and hours after an increasingly caustic exchange between Trump and Corker, the retiring Senate Foreign Relations Committee chairman from Tennessee.

THAT WENT WELL: Trump also tweeted about his Tuesday meeting with Senate Repubicans

Both men were facing difficult reelection prospects when they announced their decisions to leave the Senate and immediately began unloading on Trump.

‘The reason Flake and Corker dropped out of the Senate race is very simple, they had zero chance of being elected. Now act so hurt & wounded!’ Trump Tweeted Wednesday.

The president also sent out an up-beat missive about Tuesday’s meeting, which failed to repair a breach between Trump and his majority party in the Senate.

‘The meeting with Republican Senators yesterday, outside of Flake and Corker, was a love fest with standing ovations and great ideas for USA!’ the president wrote.

Trump was still seething an hour later, when he sent a second tweet denigrating Flake and patting himself on the back for the standing ovation he claims he received.

‘Jeff Flake, with an 18% approval rating in Arizona, said ‘a lot of my colleagues have spoken out.’ Really, they just gave me a standing O!’ Trump said.