The singer and guitarist, 77, said she has little hope that Stevie Nicks, 72, will rejoin the band for a tour, while bassist John McVie is feeling ‘frail’ after he battled cancer and other health issues last year.

The Everywhere hitmaker ruled out plans for any tours in the near future with the iconic band – whose current line-up also includes  Mick Fleetwood, Mike Campbell and Neil Finn – while appearing on BBC Radio 2.

She said: ‘That’s an impossible question to even answer. If we do, it will be without John and without Stevie.

‘I think I’m getting a bit too old for it now, especially having had a year off. I don’t know if I can get myself back into it again.

‘I know Mick would do it in a lightning strike. But I couldn’t possibly say. We’re certainly not touring this year either.’

The group last toured from 2018-2019 with their An Evening with Fleetwood Mac shows. 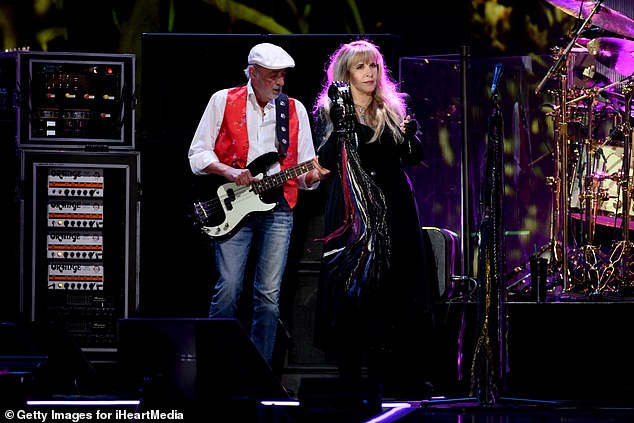 Don’t Stop: The singer and guitarist, 77, said she has little hope that Stevie Nicks will rejoin the band for a tour, while while bassist John McVie is feeling ‘frail’ after he battled cancer and other health issues last year (pictured 2018)

However, Stevie previously insisted she has missed performing live for her fans during the coronavirus pandemic.

Back in October, she said: ‘Well, this was meant to be a year off for me, but I was still performing six shows and we probably would have added six more. I do miss it – I don’t feel like myself.

‘I look at these next six or so years as my last youthful years, when I’m going to feel like putting on six-inch heels and dancing across a stage for the world.

‘Because, really, at some point you have to go, “OK, you’ll be 80 – just exactly how long can you cartwheel across the world?’ I don’t have that much time left to be a rock star.’ 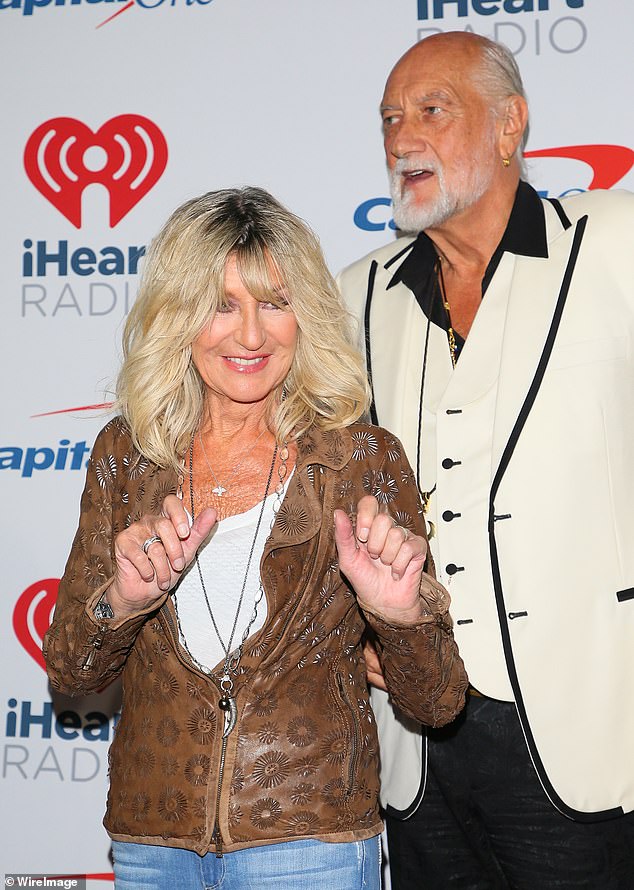 Tour: Christine said: ‘I think I’m getting a bit too old for it now, especially having had a year off. I don’t know if I can get myself back into it again, I know Mick would do it in a lightning strike (pictured together in 2018)

Meanwhile, Christine also gave an update on her ex-husband’s health, and explained he simply ‘hasn’t got the heart’ for touring at this point.

She added: ‘He is feeling a little bit frail. You know he was ill. He’s fine, but he just hasn’t got the heart for it any more.

‘He wants to get on his boat. You reach a certain age where you go, ‘Hey, I’m not going to bust a gut doing this anymore.’ ‘

Fleetwood Mac formed in London in 1967 and has become as famous for its tumultuous relationships as it is for the timeless songs some of that that inspired.

The breakdown of romantic relationships within the band — between Buckingham and Nicks, as well as former married bassist/keyboardist couple, John and Christine McVie — caused ruptures even though they continued to make music together, surviving several break-ups, reunions and line-up changes.

McVie herself left the band in 1998, only to rejoin 16 years later and complete the most successful five-strong line-up of Fleetwood Mac. 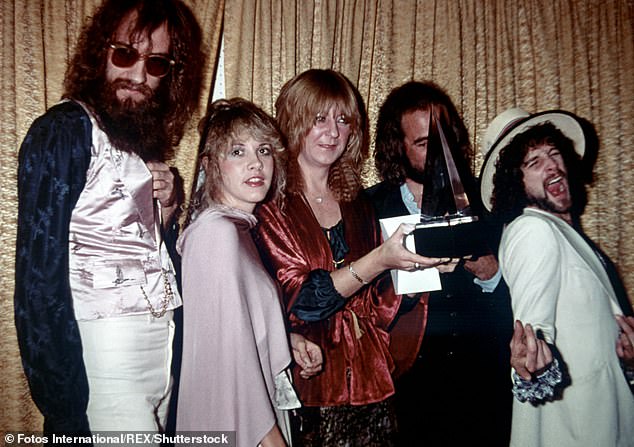 On off: Fleetwood Mac formed in London in 1967 and has become as famous for its tumultuous relationships as it is for the timeless songs some of that inspired (Mick Fleetwood, Stevie Nicks, Christine McVie, John McVie and Lindsey Buckingham, America in 1978)

The songstress was introduced to the band early on when she was still Christine Perfect. She wed bassist John McVie in 1968, becoming a full-fledged member two years later.

Fleetwood Mac achieved even greater popularity with the addition of Stevie and Lindsey Buckingham in the mid-1970s.

Christine wrote the hits Don’t Stop, Say You Love Me, You Make Loving Fun, Songbird, Little Lies and Hold Me.

Despite her and John’s divorce in 1976, she continued to make music for the band before leaving in 1998.

In 2018, lead guitarist Lindsey was fired from the band after 43 years with Mick saying  the classic line-up had put 18 months planning into a new tour, but Buckingham refused to sign off. 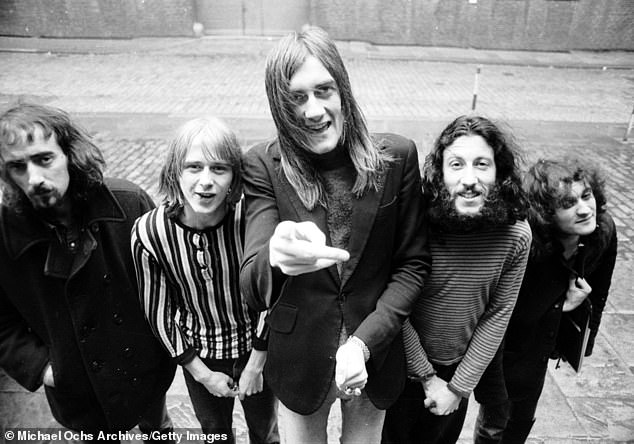 ‘It became just a huge impasse and hit a brick wall, where we decided that we had to part company,’ he said.

When asked if Buckingham was fired, he replied: ‘Well, we don’t use that word because I think it’s ugly.

He continued. ‘But it’s like a marriage that came to an end and there are reasons why… But as a band we needed to move on and we have. 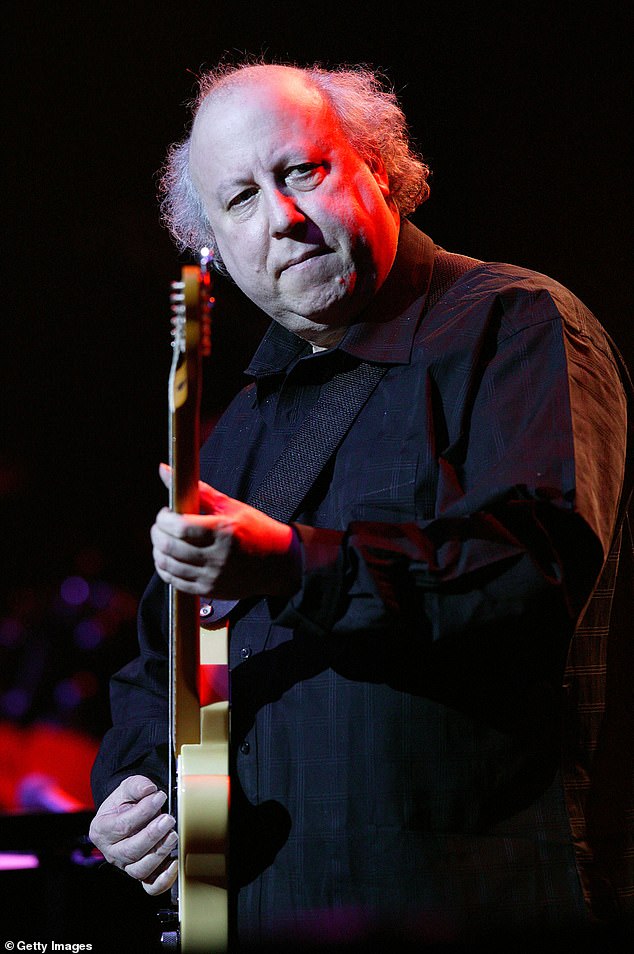 Lindsey was replaced on the tour by Crowded House’s Neil Finn and Tom Petty & The Heartbreakers’ Mike Campbell.

Lindsey first joined the group in 1974, on the condition he got to bring his folk rock singing partner and then-girlfriend Nicks with him.

Their addition helped propel the band into their golden age, making them one of the best selling groups in the world.

Green left Fleetwood Mac after a final performance in 1970 as he struggled with mental health difficulties and spiralling drug use, later sleeping rough. 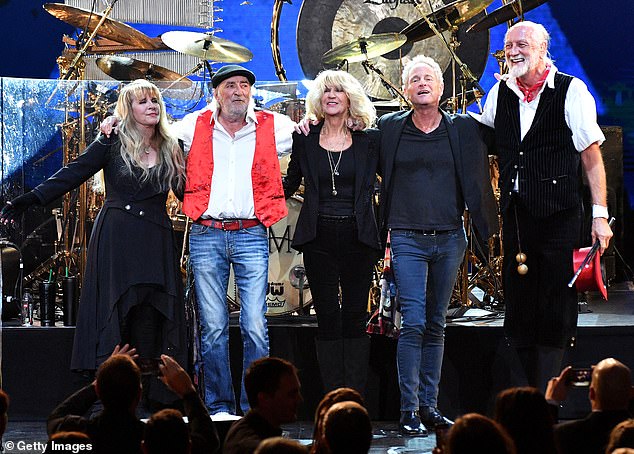 Change: In 2018, lead guitarist Lindsey Buckingham (second right) was fired from the band after 43 years with Mick saying the classic line-up had put 18 months planning into a new tour, but Buckingham refused to sign off

He was eventually diagnosed with schizophrenia and spent time in hospitals undergoing electro-convulsive therapy during the mid-70s.

The band continued with a transformed line-up featuring a core group of Fleetwood, Nicks, Buckingham, and the McVies. This phase gave rise to their huge albums Fleetwood Mac and Rumours.

Jeremy later explained he had been approached in the street by a Children of God member named Apollos, got chatting about religion and was invited to visit a nearby ‘church mission’. 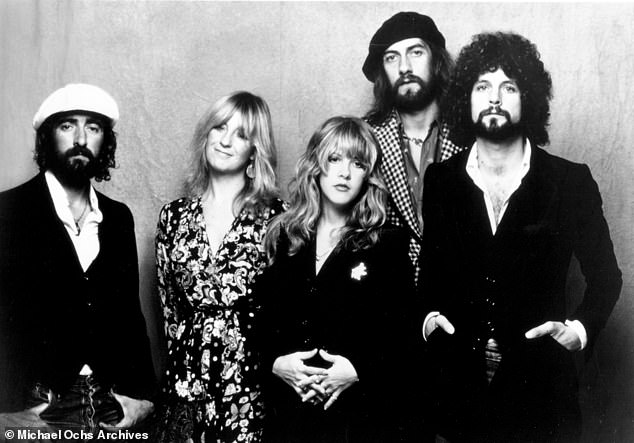 Turbulent times: John and Christine McVie  divorced in 1976 while still in the band while Stevie Nicks enjoyed romances with Lindsey and Mick (pictured 1977)

The next guitarist to come unstuck was Danny Kirwan, whose problem was heavy drinking. During 1972, just as the band was about to go on stage one night, Kirwan started ranting about a bandmate’s guitar being out of tune and then wrecked his dressing room.

He refused to play, and when his bandmates came off later and he tried to offer them tips on how to play better, his fate was sealed. Fleetwood sacked him.

His replacement, Bob Weston, had an affair with Fleetwood’s wife, Jenny. Weston died of a gastro-intestinal haemorrhage last year — within months, of another Mac guitarist, Bob Welch, committing suicide at 64 in his flat. 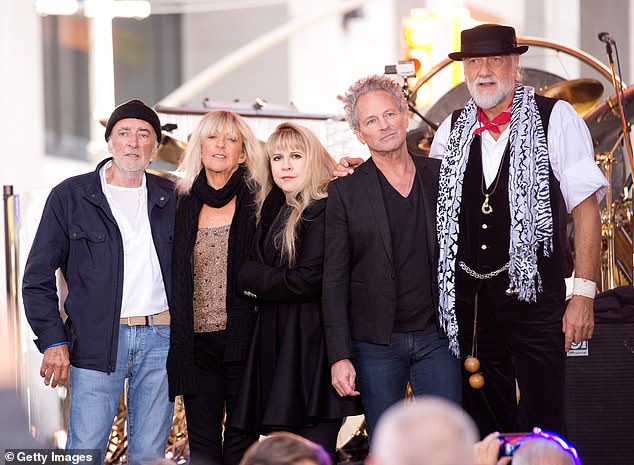 Late last year, their album Rumours re-entered the top 10 with the help of a TikTok video featuring the artists’ iconic single Dreams.

The British-American rock band re-joined the Billboard charts with its famed album, 43 years after it was first released.

Rumours jumped up to No. 9 in the chart, creeping up an impressive six spots from the week before.

Dreams, Fleetwood Mac’s second single from the 1977 album, has seen an even bigger leap, landing at No. 3 in the chart, according to Variety.

Rumours originally spent a staggering 31 non-consecutive weeks at No. 1 on the Billboard 200 across 1977 and 1978 and has now returned to the top ten for the first time since 1978.

The single has now found its way to the top of the iTunes chart and was also among the 50 most-streamed songs on Spotify.

Apodaca, who uses the TikTok handle 420doggface208, filmed himself lip-syncing to Dreams while sipping on Ocean Spray’s Cran-Raspberry juice and cruising on his long board across an empty highway.

Fleetwood Mac’s self-titled 1975 album also benefited from Apodaca’s success, moving up to No. 44 on the Billboard chart this week. 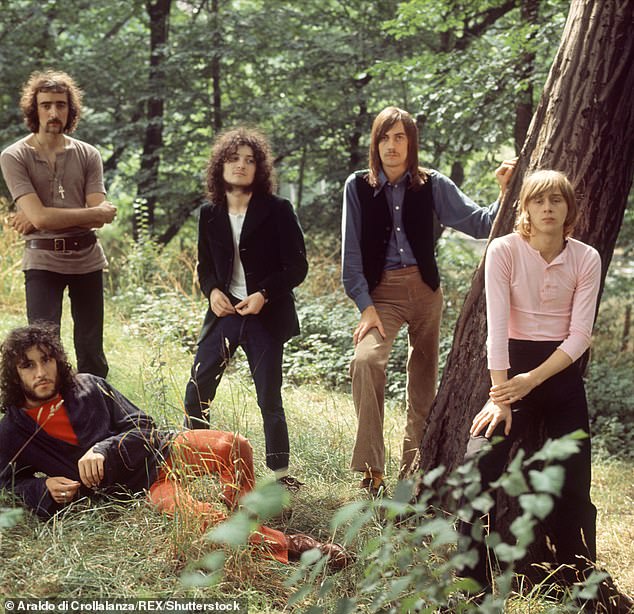 Iconic: Dreams first climbed to the No. 1 spot on the Billboard Hot 100 on June 18, 1977, and held that spot for one week (Fleetwood Mac pictured in 1969, L-R Peter Green, John, Jeremy Spencer, Mick and Danny Kirwan)