Fleetwood Mac singer and keyboardist Christine McVie has become the fourth member of the legendary rock band to sell her back catalogue.

The Lancashire-born musician, 78, has sold her rights to future royalties from 115 songs to music IP investment company Hipgnosis, which also bought the back catalogue of the band’s guitarist Lindsey Buckingham earlier this year.

Back in January, drummer Mick Fleetwood sold his publishing rights to music giant BMG, while fellow singer Stevie Nicks earned an estimated $80million to $100million from selling an 80 per cent share of her back catalogue in late 2020.

Songstress: McVie joined Fleetwood Mac in 1970 and has been behind some of the group’s biggest-selling hits, including Don’t Stop and You Make Loving Fun and Little Lies

It means bassist John McVie, Christine’s former husband, is the only longtime member of the group to have not sold his publishing rights, though he has written few of the band’s songs.

Hipgnosis co-founder Merck Mercuriadis said Christine McVie ‘is one of the greatest songwriters of all time, having guided Fleetwood Mac to almost 150 million albums sold and making them one of the best-selling bands of all time globally.’

After a spell with blues band Chicken Shack, McVie joined Fleetwood Mac in 1970 and has been behind some of the group’s biggest-selling hits, including Don’t Stop, You Make Loving Fun and Little Lies.

McVie has also won two Grammy Awards, an Ivor Novello Award for Lifetime Achievement, and was inducted into the Rock n Roll Hall of Fame in 1998 along with the rest of her bandmates.

The same year, she began a long hiatus from the band and lived – largely out of the limelight – in a small village in Kent before rejoining the group in 2014 and performing on its On with the Show tour. 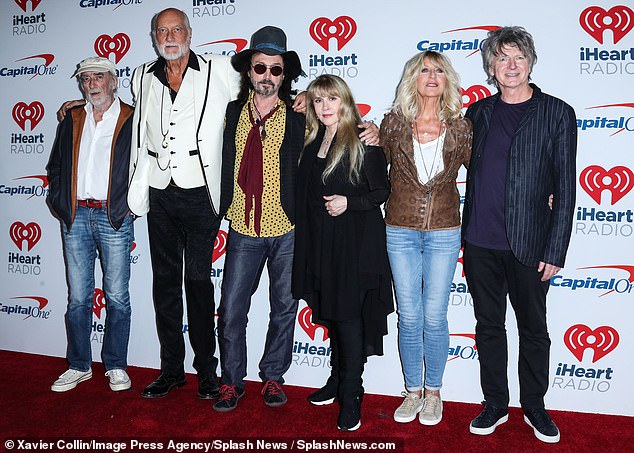 Dreams: Music fans have bought more than 150 million of Fleetwood’s albums since its founding in 1967 by Mick Fleetwood (second from left) and Peter Green, who died in July 2020

Mercuriadis, a former Elton John manager who co-founded Hipgnosis with Chic guitarist Nile Roders, noted that of the 16 songs on the band’s Greatest Hits album, McVie – born Christine Perfect – had composed half of them.

He added: ‘It’s wonderful for us to welcome Christine to the Hipgnosis Family and particularly wonderful to reunite her once again at Hipgnosis with Lindsey Buckingham.’

Music fans have bought more than 150 million of Fleetwood’s albums since its founding in 1967 by Mick Fleetwood and Peter Green, who died in July 2020.

Fleetwood Mac’s other major hits have included Go Your Own Way, Dreams, Tusk and The Chain. The latter has become well known in the UK for being the theme tune to television coverage of Formula One racing. 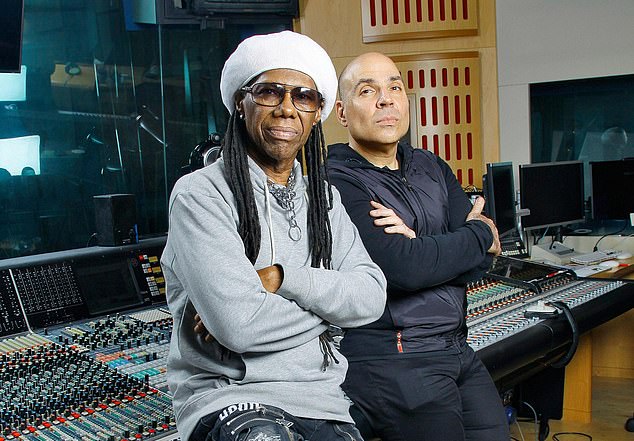 Song buyers: Nile Rodgers (left) and Merck Mercuriadis (right) are the founders of Hipgnosis Songs Fund, which owns the rights to songs by artists such as Shakira and Debbie Harry

McVie expressed elation with the sale, stating that she was ‘thrilled that you all regard my songs worthy of merit. I’d like to thank you all for your faith in me, and I’ll do all I can to continue this new relationship and help in any way I can!’

Hipgnosis did not reveal how much it spent purchasing McVie’s rights, but the firm has raised over £1billion to buy the back catalogues of major artists such as Debbie Harry, and Shakira. It is rumoured to be working on a deal to buy the rights to The Red Hot Chili Peppers music too.

The large number of back catalogues acquired in recent years has been compared to a music gold rush, as investors spend ample sums grabbing the rights to music royalties that they hope will provide a stable long-term source of income thanks to streaming.

It can also be a way for musicians to earn one last big payday. Bob Dylan scored an estimated $300million when he sold his back catalogue of 600 songs, including Blowin’ in the Wind and Knockin’ on Heaven’s Door, to Universal Music Group.

Meanwhile, Oasis frontman Noel Gallagher has said he could sell his back catalogue in 2025 for as much as $200million and use the money to buy a superyacht.