US health officials are warning that a serious genital infection has been linked to a certain class of diabetes drugs.

On Wednesday, the US Food and Drug Administration (FDA) reported that 11 people have been left hospitalized and one has died after contracting the flesh-eating disease known as Fournier’s gangrene.

Although it can be treated when detected quickly, many need multiple surgeries to remove the infected tissue and between 20 and 40 percent die from complications.

The warning pertains to a class of medicines called SGLT2 inhibitors, first approved in 2013 to lower blood sugar in adults with type 2 diabetes.

The US health regulator is now calling for the risk to be included on the drugs’ labeling and to the patient Medication Guide. 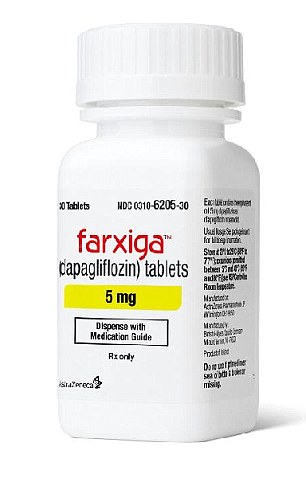 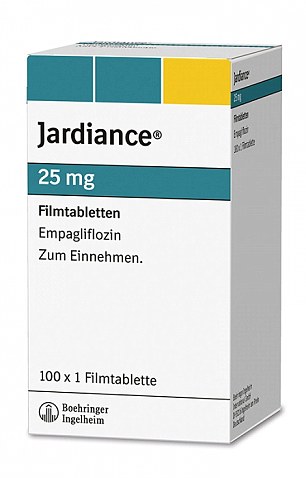 Fournier’s gangrene – an infection of the scrotum, the penis, or perineum – has been linked to SGLT2 inhibitors, which lower blood sugar in adults with type 2 diabetes. So far, 11 people have been hospitalized and one has died. Pictured, left and right: SGLT2 inhibitors approved by the FDA

Fournier’s gangrene is a rare infection that occurs when body tissue is dead or dying.

Bacteria enters the body through a cut or a break in the skin and quickly spreads, infecting the scrotum, the penis, or the perineum – the area between the scrotum and anus for a man or between the anus and vulva for a woman.

Fournier’s typically occurs in those between the ages of 50 and 60 and is five to 10 times more likely to occur in men than in women, according to the National Organization for Rare Disorders.

The disease is often found in those with disorders that weaken the immune system  including diabetes; obesity; and cirrhosis, a chronic liver disease that can involve the loss of liver cells or permanent scarring of the organ.

The patients’ ages range between 38 and 78 but it is unclear which states they live in.

It took about an average of 9.2 months for the condition to develop and, in most cases, the patients stopped taking the drug

According to the FDA warning, all 12 patients – including the one who died – were hospitalized and required surgery to remove the dead tissue.

Five of the patients required more than one surgery and one needed a skin grafting. Two have been transferred to a rehabilitation hospital.

The FDA says that it has received reports of 12 cases of Fournier’s among patients taking SGLT2 inhibitors, of whom five were women and seven were men, between March 2013 and May 2018.

In 2017, it was estimated that 1.7 million people received a prescription for an SGLT2 inhibitor from retail pharmacies.