A flight attendant who got rid of 90 per cent of her wardrobe to live in a 150-square-foot ‘tiny house’ couldn’t be happier with her decision to ditch her clutter to make room for the things she loves in her dream home.

Lissette Arroyo, 30, moved into a converted trailer in Orlando, Florida, a little over a year ago, tossing ‘600 to 700’ pieces of clothing to keep her potential clutter at bay after downsizing to a tiny home.

‘Now, my closet consists only of the things that I like. Not just-in-case items, not I-might-wear-this-one-day things,’ she told Cosmopolitan.com. ‘I’m still getting rid of stuff, but I’ve made progress.’ 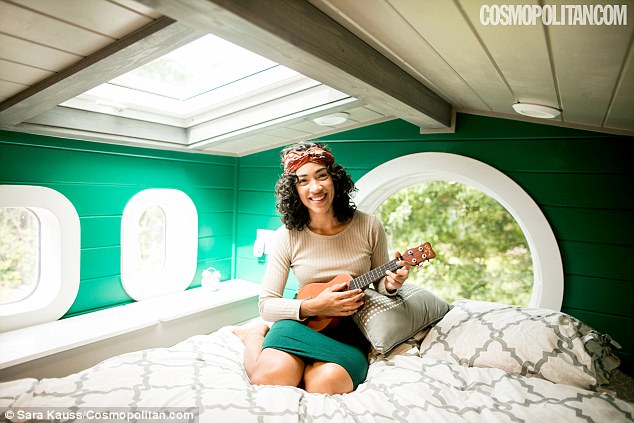 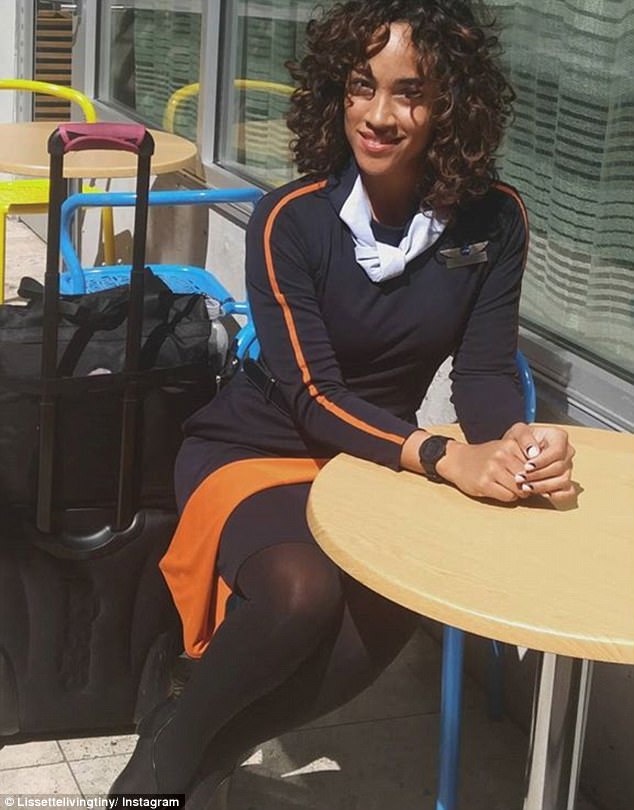 Out and about: Lissette works as a flight attendant and spends a lot of time traveling away from her home for work

As a flight attendant, she spends a great deal of her time away from home, and she went from having hundreds of pieces of clothing to having a strategic set of options to mix and match.

She is now living with ten pairs of shoes, ten tops, nine dresses, four pairs of pants, seven skirts, and three jackets, as well as some handbags and accessories.

Lissette has one slim closet for things that need to be hung up, and she stores the rest in drawers she had built in her home.

She pointed out that she even has empty spaces and drawers that she isn’t using, explaining that she wants to save space for things she enjoys, like snowboarding. 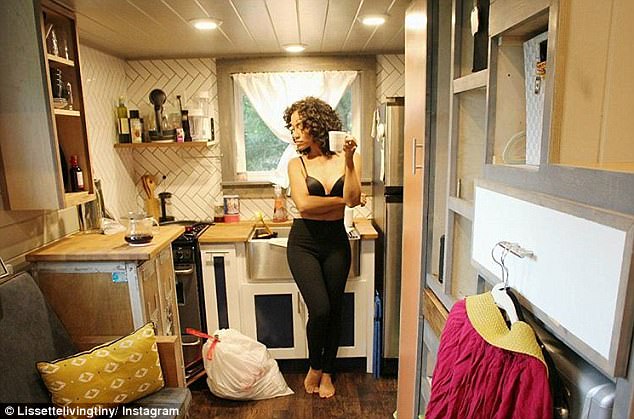 Small but cozy: Lissette’s kitchen area is located below her bedroom 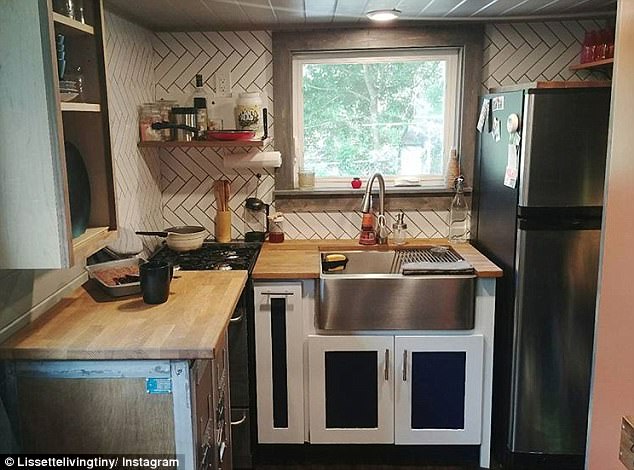 Made for one: When designing her kitchen, she included some counter space, a small stove, and a full-size refrigerator 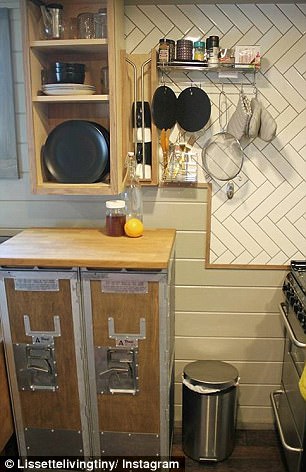 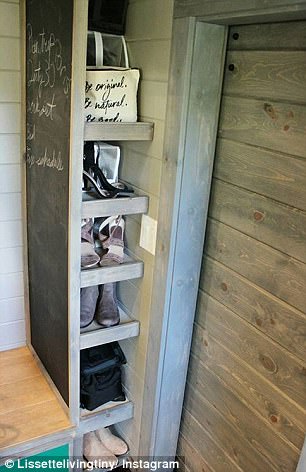 Storage: Lissette has one small shelf for her plates and glasses (left) and she stores her shoes in a thin shelving unit near the bathroom (right) 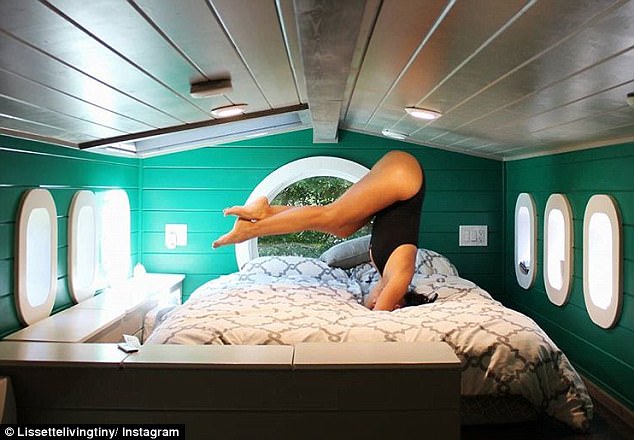 Happy haven: Her bedroom leaves her just enough room to practice yoga on her bed

Lissette’s home features two loft bedrooms — one on each side of the trailer —  a full kitchen area, a small living room, a bathroom, and even a washer to do laundry.

Although she was born in Puerto Rico and raised in Connecticut, she is no stranger to living in small spaces.

Before she moved into her tiny home, she spent seven months living in a small apartment in New York City that was less than 600-square-feet.

Like most people, she wasn’t thrilled with the high cost of living and the astronomical rent, but she realized didn’t necessarily mind living in a small space. 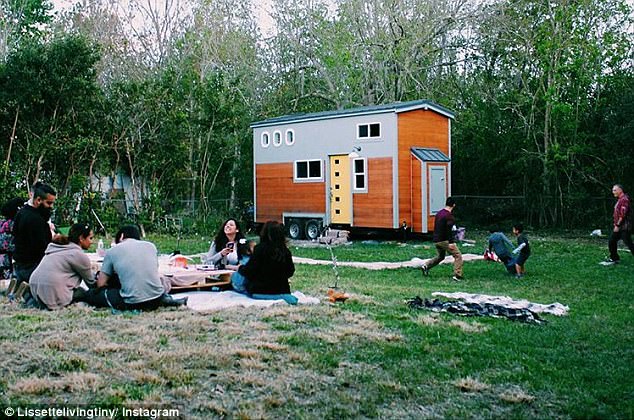 Added touches: The exterior of Lissette’s home is painted gray and has a cheerful yellow door 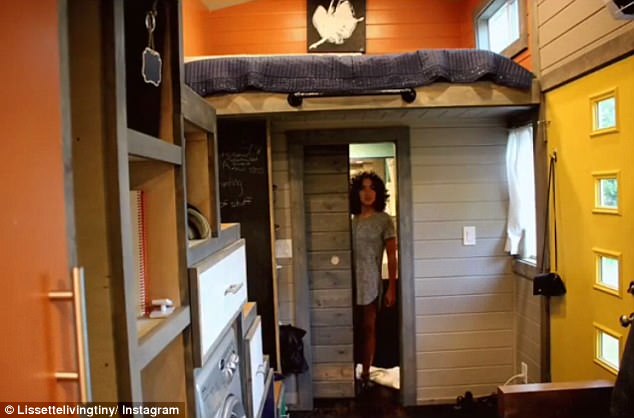 Room for everything: When you walk inside her home, her bathroom is located to the right 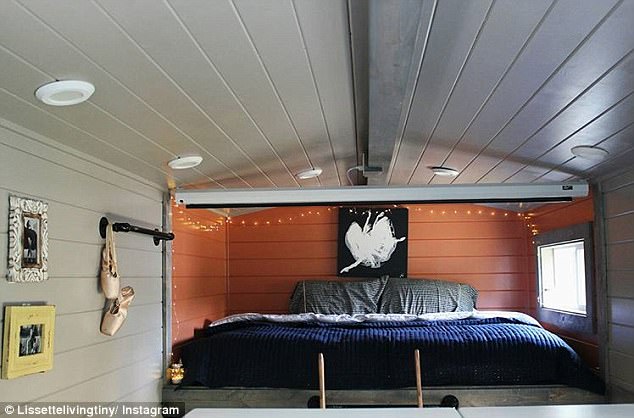 Be her guest: Lissette also has a second bed located above her bathroom, but she admitted on Instagram that climbing the ladder scares people sometimes 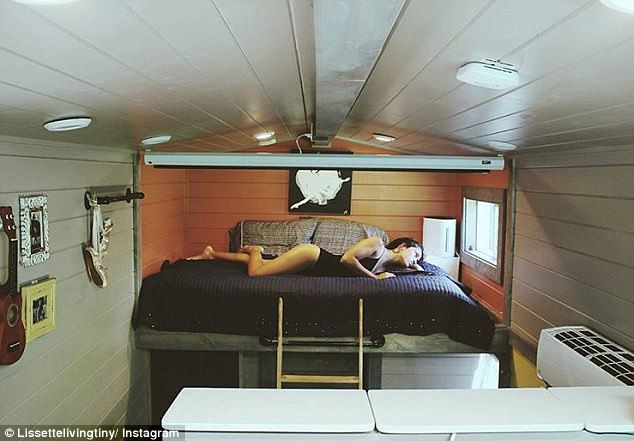 Evolution: The flight attendant may find herself using her second loft for something different if she doesn’t have as many guests as she anticipated 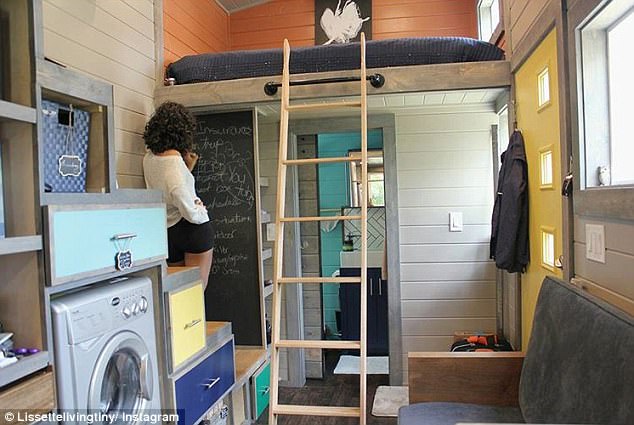 Clever: Lissette added a chalkboard near her bathroom to write notes 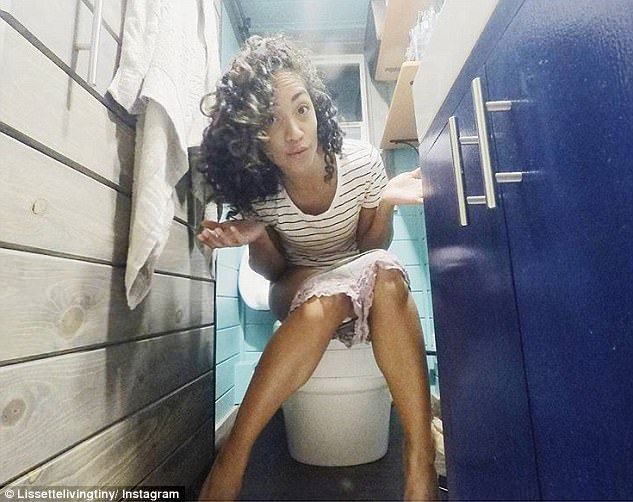 Everything she needs: Lissette’s tiny home even has a small bathroom complete with a toilet

When she moved to Orlando, she started wondering what it would be like to have her own tiny home and researched her options.

Lissette worked with Tiny Heirloom, the builders featured on the HGTV&DIY series Tiny Luxury, and documented the process of finding her home on the show.

She moved into her tiny home at the end of December 2016 and spent three months decluttering the space to her liking.

One of the best things about Lissette’s home is that she can move anywhere, and she admitted she’d like to head to Nashville or Denver or possibly go west.

When she’s not traveling for work, Lissette likes to document what it’s like to live tiny home in videos she shares on her YouTube channel Lissette Living Tiny.

She also shares plenty of photos of her digs on Instagram, sharing plenty of tips on how to live comfortably in a small space.