This is the shocking moment a group of British passengers began brawling on a KLM flight to Amsterdam before being hauled away by police upon landing.

A passenger filmed the incident unfold after two groups of men started arguing on the flight from Manchester to Schiphol Airport on Thursday.

The video begins as a man wearing a blue Stone Island jumper stands over another man and throws heavy punches down towards him shortly after the flight landed.

Two other men can be seen holding the young man, believed to be in his 20s, down as the three men lay into him.

Passengers are then heard screaming and shouting, ‘behave, this is an aircraft’, ‘get down’ and ‘f***ing hell’ as the brutal fight continues.

However, the furious man in blue, who appears to be in his late 20s, does not take notice and continues to punch the man who is still seated.

Loud thuds can be heard as the men’s fists hit the blonde male. 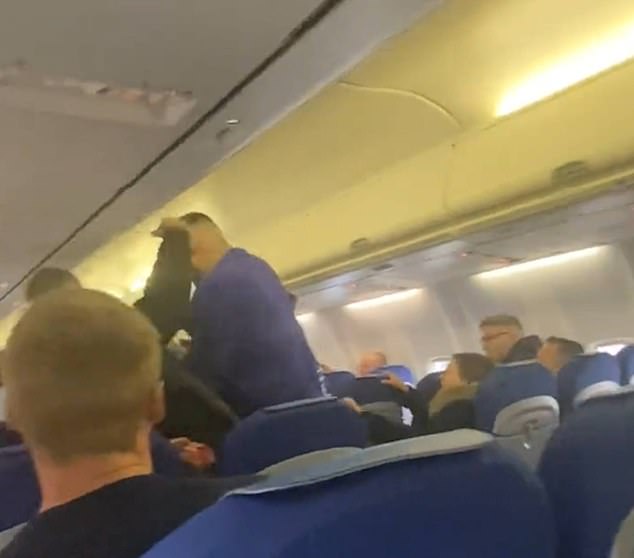 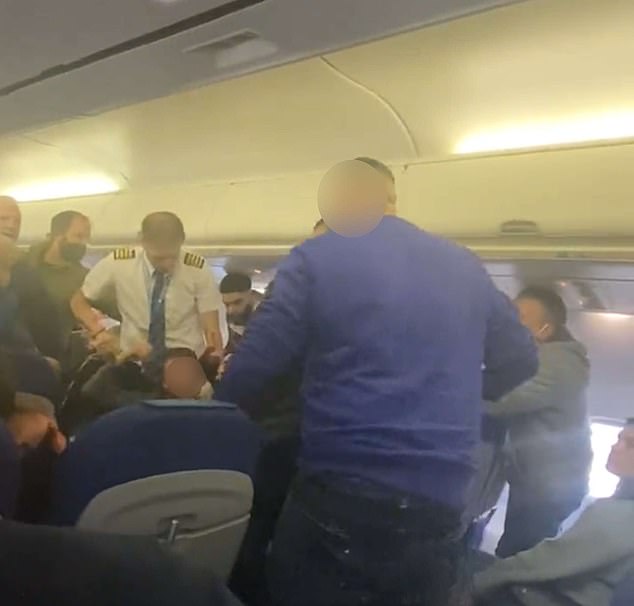 Passengers attempt to pull the warring groups off of one another

One passenger attempts to pull the man in the blue jumper back but is unable to reach.

He then continues to stomp on his victim multiple times while they are on the floor in the middle aisle.

The captain of the flight then appears and tries to calm the situation, pulling the younger male away from the raging group.

Another two men in the group, one wearing a grey jumper and another in a black jacket, then continue to lay down punches on the male who doesn’t appear to fight back.

A member of the cabin crew is heard saying: ‘Remain seated.’

The pilot then says: ‘Everybody stop. Now, stop.’

The men start to lay off and begin to return back to their seats before one man shouts: ‘You’re a son of a b***h’ to the lone victim who appears to be in shock.

A passenger on the flight, who wishes to remain anonymous, said the tension between the men on the flight had been ‘brewing’ the entire flight.

She claims a fight almost broke out during the flight because the man who was getting beat up made a racist comment.

She shared the video on Twitter yesterday, writing: ‘Nice flight to the Dam today.’

The post has gained over 1.5 million times and more than 2,000 comments from shocked viewers.

One person said: ‘Three on one and Mr Stone Island has to put the boot in too when the guy is already on the floor.

Another wrote: ‘Disgusting behaviour, they will spoil it for the many.

‘Before long you won’t be able to have anything to drink before a flight.’

A third added: ‘These are the British tourists we have to endure in Amsterdam day in, day out.

‘Guess how we feel about that as residents who are still trying to live there in the midst of this mayhem.’

The passenger who shared the footage said: ‘We’d just landed in Amsterdam, it was brewing the whole flight really.

‘They almost fought half way through the flight. I was sat a couple of rows back, they ended up saying something racist to an Asian lad and he started shouting but it got split up.

‘They were about to leave and as they were getting their bags out of the overheard locker they started to fight.

‘I was in such shock, I sat with my hand over my mouth and couldn’t believe what was happening.

‘I grabbed my sister to see if she was okay.

‘There were children on board.

‘Other passengers managed to pull them away from each other but if they could have kept going they would have.’

A spokesperson for KLM today said: ‘Yesterday we had some unruly passengers on our KLM 1070 flight from Manchester to Amsterdam.

‘The captain and cabin crew put an end to a brawl between two groups of passengers.

‘All involved were arrested upon arrival at Schiphol Airport. No delay occurred.

‘KLM does not tolerate aggression against employees or passengers.

‘We apologise to our passengers who may have been affected by the incident.’