A slow-moving storm system threatens millions of people with flooding in the Deep South, while up to six inches of snow is forecast for parts of the Great Lakes and New England.

The National Weather Service on Tuesday issued flood alerts for a region stretching from east Texas to Tennessee and North Carolina, covering some 17 million people at risk of flooding.

The slow-moving system could drop an additional two to three inches of rain into Wednesday on already-saturated ground, raising the risk of floods, the NWS said.

In Tennessee, a hillside collapsed, roads were flooded and rivers were rising on Tuesday after a day of heavy rains, and in Mississippi a dam threatened to fail. 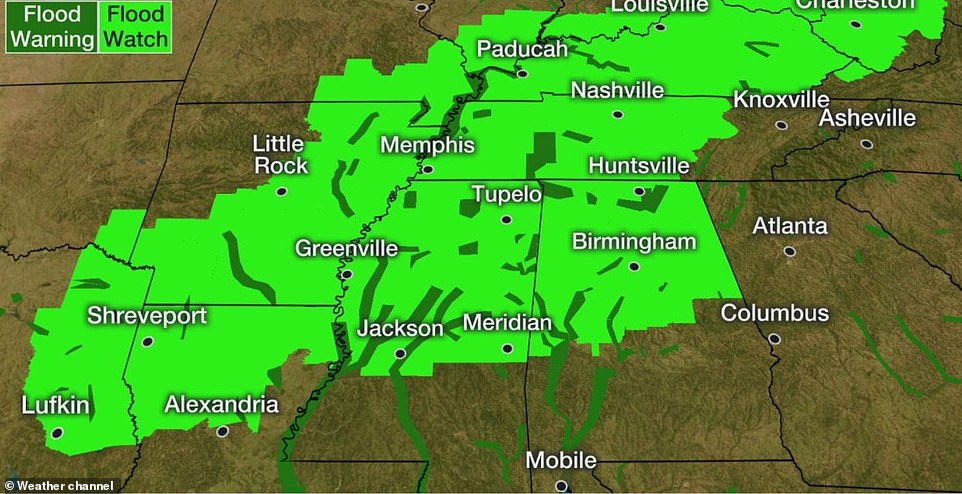 Winter storm warnings are also in effect from New Mexico to Syracuse, New York as the storm moves through this week

The National Weather Service said minor to moderate flooding was expected from central Mississippi to north Georgia following downpours. The Tennessee River was predicted to crest about 7 feet (2.1 meters) above flood level at Perryville, Tennessee, on Sunday.

Near Great Smoky Mountains National Park in eastern Tennessee, tons of rock and soil slid off a 70-foot (21-meter) hillside and blocked the northbound side of a U.S. 441 spur linking the tourist towns of Gatlinburg and Pigeon Forge, the National Park Service said.

At least 45 dump truck loads will be required to clear the road, officials estimated, but no injuires were reported.

Multiple roads were covered with water or washed out because of rainfall that exceeded 5 inches in spots across central Alabama, and forecasters said totals could reach 6 inches by nightfall.

North of Birmingham in Cullman, the sheriff’s office said Deputy Adam Clark and his police dog were badly injured in a wreck during heavy rains overnight. The cause of the crash was under investigation. 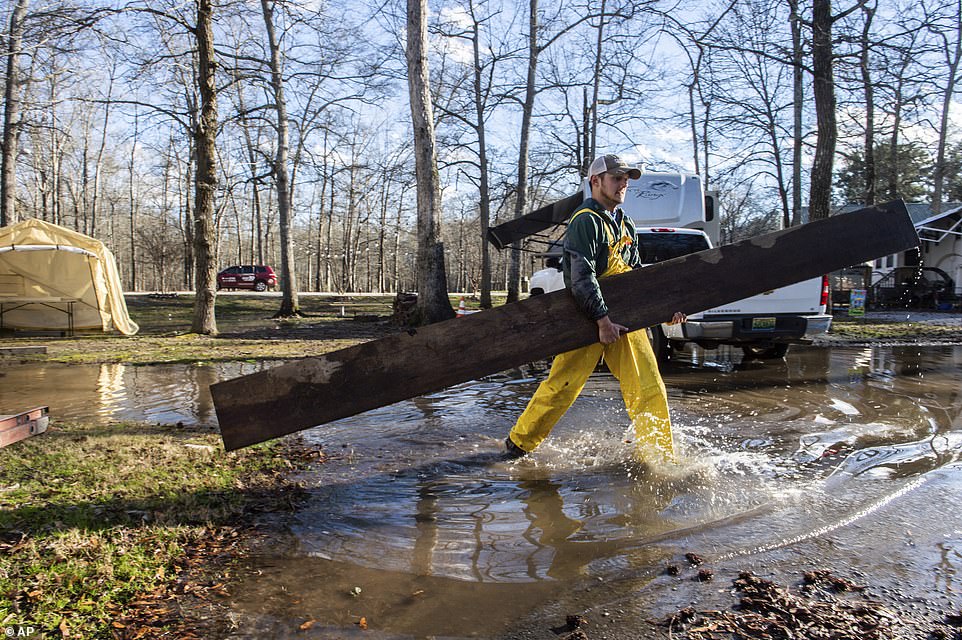 Bradley Foster carries a wooden plank to help a neighbor move their camper from flooding conditions at Point Mallard campground in Decatur, Alabama on Saturday 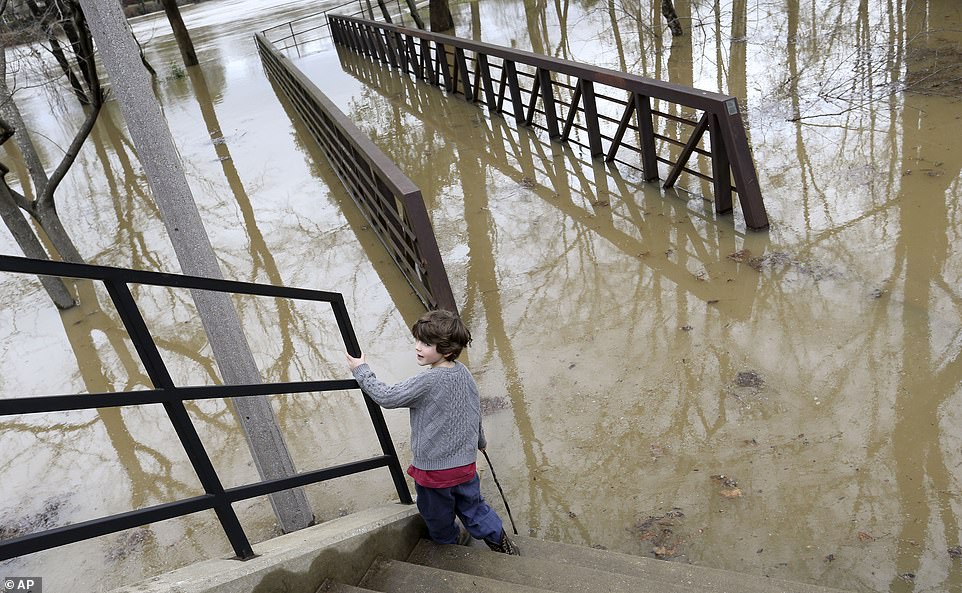 Heavy rains fell Monday leaving the Tuscaloosa, Alabama, area with high water and washed out roads, Tuesday. Gideon Altman plays near a flooded section of the Tuscaloosa Riverwalk under the supervision of his mother as waters from the Black Warrior River rise. Children in Tuscaloosa City and County schools got a day off due to the flooding 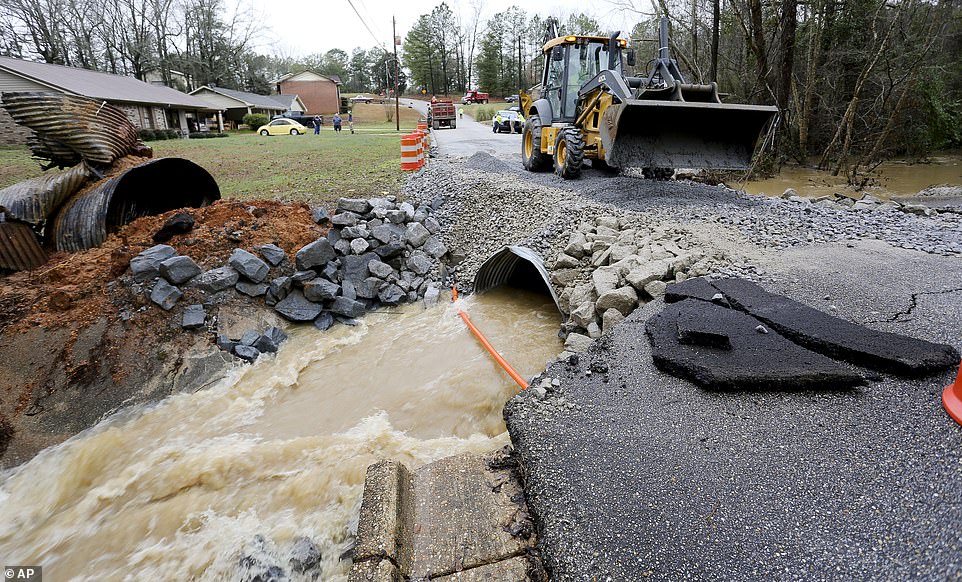 Total rainfall forecasts through Thursday are seen above. Many areas already have saturated grounds from earlier rains

In eastern Mississippi, officials in Starkville said the water at Oktibbeha County Lake had once again reached a critical level just weeks after heavy rains caused a mudslide that put the earthen dam in danger of failing.

Pumps had been used to lower the lake level by about 8 feet (2.4 meters) since mid-January, but officials said the water had risen to an even higher than before because of recent storms.

‘It has risen over 8.5 feet from our low elevation during pumping and continues to rise,’ said a statement by Kristen Campanella, emergency management director in Oktibbeha County.

Officials also were monitoring the site of a potential dam failure in Yazoo County, where the Mississippi Emergency Management Agency said a 40-acre (16-hectare) lake in a subdivision was leaking around a culvert and washing away dirt, threatening four homes and a church. Five homes were evacuated after a levee breach in Leake.

Elsewhere in Mississippi, 25 homes had been damaged and four people were hurt in wrecks caused by vehicles hydroplaning on wet roads, according to the state. The damage was worst in Yazoo, where a dozen people were displaced from homes. 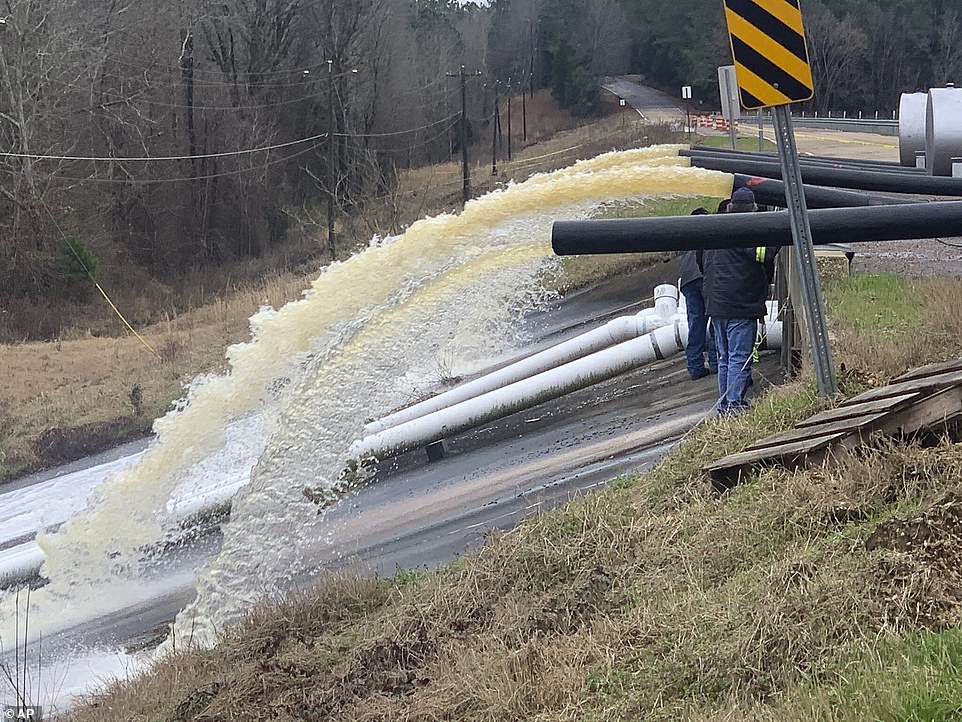 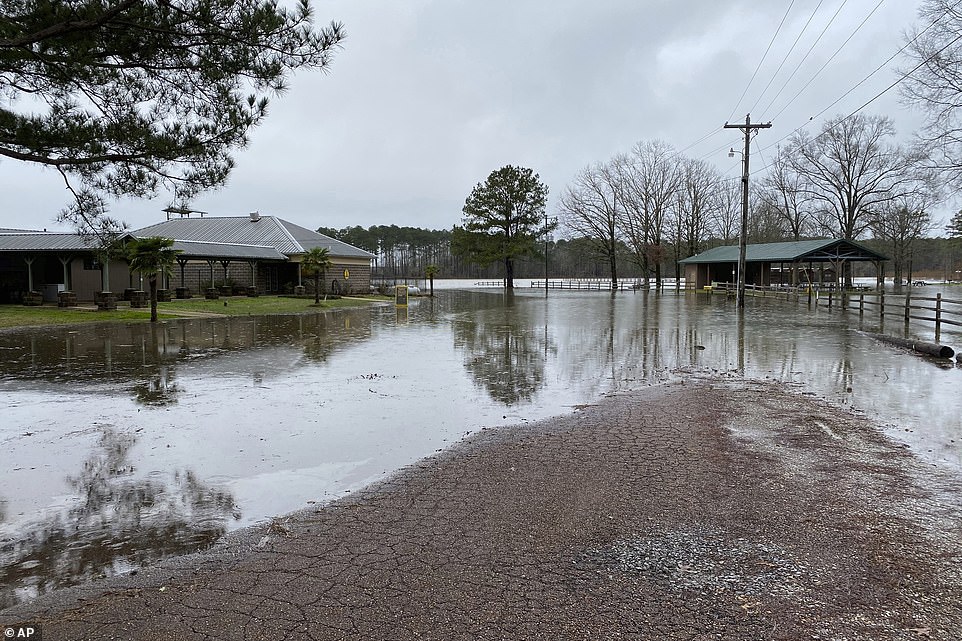 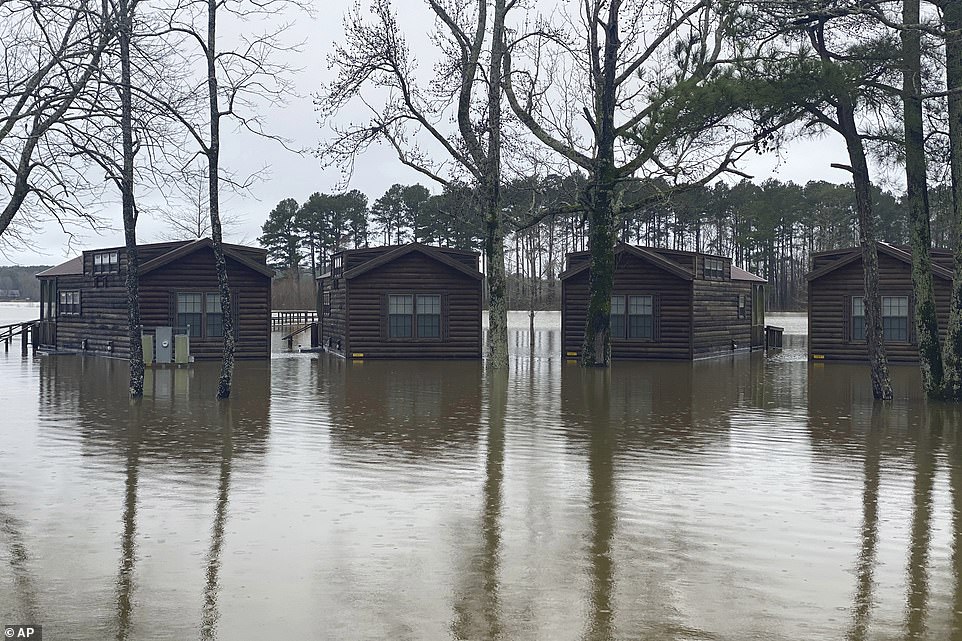 The Tennessee Valley region has received 550% of its normal rainfall during the past seven days, James Everett, senior manager of the Tennessee Valley Authority’s River Forecast Center, said in a briefing. Rainfall averaged around 6 inches (15 centimeters) across the valley, but some places got as much as 9 inches.

‘We’re getting a brief break in rainfall today, but we expect it to pick up tomorrow through Thursday,’ Everett said.

To manage all of the water, the TVA will continue storing water in large mountain reservoirs to help reduce flooding downstream, Everett said. The agency plans to adjust its strategy for water storage and flows depending on how much more water falls on the already saturated ground, he said.

Isolated tornadoes and winds in excess of 60 mph are possible in some areas of the South after nightfall Wednesday, the National Weather Service said.

Thursday’s forecast for rain and snow in the mid-Atlantic, Great Lakes and Northeast is seen above

With the weather system moving eastward, West Virginia Governor Jim Justice instructed emergency officials to be ready for flooding in addition to high water that already had led to school closures in the state.

Winter weather alerts are in affect from Kansas City to Syracuse, New York.

On Wednesday, an area of snow, or a rain-and-snow mixture, is possible from north-central Oklahoma northeast as far as western Pennsylvania.

Less than 6 inches of total snow is predicted for most other areas from the Texas Panhandle to the Midwest.

However some 6-plus-inch totals are possible from central Illinois, central Indiana and northern Ohio into the higher elevations of upstate New York and central New England.