Flood chaos leaves thousands without power and homes under water

Weather warnings have been issued by the Met Office as gale-force winds and heavy rain brought flooding to parts of England and Wales, closing a train line, submerging homes and cutting off power for thousands of properties.

Pembrokeshire and Carmarthenshire in Wales saw the worst of the weather with some homes at the Lower Priory area of Milford Haven under 10ft of water and many properties being evacuated as more than an inch of rain fell during the day.

As emergency services tried to ease the flooding more than 1,000 properties were also left without power as thundery showers and wind brought flooding and travel disruption across the country.

Horses and riders from the Lord Mayors Parade head back to stables through torrential rain. On the Strand near Trafalgar Square Central London: Early Christmas shoppers get caught in the rain during heavy downpours in Piccadilly on Saturday afternoon 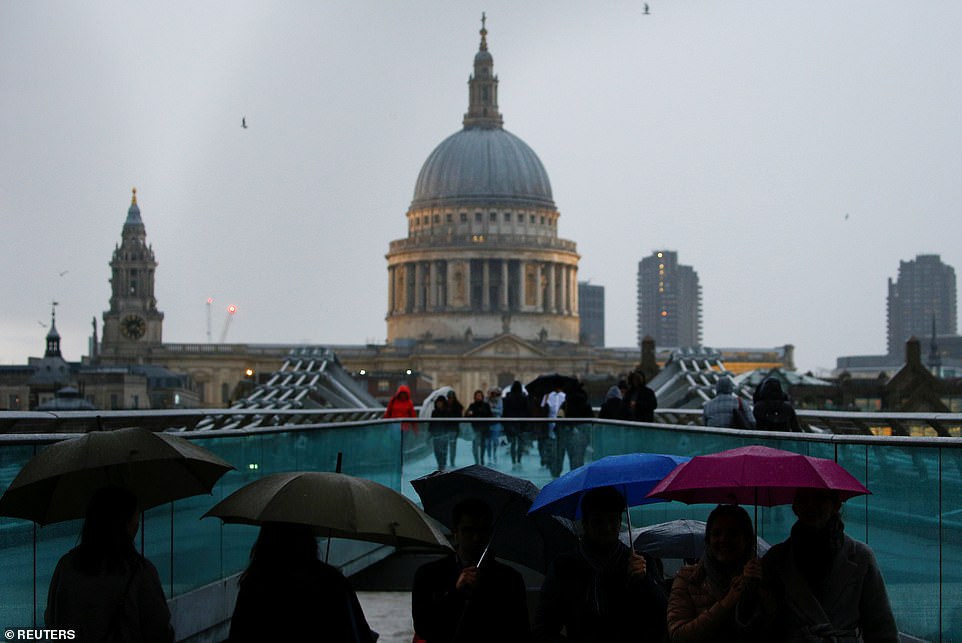 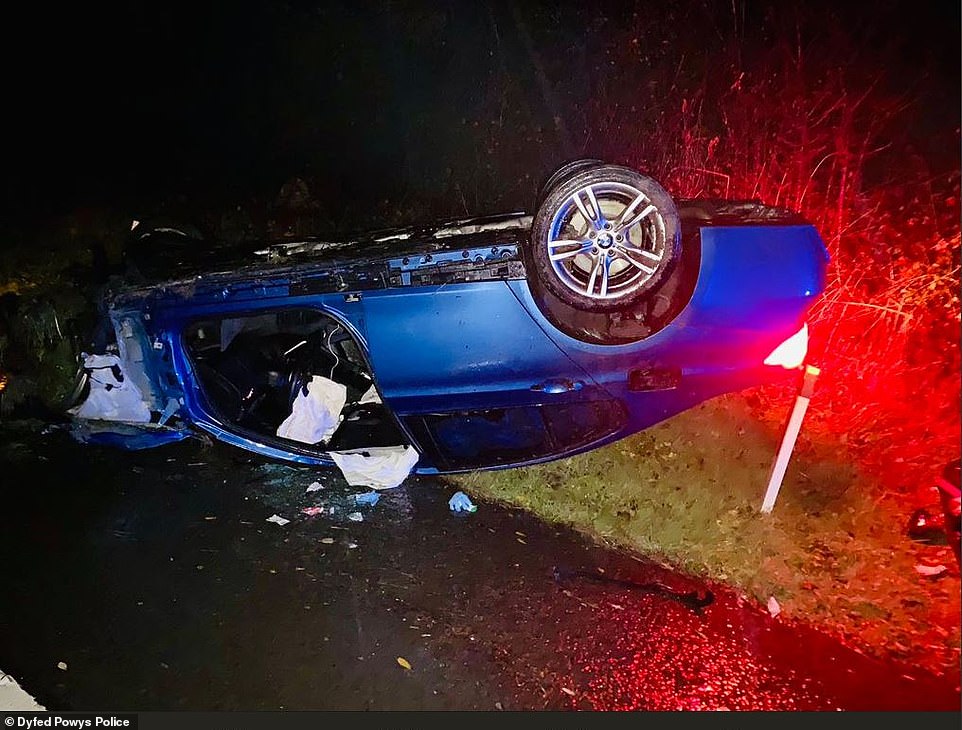 Weather warnings were issued by the Met Office as gale-force winds and heavy rain brought flooding to parts of England and Wales. Pictured: Flooding in Milford Haven, Wales, sees car being overturned due to rising waters 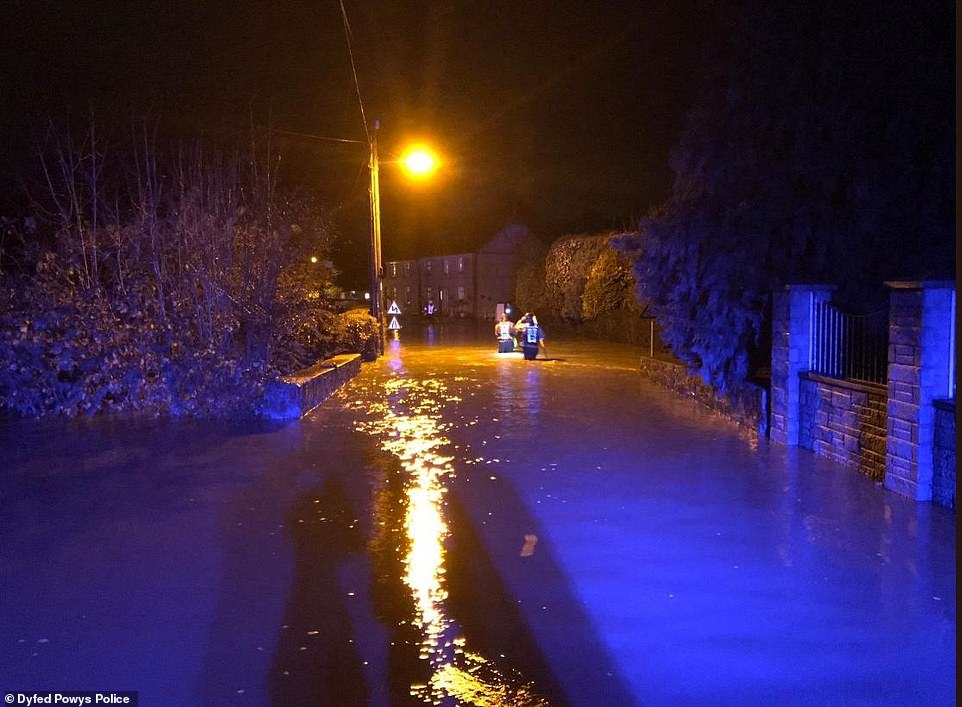 In Devon a combination of high tide and strong winds in Dawlish caused the sea to flood train tracks, while Western Power Distribution said it had 2,500 customers ‘off supply’ on Friday evening.

More than 10 flood warnings and around 60 flood alerts were issued across the south west of England and Wales with an amber warning for heavy rain in place until 11pm last night.

The inclement weather is expected to continue into the early hours of Saturday, which will be wet and windy across large parts of the country.

Met Office meteorologist Alex Burkhill said: ‘It’s going to be a breezy day for most places with showers around for the South and West. 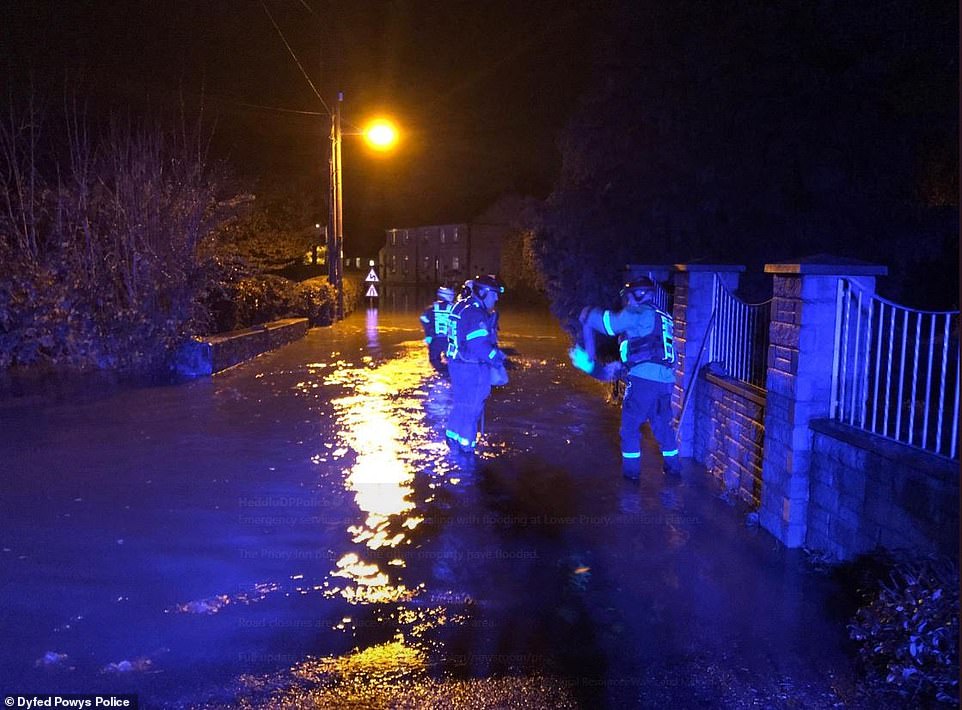 As rescue workers tried to manage the flooding more than 1,000 properties were also left without power as thundery showers and wind brought swept the area 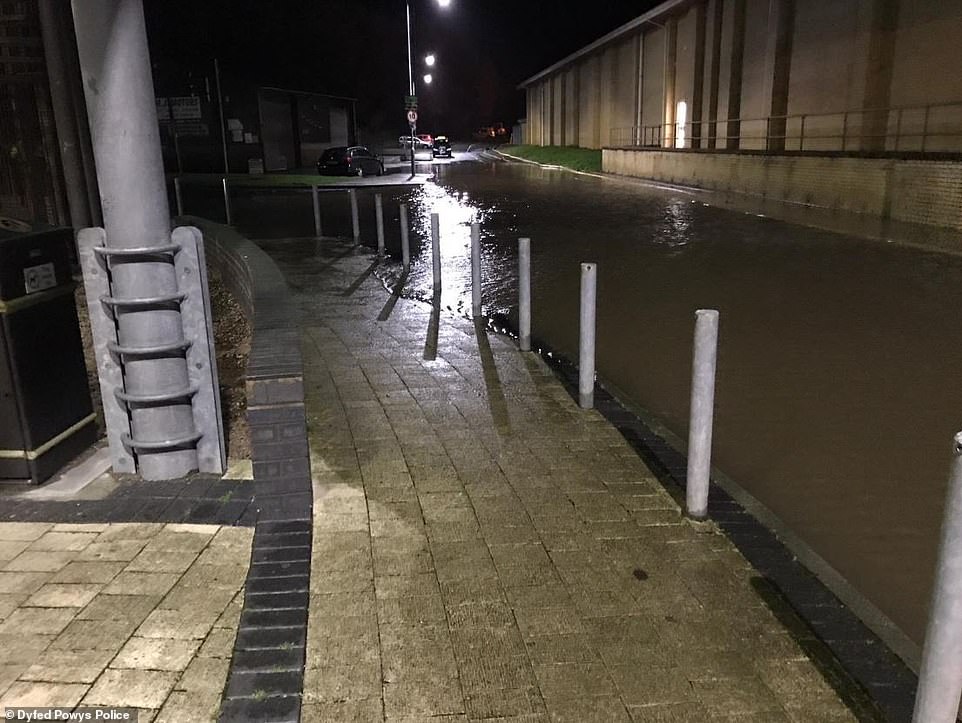 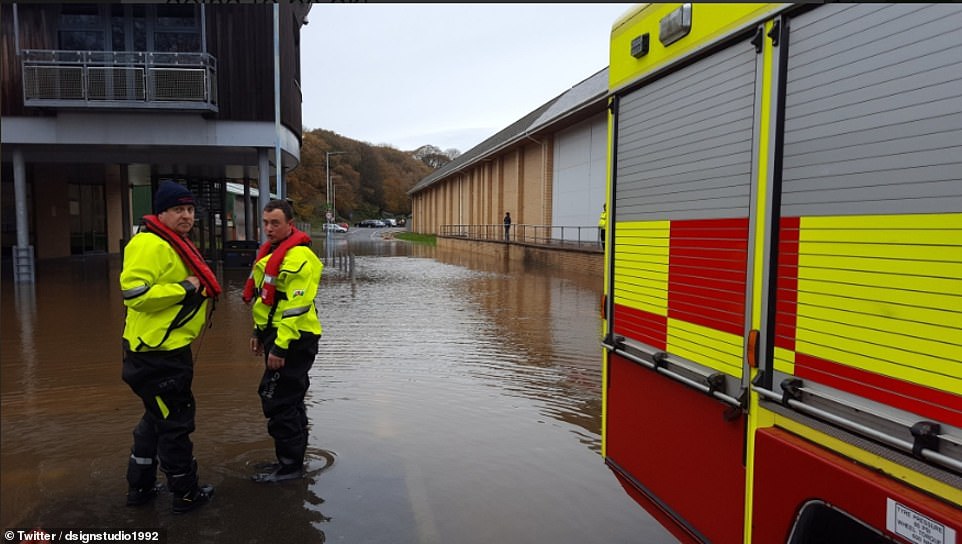 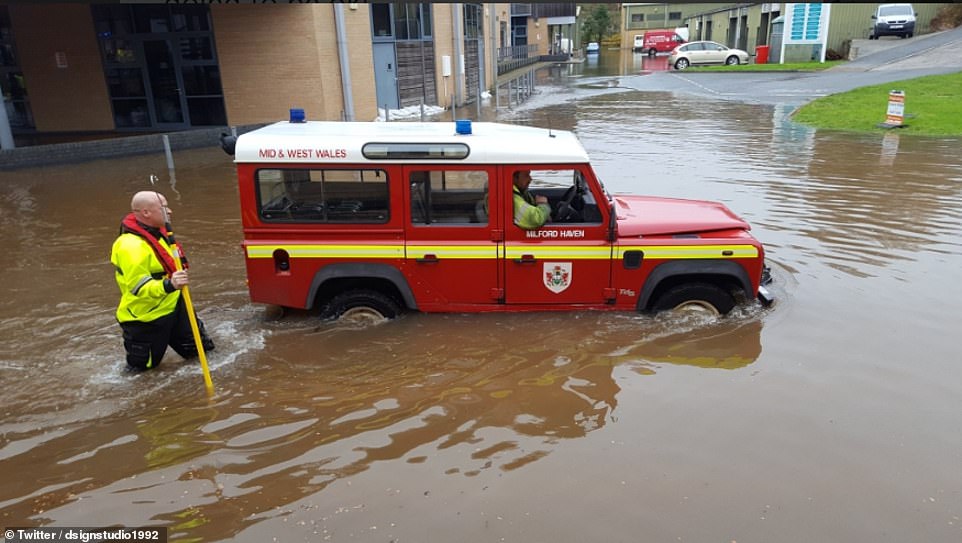 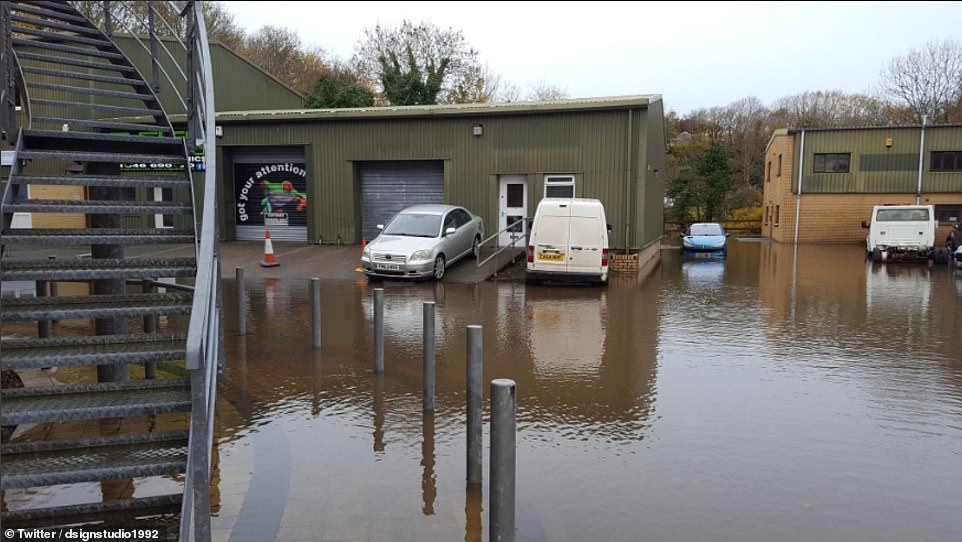 Pictures posted on social media showed the effects of last nights showers, with Pembrokeshire and Carmarthenshire in Wales being the worst hit 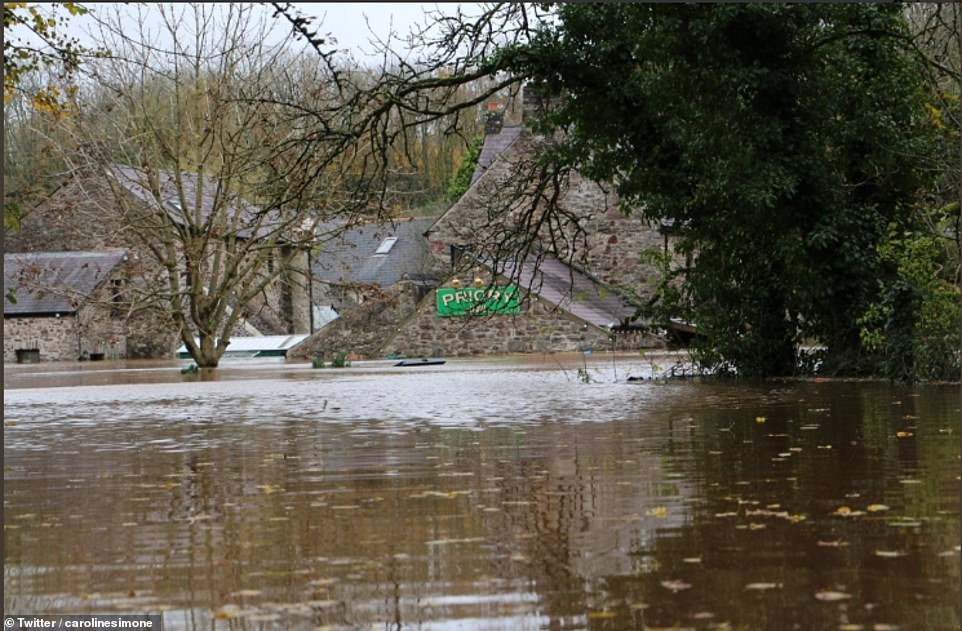 ‘We could get spells of more regular showers pushing westwards during the day, reaching central parts in the afternoon.

‘Those showers could be heavy with a bit of thunder mixed in and possibly some hail. 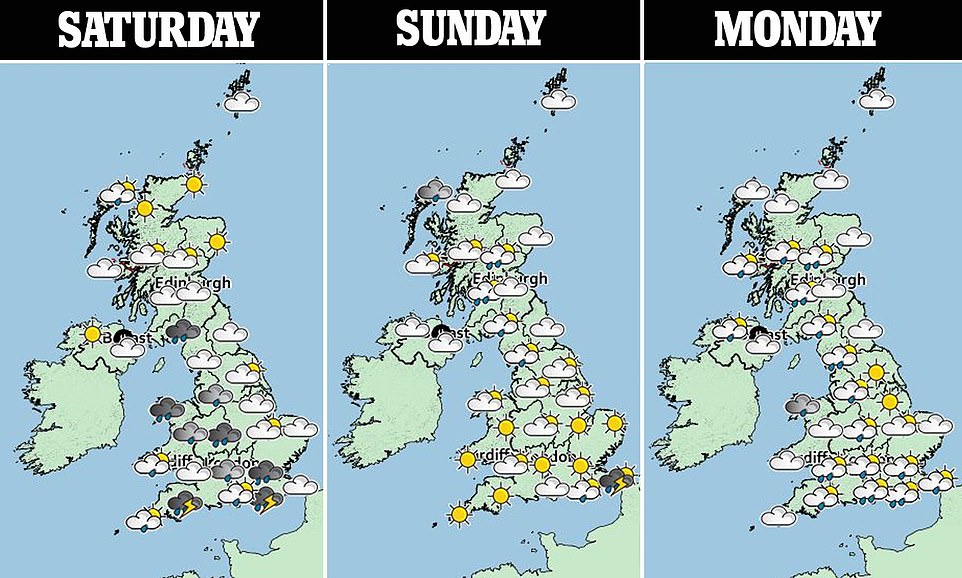 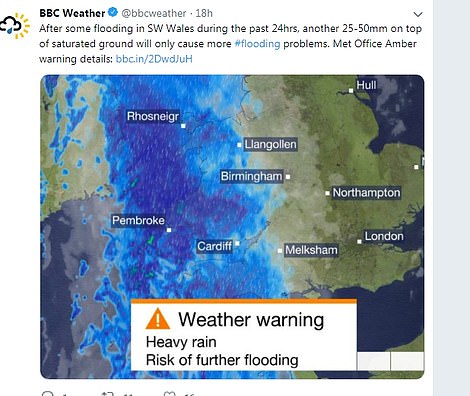 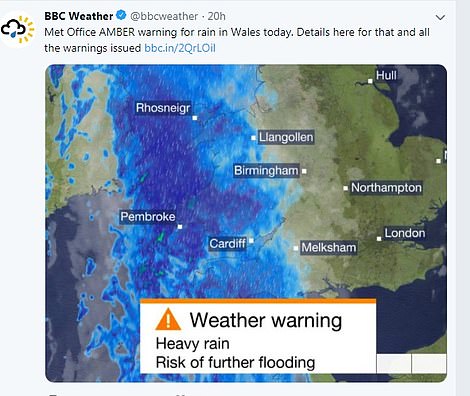 ‘The north-east of England and Scotland could stay dry.’

The fire service were also called to an incident in the nearby village of Fifehead Neville, where a car became stuck in over two feet of water.

Two crews from Sturminster Newton used wading gear and a patient carrying sling to carry the gentleman from his vehicle to dry land.

The driver, who was uninjured, was able to return home shortly afterwards.

During the day, temperatures are expected to remain a few degrees above average for the time of year, although the wet and windy weather will likely make it feel cooler.

Meanwhile lows of minus 1C (30F) or minus 2C (28F) could be seen in parts of Northern Ireland and sheltered glens in Scotland.

Wind speeds hit 68mph at Culdrose in Cornwall on Friday afternoon, while they were still gusting at up to 66mph in the evening.

Images from Dawlish station showed water pouring over the seaside platform and on to tracks ahead of high tide shortly before midnight. 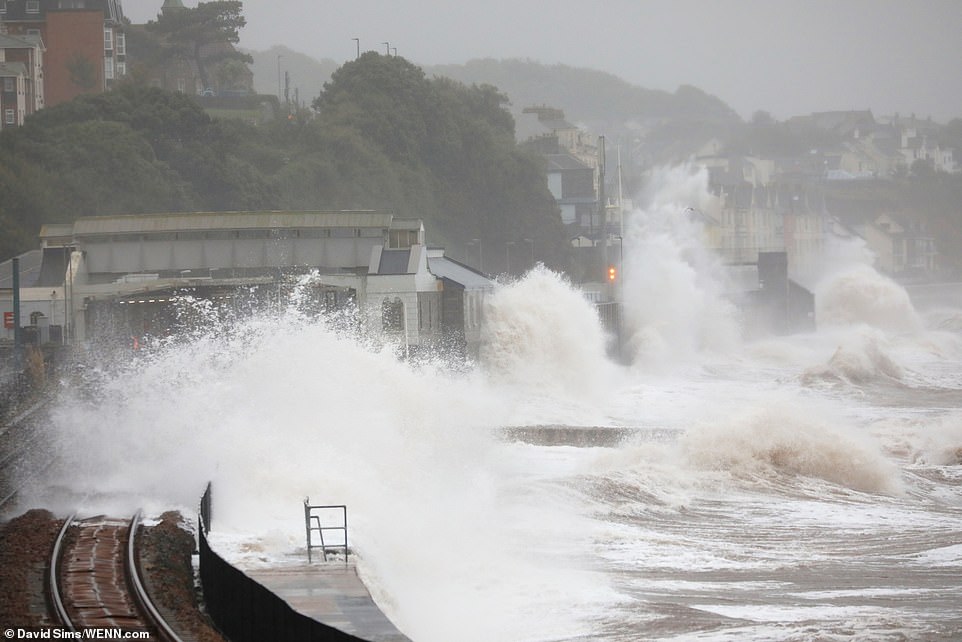 In Milford Haven, Pembrokeshire, streets and homes were flooded as the region saw a second day of heavy rain.

BBC Wales reported five properties had been left under tenft of water after a lake overflowed.

A localised yellow weather warning for rain has been issued for area for most of Saturday.

The flood warnings also come on the eve of the centenary of Armistice, which saw the Lancashire Fusilier along with sister locomotive No.45407 hauling passengers over the 24 arches of the Ribblehead Viaduct in North Yorkshire this morning.

The powerful locomotives, that were seen billowing steam across the viaduct, took eager spectators back to the Great War when such sights were a regular occurrence on the Settle to Carlisle line. 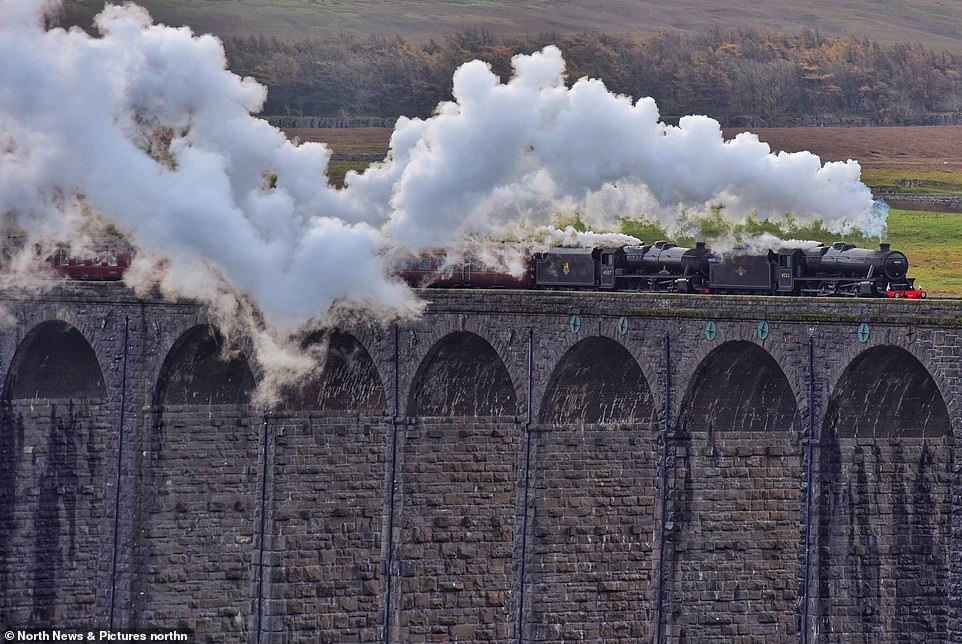 The flood warnings come on the eve of the centenary of Armistice, which saw the Lancashire Fusilier along with sister locomotive No.45407 hauling passengers over the 24 arches of the Ribblehead Viaduct in North Yorkshire this morning